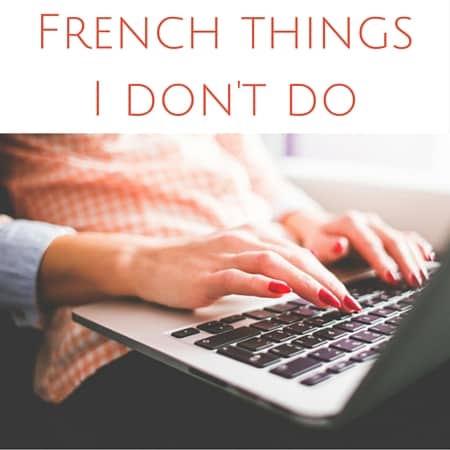 Let’s talk about French habits! Being married to a French guy and all, you’d think that some of his Frenchness would rub off on me. Maybe some of it has but let’s be real. I lived most of my life in the USA, so there are plenty of French things I just don’t understand or do — probably a good and bad thing. 😉

Here’s my list of French things I don’t do.

French habits I don’t do

You can only adapt so much…. 😉 Here’s my short list of French things I don’t do. To be clear, I am always respectful of the French way of life, but when I’m at home and my actions only affect me, I do things my way. I’ll never be French.

I came to France thinking I had to learn everything about France and the French way of life and then do my best to be like that to thrive — almost like I had to copy the French to fit in here.

I stupidly thought I had to dim my spirit and what makes me Diane, and by doing so, it can chip away at who you are.

You can still honor and respect French customs and culture in your own way and be all the happier for it. It’s totally OK to do things your way in your own home.

So let’s get into it:

I’m not a volet master.

I couldn’t care less about whether the volets (French window shutters) are open or closed except when I wake up in the morning and it’s pitch black in the kitchen. I faithfully open the volets downstairs so I can see my coffee cup in the light of day and to let the dog out, but beyond that? I don’t bother with them unless I have to.

The opening and closing is reserved for the French guy. Volets look like hurricane shutters and we’re not in Florida.

Tom sometimes wonders why he’ll walk into a room at night and I’m there with my lamp on in full view of people outside. Why? Because I still don’t register that closing the volets is something you have to do. Blinds and curtains work just fine.

It’s annoying to constantly open and close the windows (especially when it’s the middle of winter). But this is why I have my husband. He opens and closes the volets every day like clockwork and if he didn’t? They’d all be left open 24/7 (and the ones upstairs always are when he’s away).

Note: Read this if you need a refresher on volets >>

I buy a baguette once every other month.

The majority of French people really do buy baguettes daily (or at least several times per week) and the booming boulangerie business will confirm that. But little old me? I spend about 2 euros/month at the bakery on baguettes and only buy them here and there and when my in-laws visit.

The bread is good and all and I enjoy it, but it just hasn’t made it into my daily routine and I don’t go seek out a boulangerie for a baguette every evening because I like other varieties better. I like buying specialty breads though for sandwiches and a nice boule sliced up for toast in the morning. I don’t feel like a meal without a fresh baguette is missing anything.

Tom’s not a bread fiend either so we often go without a daily baguette and we’re both fine with it.

People complain that American coffee is weak, but listen, at least we have options! There’s the “regular” Dunkin’ Donuts-style coffee and espresso and everything else like skinny no-whip one-pump vanilla this and that. I miss Dunkin’ Donuts coffee like crazy.

Now here, if you pop into a French cafe and ask for un café s’il vous plait, you’ll be given a tiny black shot of espresso-strength coffee in a little cup that will take you about two sips to finish. I enjoy that sometimes but when I’m making coffee just for myself at home, I do it my way. A filter pour-over cone that fills up my big mug. Delicious!

Even at my in-laws’ house, when they brew a pot of coffee, it’s so strong that I have to cut it with water and milk. When French people come to visit us, I use my Nespresso machine to make them a little cup of something strong and then brew a pot of my regular coffee that I’ll add milk to.

I guess I’m a tad set in my ways when it comes to coffee.

I know many people love these foods but they just don’t jive with me so I never make them in my own home and definitely don’t order them when out to eat. I wrote about it here. I’m simple when it comes to food and that fits into French culture perfectly. Quality, simple, and local foods go a long way. Besides, many French people don’t eat these French specialties either. 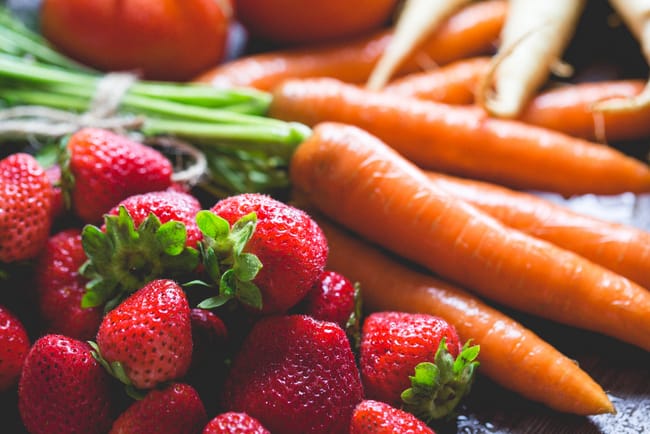 I switch up the order of things at mealtime — on purpose. And eat early!

If I’m cooking at home for myself where no one else is affected, I’ve been known to eat salad before or with my meal (not after, like many French do), and bust out some cheese with the main course instead of eating it after. The order of things isn’t as important to me as it might be to a French person and I do what’s best for my digestion.

The French have a more systematized way of doing things and will usually eat savory before sweet and save the salad and cheese until after the main course. It all ends up mixed together in your stomach anyway, though, right? Also, if I’m home by myself, I generally prefer to eat dinner at 7:30 p.m. or a little before. I go to bed early. What can I say? 🙂

By the way, this is my favorite French mealtime habit.

I don’t pay by check at the grocery store.

It seems like whenever I’m in a rush at the grocery store, the person in front of me has to pay by check. It’s surprisingly common (and not just for those over 70 years old). This grinds the flow of the line to a halt while we all stand there and mentally huff and puff.

To not aggravate the people behind me, I never pay by check at the grocery store and find it so much more convenient to use my card. Didn’t checks die in the ’90s? Not in France! By the way, here’s how to write French numbers.

American habits I lost when I moved to France >>

OK, most of the time I’m 90% there. Really. I make sure to say my bonjours and s’il vous plaits and respect social boundaries and the polite conversational norms. But sometimes my American-ness takes over and I’m curious and ask too many questions.

The French may come across as cold because small talk isn’t a cultural norm in France, but sometimes American-style questions can seem invasive and cross the line into one’s personal sphere (even though this might be normal in the US). What can I say… I’m learning.

Here are some American social norms that don’t translate to French culture.

So there you have it, some French habits I have not picked up. What about you? What French culture habits an etiquette don’t work for you? 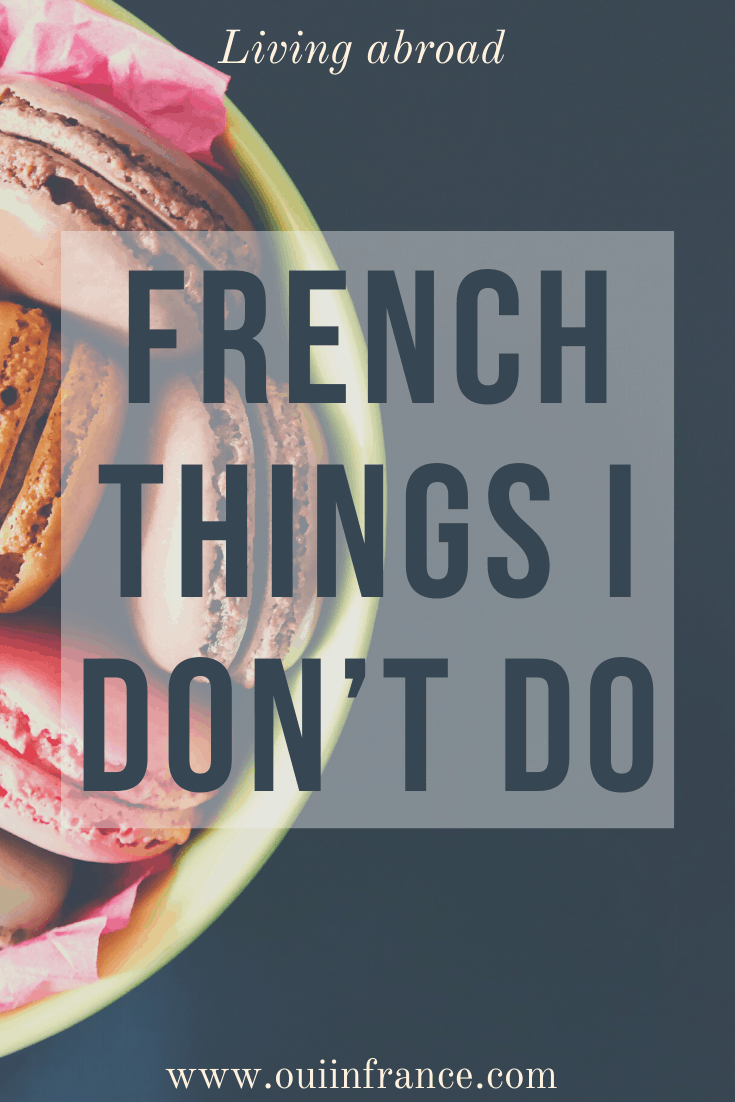 « Having a dog in France vs. the USA
Rituel Studio Paris review: My Xtend Barre class »