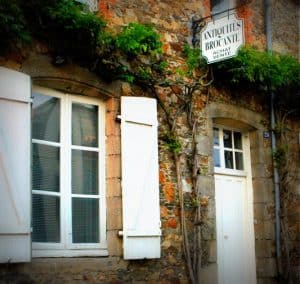 If you’ve spent any time in France, you’ve probably noticed the window coverings that resemble what we call shutters in North America. Except these fancy French shutters for windows aren’t just decorative touches that the French add to their homes to make them look nice. They’re called volets and serve several purposes! What the heck are these French shutters for windows and how do the French use them? Keep reading because the French volets are used differently than how we use window shutters in the US!

Read on for more on volets in France!

French window shutters are a cultural mainstay and one that many Americans may not know much about. Why do French houses have shutters? A perfect example is this experience with my dad.

Innocently enough when he was visiting France for the first time and noticing all the closed up windows, my dad half jokingly asked if France was bracing for a hurricane, knowing full well they don’t have hurricanes here, yet equally curious for my response. And I don’t blame him! Many French window shutters look like the accordion coverings that you’d see in the off-season in South Florida when vacation properties are closed up for the year or when the area is bracing for a hurricane.

Some volets in France are wood and others are metal. Some open in the middle into two vertical panels that can be secured back and others go up and down. Some are modern French roller shutters and raise and lower at the touch of a button and others need to be opened by hand via a rod you turn from the inside. French shutters come in a bunch of varieties at all price points.

Regardless of the type of French window shutters, they are part of French culture and EVERY house and apartment has them. No exceptions. (I liken this to screens on windows in the U.S. All houses have them. In France, no houses have screens!) It doesn’t matter if you live in a French apartment five floors up or a house in the country or city. Les volets are just as normal as having a front door.

The French shutters for windows in the picture above really are quite pretty and well maintained, but many don’t look anything like that and are more functional than decorative.

In most cases, each morning, the volets are opened and each evening they are shut. It’s normal and lets the world know you’re ready to face the day. Everyone does it.

Some people might leave the upstairs volets open all the time (ME ME ME) but the ones at street level always do this little dance morning and night. They open and close. And some even have the ability to be cracked open instead of folded out or lifted up the entire way. In the hot summer months since air conditioning isn’t popular here, some people leave the volets closed to keep the cool air in and the hot air out, essentially leaving them to sit in the dark.

What do the French shutters for windows in France look like and why do French houses have shutters?

There are so many styles but here are a couple of types of French window shutters in my neighborhood: 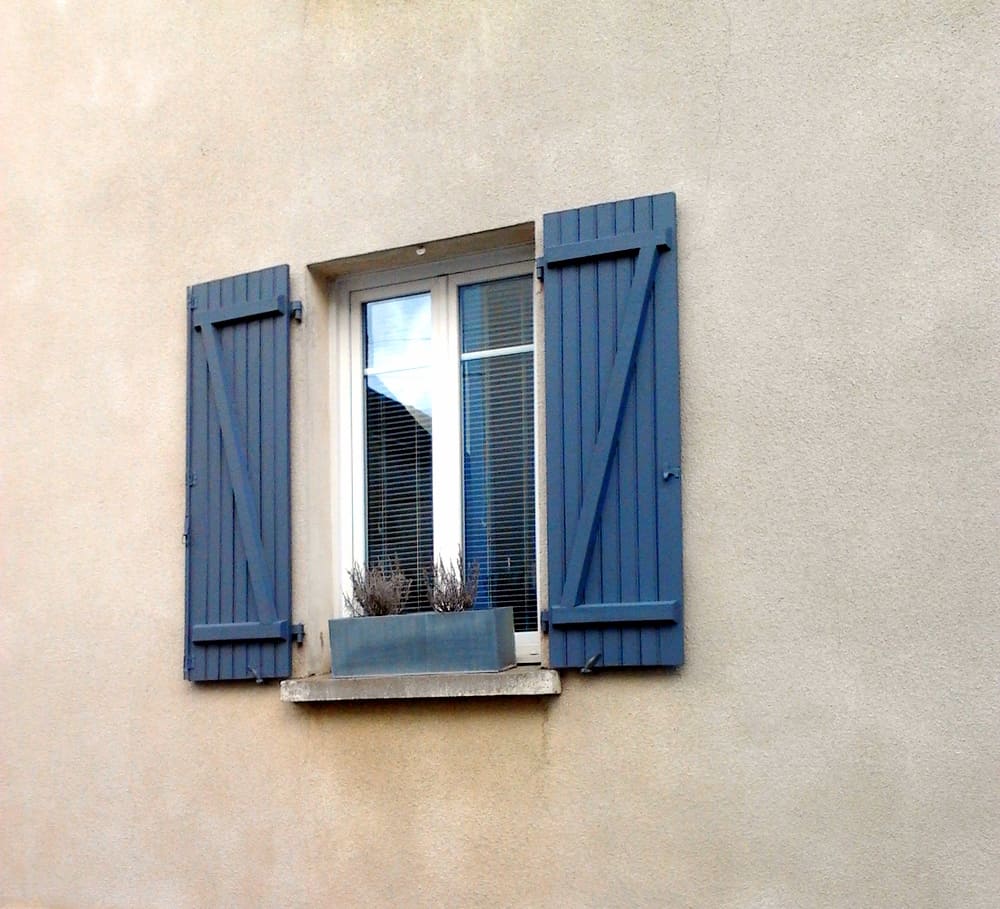 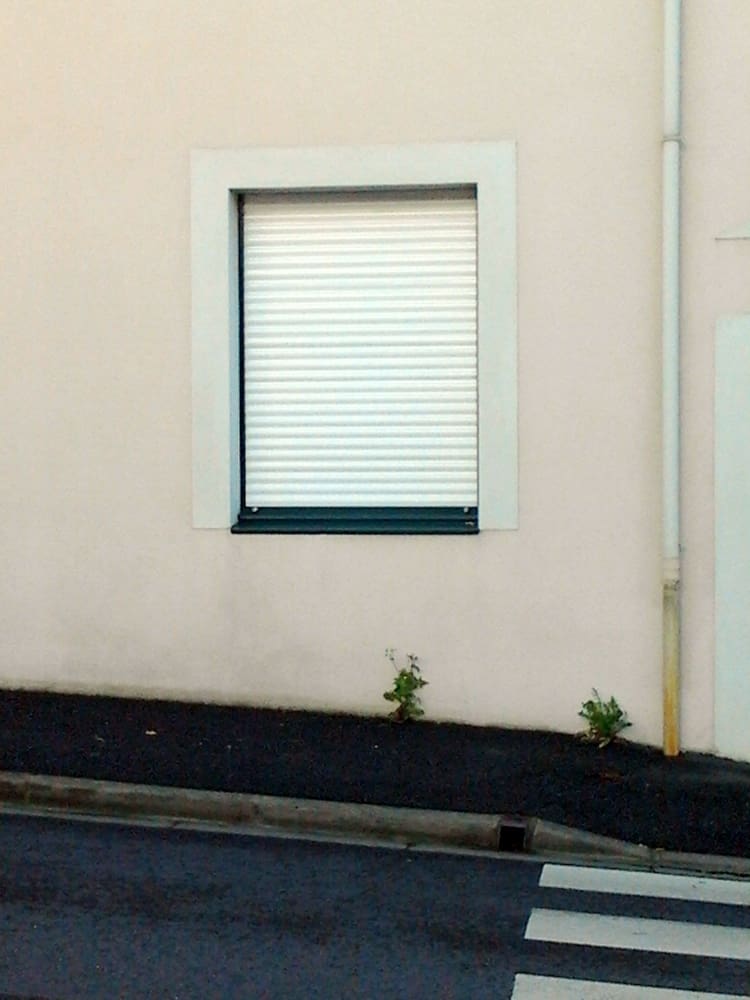 Why do French houses have shutters on the windows?

— Insulation. To keep the heat indoors in the winter and not lose it all through the window. Conversely, the shutters help the cool air stay inside in the summer and keep the hot sun from warming the interior of the home when it’s sweltering out. Many older homes still have single-pane glass but double seems to be the norm in newer homes.

When I asked about triple-pane glass (normal in the US for newer homes), it seemed to be a rarity here. So when the sun starts to go down in the winter, it’s time to close up your volets and conserve the heat! They serve a similar purpose in the summer since most homes do not have air conditioning. But if you have the kind of shutters that you have to actually open to the outside air to open and close, you let some cold air (or hot air in the summer) in each time you do so, and bugs, if that’s a problem in your area.

— Protection. Volets in France help protect the house from the elements. In a rain or wind storm, just close your volets for some added protection. Some also close the volets to block the sunlight. And a major pet peeve of mine is when the volets are half up. I understand it but either open your house up or don’t. No half-ass shutters, OK?

— Security. Closing your volets at sundown lets the world know that your house is secure and ready for the night. No one can break in through the window and rob you if it’s covered by sturdy volets. It’s one added barrier that a thief would have to deal with, so having secure, sturdy volets that shut at nightfall means a secure house.

— Privacy. Want to make sure no one sees into your house? Just shut the volets and no one passing by can peer into your home. I find many French homes don’t have extensive window treatments, so when the shutters are open, it’s quite common to see into people’s homes.

Personally? I’m a fan of blinds and opaque curtains. They keep the sun out of your eyes and keep nosy folks from peeking in and seeing what you’re doing. Many window treatments will block the sun and private privacy without blocking the light so we aren’t sitting in the dark and required to turn on a light. It’s just a cultural difference.

Anyway, our house wouldn’t be French if it didn’t have volets. As I mentioned, it’s just part of French culture and EVERY house has them. We have two types at our house: old fashioned ones that you have to open the window to the outside to open and close the shutters and one set downstairs that you can lower and raise from inside via a rod that you turn without opening the window itself.

Although some volets are more charming than others, they aren’t super attractive. French window shutters remind me of a store in the mall closing for the day, when that ugly barricade rolls down to say they’re closing up shop.

Not all volets are ugly, not at all, and I understand their role in French culture and the purpose they serve, but they’re just not part of American culture and therefore I find them a little foreign. Because to me, they are.

Closed volets look cold and so uninviting to me. That’s sort of the point. But I don’t like it. And about the light — I don’t want the light blocked out of my bedroom. I hate sleeping in pitch black because the natural light at sunrise can’t wake me up if the windows are blocked. And I like waking up early. But for Tom? God forbid if there’s even a crack of light in our room at night. He can’t sleep! We compromise.

So French window shutters are kind of WTF for me. Take ’em or leave ’em. I’d leave them up all the time if it were up to me. I think they’re a little weird. If you’re concerned about heat loss, get better windows. If you don’t want light coming in, get some opaque curtains. And if you are concerned about your security, get an alarm system.

I’m half joking. I get their purpose. I get it’s the culture. They just remind me of that Al Pacino movie in Alaska (Insomnia) where they had to block the 24-hour light at night to sleep. But here in France, that’s not a problem since it gets dark and all and we don’t have 24 hours of light or dark. But in case one day the sun decides to NOT set, we have our volets! We’re ready!

In all seriousness, French window shutters are just part of embracing the culture here and aren’t a big deal. I really don’t mind opening and closing French shutters at this point because I’m used to it. It’s almost become (gasp!) normal! And if they’ll help conserve heat and keep us safe, cool. But if I had a budget to buy new volets, I’d definitely get the most inviting-looking and automatic ones possible that are on a timer with a button — not hurricane style! 😉

What do you think of French shutters for windows in France? Are you a fan of volets?