The other day, Dagny and I were out for one of our many walks around the neighborhood and came across a little unleashed dog in the middle of the road who seemed to be alone. As we crossed a busy street to get closer to this dog on a nearby side street, I realized he was walking briskly right into the path of an oncoming bus that was barreling down the avenue. I scrambled trying to think how I can best get him out of harm’s way right when a voice called, “Fifi!! Come!” from behind one of the vehicles on the side street. Crisis averted, I thought. Sort of…

What happened next?? GO!

A loose dog roaming around isn’t a rarity in France. In fact, I probably see this two or three times a week! And although it bothers me (hello people — there are things called CARS and kidnappers not to mention all sorts of other trouble a dog can get into on his own), I try to focus on keeping my dog safe because that’s within my control. I can’t save the world. But we do have an obligation to our pets to protect them and train them and make sure they are out of harm’s way. Anyway, when I see a random dog walking toward a busy road, of course I will do whatever I can to make sure everyone’s safe.

So back to the story….

When this man, who seemed to be cleaning out his garage with his wife, called his dog back onto his property, I wrongly assumed he’d leash the dog up or put him inside. Anyway, I told him his dog almost got hit by a bus but he was too busy cleaning his garage with his wife to really care. So we continued on our way and about three seconds later, the dog reappeared from his garage and crossed the side street (didn’t look both ways first, since dogs often don’t) toward us.

He seemed friendly enough at first and started sniffing Dagny but while emitting a low growl.

The man came out from behind his van again and called the dog but it made no difference because this dog was in the middle of a growling sniff fest. The owner didn’t seem all that bothered, but I didn’t like this situation at all so I went down to pick Dagny up so we could move along. In that moment, the dog lunged at Dagny and bit her butt three times. Before this could escalate, I raised my voice at the dog and said, “YOU DO NOT BITE MY DOG. GET OUT OF HERE!”

I picked up Dagny and my heart was racing. We were both shaken. Luckily, the dog’s bites seemed to be just nips and nothing serious but I was annoyed. I comforted Dagny hoping the owner would utter some sort of apology and at least put a leash on his dog. But no such luck.

Instead, the man said very nonchalantly from across the street, “Oh, it’s nothing. She’s fine. Fifi, come on!” I responded, “No sir, it’s not fine. Your dog bit my dog.” 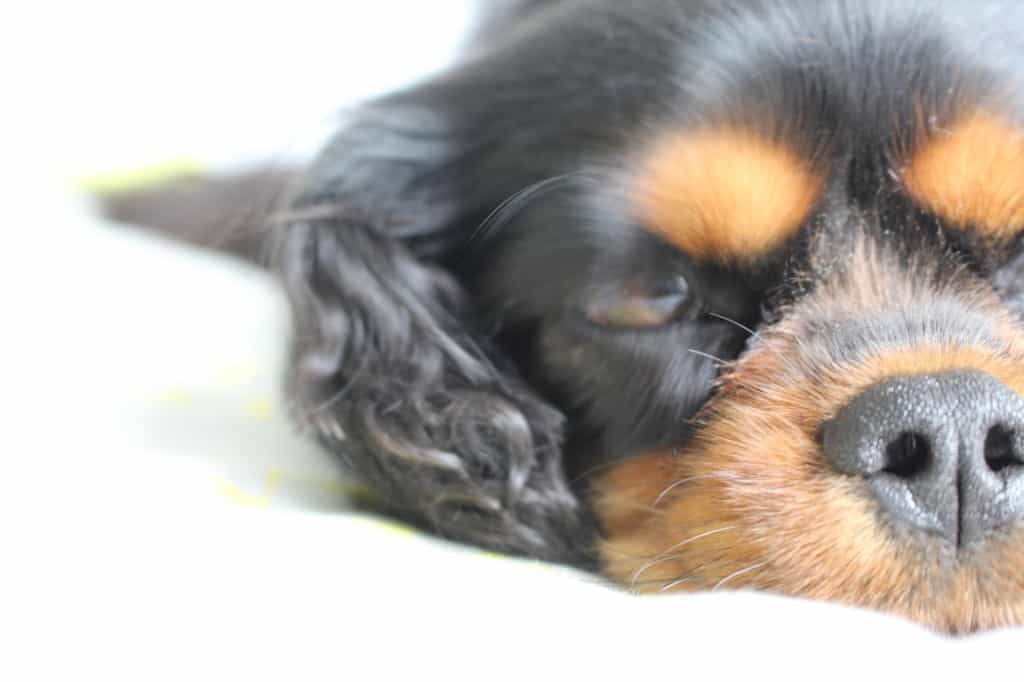 This pic I took of Dagny sleeping has nothing to do with the story. Just melts my heart though.

He brushed me off and I figured before any heated words are exchanged, I’d best be on my way. So Dagny and I continued on — her tail wagging (a good sign). And then once I had a second to clear my head, I looked back at the house (dog was still roaming around) and realized….. wait for it… it was Tom’s boss’s house.

The man was Tom’s boss’s husband and his boss was the woman in the garage who had taken the day off. Dammit.

Out of all the people I could have gotten into an altercation with, it was Tom’s boss’s family. Of course it was.
Now normally, I wouldn’t care what was said because I did nothing wrong at all. In fact, my response was pretty tame and things could have been, much, much worse. Besides, we’d never met, so how would they know it’s me? Oh yea, we’re in France and I’m the only one in the area whose accent is NOT North African. His boss is no dummy so I’m sure she could put two and two together — she knows we live in the neighborhood.

Thankfully, we got off easy. The dog could have seriously injured Dagny or gotten hit by the bus. I could have said a lot more than I did. But I kept my cool except for yelling at the dog (in an effort to protect my own). And so far, the boss hasn’t mentioned this at work. And Tom still has his job… hoping it stays that way!

Ever have an altercation with a neighbor over their dog?

Dagny finds the weirdest things on walks… what the heck is that thing?

Pet culture in France vs. the USA Tips on getting a lost dog to safety (and how Dagny saved the day)

Having a pet in France Part 1: Going to the vet

« We found pumpkins! (and a potimarron)
New House WTF #2: French shutters for windows? »