The French love their pets — no one will debate that. But when loose dogs roam the streets, either because they’re lost or just out for a careless stroll, it seems that passersby don’t really seem to care. So earlier this week when I was out walking Dagny, we came across a soaking wet Bernese Mountain Dog who appeared to be lost. And because I’m the type of person that always helps, I couldn’t just turn my back on him and let him fend for himself and probably get hit by a car. I used Dagny to help get him safely to the neighborhood vet. And yes, this story ends well.

Here’s how Dagny and I helped… and my tips on getting a lost dog to safety.

Helping a lost dog to safety

I recently wrote a post on whether or not it’s our duty to get involved in situations that warrant a closer look (like on the TV show What Would You Do?). In France, the situation that I come across the most often that begs for my help is a loose dog without an owner in sight. Sometimes the dog darts off before I can get a closer look and sometimes the dog comes right up to us wagging his tail.

Dagny and I normally go out late morning for our walk and did so Monday after the rain had stopped. On our route behind some neighboring apartment buildings, we came across a wet Bernese Mountain Dog who was lying down. If you’re not familiar with the breed, they’re gorgeous dogs with an adult male weighing in at 80-90 pounds or more. I figured his owner was just around the bend so didn’t think anything of it, but the dog approached us wagging his tail and I could see in his eyes he wasn’t a threat, although at first I was a little apprehensive due to his size. He sniffed Dagny and was very fixated on getting to know her so he followed us as we walked along.

I asked a woman who lived in the building if she knew the dog but she did not and couldn’t have been bothered. That was the sentiment I got from everyone I asked.

I didn’t have a second leash on me, and knew that if I ran home to get one, he could wander along further and get hit by a car. So knowing time was of the essence, I thought on my feet and figured I’d use Dagny to lure him along (since he was very interested in her) for the five to ten minute walk it would take to get to the vet in the neighborhood where they could scan him for a chip. Because I knew it would be a risk due to all the cars , I decided to get in the road to stop traffic after seeing our gentle giant frantically dart across traffic once after hearing a car beep. Yes, I got in the road and stopped cars while getting our friend to follow Dagny so we could safely walk to the vet. But as we got there, he heard a noise and refused to enter the vet clinic and ran back toward the road.

Long story short, a man walking by helped the vet tech and me corner the dog and we gently got him to run back inside the vet clinic and away from the road. Once inside, we were able to get a leash around his neck and scan him for a chip which we didn’t find.

I gave my info to the vet and asked her to call with any news. All of this took about an hour. 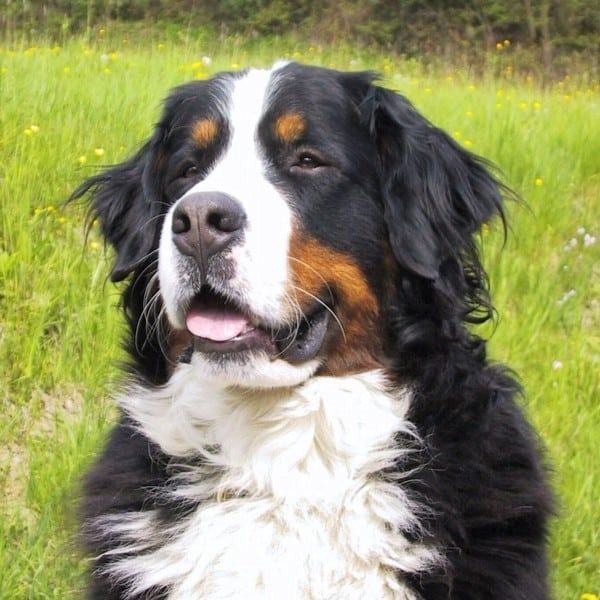 If I had ignored this sweet dog (similar to the one pictured above), I’m sure he would have gotten hit by a car. There are several busy roads near where I found him and it was a miracle that he made it that far unscathed. People just don’t place a high enough value on pets and I’m not sure this is a cultural thing.

Plenty of Americans would ignore a wandering dog in the street too but I’d like to think that we care enough as a society to help those that cannot help themselves.

One day the shoe will be on the other foot and your dog will be missing. Wouldn’t you want someone to care enough and take the time out of their day to help?

While many don’t view humans and dogs on the same level, let me ask you this. If you were driving or walking along and a toddler ran across the road with no guardian in sight, you’d stop to help, right? Suddenly you want to get involved, magically found the time and it becomes your place to help. For me, a loose dog is exactly the same. I stop and help. Every time. Both dogs and kids are living beings that need our help before the situation gets dire.

I feel very strongly about animals — maybe because Dagny is pretty much my everything here — and I don’t understand people who just don’t want to get involved and walk on past a perfectly friendly animal that is clearly lost and NEEDS HELP. To be clear, I’m not advocating putting yourself in danger. If the dog appears aggressive, call for help. But don’t just stand there and do nothing.

Here are some tips if you come across a loose dog and need to get it to safety:

1. Don’t put yourself in danger. Wanting to help isn’t worth getting hurt yourself. If the dog seems aggressive or mean, it’s best to not approach him directly. Call your town’s animal control or vet to get assistance.

2. Go with your intuition. If a dog appears friendly and your gut says to stop and see if you can help, don’t think about it further — just stop! By the time you go back and forth with yourself on whether you should stop, the dog might get hit by a car or run off. Go with your gut. The same goes with a dog that doesn’t appear friendly. If your intuition is sending up red flags, don’t approach!

3. Don’t make any quick movements. Even a nice dog can spook or become aggressive if he feels threatened or cornered. Stay calm and patient to keep everyone safe as you gently put a leash on him and/or guide him to safety.

4. Carry an extra leash. You never know when you’ll need it. Maybe yours will break or you’ll encounter a loose dog. Better safe than sorry.

5. Carry emergency numbers with you such as animal control and the local vet. Again, you never know when you’ll need to make a call.

Shortly after we returned home, my phone rang. It was the vet telling me that she scanned the dog again and was able to find a microchip with the owner’s information. She called him and apparently the dog was a bit more excitable than normal due to a neighbor’s dog being in heat, so he destroyed the fence and had escaped that morning. The vet asked me if she could give my information to the owner since that’s normal protocol, so he could properly thank me. I said of course. But it’s now several days later and I haven’t heard a peep from the dog’s owner. But that’s not what’s important. Dagny and I made a difference in that dog’s life whether he knows it or not, and for that, we can’t help but be proud.

Why do dogs roll in dead animals and gross stuff? Let’s ask Dagny