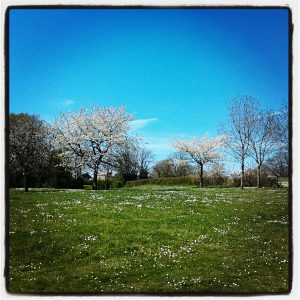 Yesterday was a beautiful day. And Dagny noticed too. So like we do on most beautiful days, we went for a walk. It was early, so I figured I’d let her off the leash to run around a little behind my in-laws’ house where there’s a big field and a lake. This has never been a problem before. What did Dagny find?

And why do dogs roll in gross stuff? Read on!

Right when I let her off the leash, she dashed through the bushes which she sometimes does and I took the long way around. Dagny was running like a crazy and enjoying the sun. At this point, I was just rounding the corner and my view was obscured by the bushes. I only saw her tail wagging back and forth. I thought maybe she found a doggie friend? Once she fully came into view, I knew it couldn’t be good. A very happy Dagny was rolling all around on her back, tongue out, smiling, with her feet and tail going in all directions, so proud of herself. I’ve only ever seen her do this with earth worms after it rains.

To my horror, I saw what was underneath her. A big, dead, STINKY fish. I guess a dead rat could have been worse, but all things considered, her timing was terrible. We had an appointment at the bank in 20 minutes! 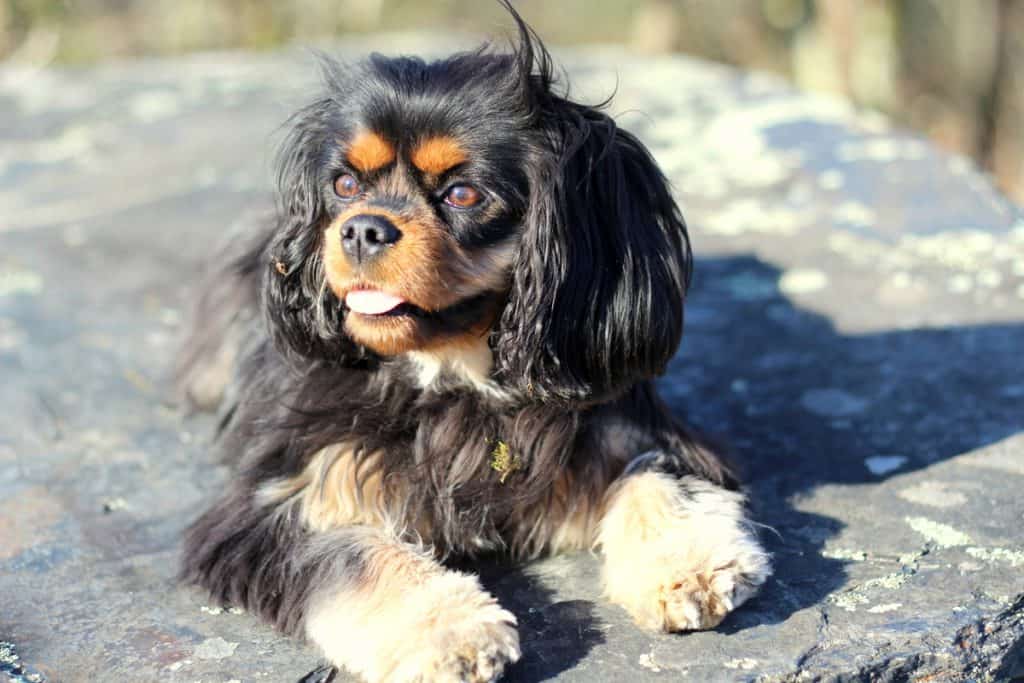 Why do dogs roll in dead animals ?

Time out, let me explain a thing or two about Dagny. LOOKS ARE DECEIVING. She is a one and a half year old Cavalier King Charles Spaniel who looks like a pretty little princess and not a fishmonger. She has long, soft fur and looks more like a dainty little thing than a burly hunting dog.

But don’t let her fool you. She enjoys barreling through the forest hot on the trail of birds and getting her feet all muddy just as much as the next dog. So when her expert sniffer led her right to the dead fish, how could she resist?

She didn’t. Of course she didn’t.

I didn’t even have time to snap a pic of the offensive fish that was about 12 inches long and cut in half, so all the yummy yuckies were oozing out. I got Dagny off of the fish and she just looked at me like “What? That was awesome.” What wasn’t awesome was that people in the neighboring town could probably smell her and the fact that we had an appointment with our bank in 20 minutes.

I put her in her crate upon returning home and poor Tom’s parents took it upon themselves to bathe her. Bless their hearts. Really. I’d better find a really nice gift for next time.

Here’s a pic of Dagny after her bath while she was drying, really not understanding what she did wrong. Oh, silly dog! I asked her, “Why do dogs roll in dead animals like fish?” and she had nothing to say for herself. 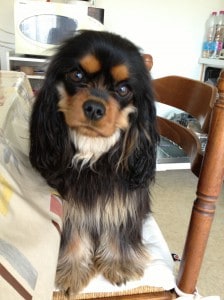 Why do dogs roll in dead things like fish, rats, and worms?

The ASPCA has a few theories on this strange but common dog behavior:

1. Dogs roll in disgusting stuff to mask their natural scent, allowing them to camouflage themselves and be sneakier hunters.
2. Dogs cover themselves in the nasty smell to tell other dogs about what they found. (When other dogs sniff your pup, they’ll get the exciting news that there’s a dead animal in the neighborhood.)
3. Dogs love to roll on gross things to claim them as their own. They don’t want competition!

Why do dogs roll in gross stuff? In our case, I think she just loved the smell and it was probably a combo of all the instinctual reasons above.

Tell me — what’s the most mischief your dog has ever gotten into?

So there’s the answer to why do dogs roll in dead animals. Ugh!

Raw diet for dogs: Why we made the switch with Dagny

How much does a raw food diet for dogs cost?