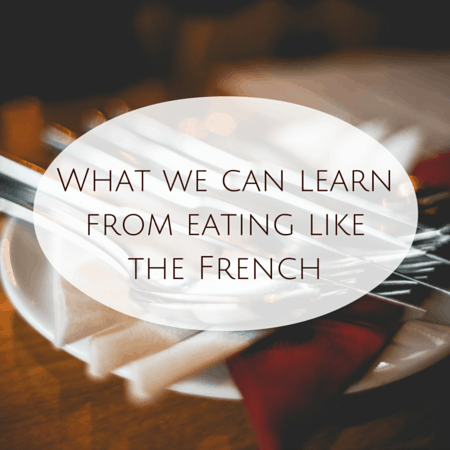 If you mention France to someone, one of the first things that will pop into their head will surely be food. Maybe it’s a baguette or croissant or French cheese or just French food in general. France is a country that wholly appreciates mealtime and food, and the longer I live here, the more I see that first hand and appreciate all the good food myself. But what can we learn from eating like the French? A whole lot.

I’ve told you all about macarons, why you won’t get fat in France, and tips for dining out…. but what about the things we can learn from French mealtime culture? And how do the French eat?

Even if you’re only in France a short time, you’ll take note of the French way of life when it comes to food.

One thing I’ve noticed about the French that ties into food culture is the fact that there are far fewer obese people in France than there are in the US. That’s not to say there are no overweight people because there are a bunch of very unfit, heavy folks walking around. But truly obsese? I can count them on one hand and I’ve lived here over 3 years…

France has the lowest obesity rates in Europe. To give you exact figures, 38.5% of men and 26% of women in France are considered overweight (it’s about double that in the US). And in the US, nearly 35% of adults are obese. Yikes!

Please note: I’d like to point out that not all French people eat the way I describe below. Like Americans, the French are a diverse bunch and everyone his their own habits, dietary needs, preferences and routines. Like me, for example — you’ll never find me chowing down on a hunk of horse or giving up snacking in this lifetime.

That said, many French people fall into the eating habits I’ve outlined below but many don’t. So please keep that in mind as you read. I try not to idealize the French way of life too much because it’s not one-size-fits all across the board and eating like the French isn’t necessarily better for everyone.

So let’s look at the cultural differences when it comes to food.

Here’s what we can learn from eating like the French: 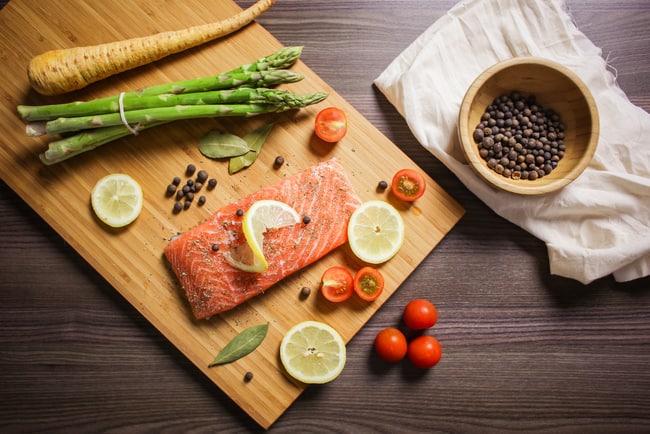 The French enjoy preparing fresh food at mealtime. This isn’t to say that the French don’t eat packaged foods because trust me, they do. But buying fresh produce and then swinging by the butcher to pick up some meat is a tradition that lives on. Many French people buy their meat and fish at the grocery store as well because it’s just more convenient. In general, meals tend to be fresh and not from a can or package. It’s easy to buy fresh when market culture is so strong!

10 Tips for not embarrassing yourself at the French marché >>

In the US, a busy school night dinner would be an afterthought or a meal quickly thrown together that we had to scarf down before heading out somewhere. Not so in France. The French view mealtime as an event to be enjoyed and a reason to slow down. It’s a social occasion to be with family and friends and the focus is on the meal itself. That’s not to say that the French never eat in front of the TV or grab something on the go, but generally mealtime is taken seriously. 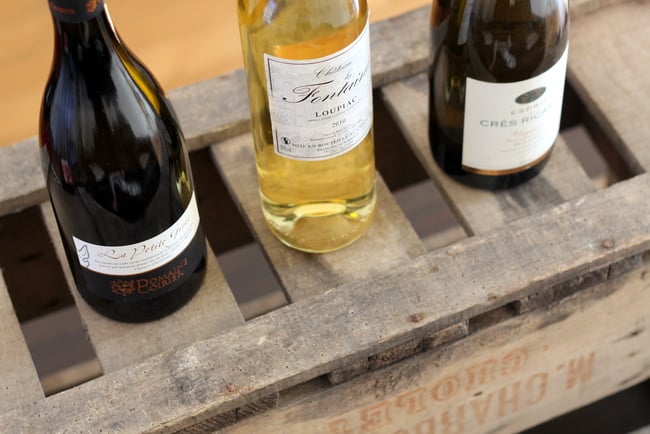 Don’t forget the bread and wine.

Every meal needs bread and wine or it’s not complete (half serious). Keep in mind that not every meal is an extravagant feast but a simple baguette and glass of wine are par for the course when eating in France. Baguettes aren’t just a stereotype — the French really do buy a fresh baguette daily! Use your baguette to sop up sauce from your meal or save it to eat with some cheese. It’s never slathered with butter, though. But hey, if you like butter on your bread, go for it!

Baguette etiquette: What to do (and not do) with your bread >>

Dessert is the perfect way to end a meal — every time. The portions tend to be small and delicate and even if something decadent isn’t on the menu, a simple yogurt or fresh fruit will do. But a meal isn’t complete until dessert (and a coffee in most cases) is served. The French don’t feel guilty when they eat dessert. It’s a normal part of the meal, but do keep in mind that portion sizes are probably smaller than what we’re used to in America and a rich dessert isn’t a daily occurrence. Sometimes a piece of fruit is all that’s needed. Strangely enough, French desserts are satisfying and I never find myself wanting more.

The French seem to switch it up when it comes to their main dishes at dinner. I’ve had varieties of fish and meat I’ve never had at home and while I don’t like everything, I can at least say I tried it. Pigeon, I’m looking at you. 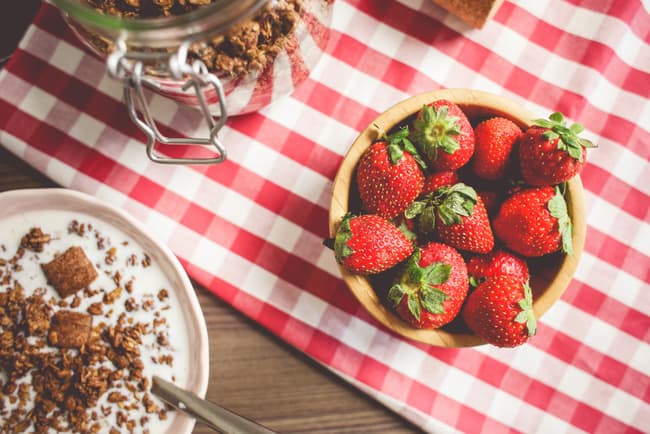 Trying to find strawberries for your chocolate-covered strawberries in the winter is nearly impossible in France. Most grocery stores don’t import off-season vegetables and just make do with what’s in season. The French are masters at taking advantage of the produce in season. Recipes with cherries are popular in June, not in December, and clementines aren’t usually found in the summer. You begin to look forward to buying seasonal produce and working with what’s available. It’s for the best.

I love snacking. I’m not saying I chow down on Snickers bars and chips when my stomach starts rumbling at 4 p.m., but a healthy snack here and there is part of my daily routine. This isn’t the case for most people in France (aside from le goûter, usually a sugary treat for kids) and the French are even told NOT to snack. They tend to stick to mealtimes and you’ll even see a little line of text on TV ads or on packages that tells people to avoid snacking. But if it’s healthy and works for you, why not?

The French tend to eat something sweet for breakfast like a pain au chocolat or Nutella on bread or something similar and it’s usually small. A black coffee is quite normal too. Now of course many Americans do the same thing and eat a donut or a bowl of sugary cereal. But the difference is that in the US, many opt for a healthy breakfast or a savory meal like eggs. In France, scrambled egg whites and turkey bacon in the morning would be very strange. 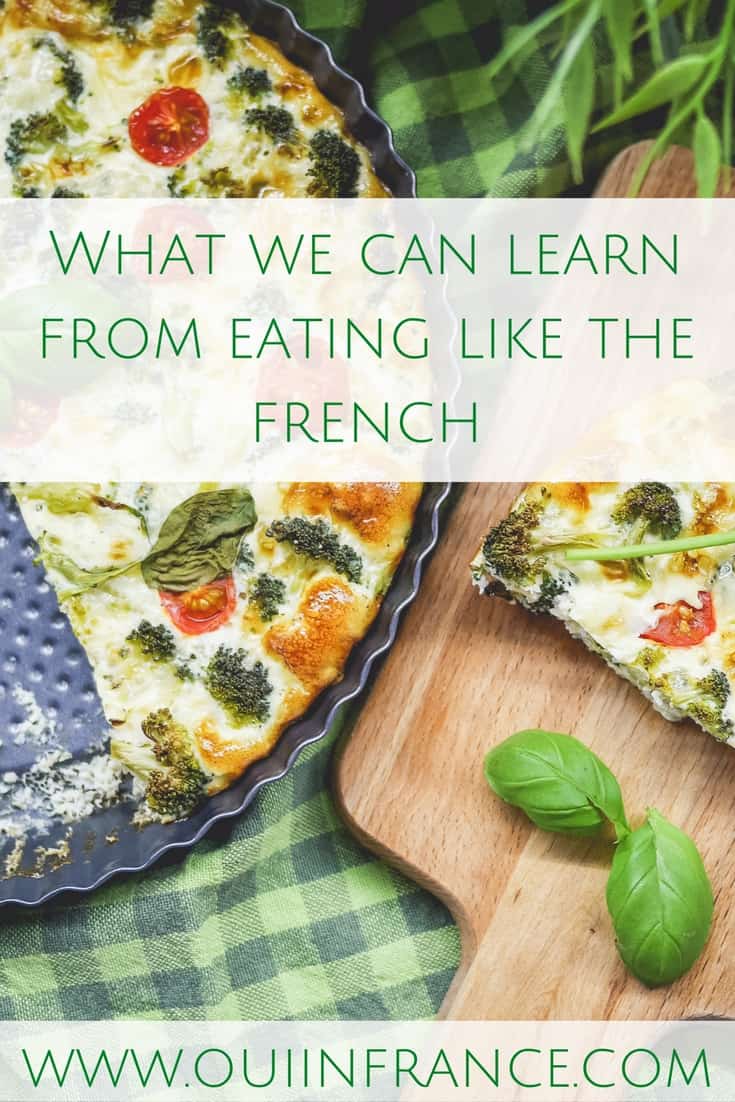 French eating habits: How my American mealtime habits have changed since moving to France

« The problem with Americans not taking vacation days
French pronunciation: Word pairs you don’t want to mix up (with audio) »