Breakfast is the most important meal of the day! It’s been drilled into our heads ever since we were kids, right? Breakfast happens to be my favorite meal of the day and always has been. Ever since I was young, my family made sure breakfast was never an oversight, and I have fond memories of my dad making pancakes for us. Even to this day, when Tom and I go back home to Florida, my dad pulls out all the stops and makes us eggs, bacon, and whatever we’d like. For me, breakfast is about family and has always been about more than just the food. I love pancakes for a treat, oatmeal has always been a favorite of mine, and an omelet is something I never say no to.

But what is a typical French breakfast like? What do French people eat for breakfast and what breakfast foods in France are popular? Is it similar to what we do in the USA?

What do French people eat for breakfast? Typical French breakfast

Keep in mind that not all French people eat the same way and breakfast foods in France aren’t the same across the board. 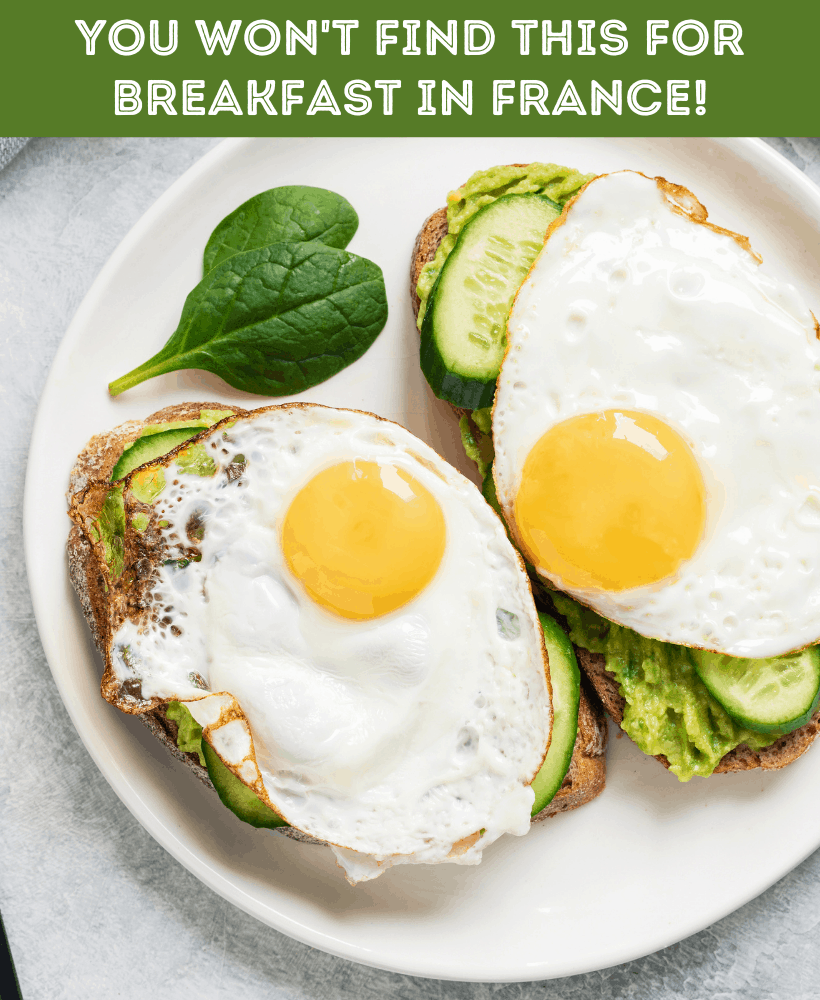 For the vast majority of French people, breakfast is the least important meal of the day. A typical French breakfast is not a big sit-down meal. Let me point out that for some Americans too, breakfast is skipped and just something you grab on the go. In general, I feel there’s more of a focus on breakfast in the USA than in France.

We have entire restaurant chains with elaborate breakfast menus for a full sit-down experience. I loved going to Perkin’s as a kid. They even do an all-day breakfast menu.

Breakfast in France is often sweet and not savory and is carb heavy. For breakfast foods in France, think bread and jam or a pastry and not eggs, cheese, or meat. In France, it’s generally not scrambled eggs or an omelet like we might eat in the U.S. Eggs are more commonly seen as a non-breakfast meal option for the French.

A typical French breakfast tends to be light and on the simpler side. That’s because the French eat a heartier meal for lunch — especially on weekends. 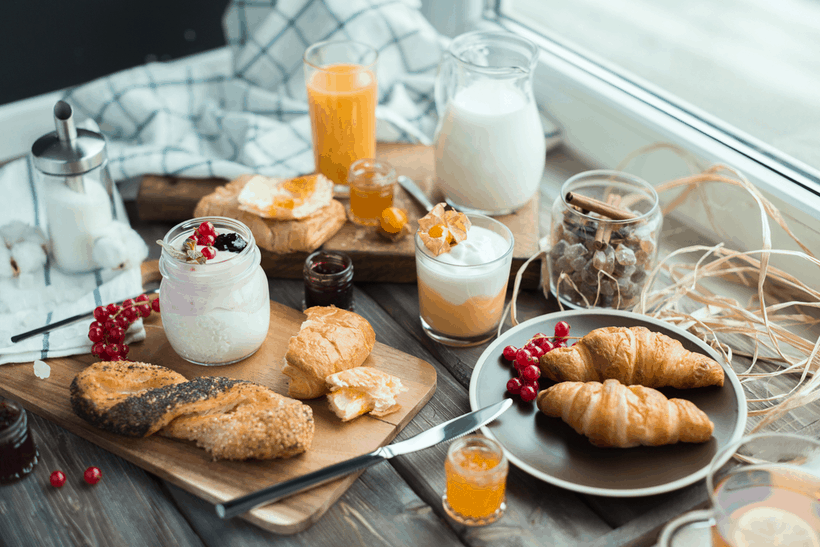 What do the French eat for breakfast?

Typical French breakfast: Here are some of the most common breakfast foods in France:

— Toasted piece of baguette with a spread like jam and/or butter. This is called a tartine. If you’re out of bread, you can buy crunchy pieces of bread called la biscotte from the supermarket that are made for tartines.

— Yogurt and/or a piece of fruit

— Juice, coffee or tea or even hot chocolate or café au lait in a bowl (not a mug). Instant coffee is popular but so are pod-based coffee machines like Tassimo and Nespresso machines. 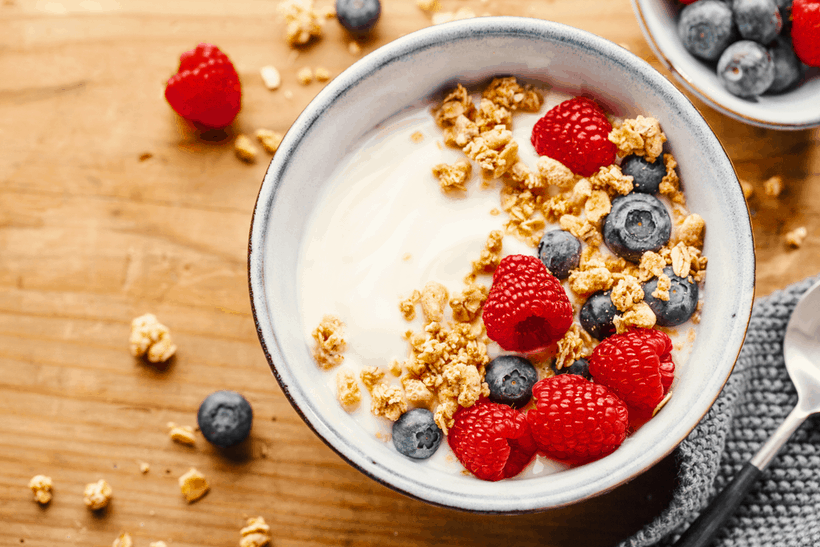 Normally, the French don’t have all of these breakfast options together in a big breakfast spread. They choose one or maybe two things, so it’s a pastry and a drink or a piece of baguette and a drink with a little fruit. It’s just a light meal. In recent years, sugary breakfast cereals marketed toward kids have become more popular. Chocapic is a popular one.

On weekends, the French tend to spend a little more time at the table enjoying their breakfast and usually eat later than during the week.

One thing to keep in mind about French breakfast foods is that the vast majority of French people do not eat a pastry daily for breakfast at home. Most people will grab a fresh croissant here and there, maybe more often on Saturday or Sunday, but it’s certainly not a daily occurrence, despite what you see on Instagram. 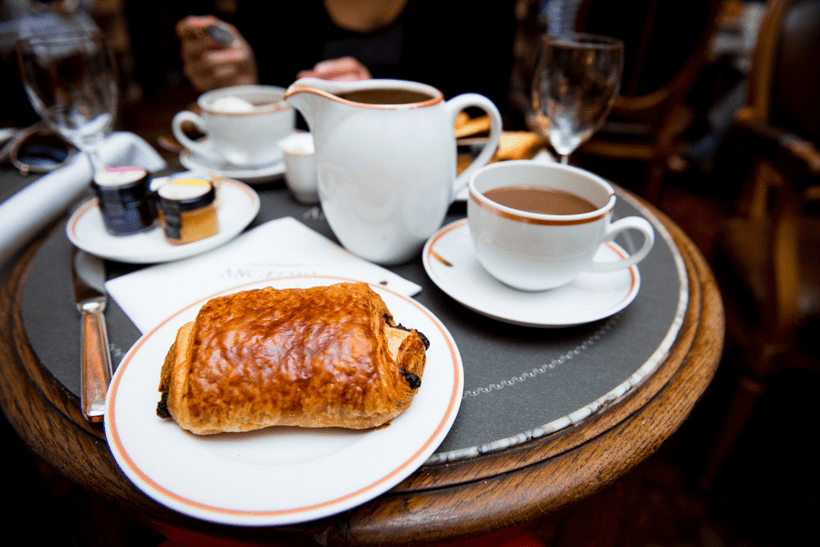 A popular option that’s a typical breakfast in France, especially in cities, is grabbing breakfast at a café before your morning errands. You’ll often see a fresh pastry, coffee, and juice offered for a fixed price — no elaborate breakfast menus here and diner breakfast fare isn’t really a thing.

The French are curious and open to other breakfast options, though. An American named Craig Carlson opened two Breakfast in America locations in Paris, which are a hit with Parisians and tourists alike. They serve American-style breakfasts like pancakes, bacon, and eggs. Craig even wrote a wonderfully entertaining book of all the trials and tribulations of how Breakfast in America came to be that I reviewed here. Tom and I have been there a couple of times and loved it.

Finally, as time goes on and international trends and foods make their way to France, what the French eat is changing and this includes breakfast foods in France too. When I first came to France, peanut butter was hard to find and Quaker’s oatmeal wasn’t on store shelves. Now, both things are commonplace at regular supermarkets all over France.

Another example is the concept of brunch in France. Ten years ago, it wasn’t really a thing, but now you’ll see restaurants with brunch menus that have trendy options like avocado toast and a mix of sweet and savory like you’d find in other parts of the world.

There you go, now you know what French people eat for breakfast. Do you enjoy a simple, light breakfast or do you go for the heartier options? What do you think of these French breakfast foods?

P.S. Just as I was publishing this post, the mail came this week’s Intermarché promo just happened to be all about typical breakfast foods in France. Here’s a page from it so you can get an idea of what’s available: 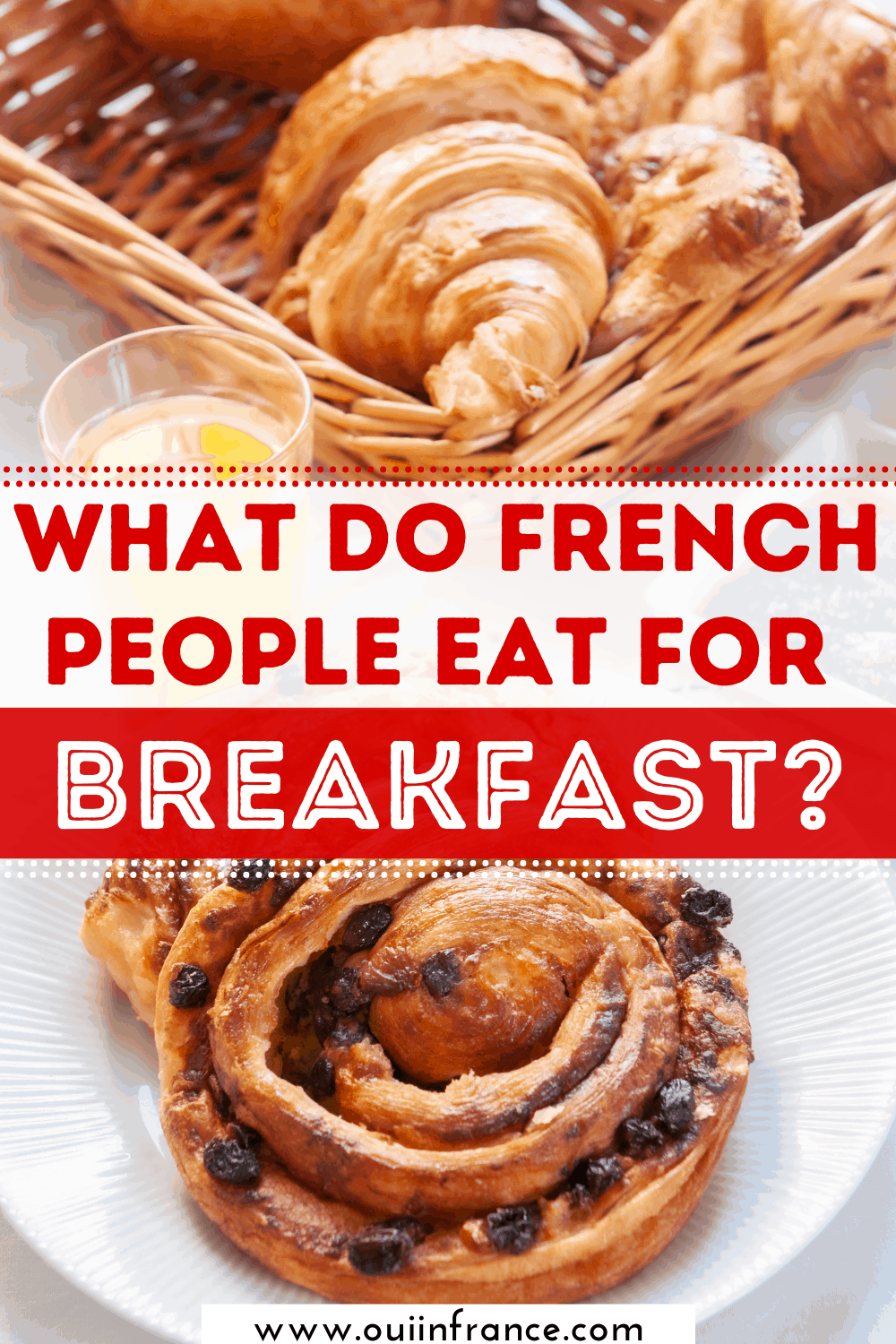 What $20 buys you at a French supermarket