Over the years, I’ve read blog posts from people living in Parisian apartments recounting their trials and tribulations of French plumbing. From horror stories involving leaks from upstairs neighbors to burst pipes after hours, every time I’d hear about a plumbing emergency, my heart would go out to them and I was glad I didn’t have to deal with sensitive Paris plumbing. I live in a house — albeit one built in the 1950s — and the plumbing in houses is different, right? Wrong. I joined the club of having a French plumbing situation last week and I think it’s a rite of passage we all have. You know, one of those Welcome to France moments.

Over the span of a week, we had two plumbers come to assess the situation, resulting in them unable to deal with the issue. We then had to finally call in the big guns — the French equivalent of Roto-Rooter, a vidange company that deals with the big jobs.

Adventures in French plumbing (not the fun kind)

Let’s start at the beginning. About a week ago when I went down into the basement to get a bottle of wine one night, as you do, I noticed the stone wall that lines up under where our kitchen is above was a little wet. I couldn’t quite figure out what was dripping or where the water was coming from.

At that time, it wasn’t a ton of water but it was noticeably wet for some reason. I made a note to call the plumber in the morning. 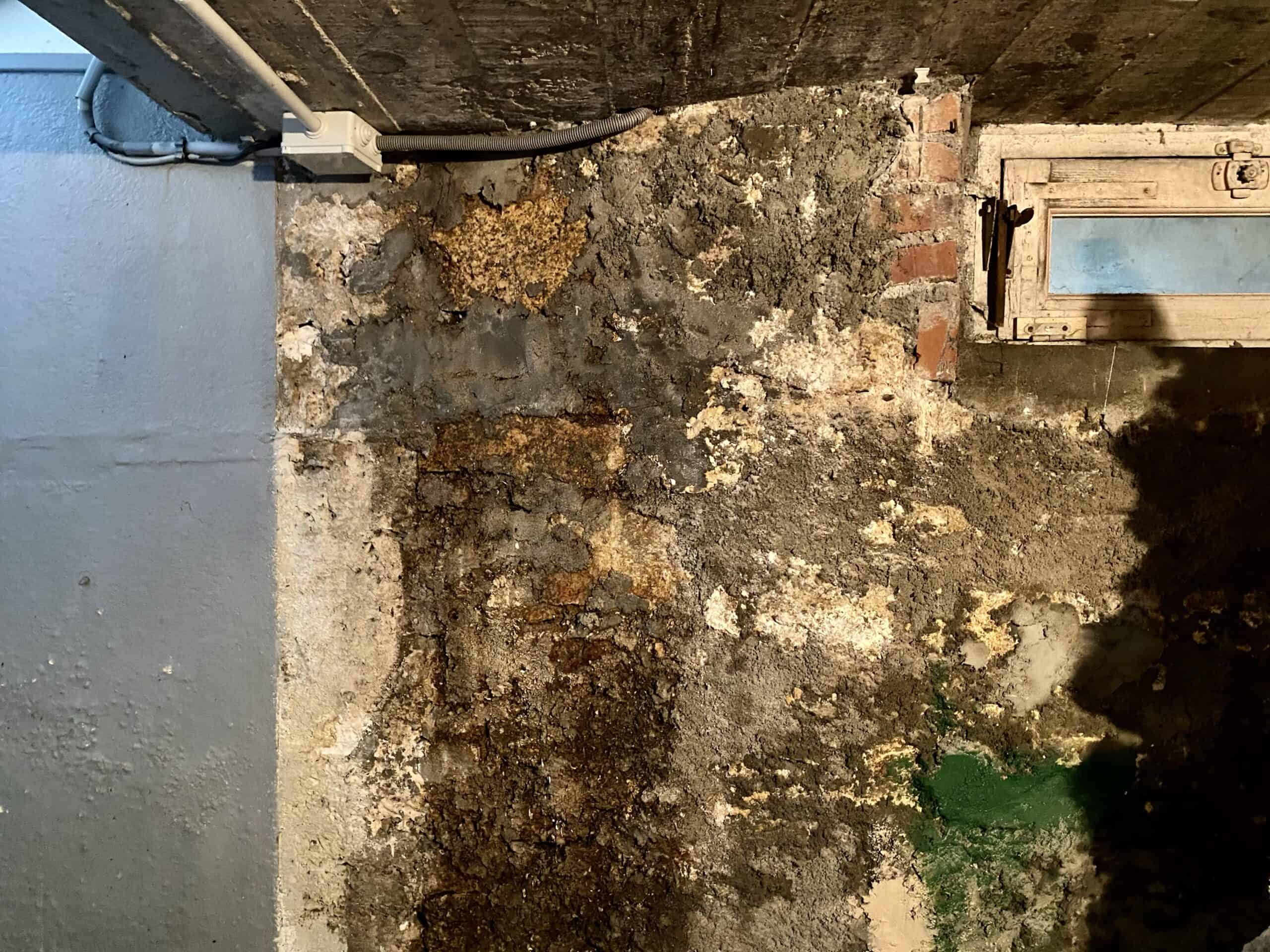 My basement wall that was curiously wet.

Tom and I had a closer look in the daylight and an old furnace drainage hose that was clipped to a pipe in that area seemed to be dripping… but from where? Was it a hole in a section of the pipe? A leak from above? Hmm. It’s a weird non-standard plumbing configuration that attaches to a kitchen drainage pipe that joins up in our downstairs bathroom, so there were several possibilities.

I called my local tradesman who we’ve used for years. They do plumbing, electric work, etc., and he stopped by but couldn’t find the source of where the water was coming from. The water meter didn’t show a leak and he didn’t see anything out of the ordinary other than the wet wall. He thought that some cracks in our cement outside in the yard were letting water in, hence the wet wall, but it didn’t really make sense. It hadn’t rained much and the outdoor cement was dry.

A few days later, his boss came because the issue persisted and he said, “Oh it’s the old furnace drainage tube acting up, we’ll just remove it since you don’t need it anyway.” But wait, shouldn’t we figure out the source of the leak before we remove stuff? For him it was non-urgent and not a big deal. He said he’d be back that afternoon. He never came back.

To move this along, the issue got worse and my wall was not only wet, but water started pooling on the steps and pebble floor of my basement, filling up the buckets I’d put out to collect the water.

Tom and I looked more closely and we were the ones who finally figured out what was going on. We had a majorly clogged pipe. What’s a bit surprising to me is that the regular plumbers — an employee and the owner of the company — didn’t even realize my pipe was clogged when they visited. In their defense, I admit our plumbing isn’t standard. But still.

Basically, we realized there was a clog in the angle of the kitchen drainage pipe. It had probably been building up for years which caused the water to back up. We have a weird configuration, so I’ll spare you the details, but just imagine an open drainage tube that connects to a pipe that was spraying like a geyser onto my basement wall every time we used the kitchen sink or dishwasher. If we didn’t have that old drainage tube, the water would have backed up into the sink directly and we would have figured it out right away. But the issue was subtle and even the plumbers missed it the first two times they came.

I called them back and told them I’d identified the issue, so the first guy came with his plumbing snake and tried to clear the clog, which resulted in a splatter of grease and coffee grounds all over the wall (we’ll get to that). Well, his little snake (that sounds dirty) was no match for my major clog. It didn’t work at all and he said he thinks a large section of the pipe was clogged, too big of a thing for him to handle without cutting the pipe.

His advice was to call the vidange company because it was beyond their scope. So I made an appointment for the next morning.

Promptly at 8 a.m. — impressed with the punctuality — the big guns showed up and got right to work.

The guy who came was about five years past retirement and wasn’t very friendly, nor did he wear a mask (which is mandated by law). That immediately made me uncomfortable. He refused to comply. Anyway, I showed him what the issue was and he got to work.

As it turns out, the pipe was majorly clogged and had probably been accumulating cooking oil and grease runoff from dishes from even before we moved in. That, compounded with the fact that I changed to eco-friendly fabric coffee filters six months ago instead of the disposable paper ones, didn’t help at all.

For the record, we’ve never poured grease or coffee grounds down the drain but a tiny amount would go down the drain upon washing dishes and washing the reusable coffee filter each day. Little by little, that built up and caused a massive clog. It wasn’t just a 2-inch section of pipe but an entire stretch probably totaling a meter in length that was packed full of congealed grease, coffee grounds, and who knows what else that had been accumulating for years. 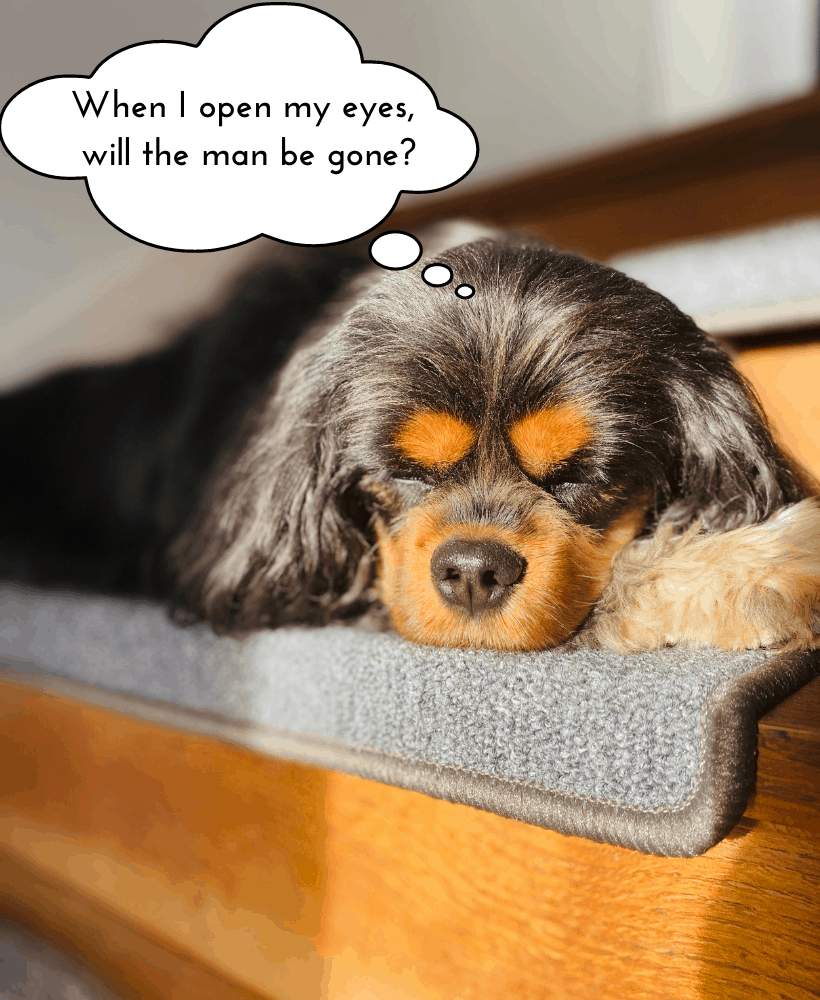 Dagny and I sat on the couch observing the man, who uttered the super professional putain about every five minutes and he went back and forth from the basement, to the bathroom right next to it, to the kitchen sink. He attached an industrial vacuum and some tubing to suck out the clog.

As his vacuum would fill up, I was a little surprised to see him walking the inside drum out to my backyard each time and dumping the contents of grease and whatever else in my bushes. I guess this is how it’s done in France, I told myself. Dirty pipe grease isn’t treated and disposed of professionally here? Side note: Yes it is. This guy shouldn’t have dumped it in my yard, but in France, I’m hesitant to ask too many questions and often assume things are done differently here. 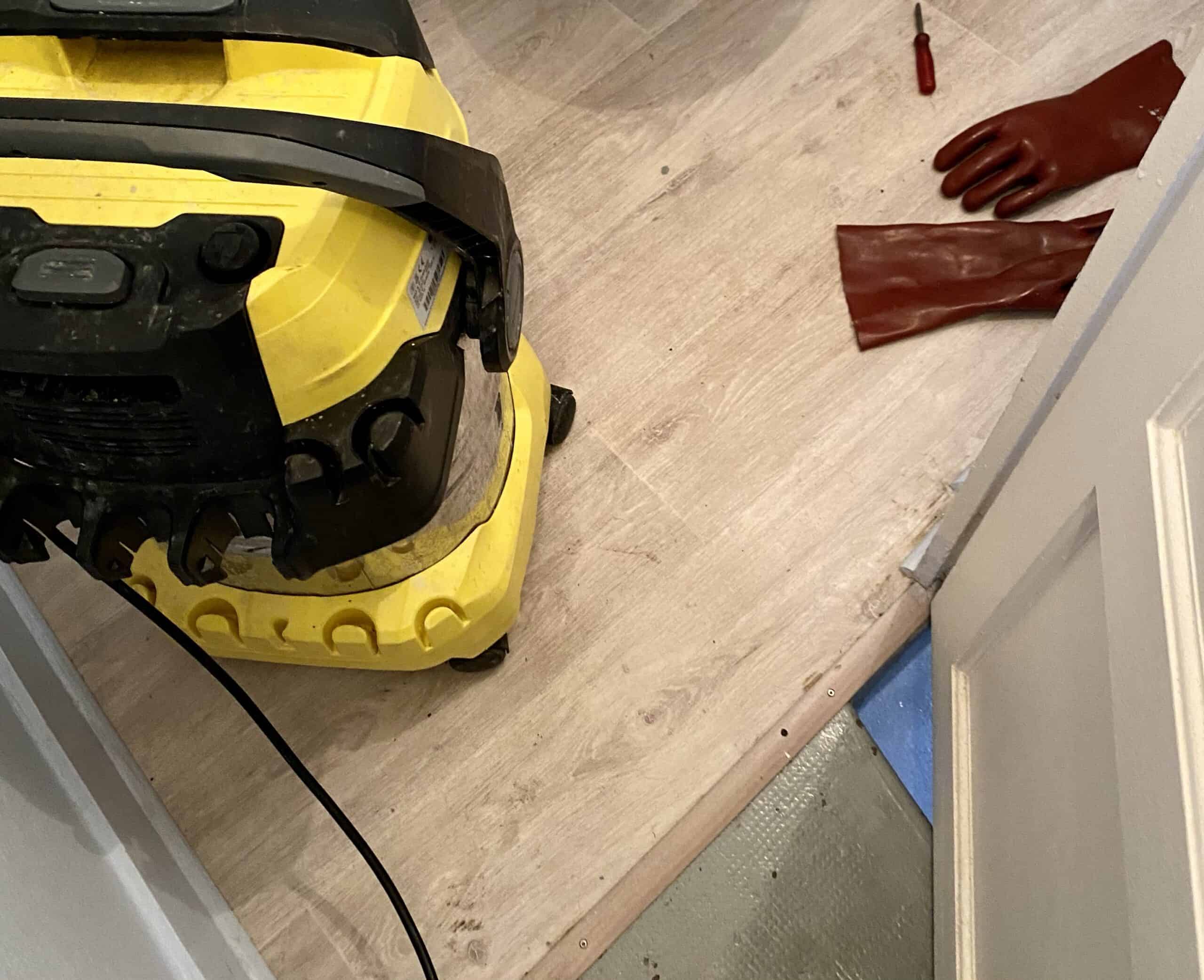 At one point, the man took off a part of the kitchen drainpipe that he wanted to rinse outside and I pointed him to the outdoor faucet. He turned it on and made a snide remark about how crappy the water pressure was.

I agreed and said, “Yeah, French plumbing isn’t great.” He said my house wasn’t great. I told him, well, at least we have running water. It’s something.

Naturally, I was getting a little annoyed with the situation and it was stressing me out more by the minute. Between his comments, refusal to wear a mask, and the increasing mess all over the floor, I was ready for him to leave.

Then this happened. And I was realllllly ready for him to be done. Fun times, my friends…. fun times.

He was serious. I answered, told him I cook with different oils mostly and sometimes butter, and assured him I wasn’t pouring grease down the drain. I even showed him the glass container I have next to the stove that I pour bacon grease into and dispose of separately, as proof that I wasn’t an idiot.

Then he said OK and asked what I do with the pan after I pour the grease out. Another trick question? I said that I washed it in the sink with dish soap and a sponge. Normal stuff, right? Nope, not for him.

He asked incredulously, “You don’t wipe out the pan with a paper towel until it’s dry before washing it?” No sir, no I don’t. I told him I didn’t wipe out the three drops of oil that coated the pan before washing it because I try to not create a ton of extra waste and it had never been an issue before. The dish soap is a degreaser that breaks up the three remaining drops of liquid anyway.

Who does that? I told him French plumbing is pretty sensitive. He told me the problem was me. I tried to lighten the mood by saying we’ve been in our house seven or eight years now (can’t remember) and it’s the first time we’ve ever needed hardcore plumbing services, so I’d consider that a success.

He half laughed. He told me he has a client he sees every two weeks because she won’t stop pouring grease down the drain. That made me feel better. I think.

Finally after about 40 minutes that felt like three hours, he was done and assured me the clog was taken care of. No more leak or wet wall. The clog was gone.

My house looked like a bomb went off, with dirty, muddy footprints trailing all over, coffee grounds splattered around the pipe on the wall and who knows what else on the floor, and wet towels and cloths strewn about.

I had to pay the 165-euro fee on the spot. It could have been much worse.

Then he was gone and I hope we have another seven years before I ever have to call the vidange company again. Not my kind of adventure.

Ever had a plumbing situation in France or elsewhere? 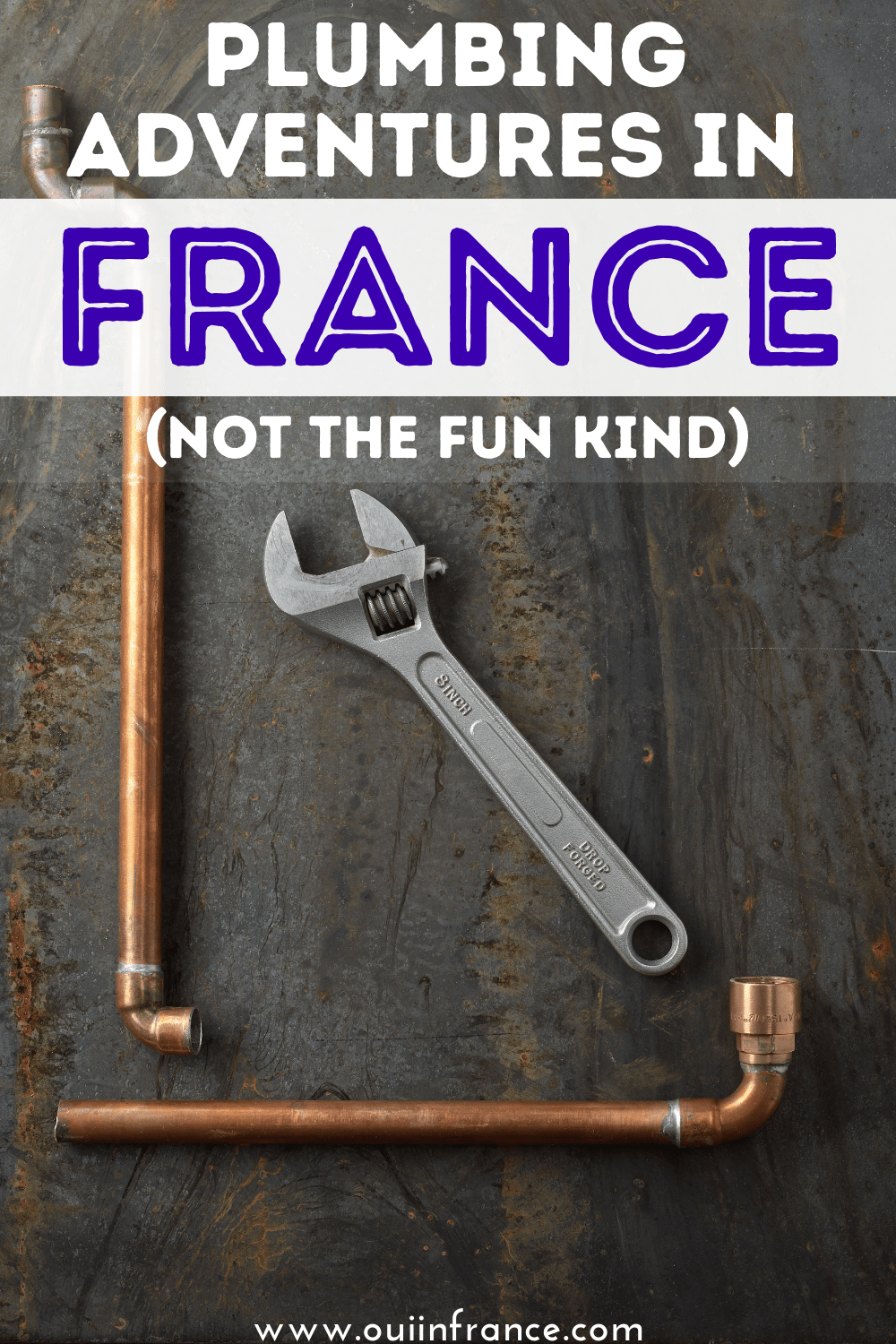 Do you feel French?

« What do French people eat for breakfast? A typical French breakfast will surprise you!
Behind the scenes at a French pharmacy (VIDEO) »