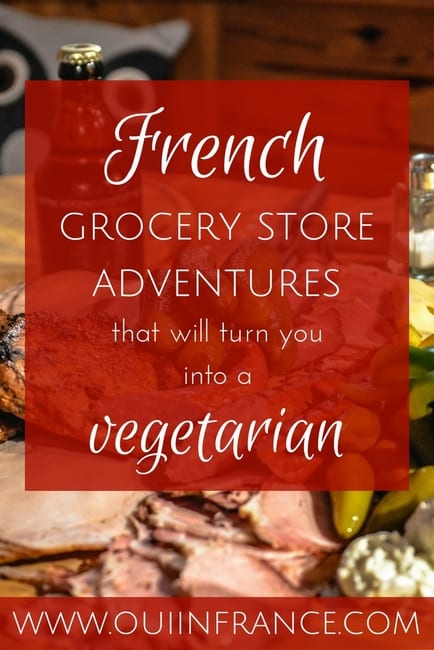 I’ve always loved grocery shopping and my outings to French grocery stores delight me even 5 years in. There’s always something new to be discovered and the French brands and products never get old. Sometimes they freak me out. I respect the fact that people have their own eating habits and preferences, but I can’t say you’ll ever see me willingly ingest any of what you’re about to see below. I purchased exactly zero of the items pictured. And seriously contemplated becoming a vegetarian. If you’re sensitive to pics of meat, skip this.

Please note this is just for entertainment/informational purposes. I know there are a multitude of reasons why people choose a vegetarian lifestyle including animal rights, health, etc. and there’s nothing wrong with being a vegetarian or a meat eater. We all do what works best for us.

I often talk about differences between French and American culture on the blog, and I think seeing meat packaged this way in the US might freak some people out. Just sayin’.

So just to put it out there, I eat meat and have my entire life. I also enjoy vegetarian meals. After seeing the variety of meats time and time again in French grocery stores and becoming queasy, I wonder if I could make a vegetarian lifestyle work. I’m sure these types of meats are delicious. My father-in-law eats all of it. Call me a prude American or “fake” meat eater, but the meat pictured below will never make its way onto my dinner plate. I’d rather slaughter my string beans and quinoa than think about the poor animal… which is really easy to visualize when it still has eyes. French grocery stores get you up close and personal with a variety of animals.

If I’m being real, there’s something disturbing to me about killing another living thing, even if it is for food. I don’t hunt. I don’t want to see an animal struggle. I couldn’t imagine working at a slaughterhouse and want to be as far away from that as possible. Buying meat in the US was no big deal and it usually isn’t in France either. Meat looks like meat most of the time, but other times it looks like the animal it is.

Anyway, here are some of the more interesting French grocery store finds as of late: 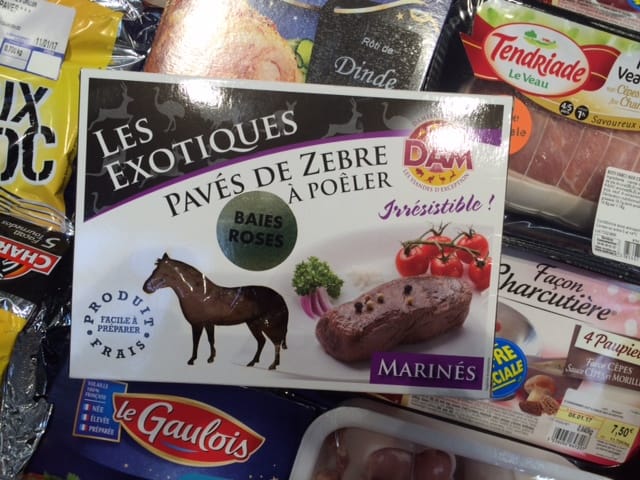 I took this picture just after Christmas after realizing zebra meat must be a holiday find. Exotic meats aren’t the norm year-round at French grocery stores. I saw ostrich and even alligator as well and it seems to be just a winter specialty. And yes, that’s actual zebra meat being sold above. 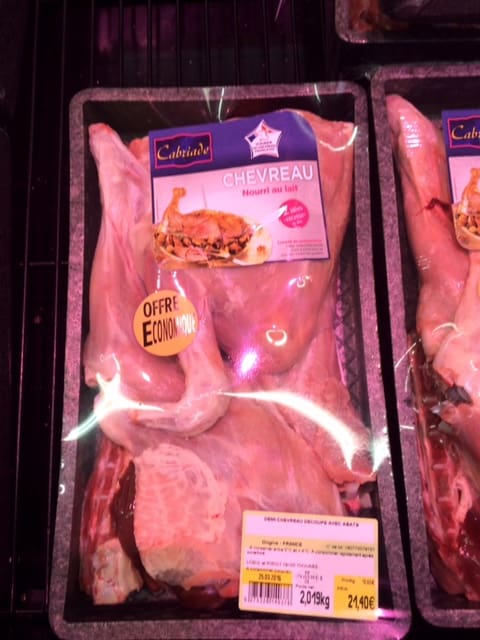 I can’t get enough goat cheese, but goat meat? And worse, BABY goat? Just no. I saw this god awful thing at the grocery store, and after I snapped this pic of the chevreau, I kept on walking. No. Thanks. Ever. 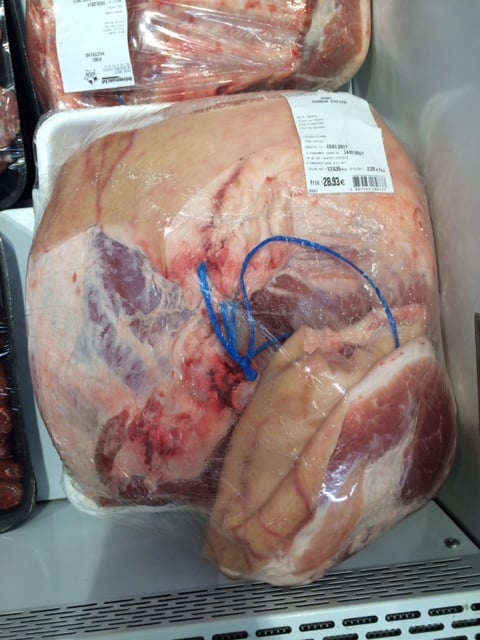 This giant jambon entier took up half of the case and could probably feed 20 people. I guess it’s great for a party, but I’ll be taking a pass on it. What do you even cook that in? 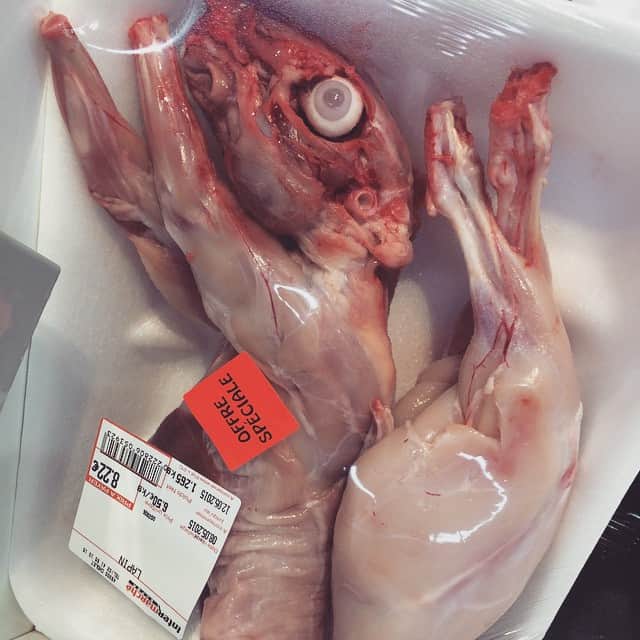 Why do they have to keep the eyes on it like that?? Poor thing. I had a rabbit as a kid growing up and this hits too close to home. 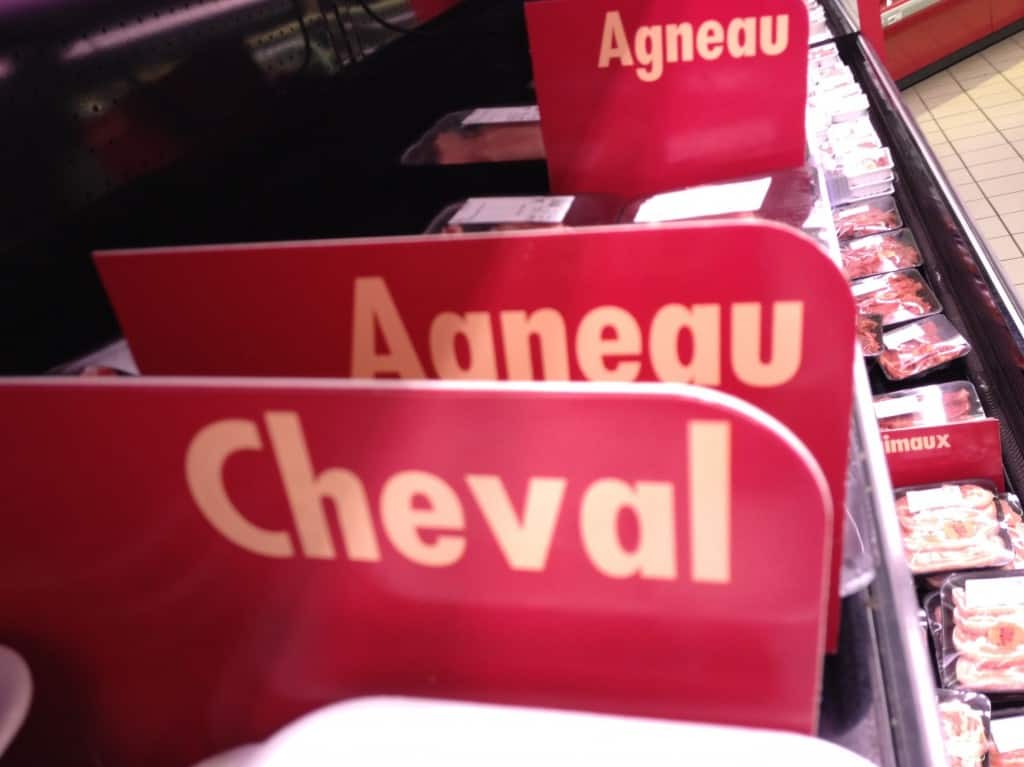 I’ve heard horse is delicious but I’ll never try it to find out. Horses are pets where I’m from and it’s one type of meat I won’t touch. 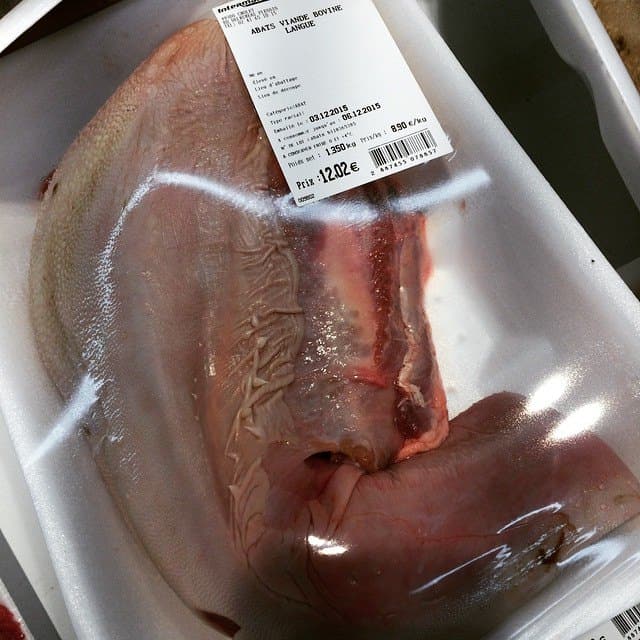 Gosh, that is a HUGE tongue. It would just feel wrong chowing down on another living thing’s tongue… as yummy as it may be. Non merci!

Have you seen anything horrifying in the grocery store lately? 😉 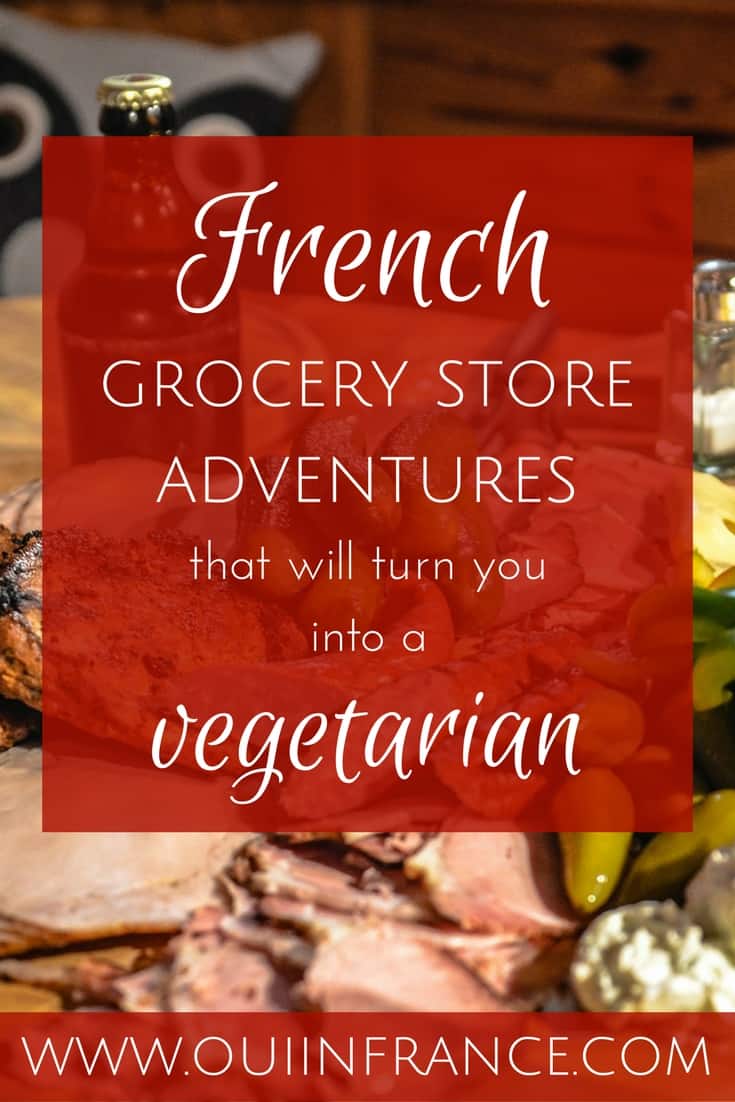