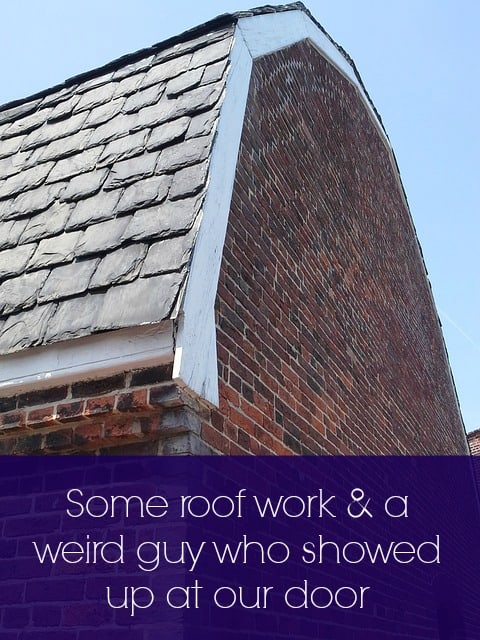 Since I’m not French and all, I accept things as “normal” here even when they aren’t. Most of the time, if something feels strange to me it’s just because I’m used to the way Americans do things. But sometimes when something feels off, it is.

Let’s take our current roof maintenance as an example. A while back, I mentioned that after buying our house we’d need to have some maintenance work done on our roof and were encouraged to do it sooner than later. Getting roofers to call us back for estimates was proving difficult, but we finally found someone who was professional and fairly priced. We sent back our signed contract confirming everything and then heard nothing for six months. Finally, last week we got a letter saying our work would start the second week of February. Great! So long story short, the roofers are here this week changing out some slate, working on a gutter and doing other little repairs. All was going well until my doorbell rang this morning. I figured it was the post office, but nope. There was a weird guy standing there with a clipboard and I knew this wasn’t going to end well…

People who ring our doorbell fall into two categories: postal workers delivering a package or people trying to sell us something we don’t want/scammers. That’s it. I’m naturally suspicious of people who come to the door (conversations with Jehovah’s Witnesses have worn my patience thin) and am not overly trusting. I admit I watch too many crime TV shows. Anyway…

The guy who rang the doorbell today looked like a character out of a movie. He looked like he was trying too hard to appear professional and work in construction. He had a bright white hardhat without a logo anywhere, a new bright blue coat, clean and pressed jeans and shoes that didn’t have a speck of dirt on them. He had a big old clipboard and pen, and nothing about him looked like he’d ever done any type of construction work. I was waiting for him to sell me some bogus home maintenance service.

So who was he? I had some trouble figuring that out. 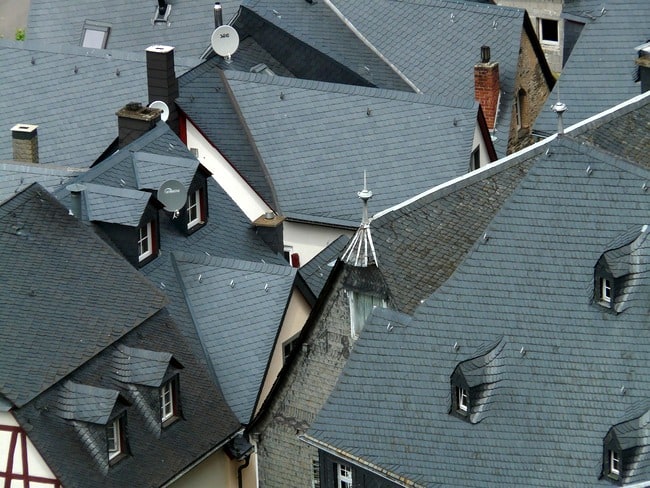 Here’s how our conversation went:

Me: Hi? (upon opening the door)

Him: Yes, madame. Are you doing some work on your roof?

Him: My name is Mr. Badreau (name changed) and I’m an inspector and I see that your roofers don’t have the safety equipment set up properly. There’s a risk of falling. May I come in and take a closer look? (as he peers inside)

Me: No, sorry. How can you even see the back of my house from the street? Do you have a business card or work ID so I can verify who you are? It’s just that I’m not French, not expecting anyone today and I’m not sure who you are exactly. My husband isn’t here right now and I just want to make sure this is all legitimate.

Him: (checks pockets) Uhh, no sorry, don’t have any business cards or ID. I need to come in.

Me: Well, sorry again but you’re not coming in. Your hat and jacket don’t have a company name, what about your car? Does that have your business name on it?

Him: Madame, I really need to take a look — it’s for their safety.

At this point, I wasn’t sure what to do so I asked the man to wait outside and I shut the door. I then asked the two roofers to come down and help me out because I had no clue where this guy was from and he was being weird about giving me proof of who he was. I figured if the two roofers saw him that at least there would be witnesses and they’d maybe scare off a scammer, if he was one. And if he was legit, they could sort it out before giving him access to my house and yard.

I was then able to get Tom on the phone to talk to this guy, too.

As it turns out, this guy is an inspector from the Inspection du Travail (health and safety inspector) and could see our roof from his office (a few streets down from us but in plain view). Apparently, it’s part of his job to verify workers’ safety and note violations, and the way the scaffolding was set up on the back of our house violated code. Until the roofers could properly set up safety equipment, all work had to stop. This was a whole big deal consisting of a report that had to be filled out, me being interrogated, the owner of the roofing company coming, etc. If I hadn’t let the inspector in, I was told he had the right to call the police. And if the roofing company owner doesn’t get the safety violation cleared up, he will face a significant fine.

In retrospect, when Tom got home from work last night and looked at the “scaffolding” he remarked how strange it looked and even dangerous. It was kind of a makeshift structure with ladders and jacks wedged up against the house using the angle to lodge it in place.

It looked weird to me too, but since I’m not French and didn’t know what was normal here, I just shrugged it off and figured it was how French roofers do this sort of maintenance work.

I’ve accepted that things are done differently here and no one wants to hear, “But in the US, we do it like this…”

But no, Tom’s instincts were right that the scaffolding was dangerous. My instincts about the guy were wrong. He was harmless and just doing his job.

What had me worried was the fact that the inspector guy shows up at my house without any proof of where he was from or who he was.

I knew better than to just let a random guy into my house and was well within my right to ask for some type of official identification, that he never provided. Maybe I was a little too suspicious of him but sometimes you have to be vigilant.

So our roof won’t be done until Monday now when the new scaffolding will be put up.

What would you have done? Ever had a person show up at your door like this?

Have an excellent weekend!

When a friend’s pet dies

Things that weird me out

« French first names that may mislead you: Male or female?
You know you’re a tourist in France when… »