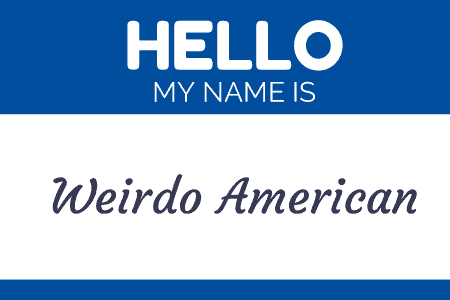 Americans aren’t weird… are we? Maybe we are. Many times I’ve been going about my business, doing normal American things and a French person will be weirded out by something I’m doing. That person is usually my husband. What do French people find weird about Americans? I’m about to tell you.

When two cultures collide, like in a marriage, there’s bound to be a lot of laughs and OMGs over things that are seemingly normal for one half of the equation. The other half will be appalled and shocked and utterly confused by the other culture’s norms. And today, that weirdo culture is my own…. good old American.

This is a general list and I can assure you all of them are absolutely true. Ha ha ha. My husband was weirded out by ALL of them. I used to think that maybe my husband was the weird one but other French people seem to share the same sentiments.

So here’s my attempt at a list of what French people find weird about American culture:

Amen to that! Pumpkin is hands down my favorite flavor ever. No, not raw chunks of pumpkin that you pick in the pumpkin patch and definitely not how it tastes right out of the can. But mix it in a smoothie with some cinnamon or in a pie and I’m in heaven. Just get used to it all you people who are missing out on all the pumpkiny goodness — Americans like pumpkin in dessert form. French people, on the other hand, think of a pumpkin as a vegetable. Period. As in pumpkin soup and the like. I found this out when my in-laws looked perplexed when I served up a pumpkin pie last fall. Pumpkin pie and muffins are not common in France at all and the average French person might do a double take if you give them a slice of pumpkin pie, offer them a pumpkin milkshake or pumpkin ice cream, etc.

Bring on the breakfast food.

Americans eat breakfast and things like eggs, sausage and bacon are common breakfast foods. We like sweet things too like donuts and pancakes and the like, but we also know what healthy is and Nutella on a baguette ain’t it.  Now would a French person sit down to a plate of scrambled egg whites and turkey bacon? Definitely not.

Walking around with bare or sock-covered feet at home.

Americans know what slippers are and many Americans love slippers. But not to the same extent as French people. Many Americans don’t wear slippers all the time at home and in the winter, heavy socks work just fine. Maybe it’s just my husband’s family, but if feet don’t have slippers on them, they assume you’re cold or just weird. I must be weird. Slippers just aren’t my thing.

Americans watch baseball games and find them fun. Not long and boring and a waste of time.

I can’t say baseball is my favorite sport to watch but many Americans enjoy it. A lot. French people just don’t get it. (can’t say I blame them on this one)

We eat dinner early. Or at least earlier than the French.

A normal dinnertime in the U.S. is 6 or 7 p.m. and if you’re in a big city and are hip and cool and child-free and work late, maybe an 8 or 9 p.m. dinner reservation would be normal. Or maybe you just like to eat later. But in suburbia, especially families with young kids, most families have dinner on the table by 7 p.m. and even earlier in the winter. In France, I’d say 8 p.m. is the norm. Saying this took some getting used to is an understatement. When the clock hits 6 p.m., my stomach starts growling and I know I have at least an hour and a half to go or Tom starts giving me “the eye.” French blogger Mathilde, who now lives in Boston, talks all about this in a recent post (in French).

Of course we like meeting friends at coffee shops and cozying up in those oversized Starbucks chairs to sip our $5 concoctions while catching up. But we really like taking things on the go too. We love drive through coffee and have no problem carrying it into meetings and appointments or on the street. It’s convenient and normal. But not for the French. This notion of walking with your coffee to go is not part of French culture and outside of major cities, the concept just doesn’t exist. Dammit. 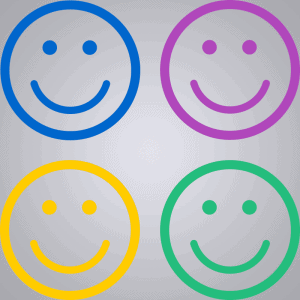 We tend to be a bit enthusiastic about things.

Americans like to smile and be really friendly and tell you about that AMAZING thing they did. Sometimes it’s sincere and sometimes it’s fake. But it’s almost always enthusiastic. This can be offputting to foreigners who don’t expect people to be so over-the-top friendly — even sales people greeting customers with, “Hi, how are you?” can come as a shock. That’s just not done in France. Yes, French people are polite but they seem to be a little more neutral when it comes to expressing themselves especially with those they don’t know that well or at all.

The toilets are weird.

Anyone who’s had the pleasure of using the toilets in both countries will tell you that American plumbing seems to be more sensitive. Loading up a toilet with toilet paper is a major no-no and will likely result in a clog in homes in the U.S. and/or water on the floor. The toilet bowls in the U.S. are always full of water and the flush seems to be really weak in comparison. Americans know to use small amounts of toilet paper and how to use a plunger. But an unsuspecting French person perched atop a porcelain throne in an American home for the first time (and using it like a hardy French toilet) might get a major surprise if he’s not careful. My husband Tom talked all about the finicky nature of American toilets and plumbing in his recent Ask Tom Tuesdays post. Consider yourself warned…

Read on for Part 2 of this post by clicking here!

So French people, tell me, do you agree? What do you have to add about those weirdo Americans?

« So I made a friend but don’t know what to do about it
New House WTF #3: That cloth trash can thing »