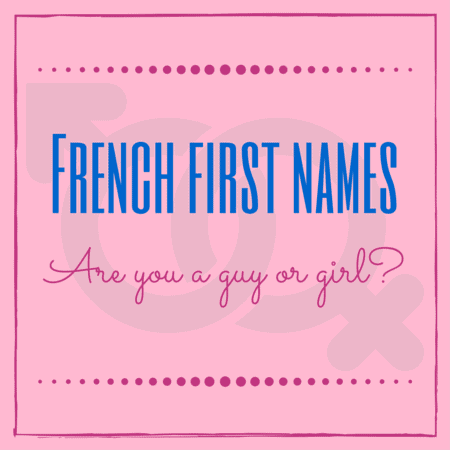 Are you a man or a woman? Does your first name reflect that? What are some popular French female names that can also work s French male names?

Some first names are really straightforward and you know right away upon hearing the name if the person is a guy or a girl. Let’s take Diane, for example. I guess a male Diane is out there somewhere but 99.9% of the Dianes walking around are female. And Thomas is pretty much always male. But it’s not always so straightforward with French first names. A handful of French first names work for both sexes and I’m going to tell you which ones to watch out for….

Let’s go and see why French first names can be misleading!

French first names: Are they male or female?

I have a friend who works for a company based in France. She often emails her French colleagues for business-related requests but one day, her colleague Dominique had to call her to set something up. Email just wouldn’t suffice.

So my friend answered the phone and was taken aback when Dominique turned out to be a man. For months, my friend had pictured a female Dominique in her head and they both got quite a kick out of her mix-up. Up until I came to France, Dominique sounded like a girl’s name to me. Like Monique. A guy would be called Dominic in the US, right? A NICK not a NEEK at the end. But not so in France.

Is the name Dominique male or female in your experience?

And that was only the beginning! 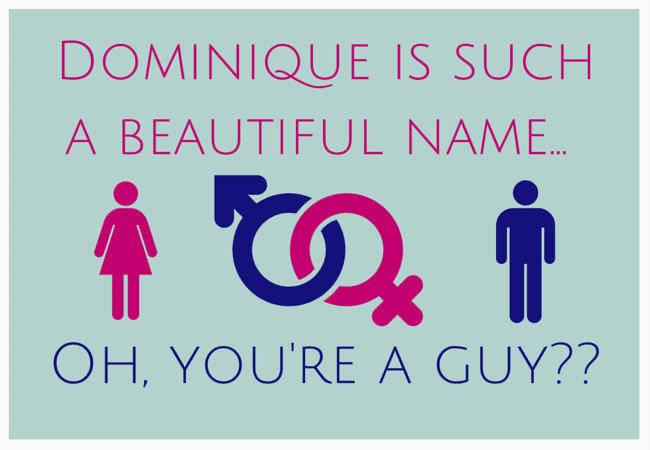 I think French first names sound pretty cool but they can really mess with a foreigner.

Is Jean Marie male or female? What about Laurence?

Here are a bunch of French first names that are for both sexes. They’re pronounced exactly the same. In French, if you’re just speaking to someone about a friend or family member and you hear the name (but don’t see it written, which helps sometimes), there’s usually context in the conversation to help you figure out if someone is talking about a man or a women — like “ma collègue Dominique.” Ma is feminine so a French speaker would know that in this scenario that Dominique is a woman. For a man, they’d say “mon collègue.” But sometimes there’s no context and you don’t see the name written out.

Let’s take a look at some French first names that are pronounced the same way for both sexes (male // female):

Daniel/Danielle (Tom has trouble differentiating between these two in English. In French, they are pronounced exactly the same)

Dominique for both men and women

NOTE: Usually the female version of the name has an “e” or “le” at the end, so if you see it written, that’s will tell you if the person is male or female. Upon hearing it though, you’ll need to use context.

When French first names trick you

And a total aside about French names, I recently heard the French name Victoire and I think I want to change my name to Victoire. Sounds super cool to me. But then again I like the name Nicole and Tom has informed me that it’s one of those old French names. Like Michelle or Jocelyne. Oh well.

Ever get into a sticky situation over French first names or names in general?

NOTE: In France, if you ask someone their name (nom) they’re going to tell you their last name. If you want to know their first name it’s called a prénom. Also, French nicknames aren’t as common as nicknames are in the USA. You’ll see that most people go by their entire first name. So Thomas instead of Tom or Tommy. There are exceptions, but generally speaking you call a French person by their entire first name and not a nickname.

How to stay safe abroad online and offline: A guide for solo female travellers

« Fabletics review: January 2015
Some work on the roof & a weird guy who showed up at our door »