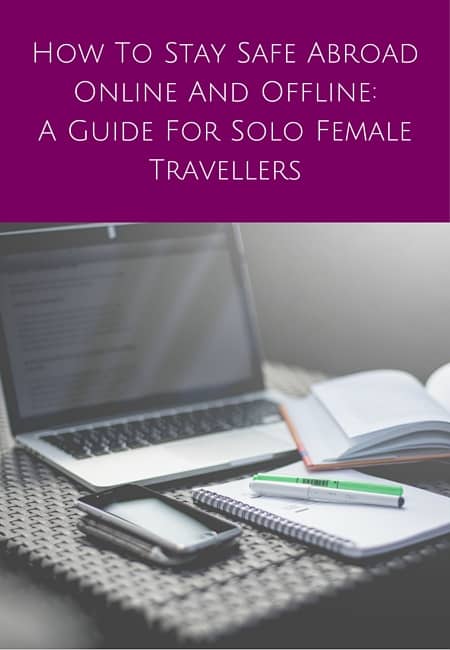 ***I’m currently on vacation in Corsica and this is a guest post from one of my readers. Thanks for checking it out & see you soon!***

One of my favorite parts of blogging is hearing from all of you out there! When I asked for guest posts to put up while I’m on vacation, I thought I’d maybe get an email from one or two people but instead I got a bunch of great pitches from super-cool readers. Today’s guest post is from a blogger named Scar who has a really interesting job. She’s a digital forensic investigator and is here with her tips on how to stay safe online and offline when traveling solo.

Sometimes it feels like I spend the majority of my life on a plane. Not one specific plane, obviously. Lots of different planes.

My job takes me all over the world. I’m a digital forensic investigator, and since I work for myself, my travel plans generally don’t involve being with other people.

There are lots of posts around that talk about staying safe as a woman in certain countries, but not many general guides, and hardly any at all that include tips on being safe online as well. So when I read that Diane was looking for guest posts on Oui In France, I decided this might be a good thing to write about.

This is perhaps the most frequent refrain of the solo female traveller. ‘Creeps’ doesn’t always involve people putting you directly in danger, it’s true; but situations that start with people (OK, men) just being a bit creepy can all too often escalate into a place that doesn’t feel safe at all.

I grew up in the UK, and that means I’m afflicted with an ingrained politeness that makes me feel terrible any time I ignore someone. But travelling has made me better at this, because the #1 piece of advice that usually works when fending off your average creep in the street is just not to give them the satisfaction of a reply.

I know, I know, you feel terrible doing it. As women, we’re taught from a young ago to be nice, to smile, not to be bitchy. But looking after your personal safety? That’s not bitchy or impolite. It’s a basic necessity.

If you find a creep who won’t leave you alone even if you do try to ignore them, try saying firmly that you’re not interested in their company. This feels terrifying, and I was convinced it wouldn’t work, but I was surprised once I started doing it at the number of guys who would back off when I told them, firmly and without smiling, that they were going to leave me alone now.

If all else fails, making other people aware of your situation is probably your best back-up plan. Loudly saying something like “Please remove your hand” or “I am not interested, leave me alone”, or even screaming if you’re in a less populated place, can bring other people out of their individual headspaces and encourage them to help. 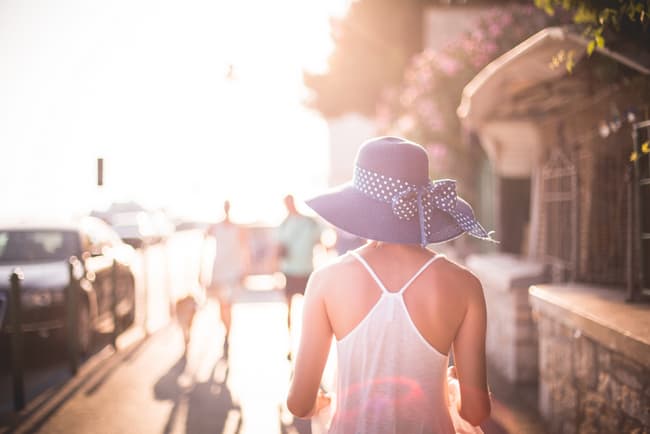 Creepy men on the internet are one of those things we all come across from time to time. Whether it’s posting obscene comments on our selfies, responding to our tweets with disgusting suggestions, or hounding us in some other way, creeps online are a seemingly inevitable part of modern life.

Once again, it’s important to look at our own reactions to things. On occasion, I’ve found myself carrying on a conversation with someone online that I would have ended immediately if they’d tried to approach the subject in the physical world, just because I was afraid of seeming petty or impolite.

Ladies: You do not owe strangers on the internet your time. If someone is bothering you, most social media sites have a ‘Block’ function. Most email services will allow you to set up a filter whereby messages from a certain address bypass your inbox and go straight to spam.

And if you do find yourself being hounded by a creep online, take a couple of minutes to report them to the site in question. Websites can’t help their users if they don’t know whom they should be protecting them from.

Sometimes, when you’re wandering around a new place, you just get hopelessly lost. This happened to me in Myrtle Beach, South Carolina. It was my first day of working there, I’d just left the place I’d been working in all day. I was exhausted and warmer than I’d ever felt in my life, and the humidity was playing havoc with my sinuses.

But, you know what? I did get into his car. Because sometimes you do need help, and sometimes – like in this instance, luckily – people really are just trying to help out another person.

Before I got in, though, I did a couple of things to try to ensure my own safety. Firstly, I weighed up whether I felt at all weird about this guy. There’s a lot to be said for instinct. But he did seem genuine. This isn’t foolproof, of course, but if he’d made me feel uncomfortable in any way, then I would have said no.

I then walked around to the front of his car and studied the number plate. I memorised it before I got in. Then, once I was in the car, I said something like “Excuse me a sec, I just need to message my friend”, pulled out my phone (which didn’t work in the US, but he didn’t know that), and pretended to send a message. This meant that, in his mind at least, someone else knew where I was and had some of his details.

So yes, by all means, ask for help from people. It’s one of the best ways of making friends abroad, and a lot of people really do just want to help you out. But trust your own instincts, take precautions, and tell someone else where you’re going to be – or at least pretend to. 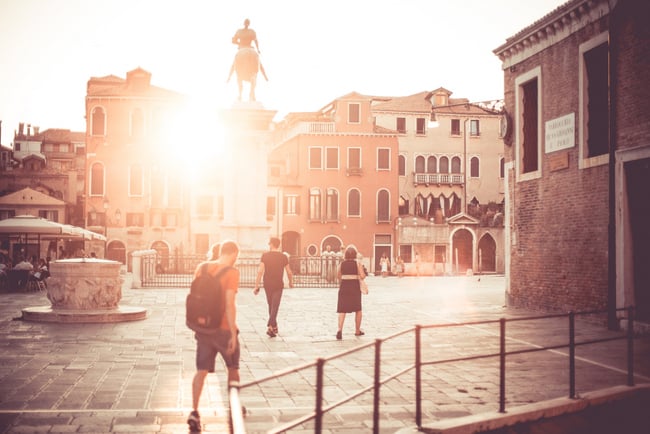 Travelling can be a lonely business, and one of the best ways to find out about whatever area you’ve just landed in is to go online and look at forums, Facebook groups and blogs written by locals. Asking questions when you’re not sure about where to buy something, or looking for helpful tips from people who know the area better than you, is a great way to improve your travelling experience.

However, it’s important to remember that the caution we exercise offline should also be applied to our interactions on the internet.

Probably not. So before you join a Facebook group, or post on a forum, go over your privacy settings. Check to see how much information someone can glean about you from your profile, and change your settings accordingly. If you’re signing up to a forum, Google the username you’re about to put in. You might find that you once used the same one to sign up to a parenting site, or a site for people who had a certain health condition, or that searching for the username uncovers some other aspect of your life that you wouldn’t want to share with a stranger.

Another good thing to do if you’re joining a lot of different websites is to set up a secondary email account. You can make the messages get automatically forwarded into your main account, so you don’t have to worry about missing an important update, but it adds an extra level of security and means that if that address is somehow compromised, it doesn’t affect your primary account.

In summary: it’s important to think about safety when travelling, but also to not allow concerns to take over and ruin your experience. Trust your instincts, don’t give away too much information about yourself, and be careful with who you are online. If you do all of those things, you’ll probably have a fantastic time abroad, whether you’re going on holiday or permanently relocating.

Scar is a digital forensic investigator and academic who travels a lot. She specialises in child protection, counter terror and psychology, and her job takes her all over the world. You can keep up with Scar’s adventures on her blog, scarscarscar.com.

Do you travel solo? Have any tips to add?

Wine suitcase: How to bring wine on a plane

barre3 online reviews and what I do for fitness in France