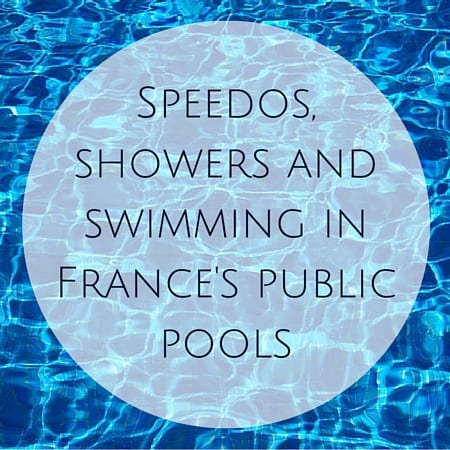 One of my favorite parts of blogging is hearing from all of you out there! When I asked for guest posts to put up while I’m on vacation, I thought I’d maybe get an email from one or two people but instead I got a bunch of great pitches from super-cool readers. To kick off this week, we’re hearing from Sara, a fellow New Jersey girl who blogs about life in Paris and travels through European on her blog, Simply Sara Travel. And she’s talking about France’s public pools!

My husband and I lived in Paris for three years and recently moved back to the NYC area in June. Before we said au revoir, we embarked on a one-month farewell-to-France road trip where we hoped to get our last fill (for the moment) of all things French.

For the most part, we felt like we had really taken advantage of our time living abroad and didn’t have too many bucket list items, besides just getting in some more time to travel around the country. There was one outstanding item waiting to be checked-off, apparently.

“I want to go to a public pool,” Michael replied to my question of what activity he wanted to do while in Toulouse.

I soon learned that this swimming in France thing wasn’t an on-the-whim idea. He had researched our route, plotted out where the public pools were located, and narrowed in on a swimming facility just outside Toulouse as the best option. “Oh, and I bought these for the occasion,” he revealed, pulling out a speedo from his suitcase. He really wanted the cultural experience of going to a French public pool, judging from the preparations he had done.

Now, this might sound like a last-minute effort to make a “not-ready-for-America” purchase, as my sister-in-law would call it.

But the Speedo is key to the French pool system.

Do you know what to wear swimming in France? For men, wearing a speedo in French pools is required (and we have heard of many cases of people being thrown out of the pool for wearing swimming “shorts”), but the exact reason raises much speculation.

I’ve heard it all come back to sanitation concerns. Some say that speedos are mandated since they dry fast. Frequent swimmers aren’t going to wash their suit daily, so a fast-drying suit is best. Others say that the problem is that clothing worn outside is not allowed to come into the pool area. Bathing trucks could be worn like shorts, but no one is going to be traipsing about in a French speedo prior to coming into the pool. Whatever the case, the point is, there are rules — and us foreigners must properly prep for an afternoon at the pool because it may not be intuitive. Swimming in speedos was certainly new to us. 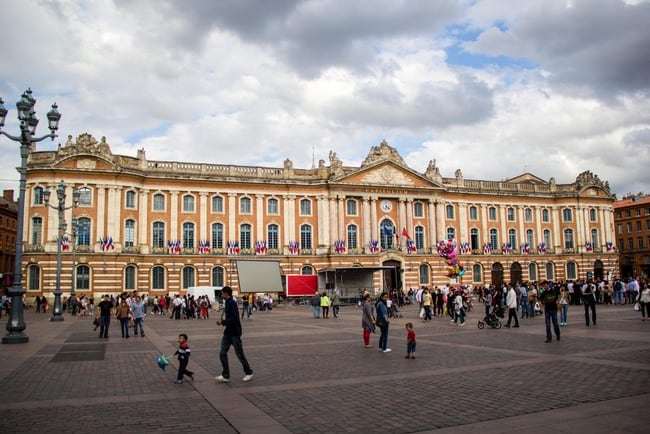 The average tourist might not be inclined to venture too far from La place du Capitole, the grand square of Toulouse.

We pulled up to the Espace Nautique Jean-Vauchère facility on a weekday afternoon, and braced ourselves for what was to follow. There is tons you can find on the internet about the procedures of a French public pool. Michael, of course, had read a lot, to make sure we knew what to do. We were even a little thankful that the one woman in front of us to pay had some sort of special case and was holding up the line. It gave us time to notice the vending machine in the corner of the room.

“Oh, we need our bonnets de nage,” Michael informed me. “They’re even required for guys with short hair – everyone needs to wear one in the pool.” So swim caps in hand, we paid and entered, level #1 unlocked.

I thought we were doing great, despite the very confused looks from the cashier when she heard our foreign accents. But we had barely turned the corner when we heard stern French coming at us in a huff.

The foul? We had switched out of our sneakers and into flip flops in the parking lot, since we thought it would be easier than to carry the change of footwear inside.

Silly us, we were caught wearing “street shoes” into the locker room, which was an apparent no-no.

So we sheepishly removed our flip-flops, proceeded barefoot, and selected a locker to share in the co-ed space.

We changed in the individual changing stalls around the perimeter of the room, and then headed out with our towels to the next step in the getting-ready process: the showers.

The first time I encountered these European pool-preparations was in Iceland, and I got freaked out a bit. If you don’t know what’s coming, exiting the locker room area in your bathing suit into a room of naked women showering before going into the pool is a bit confusing. So this time I was less surprised to see a row of shower heads and soap dispensers, where everyone was rinsing off in their bathing suits.

What came next though, is a little twist to the sanitary regiment that I had come to expect. Looking back at it, I assume this extra step was a “because France” thing. My father-in-law loves to live by the motto “Rules are for other people.”

In some regards, if you’ve ever lived in France, you might think at times this is part of their national identity as it is part of Dad’s personality. The proof I can submit to you today is that when we turned the corner, expecting to go straight into the pool area, we instead found a foyer lined with rows of motion-sensitive sprinklers overhead.

Yes, we were made to walk through a car-wash-for-people intended to catch that sneaky non-rule abiding group who may not have properly washed. (Of course, we observed one woman in the know who had marked out a path that would even avoid the reach of those sprinklers.)

Once inside, we found many options in front of us. To the left was the lap pool with many lanes. To the right, a pool for the more casual swimmers. Straight ahead was an outdoor pool, complete with a lazy river, that was sadly still closed for the season since it was only mid-May. But just before the doors to exit for the outdoor section was an “Aquagym” with exercise equipment.

I took off in that direction, and made a beeline for the underwater treadmill. When you consider that we were halfway through our final hurrah of traveling through France, which included eating all the cheese, baguette, and croissant we could lay our hands on, you might imagine how the prospect of an underwater treadmill would make me ecstatic. I gripped the handlebar and had just barely started to jog when…

Zzzzzzing!! A whistle sounded, stopping me in my tracks.

“Désolée, Monsieur,” I apologized, after being told that there was an extra charge for the area that had to paid upon entry. There were systems in place that I should have anticipated before entering the pool, and should have known to make a reservation and pay for time in the Aquagym.

I got out of the water, and turned my attention to the other method of exercise I could instead participate in – swimming laps. I’ve never been a serious swimmer, and only had vague notions that in the US faster swimmers go on one side and slower swimmers on the other. I watched to see if this was an etiquette across international waters but not to my surprise, observed some form of organized chaos typical of France.

French pools aren’t the same. I wasn’t ready to get in trouble a third time, and let’s be honest — we weren’t there to work out anyway. Suddenly I noticed one last unexplored area, one that was surely more our speed.

The Espace Détente — the relaxation space. It was equipped with a steam room, a pool with a waterfall flowing into it, a sauna, and a jacuzzi. All which we were happily tried in that order.

As we settled into the last of the series, the jacuzzi, we were shortly joined by a middle-aged gentleman and an older lady. Michael and I were softly talking which piqued the interest of our jacuzzi-mates. Where were we from? What we were doing in Toulouse? What were two Americans on vacation doing at the pool? Wasn’t Toulouse so lovely? Better than Paris, no?

It was day 3, our last day in Toulouse, and we had been surprised from the get-go about how friendly the residents of Toulouse were. Our conversation continued. The man was eager to remark that Americans only eat hamburgers and drink coca (translation: Coke), and went on to express surprise that we were not overweight like our fellow countrymen.

It’s that French frankness that might have offended us three years ago, but now was just shrugged off. “You’re going to love Toulouse so much, you will quickly return,” he declared to us as we parted ways and got out of the jacuzzi. 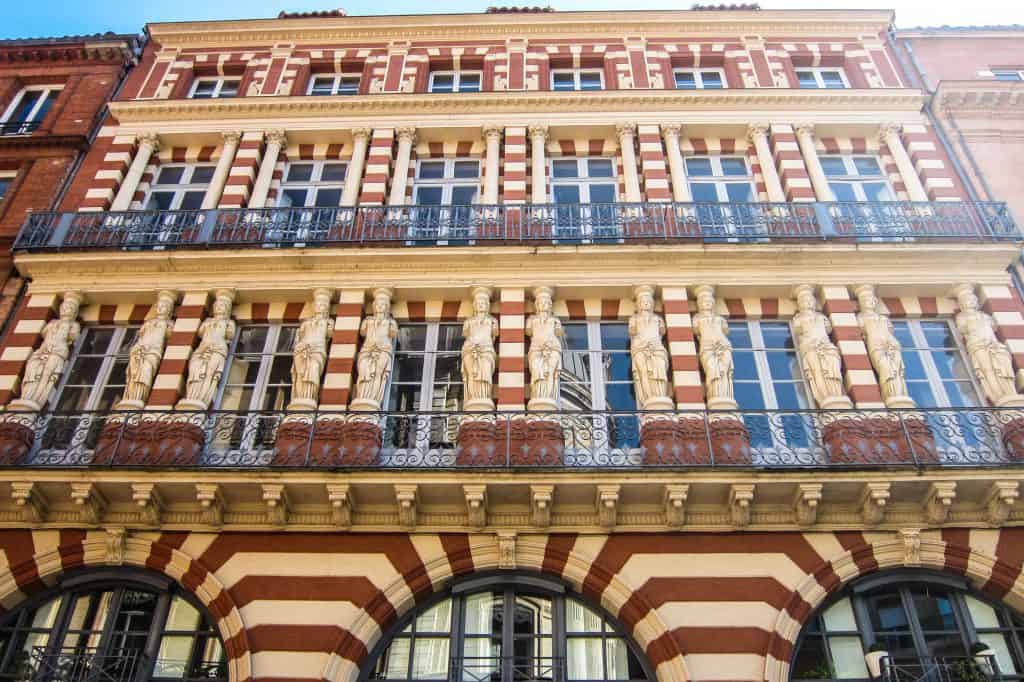 Last week, as I was sorting through laundry to bring down to wash in our Manhattan apartment building, a speedo and two black swim caps tumbled out of a miscellaneous pile. They are the physical mementos we have from our French public pool experience. Holding that tiny bit of sleek material, I couldn’t help but smile and think back to our jacuzzi small talk. That man was right — we did love Toulouse, and hope to return one day.

And we got to try out a public pool in France there. Michael sure picked a gorgeous facility for the experience, though perhaps this advice needs to be added to the endless French public pool forums — if you’re a foreigner, try the Espace Nautique Jean-Vauchère because at least when you get yelled at, it’s in France’s friendliest city.

Ever experienced swimming at a public pool in France? Show Sara some love in the comments & check out her blog here!

Paris park etiquette and why public sex is never cool

Things that weird me out

« Monday Mishmash 9/14/15
How to stay safe online: A guide for solo female travelers »