On our recent Paris trip, after our photo session ended, we were walking out of the Parc de Sceaux and came across a lovely couple. So lovely that we just HAD to take a pic. But no, they weren’t especially cute or picture worthy for the reasons you think. Nope. We took a pic because they appeared to be having sex right out in the open! So much for park etiquette!

Read on and SEE THE PIC!

I must say that after all my travels (and living in NYC), I’ve seen a lot of crazy things that make you do a double take. Most things don’t faze me. That said, I definitely had to look twice after catching these two in what seemed to be a very compromising position. We just had to stare! There they were, just going at it without even trying to cover themselves with a blanket, legs splayed open, right there on the grass in plain view of everyone around.

If you want to get busy in a park, that’s your prerogative. Were these people actually doing the deed?

You be the judge, but honestly when the guy’s pants are down and there are, well, um, movements, it looked pretty convincing to us.

No, this wasn’t in some tucked away area of the park. There were kids right on the other side of the bushes. This was 100% smack dab in the middle of the park at 7 p.m. when it was still daylight. If you’re into this kind of thing, at least wait until it’s dark or go somewhere more secluded! And if you must do it out in the open, be quick about it. These two were going on and on and on and on.

And now for the public sex pic:

We didn’t want to get too close and disturb the lovely couple, but you can see what’s going on here… 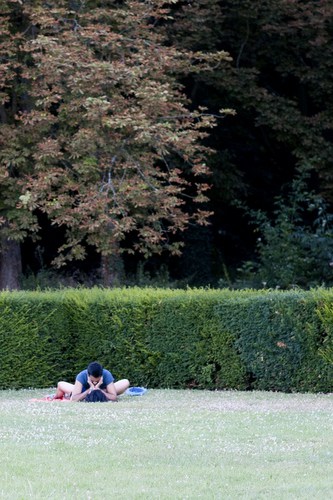 Care to share your thoughts on public sex and park etiquette?

Baguette etiquette: What to do and not do with your bread