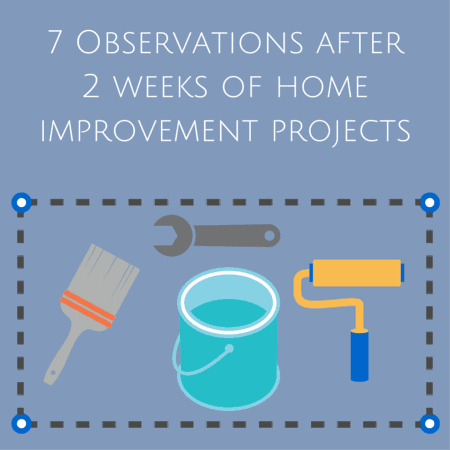 I’m coming at you from my freshly painted living room today! If you’ve been following the blog, you know my dad was here for the past couple of weeks to help us tackle some home improvement projects we’d been putting off until the time was right. After two weeks of mayhem, I have 7 observations that you may have experienced (whether you live in France or not) while taking on home improvement projects.

This September marks 2 years in our house, so these projects were long overdue. As first-time homebuyers, we weren’t able to tackle everything right after moving in, but now we were ready. And there was a lot to learn!

Here are my observations:

Everything takes twice as long as you think it will.

We had an ambitious list of projects to tackle but we only crossed off about half of them in two weeks’ time. Let’s take painting for example. To do a nice, clean painting job, you have to cover all your furniture, tape the walls, prep the walls, do a ceiling coat or two, then a couple of coats on the wall and when that’s all dry, start working on the trim. All of this takes time when you’re covering large areas of your house that require ladders and scaffolding. Now maybe if we worked on things from 6 a.m. to midnight daily, we would have gotten a lot more done, but we had to have a little fun too. So needless to say, a bunch of things will have to wait until next time.

Windows without screens let in a ton of flies.

I’ve talked about this one before and how window screens would be a welcome addition to my home. When you’re going in and out of the garage 10 times an hour to get stuff and leaving windows open as the weather warms up, it’s inevitable that flies and bees will make their way inside. My dad commented on the number of flies in the house several times and it’s the truth. It doesn’t happen when you have screens. 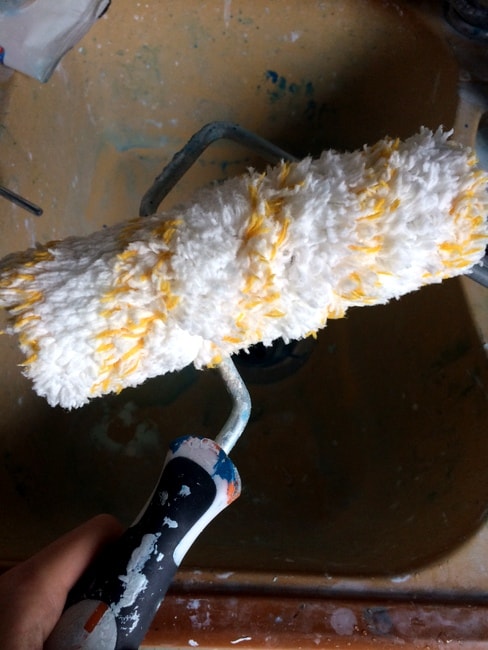 It seems that in France, the largest size paint roller you can buy in mainstream stores is a measly 9.055-inch one (230 mm). We scoured the aisles of the Lowe’s and Home Depot equivalents and while there were many types of rollers for different wall surfaces, the biggest available was 9 inches. Really. Totally useless when you have to cover huge sections of wall. Back and forth back and forth. We also had to swap them for new ones after covering half a wall because pieces of the roller started breaking off and getting stuck to the wall.

Get everything you need in advance.

Trips to and from the home improvement store take time and energy and we would have been better off buying all of our supplies well in advance of my dad’s arrival. Something as simple as buying paint took hours and I’d figured it would be simple. Leroy Merlin wouldn’t mix the color I wanted so after arguing for an hour, we had to mix it ourselves. Which took time. Add to the fact that stores are crowded (and close early), we could have saved time by buying everything in advance.

French plumbing is not your friend.

For American plumbing systems to be up to code (and pass home inspections, which don’t exist in France to the same extent), in most cases you need drains to have traps. Basically it’s a curved pipe that, by design, stays full of water to block sewer gases from coming up the pipe and wafting into your home. Very normal thing. Well, our shower and sinks don’t have traps because the guy who lived here before us probably hired a plumber under the table who cut corners in order to save money. People get away with this because there are no super-detailed home inspections here when you move so something like this flies under the radar. Trying to find a suitable trap — that’s the right size and gets the job done — has been quite the endeavor. I understand that French homes won’t be exactly like American ones, and that’s totally fine, but who wants smelly sewer gas in their home? Not me, no matter what country I’m living in.

We took on somewhat simple home improvement projects like flooring, painting and other little facelifts. It’s not until you actually switch out the old for the new that you realize what a major difference a small thing makes. Just having a clean coat of paint everywhere makes the whole place look light and airy and new. A new toilet seat and a couple new shelves in a closet really spruce the place up. You don’t have to spend a ton of cash to make a difference.

The unexpected will happen.

Rarely do things go according to plan in life, and home improvement projects are no exception to that rule. Case in point? We had to remove a radiator to paint behind it and all was going according to plan until we realized we no longer had hot water. Apparently our hot water heater was registering low pressure and for the life of us, we couldn’t figure out what was wrong. Turns out that there was a broken valve inside our ancient radiator’s wall joint. So to fix the issue, I had to get the owner of a nearby company who we’ve used before to come over and take a look. It was a cheap and easy fix but it was unexpected and still took time. Oh, and Dagny brushed up against a freshly painted wall and got paint all over her ears. But maybe that wasn’t so unexpected after all. 😉

Have you done any little projects around the house lately? Any observations to add?

Houses in France: Observations while trying to find our new home

A few pieces of home in my new home in France

We all need a home