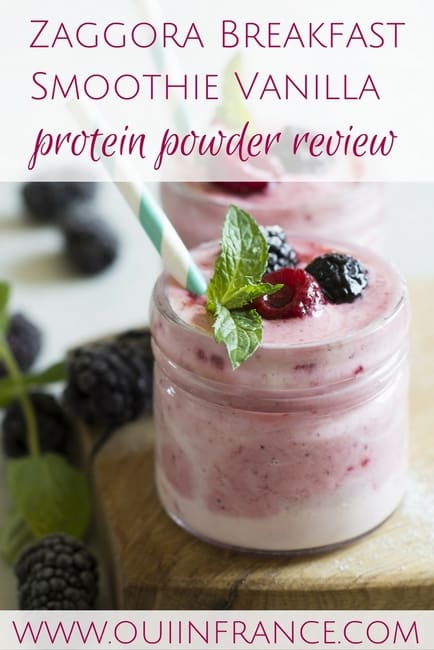 I’ve been on the hunt for a vanilla protein powder to mix with fruit for a quick breakfast smoothie but have come up short time and time again. Either the powder I buy isn’t palatable or it’s just not something I’d ever buy again. Half of the brands I’ve tried have wound up in the trash over the years and the other half I reluctantly finished. I gave up on finding something I liked until recently when I saw Zaggora’s line of Breakfast Smoothies in my Facebook feed. I wanted to get more info, so I turned to Google to see what people thought about this new line. Aside from 1 review which said it was good, I couldn’t find much on the Zaggora Breakfast Smoothie – Vanilla flavor, so on a whim, I bought it.

Read on for my Zaggora Breakfast Smoothie review!

My absolute favorite protein powder is Fit 365’s Vanilla Shake. It tastes good on its own but is absolutely delicious with a banana, peanut butter, nut milk and ice. Or any mix of fruit. But it’s not the cheapest around and there’s no international delivery, so the cost to reship it to myself makes Fit 365 out of the question except for the 2 bags I bring back with me when I visit the USA.

Unfortunately, my luck trying vanilla protein powders in France hasn’t been great. Shakes are subjective and one that I find delicious might make you gag and vice versa. I bought a 40-some euro tub of Vega after reading mostly positive reviews and the sweet taste turned me off. Combine that with the grossness and I couldn’t even choke it down. Money down the drain.

I go through food phases that last a couple of weeks where I’ll want something daily and then get sick of it. Since it’s summer now, I’m in smoothie mode and a refreshing, nutritious drink for breakfast is perfect, especially if I don’t have time to make anything more elaborate. 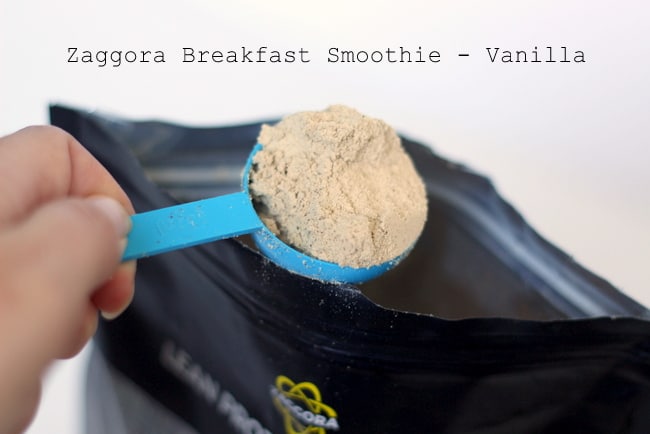 Here’s what I was looking for in a protein powder:

I knew of Zaggora’s line of workout apparel but didn’t realize they had expanded into the smoothie market and had a European site in addition to the American one. I was getting hit with their ads daily on Facebook, so I gave in.

“It combines spirulina, wheatgrass, green tea, beetroot and carrot to deliver the potent power of these amazing foods easily into your diet. We’ve also included aloe vera, chia seeds, flax seeds and lucuma to give you natural sources of Omega 3 and fibre.”

The smoothie is also only 75 calories per serving, vegan, and gluten free. It was designed for women by women.

On the nutritional front, it’s high in fiber, has pre and probiotics for a healthy gut as well as digestive enzymes to aid the absorption of nutrients, and is high in vitamins.

Sounded good to me. I was sold.

Packaging: 4/5: Attractive logo and bag with an easy zip-top seal and clear nutritional info on back.

Taste: 2/5 alone with just liquid and ice & 4/5 when mixed with raspberries (see below for more on that) : I wasn’t impressed with the taste until I found a mix of fruit that worked for me. 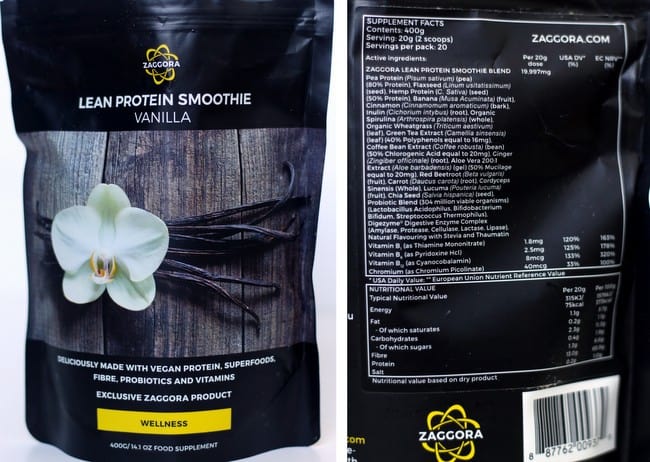 For the ingredients, calories and my needs, Zaggora gets a 5 out of 5 from me. But on taste? That’s a different story… but it ends well! 😉 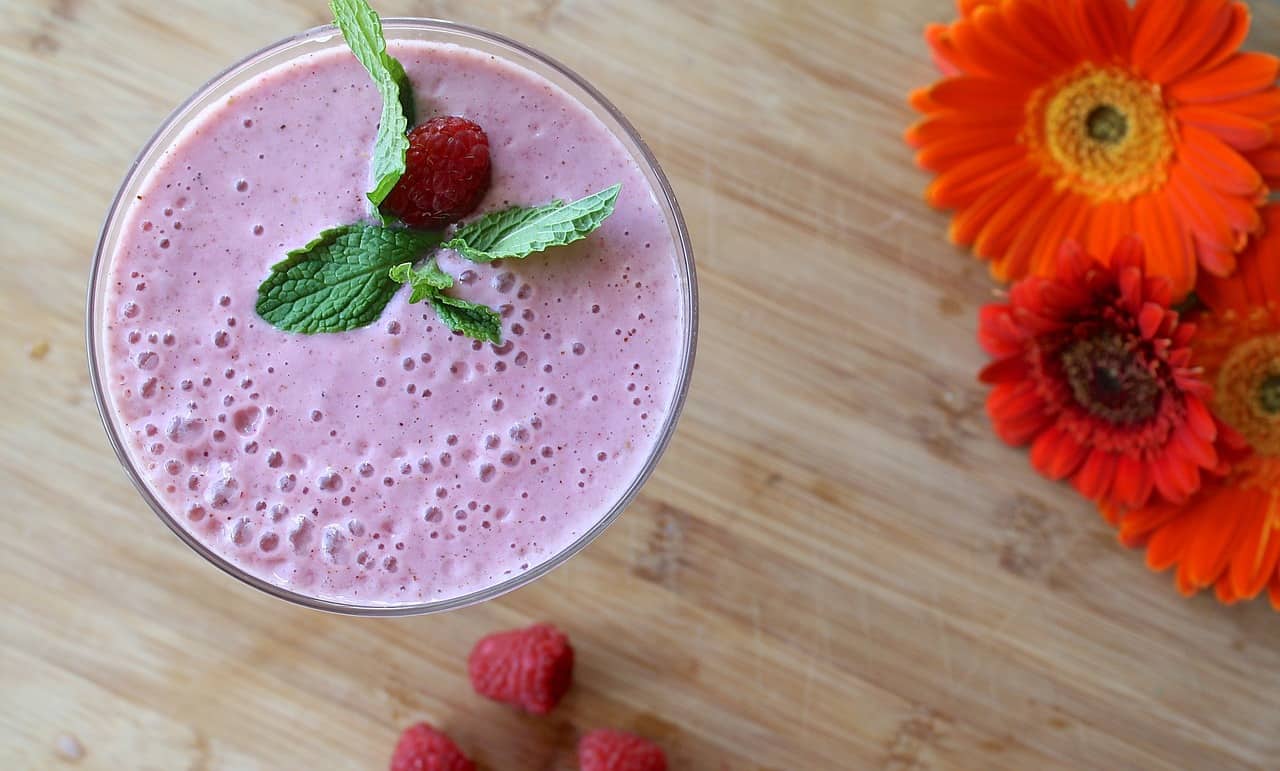 Mixed alone with just water or milk and ice, the Zaggora Vanilla is barely palatable.

I could drink it but I had to force myself. The taste was far from ideal and I immediately regretting buying it.

I tried it with a banana and nut butter and it was slightly better but I still wasn’t in love. At his stage, it was just OK.

After a few days of trial and error, I found the fruit combo that worked best for my palate — banana and frozen raspberries.

The sweetness of the raspberries masked the taste that I found off-putting. When mixed with berries, the smoothie was not only palatable but actually quite tasty! I could no longer taste the vanilla taste that I hated.

For me, this is the only way to drink it: 2 scoops of Zaggora Breakfast Smoothie – Vanilla powder, half a banana, handful of raspberries, ice and water

It’s actually really good this way. Keep in mind, you might love it plain or with just a banana. For me, berries are a must!

Bottom line on taste: Alone, the smoothie is bordering on terrible. With fruit, it’s just OK. And with raspberries, it’s great and something I feel good about drinking!

So now that I’ve found a fruit mix that works for me, I’ll be finishing my bag. Will I buy the Zaggora Breakfast Smoothie line again? Jury is still out. I’d ideally like a vanilla protein powder that mixes well with all kinds of fruit and even tastes good alone. I see Zaggora makes a couple of other flavors but I’d be hesitant to shell out 29 € per bag on something I’m not sure I’ll like.

Do you have a favorite vanilla protein powder? 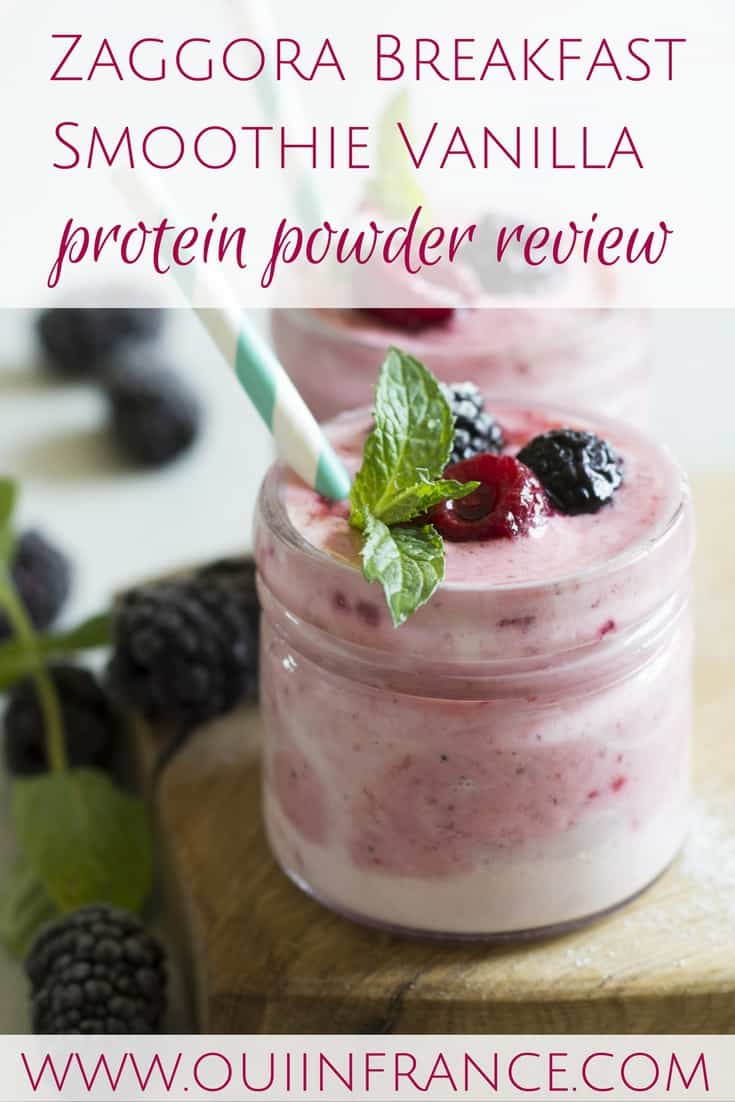 Disclosure: I bought my protein powder with my own money and was not compensated for this Zaggora Breakfast Smoothie review.

Healthy protein bars you need in your bag

« Les marques du moment
Expat depression: Dark side of life in France (and where to turn for help) »