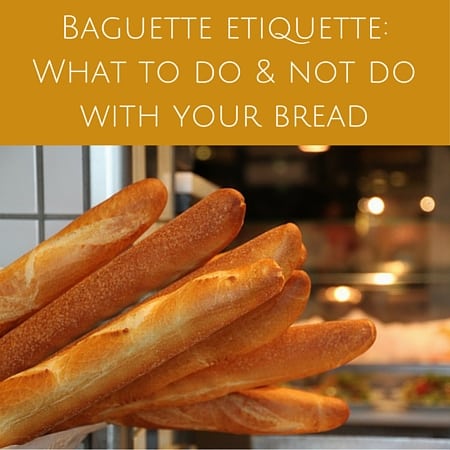 Ask anyone what foods France is known for and I’m sure the word baguette will tumble out of their mouth first or right after Brie or escargots. A French meal is not complete without a perfectly baked baguette, so next time you have French guests or want to have a meal the French way, take a look at my baguette etiquette lesson. It won’t steer you wrong!

Baguette in France etiquette: How to eat baguette

Good thing I’m not French because I’d be a sorry excuse for a French person. I’m a wannabe at best because the truth is that I rarely buy baguettes. French people LOVE baguettes and the stereotype of French people with a baguette under their arm is 100% true.

But me? Well, I pop into my local bakery to buy a baguette twice a month or even less frequently. Why? It’s not right in my neighborhood and I never finish the whole baguette anyway and feel bad wasting it. Yeah, I know they’re cheap and I can ask for a demi baguette instead, but I’m just not in the habit of buying fresh bread daily. That’s really a French thing.

I’m happy to have sandwich bread if I’m in the mood for toast or a sandwich. I’ll happily eat some baguette at my in-laws’ or when they’re here, but I just don’t go out and procure fresh baguettes every day. My husband doesn’t really care either. The horror! I know!

What we do love is some fresh pain de mie (for those sandwiches I mentioned) or a boule. There are so many varieties of French bread. 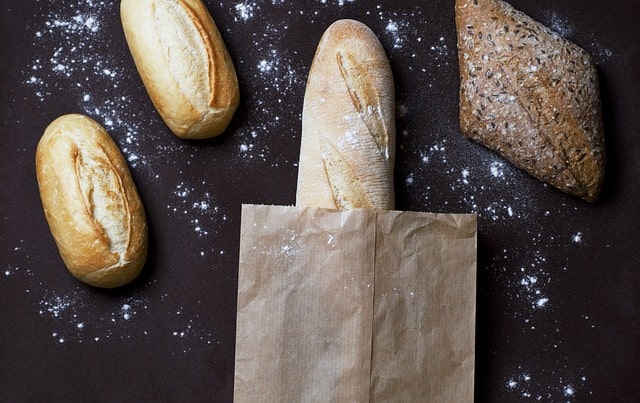 If you’ve ever been to France, you’ve seen just how serious the French are about their baguettes. For sopping up sauce, eating with cheese or even with some jam at breakfast, baguettes are a must in most French households and it’s safe to say French boulangeries will not be going out of business anytime soon.

Over the past couple of years, even though I’m not a die-hard baguette buyer, I’ve learned enough about the French and their baguettes to confidently give you some tips on baguette etiquette.

Go to a boulangerie.

First and foremost, if you’re having French guests, NEVER forget to buy bread. Get the bread from an actual bakery and not the grocery store. The bread at grocery stores is fine, and even great in comparison to the bread we get in the US, but for the French experience and the best quality fresh bread, head to the boulangerie where bread is made fresh from scratch multiple times per day.

Even if you’re having a Chinese meal or something that you may not normally buy a baguette for, if you have French people eating at your table, be sure to buy a baguette (or two). Before the meal is served, slice it into pieces and put them in a bread basket that will accompany the meal on the table. Make sure there’s some left for the cheese course at the end!

Some families are more casual and leave the entire baguette on the table. It’s passed around and each person rips off a piece as they eat their meal. That way, there are no cut pieces left over that will then go stale. But keep in mind at a more formal dinner at someone’s home or at a restaurant, baguettes are usually sliced into pieces already.

Dining out in France? Tips you need to know before you head to the restaurant >>

No bread plates necessary. And no butter either!

Wondering how to serve a baguette? Slap that hunk — I mean slice — of baguette right down on the table next to your plate. There’s no need to set the table with a separate bread plate. The French place their bread next to their dinner plate directly on the table, crumbs and all. Totally fine to do.

Be aware that the French don’t eat their baguette with butter. If you’re the host, feel free to put out some butter for yourself but the French will most likely not touch it. If you’re dining at a French person’s house, they didn’t forget the butter. It’s not coming! Take the lead from the French people around you to see what to eat with baguette and how to eat French bread. 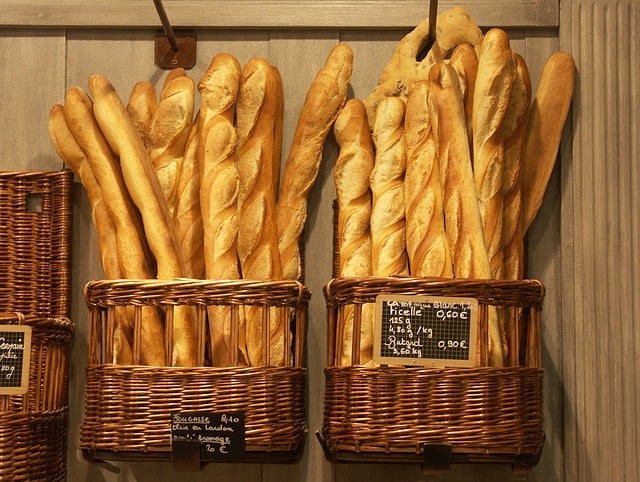 Pick up a fresh baguette more than once per day.

If you’re having a proper meal in the evening, don’t think that baguette you picked up at 7 a.m. will suffice. The French are the baguette’s harshest critics and rightly so. Last time I was at my in-laws’, my father-in-law complained that the bread for dinner (that was purchased at noon) wasn’t fresh enough and tasted too soft and chewy. It tasted just fine to me, but to prevent this sort of unpleasantness and feeling like a baguette-buying failure, get fresh bread just before your meal!

What we can learn from eating like the French >>

All baguettes are not the same. And not the only kind of bread!

Not all baguettes are created equal! Have a look at all the different types of baguette-shaped breads while you’re waiting in line at the bakery and try to figure out what it’s called if you can make out the scribble on the slate. Or just point. That works too.

Check out the boules and even the specialty breads that may have pieces of dried fruit or nuts. They’re all worth a try and are usually priced by the kilo. Want just a regular baguette? Ask for une baguette ordinaire s’il vous plait. They’re 70 centimeters long.

David Lebovitz explains, “La baguette ordinaire by law, can only have three ingredients: flour, yeast, and salt, and must weigh 250 g. These guidelines were set up a decade ago to prevent the quality of bread from deteriorating and to maintain the standards of this all-important staff of French life.”

But an ordinary baguette is not the best baguette. It is the cheapest though. My fave? I like my baguette like my pizza. Bien cuite (well done). Try the tradition variety well done for what I think is the best baguette you can buy. It has wheat flour and pointy ends.

Also, baguettes and French bread varieties have different names, so get to know them all. (Whatever you do, don’t call it regular bread like I did in this funny story or you might confuse someone!)

Store it in the bread drawer/bread receptacle in between meals.

Unlike me, don’t mistake the bread bin for a garbage can when you’re visiting a French person’s home you’ve never been to. These drawers/containers keep bread fresh and sure beat leaving it out on the counter to harden and get stale. The next morning with your coffee, pull out your perfectly preserved baguette, pop it in the toaster, and slather it in jam. Yum!

Any baguette etiquette tips to add? How do you eat baguette? 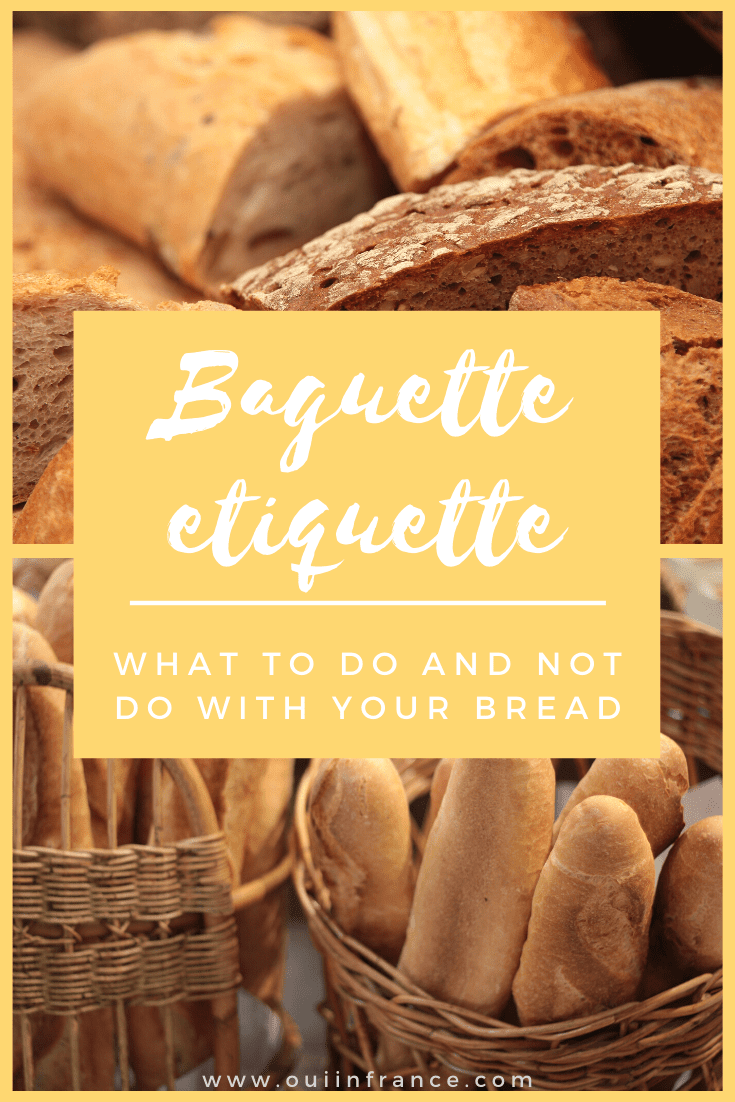