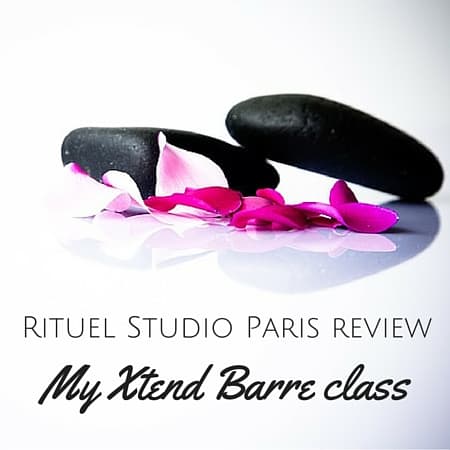 While in Paris for a few days last week, I was on the hunt for a fitness class and decided on Rituel Studio‘s Xtend Barre class. It would be my first bar class in France (and first time trying the Xtend Barre method) and I was looking forward to it after an afternoon of travel. If you’ve been reading my blog for any length of time, you know I majorly miss going to studio exercise classes since there aren’t any near where I live. I was pleasantly surprised to see Rituel Studio’s offerings so I signed up online, paid my 27 euros and made my way to class…

Read on for my Rituel Studio Paris review!

Located in the 6th arrondissement not far from the Tour Montparnasse, Rituel Studio is situated on the other side of a courtyard and not visible right from the street (except for a portion that doesn’t seem to be connected to the main studio that is sometimes used for spinning classes). I arrived in front of the door and all I saw was a digicode and a sign with the studio’s name and number. I checked my email to see if the code to open the door was in the confirmation email but it was not. I guess you have to ask them for the code? Anyway, I was about to call the studio to open the door when some guys were leaving, so I slipped in before the door shut and saw the beautiful studio across the courtyard. It had a couch, some merchandise for sale and cubbies to store your shoes.

There were a few rooms depending on what class you were taking. Rituel Studio offers Gyrotonics, Pilates, yoga, Xtend Barre and more and now only offers spinning on a limited basis because it’s not popular (bummer, that’s the class I wanted to take after trying Dynamo Cycling last time and pretty much having the same lackluster experience as this girl).

Before I go any further, let me point out I’m a discerning customer. I’ve taken many studio classes that I’ve saved my hard-earned cash for and at 27 euros/class, I wanted to walk out of my Rituel Studio Paris class feeling physically exhausted yet on top of the world. Did I? Not exactly. 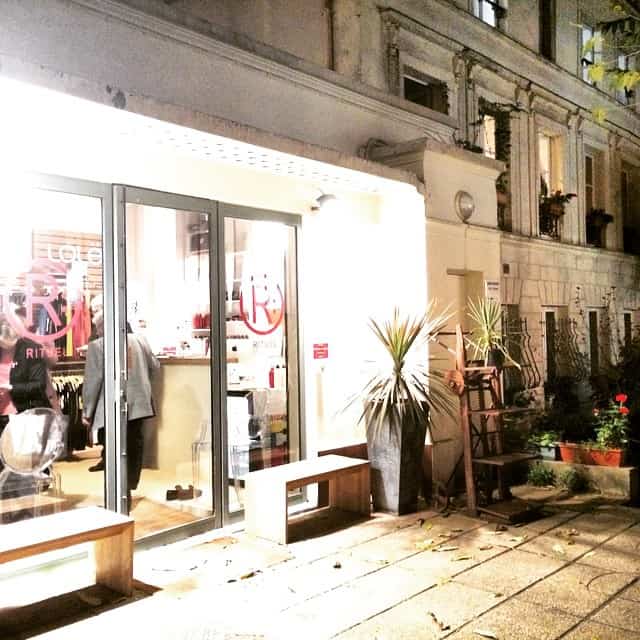 Here are the details of my Xtend Barre class at Rituel Studio Paris:

Before my Xtend Barre class

Upon arriving, I let the woman at the front desk know it was my first time and she showed me where to put my things and directed me to the studio. It was a nice space with a mirrored wall and ballet barres on the wall similar to barre studios in the US. I chose a spot at the back (non-mirrored wall). Also, something I found different was that the floor was not carpeted like barre studios in the US. I had socks on but some people were barefoot.

I was a few minutes early, so I sat down and a woman with a clipboard, who seemed to be the instructor, walked in. She came around to each person to check off their names and she told me she was English and most of the people in the class seemed to be native English speakers as well. Cool! Being American and all, I had no problem with a class in English. But this wasn’t noted on the website when I signed up, so if I was a French woman who had no English skills, that might put me off if I walked into a class taught in English without knowing ahead of time.

I let the instructor know it was my first time and asked if I needed to get any equipment and she told me I needed a ball and light weights and pointed me to the boxes at the side of the room. I know every studio is different but I expected the instructor to introduce herself, welcome everyone and make an announcement or something before class letting people know what to expect (I wasn’t the only newbie) instead of me asking her what equipment I’d need. But there was no intro. Class started on time and we were off…

There were about 10 women total in class, 3 of whom arrived a few minutes after class started. Most were in their 20-30s but a few ladies were a bit older and there were all different body types. Some women were in full-length pants and fitted tops and others were in oversized tshirts. Some seemed to be beginners and others looked to be more advanced. The other women in class made me feel at ease. It was nice to see mixed levels.

Differences between French and American gyms >>

Price: 27 euros for 1 class. I’ve taken a wide variety of studio classes in the US and the pricing at Rituel Studio is in line with NYC as far as pricing goes.

It was my first time doing Xtend Barre so I don’t have anything to compare it to. We started out with a warm-up, then used light hand weights for upper body work (I grabbed 1.5 kg after the instructor’s suggestion), worked our legs, butt, abs and all the regular things you do in barre class. Some of the moves were new to me and I enjoyed the variety!

I noticed the instructor didn’t point out any modifications for the exercises so if you weren’t able to do a particular move, you just tried your best or modified it on your own. Our instructor had perfect technique and was really fit. The music was fun and fit nicely with the flow of the class, but the instructor didn’t use a mic and sometimes it was hard to hear over the music despite the room being small.

As I mentioned, I chose a spot on the back wall without a mirror.  This wasn’t the smartest move because I found myself having to turn around when we were doing moves facing the wall to see the instructor. If my wall had been mirrored I could have seen her in the reflection without having to stop and look behind me.

While I had sweat dripping off my face (room was really hot) and enjoyed myself, the class wasn’t super difficult. I wasn’t sore at all the next day and was disappointed about that! I never found myself looking at the clock and really liked the pace of the class and that we didn’t stay on one exercise too long — each move was maybe only 10 reps so I never got bored. I feel like we only pushed ourselves 70% of the way, though. I never felt like I was pushing myself until failure. For me, part of the fun of barre class is when your legs shake and you’re challenged to the point of mentally doubting yourself, but this class never quite got us there. I’d rather take a challenging class that you could modify to make easier if necessary than a class that stays manageable the whole time.

Overall, I felt I did work my muscles — the class wasn’t easy and I found myself taking a quick break and then jumping back into a few exercises. There were challenging moves, but I don’t feel we did enough reps to get a real burn going. I wanted more!

Is this indicative of Xtend Barre in general? Is it easier than Pure Barre and others I’ve tried? I don’t know. I’d like to try another instructor and see for myself.

After class, we were asked to wipe down our mats and then I was on my way! 😉

Bottom line: I can’t speak to other offerings at Rituel Studio Paris, but the Xtend Barre class I took was good but not great — not worth the 27 euro price tag in my opinion because it never became truly challenging. As with most studio classes, Rituel Studio is pricey and I don’t feel I got my money’s worth. If you’re a beginner or looking for a moderate intensity barre class, this might be for you. The other classes at Rituel Studio looked really interesting so I’d love to try some of them next time. Try for yourself and let me know what you think!

For anyone out there reading, does Xtend Barre tend to be easier than other barre classes? Was it maybe just my particular class? Do you have a favorite Paris studio for me to try the next time I’m there? I’d love to hear from you!

barre3 online reviews and what I do for fitness in France

How your health & fitness routine changes when you move abroad