There’s something about French guys… and you just want to hear what they have to say! I’m often asked what my husband thinks about American culture, food, the people and more. Curious minds want to know what French guys think about all kinds of things, so today, my husband, Tom, is bringing you the second post in a new series called The Frenchman speaks: Ask Tom Tuesdays. He’s answering your questions about whatever you want to know….

Again, I want to extend a BIG THANK YOU to my husband for being a part of my blog. It’s not easy to write well in your second language and he makes me really proud. Let’s do this….

Question: An earlier post of Diane’s mentioned that you’re a twin and you and your brother got asked a LOT if you were twins by random people in New York last year — something that doesn’t ever happen in France. It was of particular interest because I’d totally ask someone that and think nothing of it. What other social differences do you notice between Americans and the French? –From a reader named Christine

So to start, I find that Americans tend to be more enthusiastic about social interactions.

Just to give a quick example, we were recently back in the U.S. and happened to be in a little gift shop on the Jersey Shore. When the college-age cashier heard my accent and learned we live in France, she was over-the-top excited about it and said several times, “Oh my God, that is SO COOL. That is the coolest thing I’ve EVER heard.”

She was really excited and had a lot of follow-up questions. It was an enthusiasm I’ve heard from others in the U.S. when they see I’m French and something you’d never get in France. The French are just more reserved and in a casual situation where you don’t know the person, there are boundaries as to what’s polite in conversation.

I’ve also noticed that the conversation subject matter tends to be more open with Americans, like personal topics are discussed, even if people don’t know you — about family, where you’re from, where you’re going, etc. In France there’s a social “convention” that makes us not ask about something we consider private. The boundaries here in France are not the same.

The private “sphere” is considered something very important, almost “sacred” (or holy), and is to be respected.

It would be considered really rude to cross that boundary with strangers. It’s also what marks the difference in the degree of friendliness/friendship. What is just “small talk” in the U.S. might never happen in France. 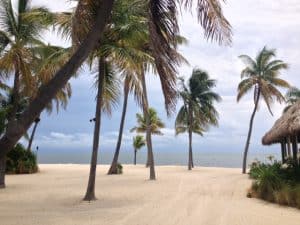 To further explain, here are some recent examples of questions that come to mind that you wouldn’t ask in France casually (and questions I was surprised people I didn’t know would ask me in the U.S.): Are you twins? Where did you meet (after knowing I was married to an American), Where are you from (asking Diane who is clearly American, just in passing when in the Keys or Southern Florida in general).

In France, Diane is sometimes surprised about this aspect of French “manners”; it makes her sad sometimes that people don’t ask questions like where she’s going on vacation or follow-up questions after she says something — because it makes her think that people don’t care, whereas they’re just “respecting” the boundary of private space. They’re just being polite by doing that!

So while asking certain more private questions in France appears rude, it’s normal in the U.S. and even welcomed. Not asking those questions is seen as polite in France when it’d be almost proof of disinterest in the U.S.

In France asking too much is seen as curiosity, which isn’t seen as something good/polite.

So yes, it appears that when talking to them, American people want to know more about you than French people would want to know — or at least publicly admit to.

Now is that the truth? Are American people really more interested in each other, or is that only a superficial habit that’s the norm?

I don’t really know. It makes me think of the phrase you almost hear every time you enter a store or restaurant in the U.S. — yes, you know that sentence, the famous “Hi, how are you (today)?” (I’m not even talking about the, “Hey what’s up?” that you hear at Abercrombie stores!!!)

Now we all know that everyone’s answer is, “Good, thank you” (or something like that). Has anyone ever responded in the history of the world, “Well, actually, I don’t feel good today. Let me talk to you about my problems…” to a cashier or waiter?

We also say in French, “Bonjour, comment ça va?” but we say that between people that know each other, at least a little bit (coworkers, friends, acquaintances you see often), and the expected answer is pretty much the same (except maybe when it’s a close friend to who you know you can really talk about your private life and your potential problems). I think I’d be caught off guard if upon entering a store in France I heard, “Bonjour, comment allez-vous?”

(Although French people also show politeness — which Diane wrote about French politeness a few months ago — even sometimes too much, with the all variety of “bonjour, au revoir, merci…”. Diane actually loves the “bon dimanche” (have a good Sunday). It’s what cashiers say when you leave the boulangerie on a Sunday, after purchasing your bread. And the “worst” is when someone tells you thank you (merci), you reply “you’re welcome” (je vous en prie / which is the formal way of saying “de rien” that you’d say to someone a little more familiar) and some people even say “c’est moi” (you can also hear “mais c’est moi”), meaning “I am the one who thanks you.”) 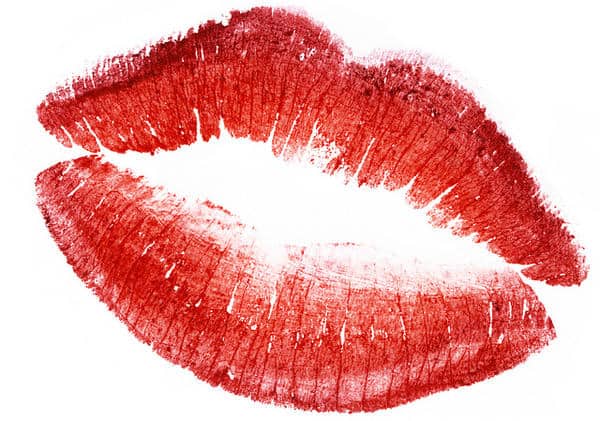 The fact that in social interactions American people seem more “familiar” and talk about personal things with strangers than French people makes it almost contradictory that in the US you don’t kiss (do bisous). The cheek kiss is what we do in France instead of a hug or handshake (although in some social settings a handshake is normal, like in business or someone you don’t know that well).

Of course we don’t do cheek kisses with complete strangers but with relatives, friends, coworkers sometimes, friends of friends (when being introduced). It seems that the French are more reserved socially but when it comes to physical contact, we go right in for the cheek kiss and Diane finds it a bit uncomfortable. She’d much rather hug. She even hugged my dad once and he just stood there totally confused. Now she does bisous. 😉

In France, we don’t “joke” with food. We take meals seriously and it’s a part of the way we socially interact with people (the big meal on Sunday). Also, when you invite people over, you don’t invite them for sandwich or just a little meal. You have to put up the big show (several courses, from the “apéro” to the dessert and even the digestif) and you stay at the table for hours (almost like Thanksgiving dinner every Sunday). We don’t graze or serve a quick little meal.

And what about taboo subjects

In the U.S., you don’t really talk about someone being fat to their face. It’s considered rude to tell a relative that he/she gained weight. It seems rather taboo there, while in France people can talk about it (say you gained weight, even say it to a friend) and it’s not seen as an insult. Just matter of fact and that’s not something that would be a welcome conversation topic in the US.

I noticed that on the NYC subway, New Yorkers just act too cool to care about anyone else on the train. They don’t make eye contact and try to just look past others around them. But on the Paris metro, it’s totally fine to make eye contact. We don’t stare others down but it’s OK to look at someone. (Diane’s note: I was definitely involved in a few staring contests on the Paris metro with my friend Melissa a few years ago on vacation. Men and women equally hold their glance a few seconds too long making it uncomfortable for a former New Yorker. I looked away the first few times but then figured out staring contests were kind of fun and won a few after the French person got uncomfortable. Took maybe 4 seconds.)

So readers, what differences have you noticed with social interactions between Americans and the French? Did any of Tom’s answers on French social differences surprise you?

Do you have a question for Tom?

Submit your questions in the comments below, via email here or on Facebook or Twitter. Maybe you’ll see it answered in a future post (hope to run this once a month or whenever Tom has time). And as always, thank you for stopping by! 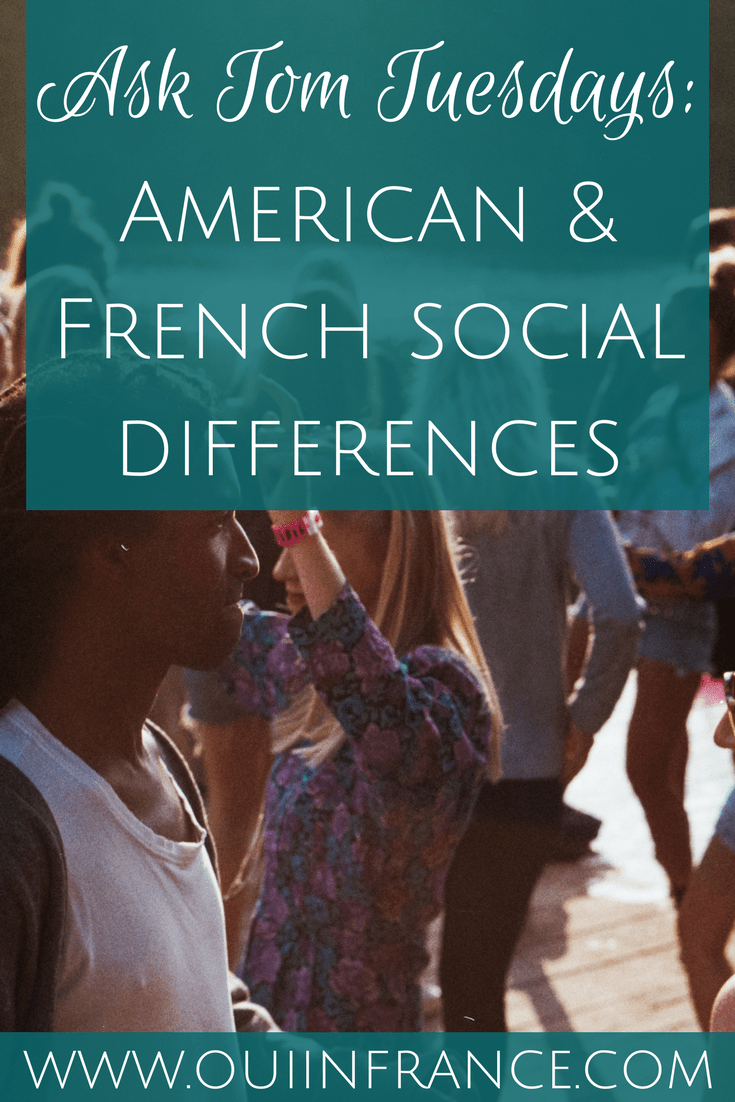