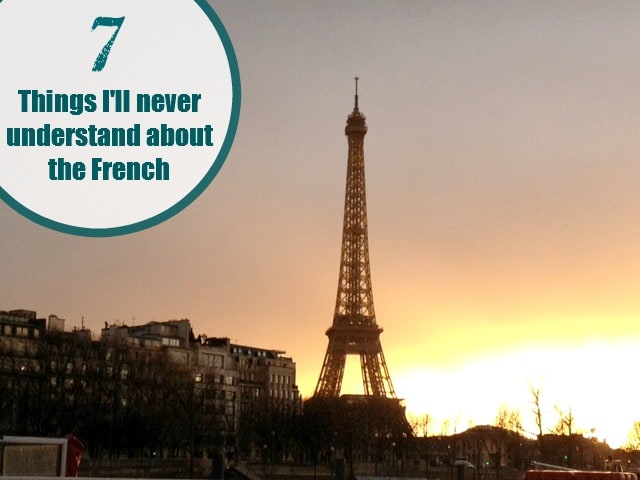 I’ve been in France nearly three years now and have made great* strides in understanding the French people, the language and culture and the general day to day. But despite this, there are a few things I don’t think I’ll ever understand about the French (even if I adapt). So here they are…

*depends on your definition of the word

1. When is it bonsoir time?

That magical hour where you switch from saying bonjour to bonsoir is just as elusive as a friendly customer service department. Does bonsoir start at 6 p.m.? When it gets dark? When it is almost dark? I’ve tried all of these and have said bonjour at 6 p.m. in the summer when the sun is still shining just to be greeted with a bonsoir. It’s no big deal but I’d like in on the little piece of knowledge on when it’s time to say bonsoir. (French people seem to not have a hard-and-fast rule on this.)

Not sure about you, but I like convenience (only second to being comfortable). So my American self has learned to show up earlier to stores and plan a little better since 11 p.m. grocery store runs don’t exist in France. Nobody’s ever heard of Wawa or 7-11 around here apparently. But let’s be reasonable. I’m a reasonable person. 11 p.m. is late but come on, how about 9 p.m. That’s a reasonable time to close up shop. It allows for those who work to pop in on their way home and for those who eat dinner on the early side to hit up a store or two after dinner. But 7 p.m.? Just nope. And don’t get me started about Sundays. Or lunchtime.

Yes, of course there are exceptions – let me be clear about that — and not every store in every town closes at 7 p.m. But take for example our stroll through Angers last night. It’s a decent-sized city but we were rushed out of Fnac (French Best Buy) at 6:55 p.m. and the doors were being shut at all the stores at 7 p.m. On a Saturday. I just don’t get it. But that doesn’t matter in the least because I live in France so I now play by France’s rules. 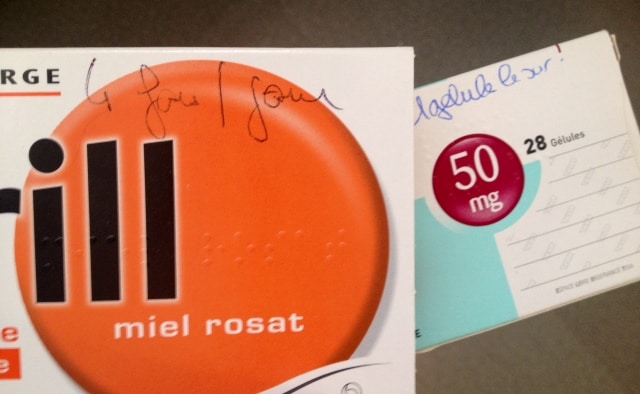 3. Why do you get more than you need at the pharmacy and why can’t they use labels?

Maybe it’s the American in me but it seems awfully wasteful to give someone an entire box of medicine if they only need 3/4 of the pills inside. You see, in France, if the doctor puts you on antibiotics for 7 days and you’re instructed to take 2 pills per day, you don’t just get 14 pills. And you certainly don’t get them in a little child-proof container with a lid complete with your name and instructions all typed up. You get the whole box of pills regardless of the inevitable leftovers and the handwritten instructions will be scrawled on the side of the box. (The pic above is pretty tame and is strangely legible. I guess I threw out all my old boxes with sweet scrawl.)

I think bad penmanship is a prerequisite to be a pharmacist in France or work at the French pharmacy. Seeing a half-legible scrawl crammed into the tiny white space on your medicine box might not be the safest way to instruct a customer on how to take their medication. But what the heck do I know. Anyway, open any French person’s medicine cabinet and you’ll see half empty boxes of all kinds of things. Not even joking. 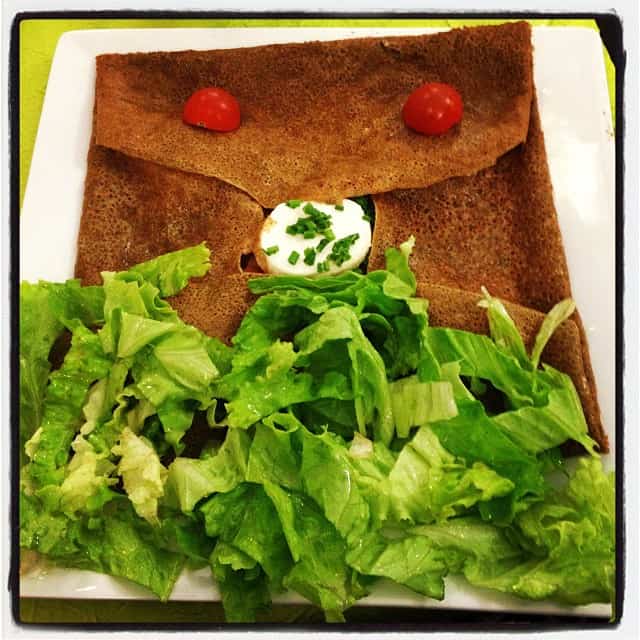 4. Why does the salad come after the meal?

At any given dinner whether you’re at someone’s house or at a restaurant, the salad course is always enjoyed after the main course. The salad is not an appetizer or something to put alongside your main course but a palate-cleansing plate of greens that will always come after you’ve stuffed yourself full of whatever fish or meat was on the menu. Don’t know about you, but I love kicking off my meal with salad. It’ll fill me up a little so I don’t gorge myself on the duck later on and eases you into what’s to come. But in France, expect it after you’re full. Ugh. (The pic above was my friendly-looking galette from last night’s dinner at La Table Ronde complete with a salad. Happy camper here! ;-))

Yeah, I’m serious. If your home has a television set, you pay a tax. See how ridiculous this is? It’s like asking if your home has walls. TVs are ubiquitous these days so when the inspector comes around to verify if you have a TV or not (they have the right to verify if you do indeed have one or not if there’s any question), you should do what Tom did back in his old apartment (I’m serious). Keep the volets drawn (see how useful volets can be?) when it’s TV tax time so the inspector can’t see in from outside — and don’t answer the door if you don’t know who it is. He got away with not paying for a year!

And it’s not chump change. How much is the tax, you ask? About 130 euros this year for metropolitan France! Jeezus. It’s called la redevance audiovisuelle and you pay the same fee regardless of how many TVs you own — just one tax per household per year. It apparently supports French public TV stations. What’s next, a toilet tax? Ssshh, don’t give ’em any ideas.

The French pay for their bank accounts and debit cards and it’s not cheap. For great service, you ask? Not really. The banks have short hours, especially in small towns (open at 9, closed for 2 hours at lunch, and then close at 5pm in the evening) and aren’t super helpful anyway Tom’s card expired in May and it took them a month to send him a new one. Twice actually because they didn’t know what the new PIN was. A debit card is a necessity for daily life in France.

Anyway….A normal debit card will run you a yearly fee of about 20 to 30 euros in France to get and then a basic checking account will be minimum 5 euros/month. Ours is “fancy” I guess and it’s 11. WTF? I love my TD Bank at home. Free checking. Free card. Opening a bank account requires a bit of patience as well. 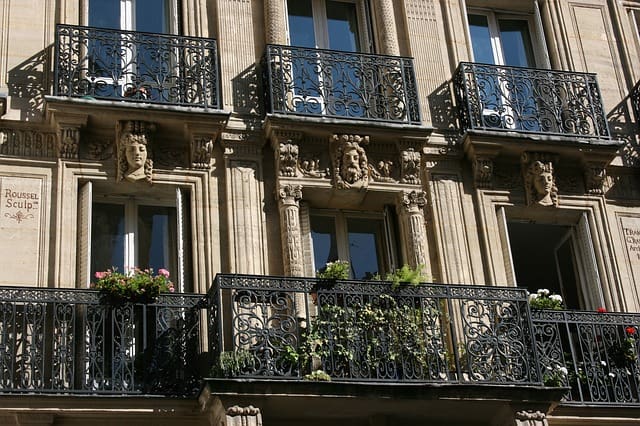 7. Why are there no screens on windows?

My bug bites pretty much explain why I think this is nuts. Screens might not be super pretty but they do serve a purpose. It’s only logical to put screens on windows — but French homes do not have screens. At all. One might deduce that the French aren’t logical… but I digress. Between bugs in the house and bugs biting your skin, screens really are the easiest solution but the French don’t seem to agree. So yup, I’m the house with duct taped screens on the windows.

10 Biggest French faux pas you can commit. And why #7 is the worst.

« What I’m loving lately
Dining etiquette in France: How to wow your French dining companion »