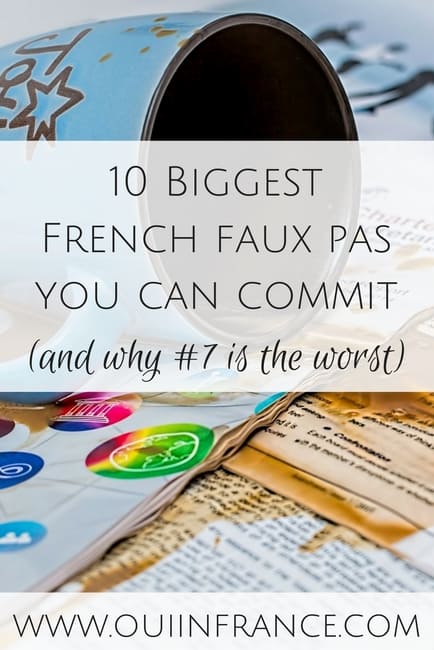 Once upon a time, I arrived in France thinking I could speak halfway decent French and knew enough about the French way of doing things that I’d be right at home. But as time went on and I started to interact with more French people, go out to eat and go about my day-to-day life, I realized that I didn’t know as much as I had thought.

Here are the biggest French faux pas you can commit and why I think #7 is the worst.

This is by no means an inclusive list and it’s not the end of the world if you commit a faux pas below, but they are things to keep in mind when adapting to French culture. 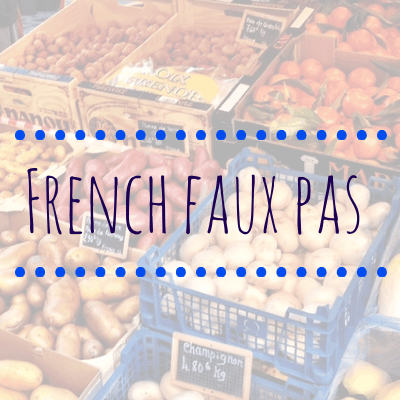 Here are few of my favorite French faux pas:

1. Eating dinner before 7 p.m. In some circles, a meal before 8 p.m. might be a no-no! Back in the U.S. when I was young, eating dinner at 6 p.m. on a cold winter day was normal. It was dark, we were hungry and it was time to eat. Not so in France. Dinner seems to be no earlier than 7 p.m. and even that is on the early side. 8 p.m. is pretty normal and 9 isn’t too strange. I’ve definitely had to adjust my habits.

2. Asking for a well-done steak. I think it pains my father-in-law to char my steak to the point of being well-done so at this point, I just eat the meat medium and I’ve actually gotten used to it. I actually eat a ton of meat in France.

3. Eating your salad before the main course. The French eat their salad to finish the meal, not to start it! This varies by region somewhat but generally a salad is eaten after the main dish.

Wow your French dining companion with my must-read tips >>

4. Touching fruit at the marché. Sometimes there are signs to remind you to keep your paws off the produce, so if you see one, obey! The vendors will handle it for you most of the time — just point. (I wrote a piece on marché know-how here if you’re curious.)

Dining etiquette in France: How to wow your French dining companion! >>

5. Friendly conversations getting too friendly. Beyond a simple hi and small talk about the weather, try to zip it. I found out after the fact that asking my pharmacist (who I’d known for a year at that point) about his family vacation wasn’t normal, polite conversation (where it would be in the U.S.). Oops. Tom wrote about the social differences in this Ask Tom Tuesdays post.

6. Being too direct. There are subtle nuances to the French language that you might not notice at first, but they’re there. Sometimes Tom’s email interactions or phone conversations with customer service people leave me laughing and wondering why it seems like we’re almost apologizing for bothering them about THEIR mistake. And in regular conversation, skipping the niceties to get the point might seem too abrupt or even rude to a French person. So play the game. Be polite.

7. Going in for a hug instead of bisous. The first time I met my now father-in-law, I greeted him with a big, friendly American hug. And he just stood there, frozen. I learned real fast not to repeat the greeting with my mother-in-law. You see, French people find hugs extremely intimate (read: reserved for lovers) and instead greet friends and family with cheek kisses called bisous. The French would not only be surprised and find it awkward to hug (how long do we hug for?, where do I put my arms?, do I hug back?, etc.), but they’d be extremely embarrassed and find the whole exchange super uncomfortable due to the physical contact. Trust me on this French faux pas!

8. Mixing up tu and vous. Tu and vous both mean “you” but it’s not always so cut and dry. If you’re a foreigner, you’ll be forgiven for this French faux pas, but remember that if you don’t know the person well or they’re in a position of authority (doctor, cop, old lady at the grocery store), use vous. And if you’re not sure, always err on the side of caution and use vous. (Tom’s doing a post on the subtleties of tu versus vous soon because it’s really wacky sometimes)

9. Addressing someone by their first name. The French are formal when it comes to many things and addressing someone you’re not really friends with by their first name is a no-no. It really might not seem like a big deal but it is a major gaffe. So your pharmacist is Mr. DuPont, not Pierre. The client at work is always Mr. French Guy. Basically, anyone you don’t interact with on a daily basis — or anyone in a professional context — gets a Monsieur or Madame unless they tell you otherwise. The French keep that distance and don’t get too familiar. I have to force myself to do this and if anyone calls me Madame My Last Name, I always say, no no it’s Diane! (Tom just admitted, “Sometimes it’s so weird in French.” Agreed.)

10. Forgetting your manners. Upon entering a store, say bonjour and make sure you say au revoir upon exiting. That’s good life advice anywhere! When arriving in a doctor’s waiting room, say hi to everyone as you sit down. It’s really bad form to forget simple words like merci and bonne journée. Be more socially polite than your American instincts tell you to be and you should be just fine. It’s the French way!

What do you have to add to my list of French faux pas? 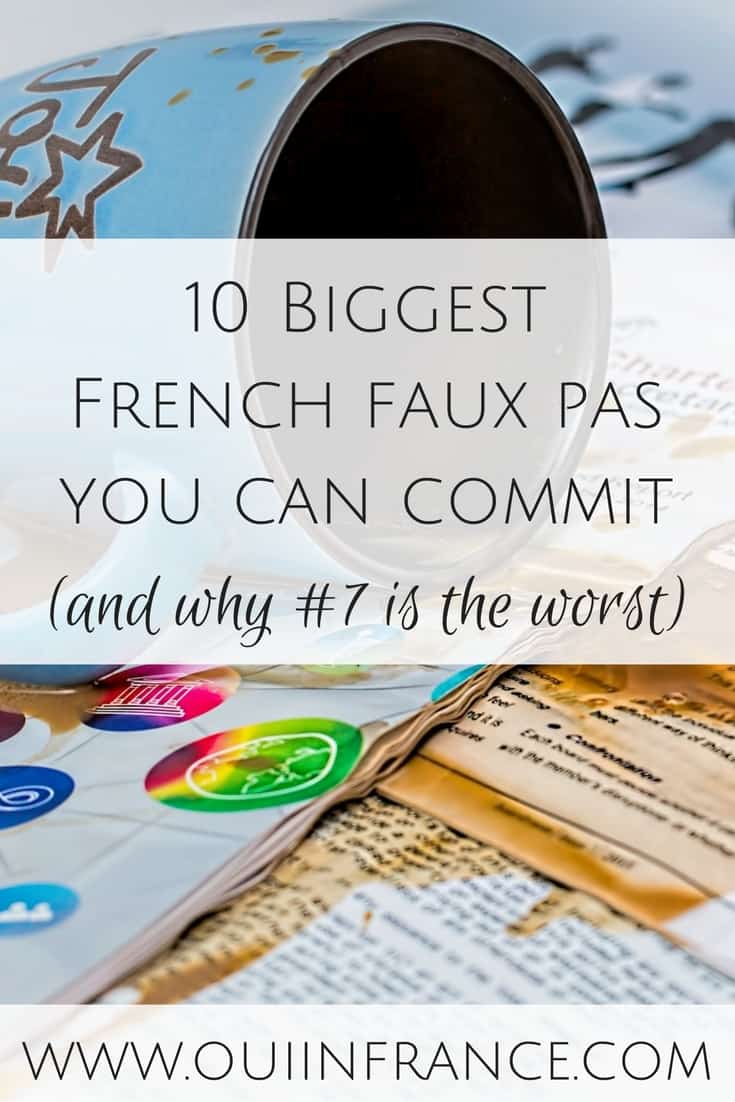 Ice in wine? Yes, if it’s a Rosé Piscine! This French cocktail is not a faux pas!

« The breathtaking Chateau de Noirieux: Hotel near Angers, France
Why I eat a ton of meat in France »