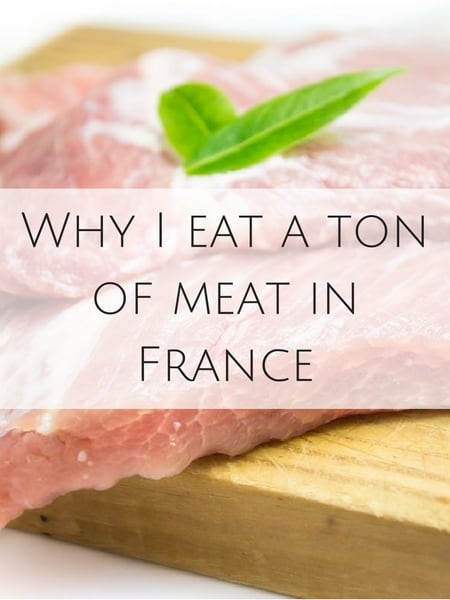 With all the wonderful gastronomic delights in France, eating meat is pretty much a must if you want to sample the best cuisine the country has to offer.  I’ve never been a vegetarian, but I’ve never been crazy about meat either. I’d have steak from time to time when my parents would cook it growing up, but it was never on my list of favorite foods and I’d never order it when out to eat. Fish, chicken and other options just seemed more appealing.

But then I moved to France and that has all changed. We had meat four times last week. Yes, it’s that good and I can say that steak has made it onto my Top 5 favorite dinners list. Is French meat really that different? Yah.

Read on for my take on meat in France!

Let me start off by explaining how I go through phases when it comes to food. I’ll like something a lot, get obsessed with it and eat it all the time and then get tired of it and stop eating it for a year or more. That’s how it was with Tasti D-Lite in college and I’ve cycled through this love/hate relationship with protein shakes, Lara bars, oatmeal, omelets. You name it, I’ve been obsessed with it. But with time, my interest wanes. Right now, my obsession is steak. 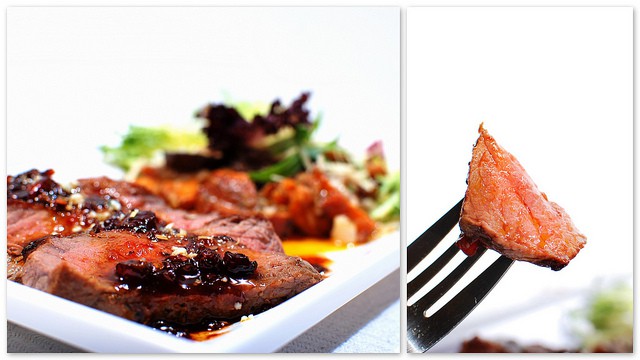 When you’re on a first-name basis with your butcher, I guess it means you really like meat.

You see, in France, it’s very normal to get your meat at the butcher. In just about every town, there’s at least one butcher who will chop up whatever you want, package up your high-quality meat and send you on your way. Yes, it’s a little more expensive than the grocery store but it’s worth it on days when you want something special.

Even our local grocery store’s butcher has phenomenal meat, we’ve discovered, and I just can’t stay away! There’s this one cut called the araignée (spider) and is not common in the U.S. Tender doesn’t even begin to describe this cut that’s near the tail/backbone. I’ve come to the conclusion that French meat just tastes better, and it’s not really a surprise since hormone-raised beef is banned here.

One part of the butcher experience that has surprised me is in the food handling department. I have raised an eyebrow over the meat handling norms in France but I’ve never gotten sick so I’ve just adapted. I once saw a butcher cleaning his rotisserie chicken machine outside with soap and a sponge and then come in and help customers without washing his hands in between.

And gloves? Never seen a butcher put on a pair of gloves before slapping and flinging hunks of meat around.

The hunks of meat are all just lying out and butchers will go from cutting your meat to ringing you up and handling your money at the register and then move on to the next customer.

Like I said, knock on wood, I’ve never gotten sick.

Culture shock moments at the grocery store in France >>

One time, I used the excuse of being American to be extra inquisitive about the meat practices in France to find out where the butcher gets it from exactly. Turns out, they have a family farm and he knows his cows. They’re all grass-fed and roam around the farm living what seems to be a really happy life. He even showed me pictures! So the extra cost doesn’t faze me because at least I’m supporting a humane business that truly cares about the animals’ well-being. They know every aspect of the farm, feeding practices, slaughter and journey to my plate.

But ethical concerns aside, again, French meat just tastes better in my opinion.

At this point, I’m two weeks into my meat obsession, so I’ll probably get sick of it soon enough. Although something tells me that my obsession with meat in France is here to stay… It really is too good to resist.

What do you think of French meat?

Do they eat horse meat in France?: Findus scandal

« 10 Biggest French faux pas you can commit. And why #7 is the worst.
The illusion of being busy »