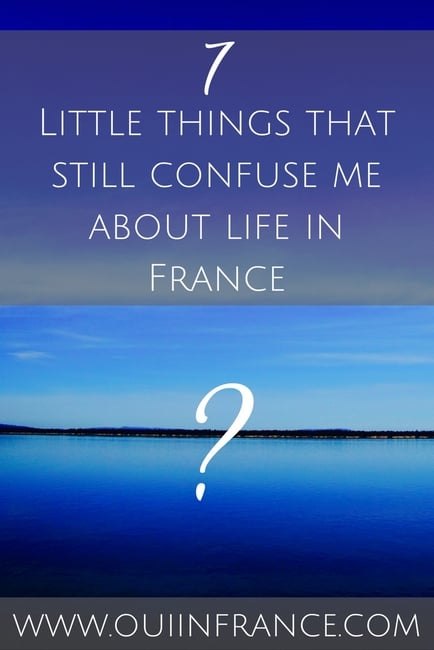 I used to consider myself an on-top-of-things kind of person. I was pretty confident with myself and my place in the world when I was living back in New York City. I had a good understanding of adult things and was a fast talker and fast walker. Nothing about life in New York was really confusing.

But then I moved to France and I felt like my adult self was tossed back to infancy in some ways because everyday things would get super complicated, not to mention I’ve majorly slowed down. Today, five years into this living abroad thing, I still find a few little things about life in France a tad confusing. And I’m only half ashamed to admit it.

Let’s talk about confusing things about life in France.

There are many aspects of life in France that make so much sense… like cheap wine and cheese and that whole work/life balance thing. And then there are other confusing French things that will leave you scratching your head.

But hey, if these little things are the main things I find confusing, I guess life isn’t half bad. 😉

As with a lot of what I write here, this post is entertainment based on my cultural observations. Don’t take me too seriously — I don’t!

These days, I consider my day to be a win when I get dressed in normal clothes (the beauty of working from home is you don’t have to actually put pants on!) and talk to someone face-to-face other than my husband and dog beyond bonjour. A successful day is when I manage to go a full 24 hours without embarrassing myself with some cultural faux pas or language mishap. 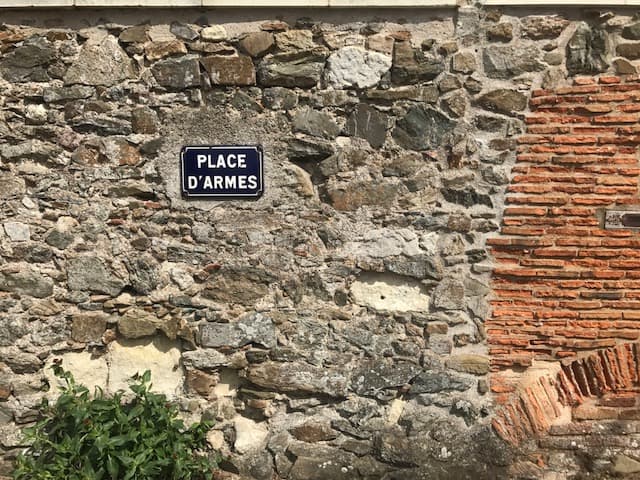 Sometimes these confusing things about life in France get in the way:

1. How to write an address

Writing a French mailing address is more or less the same as writing an address in the US. You put the name (see point #2 below) on the first line, then the street name on the second and then the postal code and city on the last line. But that’s where the similarities end. Some people put a comma in between the house number and “rue.” Is it 8 rue du Colonel LeBlanc or 8, rue du Colonel LeBlanc? I have no idea what the “right” way is and see it both ways. Maybe it’s an option. In any case, my letters always arrive at their destination so no big deal.

2. Capitalization and order when you write first and last names

This one might top my list of things that confuse me about life in France. It seems that the French like to put their last names first on things like checks, credit cards, letters and other official things. Sometimes the last name will be written in all capital letters and other times it won’t be. You’ll often see First name LAST NAME. Other times you’ll see LAST NAME First name. Sometimes, but rarely, you’ll see First name Last name like we’d write in the USA — and it’s all too confusing!

In the US, the only time you put your last name first is if someone is asking you to or you’re on a list alphabetized by last name. Otherwise, you’re First name Last Name. Or Mrs. Last name. I asked Tom why the last name is sometimes all capped (like we’re YELLING!), and he said so we can differentiate it from the first name.

Well, hey, guess what? It’s easy. We know the first name is first because that’s the traditional order of how you write your name. The first name comes first! Anyway, even French people do the capitalization thing differently. Depends on who you talk to.

OK, let me preface this by saying as long as you don’t greet someone with “bonsoir” at noon, you’re fine. Generally, bonjour is hello/good day and bonsoir is good night. Seems simple enough, right? Well, not so fast. Sometimes around 6 p.m. when it’s still light out, I’ll greet someone with a bonjour just to be greeted back with a bonsoir. It’s not a big deal, but sometimes I just want to get it right!

In my defense, even French people don’t always agree on the cutoff time and it varies. Sometimes I’ll walk into the gym at 6pm (dark already) and some people will say bonjour and others bonsoir. Not sure one is more correct. Like I said, just don’t say bonsoir at noon and you’ll be fine. The important part is that you’re greeting people and not just ignoring them.

4. Celsius (but this is only half confusing. At this point I know the basics)

0 degrees C is freezing (32 F). So anything negative Celsius is quite cold. 20 and up is comfortable and anything above 30 is hell. I know the basics. But if you ask me what 72F is, I’d guess and say… 22 C. Am I close? (damn, I just looked it up and I was right on! Maybe temperature conversions aren’t so confusing to me anymore.)

5. Insurance and what is reimbursed

Sometimes medications and doctors’ visits are reimbursed in full or close to it and sometimes they are not (if you seek out a specialist on your own without being referred by your GP, the reimbursement isn’t the same). Also, meds like birth control pills are not reimbursed. Sometimes your reimbursements are in full and other times it’s a small percentage of what you paid. Supplementary insurance (mutuelle) will often pick up the remainder, but it’s not always so cut and dry to figure out.

I just know that no doctor’s visit or medical procedure will zero out my bank account. The full cost of an MRI a couple of months back was 78 euros and I think the sécu plus my mutuelle covered all but 3 euros of it. I never know what will be reimbursed upfront beyond simple doctors’ visits.

I just got off the phone with someone who started off the call with, “Sorry to bother you.” She said this twice in a 1-min conversation (that could have easily been an email instead, but that’s another issue). TWICE! I kid you not. If I had been in the middle of something, I wouldn’t have answered an unknown number. It takes a lot more than a phone call to bother me. I know it’s just a nicety and something you say, but still, you’ll hear this “sorry to bother you” thing a lot — people even say it to employees who are working in a job where they are paid to help customers.

In my opinion, it comes across as over the top and is just something you say that you don’t really mean. The overall politeness can be its own topic on this list of things that confuse me about life in France, so read this post on politeness for more.

I’m embarrassed to admit that right now as I type this, I am not 100% sure what number to call on my phone in the case of a true emergency. Back in the US for any emergency, you’d call 911. Whether it was a police, medical, or fire emergency, the operator would be able to send you help. Some areas have specific numbers for different types of emergencies, but when in doubt, call 911 in the USA and your call will get routed appropriately.

Here there seem to be five different numbers depending on whether there’s a fire, car accident, criminal activity, etc. Talk about confusing things about life in France, right? I just can’t commit the French emergency numbers to memory, so I saved them to my phone instead. Just in case.

For the record, the number for emergencies in Europe is 112 (I’m going to forget that in about a day, I’m sure), but if you want the police it’s 17 in France. We found that out a few years back after seeing kids throwing rocks over an overpass and when we called 112, they told us to hang up and call the police emergency number. Yeah, I should tattoo all that on my hand.

Now there’s even a new non-emergency number for after-hours medical care (only in 3 regions at the moment).

So will 112 always get you routed appropriately in the case of an emergency? I hope so, but I really have no idea since when we called 112 that one time, they had us hang up and call someone else.

Here are all the emergency phone numbers in France:

Do any little things still confuse you where you live? What are some things that confuse you about life in France (or life abroad in general)? 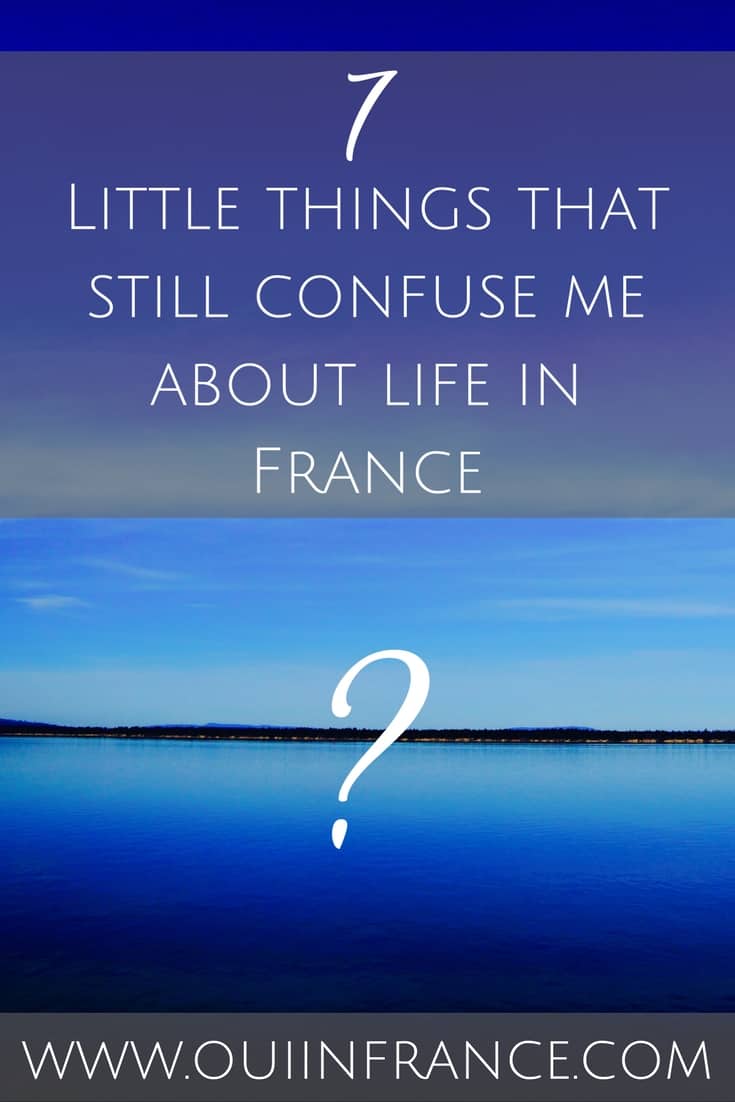 When does life abroad in France just become regular life?

« Synthol: Miracle French pharmacy product for bug bites
How to bring wine back from France »