Do mosquitoes feast on you when the weather gets warm? If so, we’re in the same boat.

Over the past couple of months or so, I’ve gotten some of the worst mosquito bites of my life. They swell up, get painful and red, the skin around them gets hard, and then they form a liquid blister that eventually breaks and crusts (the pics below aren’t even the worst ones). Oh, and they itch like mad. This never used to happen, though.

After a visit to the doctor last month and a 10-day course of antibiotics, I was left kind of hopeless as we head into the summer season. I already have a bug net for my bed, but what else could I do? Use Synthol on these bug bites in France, that’s what. This new-to-me product available at the French pharmacy is a miracle product for bug bites, so if you’re susceptible to all the creepy-crawlies, you’ll want to read on. Maybe it can help you. 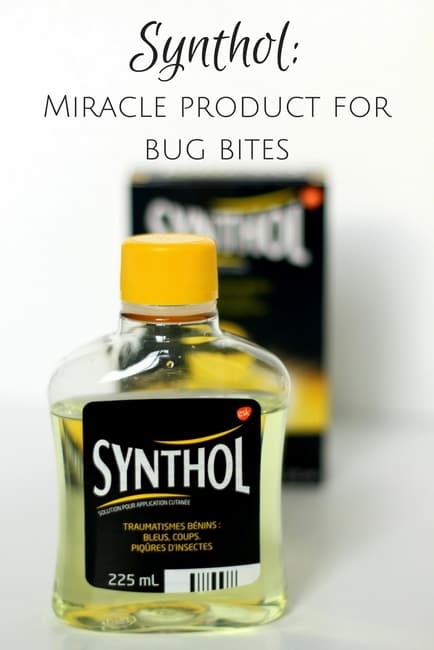 This season, I seem to have developed an allergy to mosquito bites. Instead of the normal welt and redness, it now goes way beyond that. I have gotten a bad bite every couple of weeks for the past two or so months now (and of course, Tom hasn’t gotten a single one). Regular mosquitoes and bug bites in Paris are annoying enough, but what I’ve been experiencing goes far beyond the realm of normal. 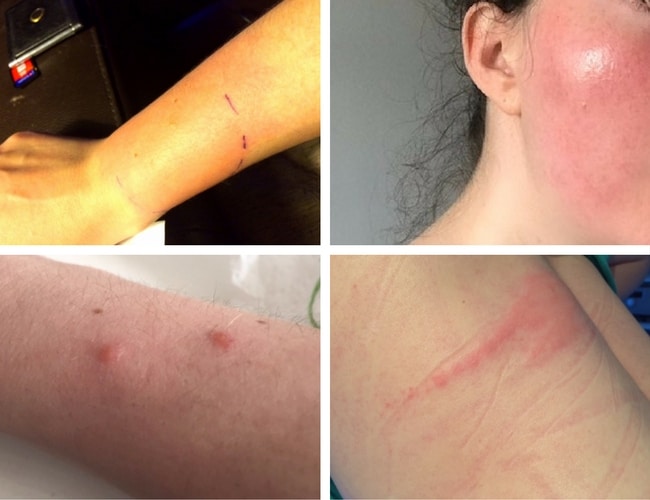 So why do the bugs like me? No idea. We don’t live far from a park that has a little stream running through it and it seems to be more humid where we are, so it’s possible the bugs just like to hang out here (although I rarely see them). The last straw was when I got two bites side by side on my arm and finally sought out the advice of a doctor who then prescribed me antibiotics to clear up the infection that had developed. Anti-itch creams just weren’t cutting it.

That was the second to last straw actually. The real last straw was a couple of days ago when two bugs bit the side of my face. It’s one thing to have a bad bite on a body part you could easily conceal (no walk in the park, but easier to handle) and another thing entirely to have to face the world with a face that turns people’s heads for all the wrong reasons.

Long story short, my cheek became swollen, red, hard to the touch, and super itchy from these mosquito bites in France. It looked like I had a bad sunburn on only one side of my face, or like I had gotten punched. I could feel it pulsing just sitting here at rest.

Differences between pharmacies in France and the USA >>

Insect bites France: Why such an extreme reaction?

Apparently there’s something called Skeeter Syndrome which basically means you react badly to insect bites, or more specifically to certain proteins in the mosquito saliva. This can come about at any time and for no particular reason, but it is common among people who live abroad and haven’t developed immunities to the bites of certain species of mosquitoes in their new home. Why this took 5 years to start happening is beyond me, but anyway.

I should really listen to my husband more often and not only when I’m desperate.

After the first couple of bites of the season, Tom said that I should put Synthol on them. Being unfamiliar with the product and overwhelmed by the bug bite situation and all the products in the pharmacy, I ignored him and kept cleaning it with a disinfectant, taking a Benadryl type of product, and putting on the hydrocortisone cream on it. I should have listened to him sooner!

I finally gave in and bought some Synthol for my bug bites in France because my face was still really bad. As someone with very sensitive skin, I was nervous to put a product on it that I wasn’t familiar with, but I’m so glad I sucked it up and just did it. Synthol immediately cooled my bites and didn’t irritate my skin. Today, I woke up with a 90% normal face. I can go out in public without makeup and no one will know that just 12 hours ago, I looked like a hot (literally) mess. 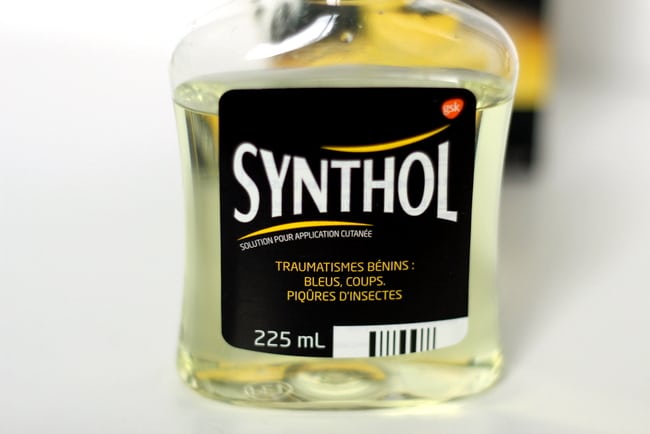 So what is Synthol?

It’s a light yellow analgesic liquid product created in 1925 that’s used to treat bruises, insect stings of all kinds and other trauma to the skin — like if you whack your leg on your desk walking by (never happened to me, just saying. ;-)). I think of it as a miracle product and use it predominantly for mosquito bites. The odor is medicinal but not off-putting. Back in the day, its formulation was a little different and was even used as a mouthwash.

The ingredients are (en français):

It’s not to be used on young kids under 7 years of age, those allergic to salicylic acid, etc. so read the packaging if you have any concerns.

How to apply Synthol

You generously wet a cotton round with the product and apply to the affected area for several minutes. I do this several times per day when I have a bad mosquito bite and find that it helps immediately. Even after just one application, it takes the swelling down by half overnight. It seems to dry up the bite and not just soothe it. Bye bye, dinky Benadryl anti-itch pen. Synthol is the real deal.

Where to buy Synthol

At your French pharmacy. The product was hard to find for two years up until last summer due to a rupture in stock at GlaxoSmithKline, but now it’s everywhere in France.

If you’re in the UK or other areas of Europe, these sites sell Synthol online:

Unfortunately, if you’re in the USA, I haven’t found a retailer that sells Synthol. Next time you’re in France, stock up!

About the mosquito situation

Summer means bugs and there’s no way to escape them, but I can take some precautions. The French don’t do window screens but I sure AF do. I’m duct taping screens to my window frames if I have to and have already set up my mosquito net that goes around our bed. I also bought a special spray for around the bed and windows and will be testing every anti-mosquito product the pharmacy has. Bugs, be warned, I’m coming for you!

Wishing you a bug-free summer. Stock up on some Synthol just in case! Ever tried it for bug bites in France? 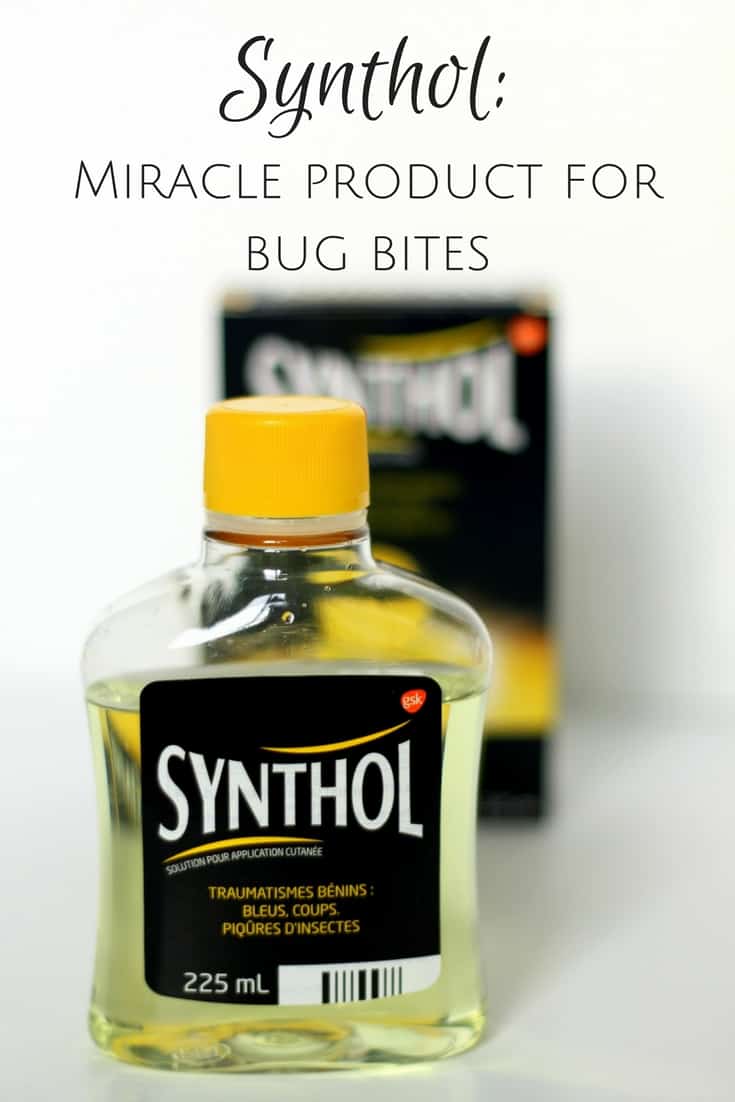 Disclosure: This post isn’t sponsored in any way. I happily buy my Synthol and wholeheartedly stand behind the product.

Invasion of the crazy-looking insects