This holiday season marks my 6th year of living in France and I’m reflecting on a question I received a little while ago from a reader. What has surprised me the most about my life in France? 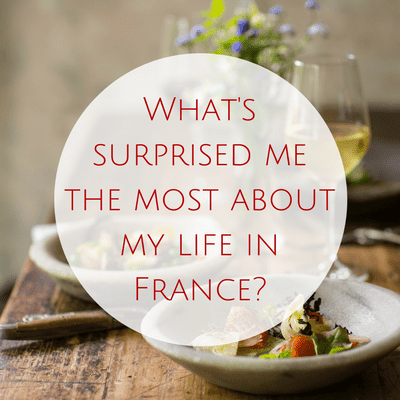 What’s surprised me the most about my life in France?

Sometimes things that surprise you sneak up little by little and it’s not until you look back that you realize what you now consider normal once wasn’t. Our lives change in ways big and small. Slowly and then more quickly. Life makes sense and then it doesn’t.

I think my first bits of French culture surprise started when I was a teen. I’d visited France several times over the years before moving more permanently at the very end of 2011. My first trip was as a bright-eyed and bushy-tailed high school student back in the late 90s.

And I hated France. People spat on us. It was the dead of summer and I was always covered in sweat (I hate heat). Everything felt foreign and nothing on that trip made me feel welcome. Traveling in a tour bus with a bunch of other teens isn’t the best way to see France either. I returned home majorly disappointed and tired with nothing pulling me back to France.

I think my perceptions of France and the French — and all the negative stereotypes — were kind of cemented after that trip to France as a teenager.

As an adult, I gave France another chance and visited Paris with a girlfriend of mine. We had a blast. It’s amazing what a difference 10 years and a change of traveling companion can make. A year later, I accepted a job teaching English in Paris and that was the first time I’d gone to France as a non-tourist. It was during that 7-month contract that I got to know Tom. The rest was history. 😉

Then the real surprises began. You know, the ones that are more impactful than the fleeting feelings of vacation culture shock. The ones that will dissipate once you’re back home where none of it matters. It’s interesting what you notice and what affects you once you realize you’re no longer just passing through. 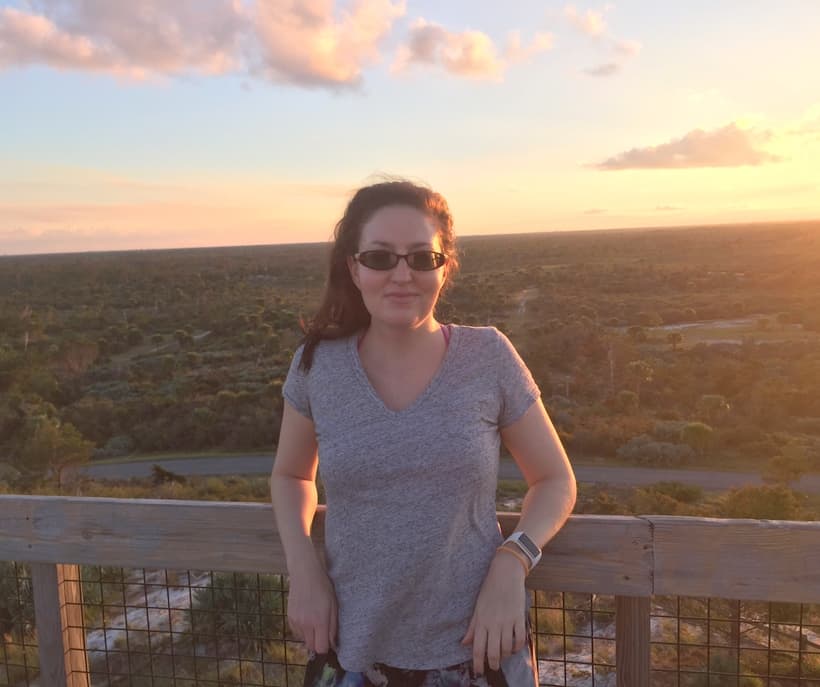 So what has surprised me about my life in France?

A bunch of surface-level things have shocked me the first couple of times — and have then become normal. Things like horse meat and rabbit meat with eyes still intact and cow tongue in the grocery store. Although surprising, little things like that don’t count for much beyond shock value in the moment. Those types of shocks ended after the first couple of years here.

On a deeper level, I’ve learned time and time again that people don’t fit into boxes. There are all different types of people from all walks of life in France who like doing all different types of things. Duh, right? Of course. But before you live somewhere, it’s easy to buy into the stereotypes that are formed after a vacation or two to a place.

I thought I knew France, or at least a piece of it, from my previous visits. But how little did I know.

There are all kinds of people everywhere and making assumptions about them will only steer us into uncomfortable territory.

Let’s take a French gym acquaintance of mine, for example. She is a hardcore fan of working out (love that!) and she doesn’t drink alcohol. Ever. She’d rather wear jeans and comfortable shoes over a dress and heels. She has a motorcycle — not a scooter — and always picks up after her dog. How’s that for dispelling myths about French women?

Which brings me to…

French people are not all fashionable and thin. The French are not all classy, upper middle class white people with perfectly behaved kids who shop at the farmers’ markets and cook fresh food every night.

It’s crazy to think that people actually believe that, but I think I did to an extent. Well, not that ALL French people are a certain way, but that generally speaking, certain things would ring true. Generalizations are helpful to a point but there are always outliers. I’m glad I’ve seen the light!

I’ve met all kinds of people that dispel stereotypes and I’m grateful for that.

The French aren’t superior to everyone else, nor do they act like it. There’s no reason to feel intimidated. 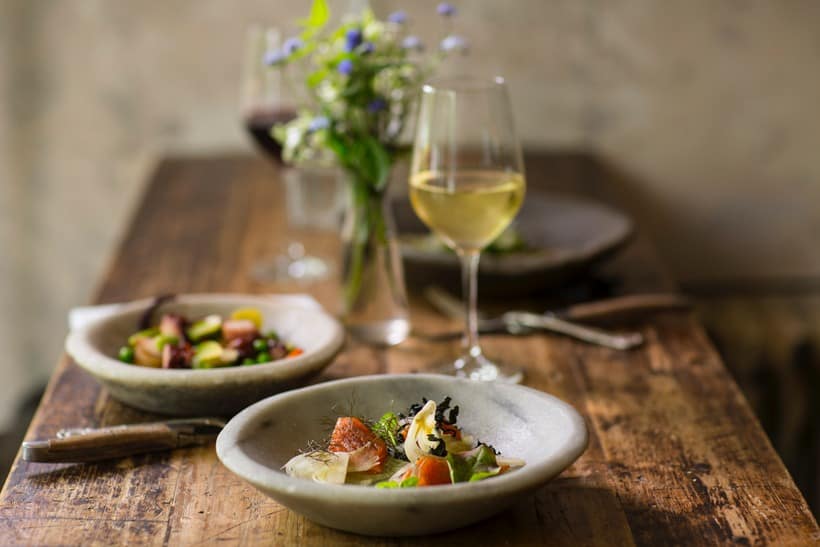 I’ve discovered that not all French food is fatty and rich. There are French specialties that might not be for the faint of heart but there’s also a focus on fresh, local food cooked simply. Grilled fish, sautéed veggies, some fresh bread and cheese are all you need.

Something else that has surprised me is how much people (who don’t live in France) romanticize life here. People have their own ideas based on the media, their experiences and perceptions. I think some people think that life in France is the same as a vacation and that’s just not the case.

I hear surprising comments via this blog and also from people back in the US who think I’m so lucky and my life here is like something out of a fairy tale. I assure you it’s not. 😉 I do all the routine things everyone else does like work, clean, deal with paperwork, walk the dog. Just in a foreign language and culture.

Maybe the most surprising to me of all is that even after 6 years of living and working in France, I don’t have much of a personal or professional network locally. 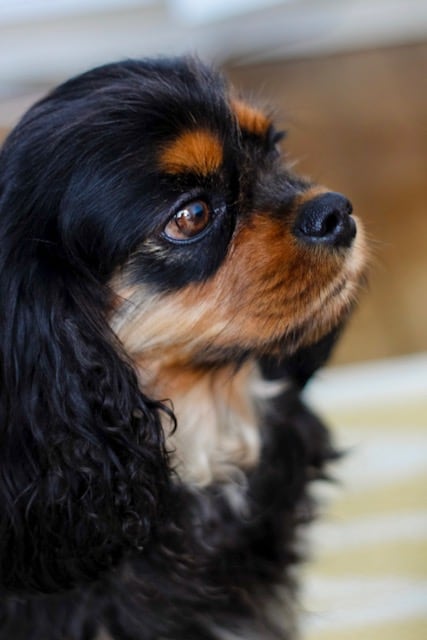 Tom is camera shy. Dagny is not.

I have Tom and Dagny. It’s my normal. But when I sit back and think about it, the lack of a network surprises me. And it’s not for a lack of trying, although I will admit I was more proactive about meeting people my first 2-3 years here. From meetup groups, to events in town, to even going to a Mormon church (I’m not religious at all), I put myself out there and nothing really came of it. It’s difficult to build a new social network. I think underestimated that.

Now I accept my situation and focus on the positives and staying in touch with the people I already have connected with. This was a shock to me because I’m not a loner at all but I’ve become one in a lot of ways. I have acquaintances I’m friendly with and people I know from the neighborhood… but real friends in my area? Nope.

I’m the first to admit this isn’t France’s problem or something I’ll blame on the French.

It’s just my reality of moving from a big city to a small town in a foreign country as an adult. An easily discouraged adult, in some ways. But one who owns her decision 100%. I love hearing about people with wonderful neighbors and colleagues and French friends because at least I know it exists. That’s just not my experience, but luckily, my experience isn’t the only one you can have.

Maybe 2018 will be my year of meeting people locally. The good still outweighs the bad. Until that changes, France will be my home. 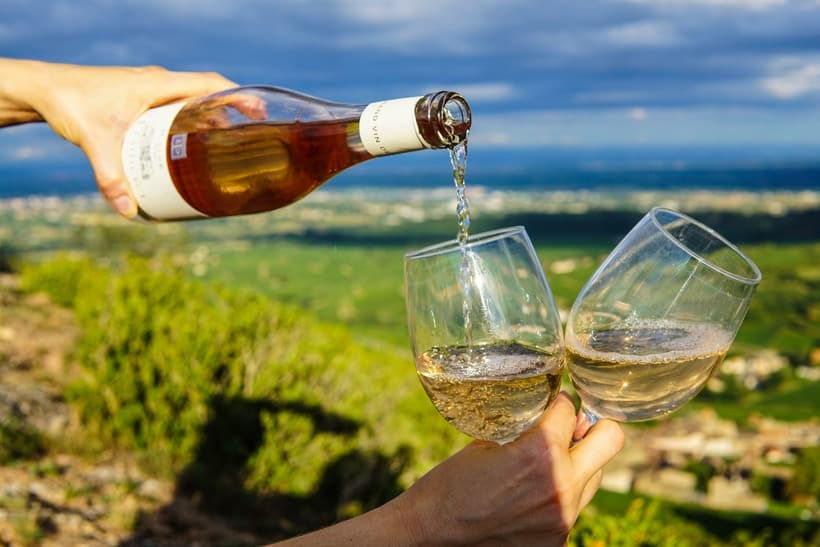 I’m surprised by how many wonderful wineries there are locally. I can drive an hour or less in several directions and be face to face with some of the most generous, knowledgeable wine producers who clearly love what they do. With affordable wines!

Back in the US, I drank wine but reserved it for special occasions for the most part. It was expensive and I never found any wine that I truly loved. It wasn’t until I moved to France that I learned to appreciate the French culture of wine and discover varietals beyond my comfort zone. Living in a wine-producing region has helped me learn so much about wine from the very people who produce it. I’ll never take that for granted. I even have a few Loire Valley favorites.

Finally, it’s surprised me that it’s been 6 years already. Time passes so quickly and I just want to hold on. I’m amazed by my resilience and ability to adapt despite the bumps along the way that always seem to pop up at all the wrong times. I don’t think life would have pushed me as much as it has in the comfort of my own language and culture back in NYC. I’m incredibly grateful for the challenge, even though I’ve had my moments of weakness.

The challenges of life abroad always remind me that I’m human and doing the best I can. I notice things. I slow down. I say sorry. I try again.

Through it all, I’m still here living life and learning along the way. I might even smile and appreciate the view.

What about you? What living in France surprises have you experienced? 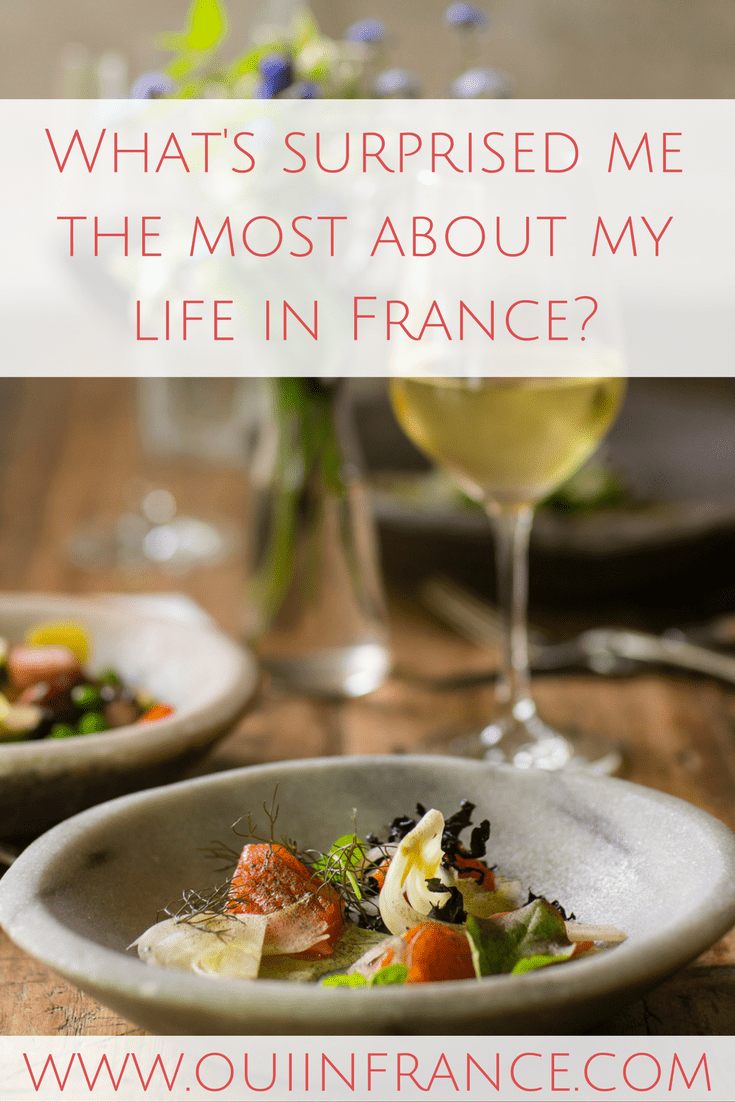 When does life abroad in France just become regular life?

Expat depression: Dark side of life in France (and where to turn for help)

What has surprised me the most?