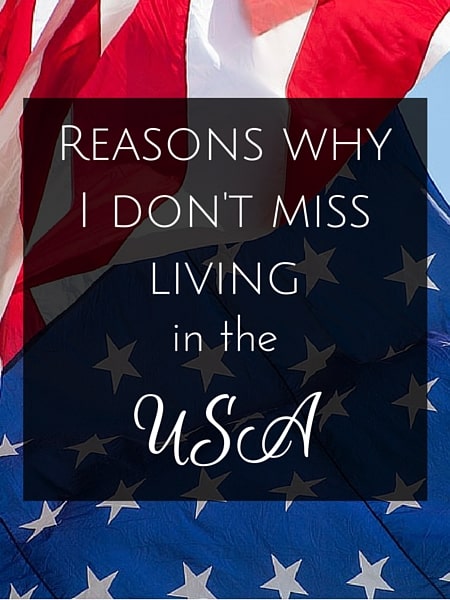 This isn’t a post about why it’s better to live in France. No place is perfect. Or even close to perfect. You could come up with a sizeable list of pros and cons of pretty much anywhere in the world ranging from superficial likes and dislikes to deep cultural notions and attitudes ingrained in the culture. This isn’t a USA bashing post either. I’ll always love the USA and life there can be fabulous. I may even return one day. Life in France can be fabulous too and at the same time tedious and frustrating. But something I say often is that actually living in France is nothing like a vacation in France. That said, I’ve been in France for 4.5 years now and there are definitely a few reasons why I do NOT miss living in the USA.

Reasons why I DON’T miss living in the USA

The lovely Lisa who blogs over at LisaLDN was my inspiration for this piece, so I decided to share my take. Keep in mind the following list is just my perspective. Not everyone has to agree! I’d love to hear your thoughts in the comments.

As a single woman back in the US, I paid about US$300/month out of pocket for crappy healthcare coverage when it wasn’t covered by my employer. Then on top of that there were copays and deductibles and enough to make your head spin. Beside being expensive and anxiety inducing, US health insurance coverage can be extremely confusing.

What bothers me the most is that in the US, healthcare is a privilege and not a right. It’s something you pay for in most cases and often tied to you or a family member’s employer. So if you’re laid off or fired, your insurance gets cut off as well. France’s healthcare system is nowhere near perfect but it has a lot going for it. Your health won’t bankrupt you, for one, and because we all pay into it, healthcare is available for all citizens and legal residents even if you lose your job. I wrote a whole post on myths about the French healthcare system you should stop believing if you’re interested in learning more.

Major American cities have fantastic transportation but if you’re in a smaller town, the bus network is either non-existent or in need of a schedule makeover. America is big and people have cars to get around, but in Europe? Even in smaller cities, there are often train stations, buses and sometimes even trams that make getting around simple. This is great if you don’t want to rely on a car. Highspeed trains are fantastic alternatives to flying and can get you all over France and Europe in a snap. 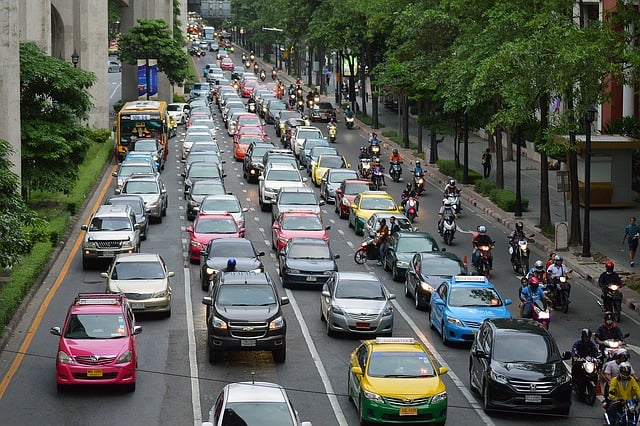 Working in NYC meant that if I was driving and wanted to avoid rush hour traffic, I had to arrive/leave from work either super early or super late. Otherwise, a simple 40-minute commute could take hours. In France, there’s rush hour traffic but not where I live. That’s one part of my old life that I traded in. And of course there are more rural areas in the US where you’ll be the only car on the road just like there are larger cities in France where traffic is consistently the stuff of nightmares. It’s just not something I have to deal with anymore.

Americans work hard, have little vacation time, and people are always busy. In fact, The New Republic just published a piece on how exhaustion has become a status symbol. We rush around, we put in overtime and we multitask like pros. That was my life. Work is often a hot topic of conversation.

In France, people work but they also take time to fully unwind because the work mentality is completely different. With 5 weeks of paid vacation minimum, French workers can unplug and unwind. Sometimes for three weeks in a row or the entire month of August! Work is less of a focus in life and doesn’t define them. A balanced approach to work makes a lot of sense and maybe it took me moving to France to see firsthand how other people live. Society still functions if employees aren’t worked to the bone and instead peace out for several weeks each summer!

The temptation to consume

This is one of the main reasons why I don’t miss living in the USA. But it goes both ways. As much as I love the fact that stores stay open late in the USA and you can get whatever you need pretty much whenever you need it, there’s a flip side. If you always have a variety of stores/restaurants/fitness studios/activities available and waiting for your business, you’re more likely to spend money when you have options everywhere. It’s so easy to stroll into Starbucks and spend $4 on a beverage you could have skipped or step out for froyo at 10pm after dinner when some fruit you had at home would have been fine or spend money on stuff at Target because it’s open until midnight and you happened to pass it on your way home. Or to spend Sunday afternoon shopping at the mall. The list goes on…

Many of France’s stores aren’t open at all on Sunday, you can’t eat outside of mealtimes at restaurants in smaller towns and there just isn’t as much blatant consumerism everywhere. Luckily for my wallet, I don’t live anywhere near a Starbucks or a “real” mall. And this deal shopper rarely buys clothes or shoes in France because sales are few and far between. I really do miss a lot of aspects of life in the USA, so as I said I go back and forth on this one, but I know that for my current situation spending less is a good thing!

Gun control is a topic that gets heated very quickly so I’m not going to get carried away here. Between racially fueled shootings, school shootings, accidental deaths of children and more, I think it’s safe to say the USA has a problem with guns. Or irresponsible people. Maybe you disagree and I respect that. I think there are ways that we can honor Second Amendment rights and still make the country a safer place in which to live. As I said, no place is perfect but the fact that France has fewer guns out on the street makes me feel safer. Is it safer? Maybe not. Really who the heck knows anymore.

5 Reasons why you should go on a European cruise

« Do French women shave? Myth or fact?
Getting over your fear of speaking in a foreign language (and why you just have to do it) »