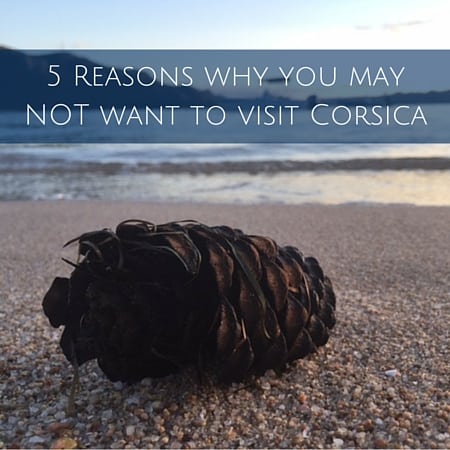 Corsica was one of the best vacations of my life and I still can’t get it out of my head over a month later! If you have the chance to go, by all means GO! I feel that any type of traveler would enjoy the island. But….. here are 5 reasons why you may NOT want to visit Corsica.

I wouldn’t let any single reason below deter you from visiting Corsica on its own, but if several of these reasons ring true for you, maybe reconsider making the trip.

So here we go…

If you are a nervous driver. Or get car sick.

The roads in Corsica tend to be windier and narrower than what you may be used to back home. Sometimes passing cars are close enough to touch and you have to be pretty alert and even aggressive at times. Many roads up in the mountains are without guard rails, street lights and lane markings. Some are even just narrow dirt roads. So if you aren’t really confident when driving to begin with, Corsica might bring on a panic attack. In general, the main roads are nicely paved with dividers, areas to pull over and are well maintained. Also, if you tend to get car sick, you may not cover much ground in Corsica because to get from anywhere outside major cities, you have to take windy roads. Even if you normally don’t get nauseous in cars as the passenger, you may feel a little queasy after 30 minutes of Corsica roads (even if you drive gently). It would be a shame to stay put and not discover all the island has to offer.

If you only have a few days to spend in Corsica.

Corsica is an island but it doesn’t feel small. There’s no shortage of things to see and do. If you only have a couple of days here, you may want to go somewhere else and book a trip when you have at least a week to devote to the island. We were here a week and a half and covered Porto Vecchio, Sartene, Bonifacio and the mountains in between in that time. If you only come for a long weekend, you will leave wanting more — which maybe isn’t a bad thing. If you’re nearby in France or another part of Europe, maybe a weekend getaway would make sense but it may not be worth the trip if you’re coming from the USA. If you have a good week or two to spend in Corsica, do it!

11 Things that surprised me on our Corsica vacation >>

If you have no knowledge of the French language.

Corsica is part of France but when compared with mainland France tourist destinations, Corsica comes up short in the English department. Let me say that by no means do I expect people in other countries to speak English. But I have become accustomed to it. Many people who work in tourism around the world have at least basic knowledge of common English phrases — but as a whole, that’s not the case here. If you have no working knowledge of French, you may become frustrated because many waiters, shopkeepers and tour companies didn’t even speak broken English. It depends on your comfort level with language barriers. If you get flustered or annoyed, take that into consideration.

Luckily Tom is French and I speak French so our group of 6 didn’t have any issues, but if you only know a few words of French and are easily frustrated by language misunderstandings, you may want to go somewhere else. My brother went to a cafe to grab a coffee and wanted to know if he could get it to go. Not knowing French (and the fact that coffee in a paper cup to go isn’t common, he did his best to gesture and make himself understood but the woman just pointed him to the ice cream, unsure of what he was asking. 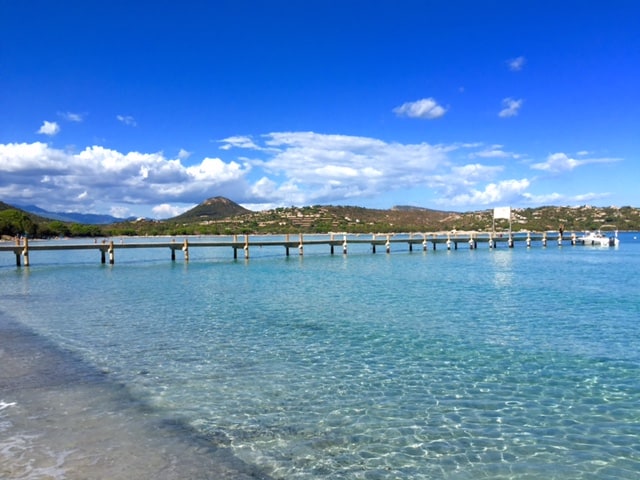 If you just want beach and pool.

Many people on vacation just want to let loose and relax by the beach or pool all day. I’ve gone on vacations like that in the Caribbean and they were great. But after two days of the beach, I want to do something else — maybe that’s just me. Luckily, Corsica has so much to offer. If you just want a break from work to chill out and relax, don’t come to Corsica because you’d be cheating yourself. You can hike, go offroading, camping, horseback ride, discover the culture and gastronomy of the region, tour wineries in addition to lounging on the beach. It would be like visiting NYC for the first time and staying in your hotel the whole time. Save the cash and go somewhere closer to home if you just want beach and pool. You can do that anywhere!

Corsica is honestly one of the best vacation destinations I’ve ever been to. It’s a “real” place in that not everything is catered to tourists and you see schools and workers just living their daily lives in between your tourist activities. Corsica is a vacation destination that you can feel comfortable about and not worry about safety if you go driving at night. Corsica would be a fabulous choice for an active family vacation, honeymoon, anniversary or even a solo trip. You’ll enjoy it so much that you won’t want to leave. Is that a reason to not come at all? Of course not! It’s a reason to return!

Ever been to Corsica? Have anything to add?

5 Reasons why you should go on a European cruise