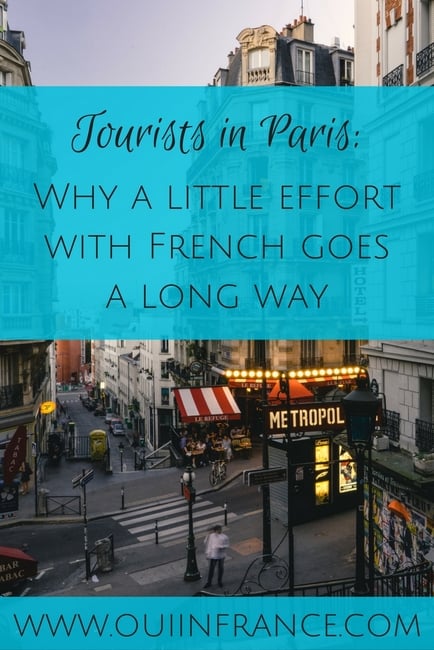 While standing in line at a Paris Ladurée over the weekend, I observed one tourist after another launch right into English when addressing the employees of the famed macaron shop. I’d hear a variation of, “Hi, I’d like a box of six macarons” over and over until I questioned if I had suddenly been transported to the Ladurée on New York’s Upper East Side.

Nope, I was still in Paris and not one tourist started out with a friendly bonjour or a tentative, “Parlez-vous anglais?” And yes, this is a problem. 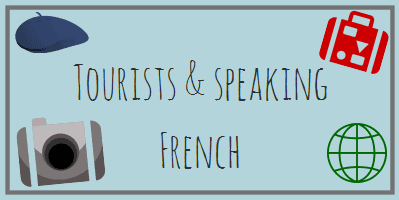 In France, the native language is French in case you haven’t noticed, and I get that most tourists visiting here don’t speak French and may never set foot in the country again.

But we all are capable of learning a few simple words and phrases in French.

I’d bet that 99% of the tourists visiting (or people anywhere) know that bonjour means hello. So why start off an interaction in English when you know you’re in France? It’s not like the country’s native language is super rare and secret and only spoken by 1,000 people on the planet. French is pretty mainstream and just about everyone is capable of learning a few words and phrases.

Who cares if you mess up or have a terrible accent? No one at all. At least you tried.

By attempting a few words like bonjour or merci and a “Parlez-vous anglais?”, you’re showing you understand what being courteous means. You’re acknowledging the fact that you’ve left the USA and are now in a country that speaks French — a place where you shouldn’t assume you’ll be catered to at all times.

It’s a simple courtesy to start an exchange with someone in their native language, and here, you do that with a bonjour.

By not even attempting a bonjour is just plain rude and makes me feel embarrassed for my fellow countrymen (and tourists say the French are rude?).

Imagine someone stopping you on the street in your home country and confidently addressing you in their native language. They’d be met with blank stares. Or laughs.

The difference is that unlike in France where many people do know a little English, the majority of Americans won’t speak the tourist’s native tongue. So for tourists in the U.S., communicating in English is a necessity for getting the point across. So what do they do? They try. With their accent and mistakes and sign language.

English-speaking tourists have it too easy when traveling abroad.

What’s the big deal, you say?

Yes, of course the employees in the top tourist areas speak at least enough English to facilitate their job duties (and may switch over to English after you muster up the courage to say bonjour, and be gracious when they do!), but that’s not the point.

No one is expecting tourists to speak conversational French or anything close. But making an effort to say a word or two goes a long way in showing you’re respectful and self-aware enough to know that starting off an exchange in English sets you up for a downward spiral into Ugly American territory.

So by all means enjoy your trip but keep in mind the French take pride in their language, so be respectful by trying out a few words. Learn ’em before you even get off the plane. And do the same thing when you visit any country whose native language isn’t English.

You’ll get a few smiles and might even make a new friend along the way.

Do you try to use a few words in the native language when you travel? 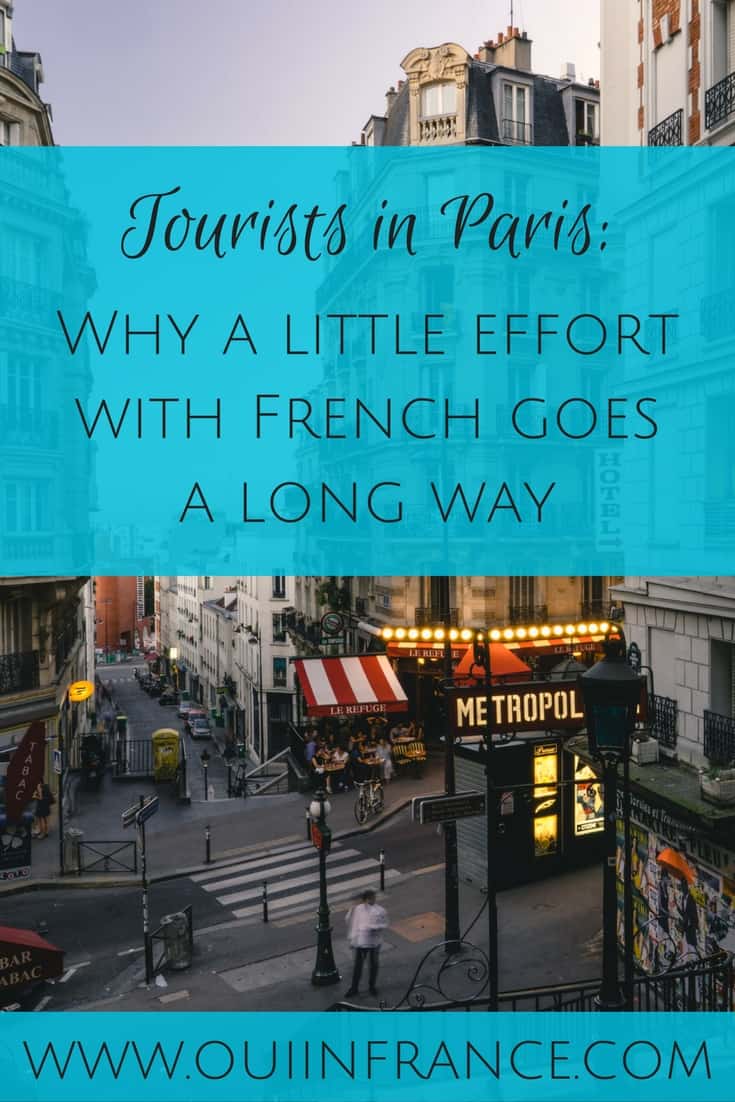