When speaking a foreign language, how do you approach the pronunciation of words in your native language? Or the opposite situation… when you’re speaking your native language and foreign words come up. Do you pronounce them like a native speaker would (if you’re able) or do you say them the way they’re pronounced in the language you’re speaking? Let me give you some examples and how a simple pronunciation choice can impact communication.

Note: For purposes of this post, I’m using French and English as my example languages. French is my second language and English is my native language, but please note that what I’m writing about could apply to any language. 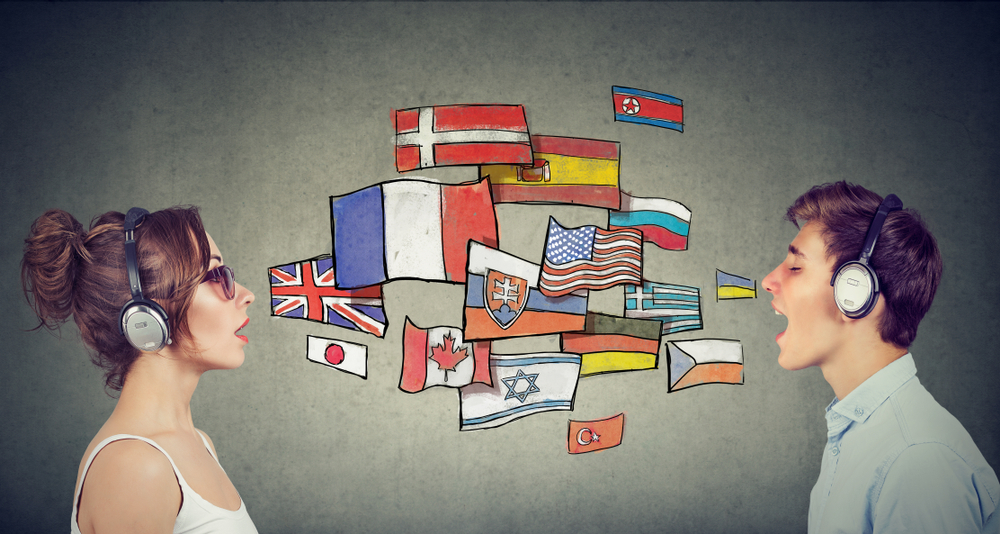 Do you pronounce it the way English speakers pronounce it or do you say it with your best attempt of a French accent? I’m talking about words like croissant, carte blanche, Paris, cul de sac, hors d’oeuvres, macaron, Notre Dame…

Are there variables that influence your pronunciation choices? Let’s talk about that. Maybe sometimes you pronounce the words like English speakers do, and other times, you say them in French.

This accent switching is most definitely a “thing” and I’ve discussed it at length with some of my friends who live abroad in non-English speaking countries.

I’ve had instances where I’ve been speaking English to people who only speak English, and when I’ve come across a French word and pronounce it like a French person would (out of habit), people mock my accent because I didn’t say it the English way.

When I’ve pronounced the words like an English speaker, they’ve asked why I don’t say it in French. Or what I find really funny is that they think I can’t say it in French, which is crazy. I got a comment on my YouTube video about making croissants and someone literally commented about how shameful it is that I can’t say croissant properly in my intro, which I pronounced in English. Well, it’s BECAUSE I’M SPEAKING ENGLISH, that’s why I said it the English way. 😉 And that’s not the only reason.

Anyway, there are a lot of factors that play into the way someone pronounces a word, so let me break it down.

This is the same in French. Most native French speakers, upon coming across an English word or place, pronounce them with a French accent when speaking French. So Miami isn’t My-am-ee like we say in English, it’s Mee-am-ee. My name, Diane, has been pronounced Dee-anne since 2012 in France. I’m not Diane here. The Di part is pronounced Dee.

It’s only normal… and can sometimes even be problematic.

When I first came to France to teach English, I would always ask my students to write down what they were saying if I came across a difficult word. For the life of me, I couldn’t understand what place they were asking me about. Hollywood sounded more like oly-vood and Detroit as day-twahhh. At that time, my ear was not used to how the French pronounced common places in the USA. Of course they didn’t pronounce Miami or Detroit like I would — they couldn’t say the words like a native speaker even if they tried — and it took a while to get my ears in gear.

Another more recent example was at the gym while waiting for a BODYCOMBAT class to start. Keep in mind no one speaks English to me in everyday life. All conversations are always in French. So anyway, I was speaking to a fellow gym-goer after not being at this particular class for a while due to work travel and the instructor comes over to say hi. He asks me a question that I had to ask him to repeat twice. I kept missing a crucial word in this simple convo. Even with context, I wasn’t getting it and there was an audience of other gym-goers within earshot since we were all waiting in the same area. I felt like such a clueless idiot who had put herself on display.

So then, noticing I wasn’t getting it, the instructor switched up his phrasing and I understood right away. He asked me, “Diane, tu-as fait une pause ?” I haven’t seen you recently, he explained. Ahhhh, yes. I haven’t been here in a couple of weeks. Right. I took a break, a pause from class. Got it. Phew. The conversation was then over.

The man I had originally been talking to leans over and makes a joke about my English getting rusty and I looked at him with a confused expression. He explained that the question I wasn’t understanding was “tu-as fait un break ?” but with the French pronunciation of the English word “break” (more like breck), I had no idea what the instructor was asking me. The shame, man…

If he had said break like a native speaker pronounces it, of course I would have gotten it on the first try. Total face-palm moment. I didn’t expect the English word to be thrown in and am not used to hearing it with a French accent, but now I know better. See? I’m always learning.

These days, when I don’t understand something in a casual conversation, it’s probably because the person is saying something in English. I really need to check myself and perk up my ears. This English flair leads to my ears not picking up the English word with the accent. I felt so silly after that interaction above.

And it’s happened a couple of times — a French person using an English word that I’m just not understanding with the French pronunciation. But it’s proof that sometimes the pronunciation of the foreign word can majorly affect comprehension! P.S. For the record, English words in French (especially among people under 30) is pretty common and he wasn’t doing it to be fancy since he knows I’m a native English speaker. 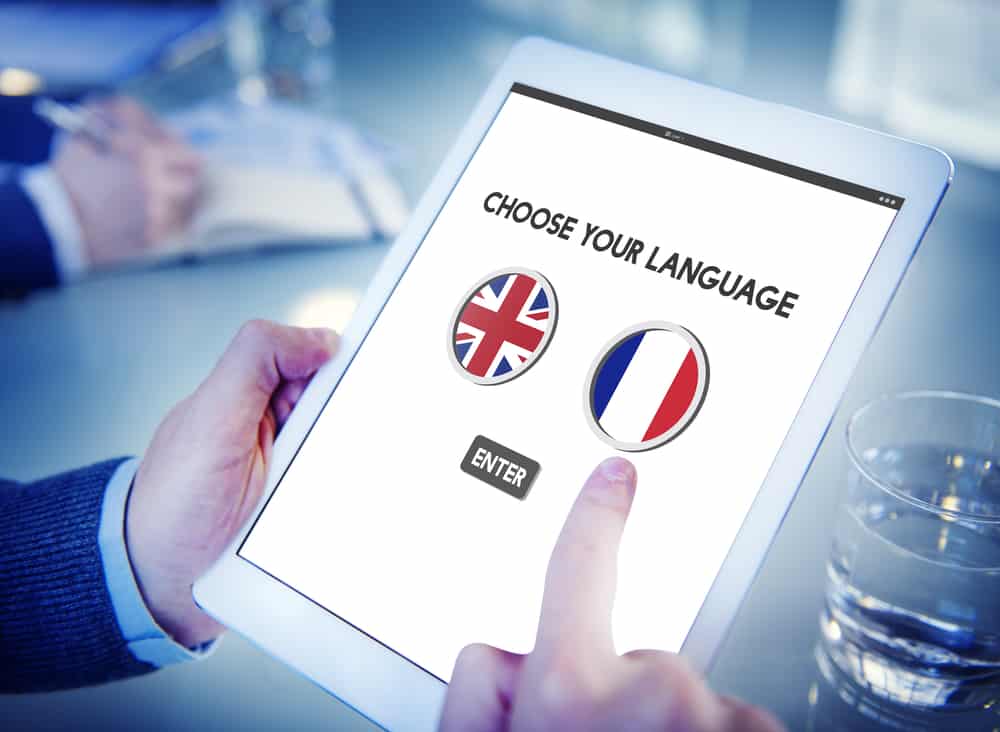 Now let’s turn to why we say foreign words the way we do in our native language and when speaking another language. There are a bunch of questions to take into account.

Factors that play into our pronunciation choices:

Is English your native language? If so, we’re more likely to pronounce foreign words in English, or with an English accent since that’s how we’ve been used to hearing them and don’t always know any other way to say them. But there are always exceptions.

Who are you speaking with? Is it a one-on-one conversation or are you speaking to a group? Is it a native speakers of the language you’re speaking or the word you’re using in the other language? Does this person know the other language and speak it with some degree of competency? Are they likely to understand you? These are all points to consider. You have to know your audience.

What’s your goal with the pronunciation? Language is meant to be understood, so if your pronunciation is going to throw someone else off, for whatever reason, do your best to be understood. That might mean pronouncing a French word the French way with a French speaker (if you’re able) and maybe stick to English with an English speaker.

Tom (my French husband if you’re new here) has actually not understood the English pronunciation of some French words the first time he heard them on TV shows. When shows have said carte blanche or some other French word, Tom didn’t even pick it up, so it goes both ways. Now he gets understands from being exposed to more English pronunciations of French words, juts like I now understand when French people say Detroit and Hollywood. They aren’t saying it their way to be funny — that’s how the words are pronounced when speaking that language.

Let’s talk about people’s names. In English, I personally try to pronounce first names the way the person introduces themselves and repeat their name to the best of my ability. Which is funny because my name is Diane, but in France as I mentioned, I’m “Dee-anne.” I don’t even try to correct people. In French, the “i” is an “eee” sound so when they see the name Diane, it’s Dee-anne. Most people can’t say Diane properly in English, so I just went with it.

I think you run into 2 problems when you pronounce a French word with a French accent while speaking English.

The first one there is HUGE. When I slip and say French words the French way in English, I end up feeling embarrassed because people think I’m trying to show off or be fancy. Or one-up them with my linguistic baddassery. Ha. In my case, it’s none of that but it can come across like you’re some kind of snob! People don’t know where the accent came from. And number 2, well yah that’s a huge issue if the person isn’t going to understand!

This video illustrates how ridiculous it can sound when you language-switch mid-sentence:

Imagine a native English speaker saying the French words with French pronunciation from my examples above in regular conversation and how the reaction might differ between the following people:

1. To another native English speaker who doesn’t speak French.

2. To a native French speaker.

3. To a person who speaks French.

Depending on the word, #1 might not even understand the word being pronounced the French way. #2 and #3 would understand but might find the pronunciation choice bizarre or even pretentious or showy. 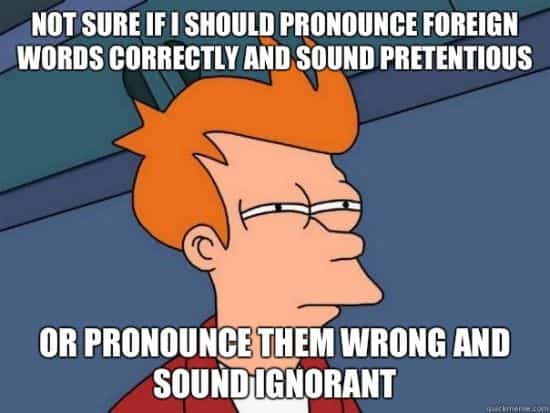 So in the case of being able to speak both languages, consider the following:

Is your choice of pronunciation going to help or hinder comprehension? In the example above of my French students pronouncing American place names with a French accent (because they didn’t know the native pronunciation), that wasn’t a choice. It was the only way they knew how to say the word. When I tell French people that my family lives near Miami, I say it the French way so I’m clear. It’s Mee-am-ee and not My-am-ee.

Just like many English speakers can only pronounce words like hors d’oeuvres or cul-de-sac with an English accent because they don’t speak French. And that’s more than fine. These are words we use in English so there’s no need to try to be fancy.

I’m not going to bust out French pronunciation just for fun when speaking English and I’m not going to pronounce words in English with American pronunciation when speaking French. The exceptions would be if it would affect comprehension, if I didn’t know how to say the word properly, or for learning purposes if someone specifically asks me how to say something with a particular accent.

What about you? How do you pronounce foreign words in English? And English words when speaking a foreign language? 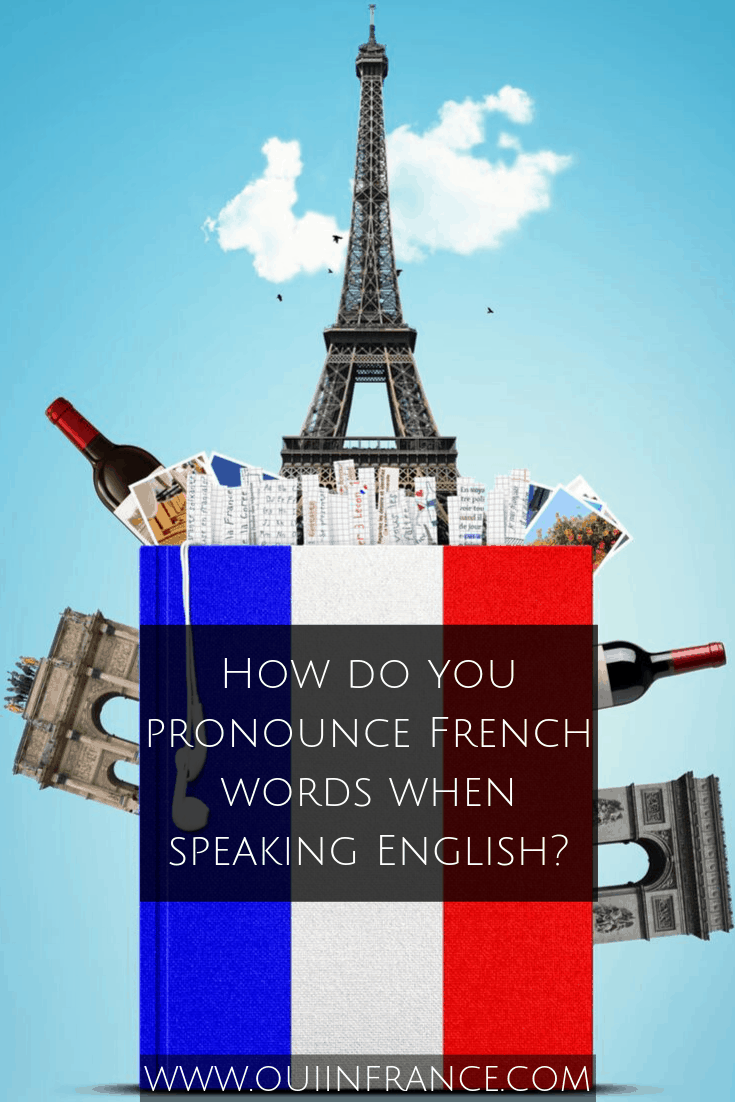 Need a French/English language speaking partner? Let’s help each other out French accent in English: They sound great unless you say one of these words