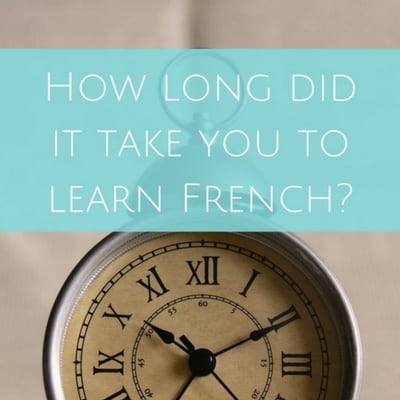 For those of us who have studied a foreign language, one of the most difficult questions to answer is, “How long does it take to learn French?” The person innocently asking means no harm, but this is a complicated question to answer. Let’s talk about why.

How long does it take to learn French?

(Note: This post applies to any language. I often refer to French in posts since it’s my 2nd language and I live in France, but what I’m talking about here is by no means specific to the French language.)

These questions all make me take a deep breath before answering:

Most of the time when I’ve gotten this question, the person asking has never seriously studied a foreign language. People who have would know how problematic this question is.

The lovely Jasmine of Questa Dolce Vita wrote about this and says, “…These questions are highly annoying to answer because they are not formulated correctly and in my opinion, we should stop asking them in this way.”

Asking “how long does it take to learn French” to learn a language assumes that language learning has an end date and that the learning phase is over.

Questions like those imply that language learning works like this: You decide you want to learn a language, then you take all the necessary steps to learn it, and then boom, at some somewhat soon milestone in the future, you’re done. Learning is finished and you speak the language fluently.

Except it doesn’t work like that. Not for me and probably not for you!

There’s always more to know. If you think you’re done learning, you’re probably not as advanced as you think you are. Not to mention the fact that French culture is so intertwined with the language, that learning the language alone without focusing on culture is only half the battle. (Check out this post on les aoûtiens for an example of what I mean.)

'How long did it take to learn French' is a problematic question. Here's why language learning has no end date. Click To Tweet

Let’s talk about the “are you fluent yet?” question.

Jasmine talks about everything that’s wrong with this question and I’m quoting her here because what she wrote mirrors my exact thoughts. The asker probably means no harm and is genuinely curious, but it’s just not a question you should be asking anyone.

“The use of “yet” implies that at some point, you’re expected to be fluent. Not the case. Why are we putting this fluency expectation on expats? But second of all, what is fluency? … Is fluency being able to live in a country with ease and make local friends or could it be giving a presentation about rocket science physics? Is it speaking in stops and starts but with perfect grammar or is it speaking fluidly with mistakes?

And besides that, I think we also have to ask ourselves…is fluency a requirement to live abroad? Is it so-called “inevitable” that a person will naturally “pick it up” after X years in X country?  Because when you ask someone “are you fluent yet?”, you are essentially forcing all those implications on the person you’re asking.”

Do you speak French?

A few months ago while at a mussel sanctuary in the Charente-Maritime, the French tour guide asked us if we spoke French before kicking off our tour. For Tom, the answer was a clear yes, since he’s a native speaker. I also said yes.

For the tour guide, the answer could only fall into two categories. Two absolutes. Black or white. Yes or no. You either speak French or you don’t. Simple, right? No.

For me, 80% of the time, the answer is a shade of gray of varying pigmentation.

Do I know every single mussel biology word she’d be using during our tour? Nope. But I could pick it up from context, most likely forgetting it by the time I’d left the building. Would a native speaker even know all of these terms? Maybe not. But for the people giving the presentation in French (and not able to speak another language), for them, the question was as simple as, “Do you speak French?”

The truth is yes, I do speak French, but you might lose me a bit when you get into the intricacies of a mussel’s digestive system.

Questions that are easier to answer than “how long does it take to learn French” might look like: 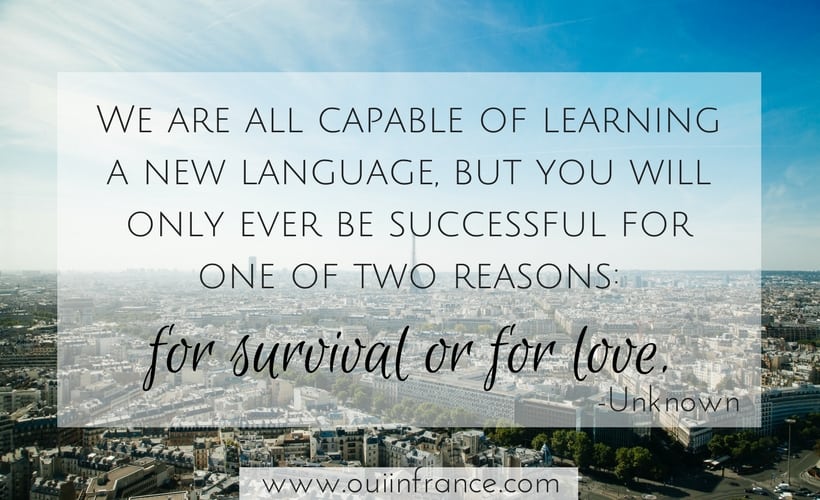 Some factors that play into the answers of these questions:

Just to give you an example, here’s how much formal learning time a beginner might need to learn English according to common European framework:

But even after C2, is learning ever done? No way! I learn new words, etymologies, linguistic facts, and more about my native language all the time and I’ve been speaking it since birth. So in French? You bet I’m still learning!

What is language learning?

Language learning can be overwhelming. A joy. Eye-opening. Frustrating as hell. Satisfying. A total breeze.

Above all, it’s constant.

So the answer to the question “when did you learn French” or “how long does it take to learn French” is…. it’s constant. That’s my answer.

I learn every single waking minute of every single day. Even if I’m not aware of it. And that’s the truth. My answer will always be a shade of gray.

Did you learn a language as an adult? Tell me about it!

PIN my how long does it take to learn French post: 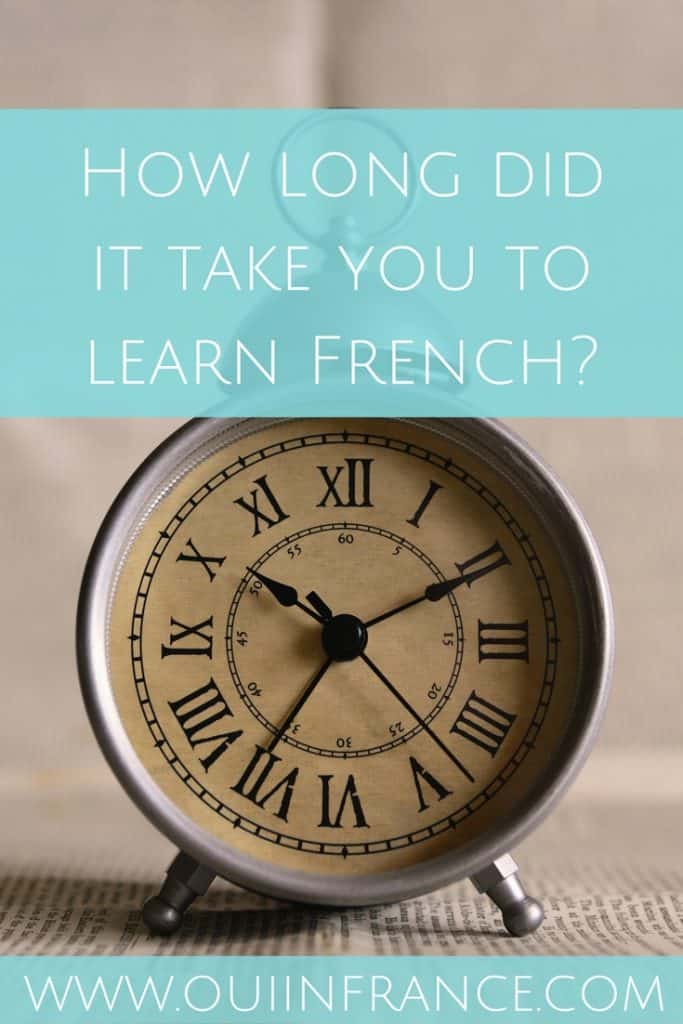