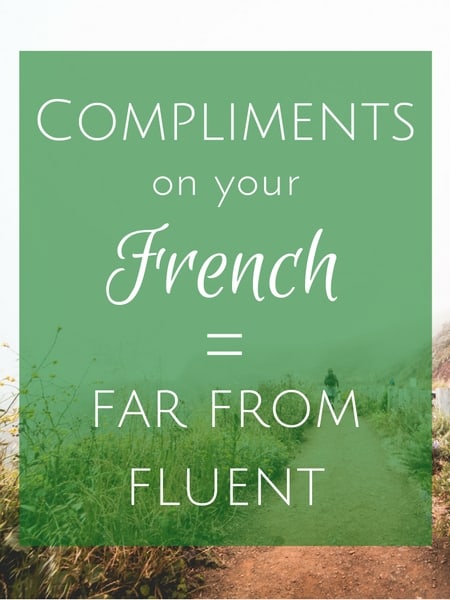 You’ve been living in France for a little while now. At first, it might seem like a good thing when native French speakers compliment your French. Yay, someone has noticed! You feel proud, accomplished and like you’ve made progress… and you should feel all of these things. Congrats! Language learning is hard. But the real marker of progress is when native French speakers stop complimenting you on your French. That’s when you know you’ve majorly improved. Yes, really. Why is this the case?

Let’s talk about why compliments mean you’re not fluent.

Compliments are awesome and I go out of my way to compliment others. But when we’re on the topic of language learning, compliments can be kind of weird. In certain situations, you’d expect a compliment on your French language skills and it’s only natural and welcome, so let’s start there.

(Also, I always write about the French language because it’s my life day in and day out, but what I’m talking about isn’t specific to just French.)

Instances where you’d expect a compliment include:

What I’m referring to here is a different group of people. You know the ones, those random acquaintances or even people you’ve just met who proclaim that “your French is really good!” or something to that effect, with a little hint of a smile and encouraging tone.

Maybe they tell you this after you just clawed your way through a particularly difficult sentence. Or after you mispronounced something and had to repeat it a few times. Or after you stumbled. Or from a waiter after you’ve just ordered a beverage. Or the guy at the hotel front desk upon your arrival in France.

These types of compliments are sincere, sure, but they’re also trying to make you feel better.

There’s nothing wrong with that and sometimes it feels great to hear someone who has no stake in the game tell you that you’re actually good at their language! Most of us at our core just want to encourage others.

19 things that are true when you have an accent >>

But what does someone complimenting your French mean?

That you’re far from fluent.

All of us non-native speakers who have spent any significant time in a French-speaking country and have mustered up our best French have been told that our “French is really good!”

The longer we’re here, the less frequent it hopefully becomes.

Really, being told nothing is a good thing.

If you went up to a native Spanish speaker who has been living in the US for 10 years, someone who clearly has an accent in English but can get their point across without a hitch, and tell them, “Wow, your English is so good,” they’d probably reply with a confused, “Thanks. ”

It’s almost insulting to tell someone who has been living in a country for several years and can communicate that they’re good at a language.

Think of it a different way — do you compliment other native English speakers on their English?

Of course not. They speak the language like you do. No issues whatsoever, so telling someone who speaks just fine without any hurdles is overkill. Accent or not.

And yes, I get that the person with the accent isn’t a native speaker, but if the accent doesn’t prevent them from communicating just fine, does it matter? Would a compliment come across as more of an insult?

Again, I’m talking about compliments from random strangers and not people who you know well. And yes there are exceptions, like speaking a less common language where it’s rare to hear someone with an accent at all. If you speak a rare language fluently, it may surprise people so they will compliment you. That’s different.

But back to what I was saying. If you have no trouble expressing yourself and rarely stumble, why would someone who doesn’t even know you feel the need to compliment your language skills? They don’t know your story or how far you’ve come. Really, fewer compliments means you’re improving even if that seems counter intuitive on the surface.

ItchyFeet even made a comic about this concept!

So if you’re living in the country where the language is spoken and have noticed a decline in the number of people who have complimented your language skills, don’t be discouraged — this might actually mean that you’re fluent!

What do you think? Have you noticed that you’re getting complimented on your French less frequently the longer you live here?