One of my favorite topics on this blog is the French language, and why is French so hard, you ask? I’m going to get right into it, but truth be told, I love sharing my trials and tribulations as a foreigner. The mistakes, the frustration, the accent and more. Even if you consider yourself fluent in French or pretty close to it, certain situations will still send shivers down your spine (or maybe it’s just me). Situations like what, you ask?

Is French hard to learn? Read on!

Why is French so hard? You’ll want to run and hide

When speaking in any language other than your native language — especially when you’re at a lower level — you’ll naturally have situations that leave you confused, stressed out, ready to binge on Netflix and questioning what you’re doing with your life. It’s only normal. Sometimes this happens more often than not… especially in the following scenarios. And fear not, none of these are overly France specific. You can delight in language learning fun below no matter what language you’re trying to speak. 😉

Is French yard to learn? Here’s when you’ll want to run and hide:

Conversing with pint-sized members of our society can be stressful in your native language when the child is still learning how to speak properly, but in your non-native tongue? It’s 10 times worse.

What if you don’t understand?

They may not be able to pronounce the sounds of the French language correctly yet or use proper grammar, so if you’re a little shaky in French to begin with, speaking with kids might make you want to steer clear. They may not understand why you have an accent and make mistakes often. Maybe you’re the first foreigner they’ve encountered!

Luckily for me, our niece and nephew are now old enough to be understood, and my only other interaction with kids is always in the park with Dagny. The come toward us with their hands outstretched and even if what they say sounds nothing like “Est-ce que je peux caresser votre chien s’il vous plait?“, I know it means “May I please pet your dog?” Context is everything. In general though, I’ve lucked out with kids not caring if I sound different.

How long does it take to learn French? >>

Talking on the phone

There’s something about not seeing a person face to face that makes communication a little more difficult if you’re not used to it and this is a major example of why learning French is hard. Without body language and facial expressions, words are just words and that’s why telephone conversations can sometimes be nerve wracking. When I first arrived in France, I’d do everything possible to avoid talking to someone on the phone. But now it’s gotten a lot easier, and usually the pharmacy or pizza place knows me by my accent and they know exactly why I’m calling.

So if you are trying to decipher it in your head, you may hear quatre-vingt and think 4 or 20 and then realize it’s 80 and by the time you figure that out, the person has already said 2 more digits that you’ve completely missed. Even now, I always listen to voicemails a few times when the person leaves their phone number. They whiz through it so fast that I rarely get it on the first try! Why is French so hard?

Will I be fluent in French after living in France for a year? >>

When speaking to someone with an accent much heavier than yours

Accents aren’t always easy to understand. It depends on the person and their level in the language and also how good you are with accents. What happens when I encounter someone with a super heavy accent? I know I’m going to be apologizing a lot and saying, “Really it’s me, not you!”

My landlady when I first moved to France had a very, VERY heavy Italian accent that even Tom had trouble with. There’s a Portuguese lady in the park that I have the same difficulty understanding. Sometimes two foreigners speaking a common language is easy-peasy and other times it’s quite difficult.

You’re feeling good. You’re proud of yourself. You’re speaking about a semi-complicated topic and then bam, it hits you. You’ve gotten midway through your sentence and just realized you have no idea how to conjugate the verb you need in a specific tense. Do you a) guess and hope the person understands or b) ask the person to help you out with the conjugation or c) scramble in your head to rework the sentence using words you do know? It’s up to you, but good on you for being ballsy enough to try. That’s how we learn!

Tell me, is French hard to learn? What’s your experience been? WHy is French so hard? What are some other instances where speaking a foreign language makes you want to run and hide? 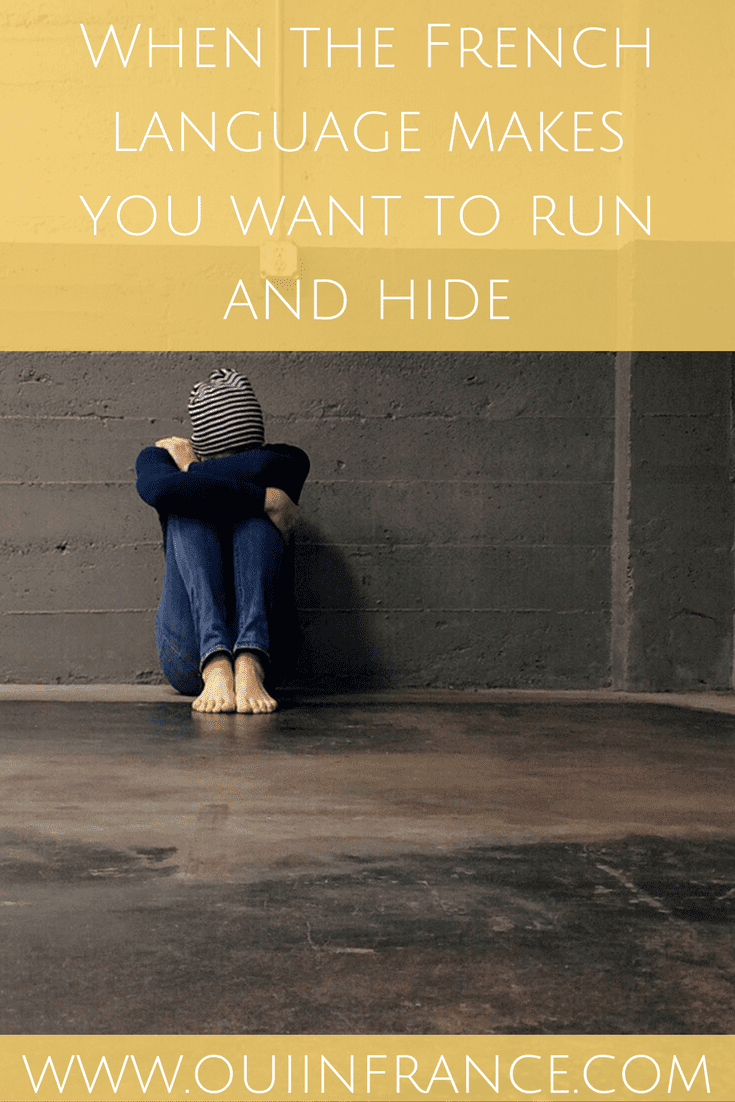 How long does it take to learn French?