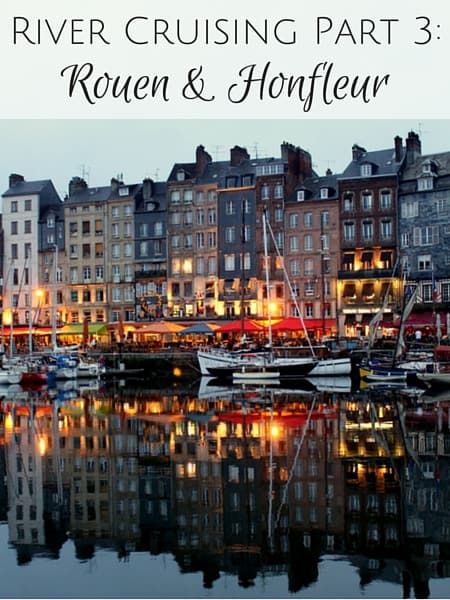 Normandy, oh Normandy. How nice it was to see you again! The last time I was in Normandy was about 4 years ago and it was great to be back! Last month, Tom and I were aboard the Seine Princess on a CroisiEurope river cruise from Paris to Honfleur and the last two days were my favorite. We made our way to Rouen and then finished up in photogenic Honfleur.

In case you’re just tuning in here, be sure to check out Part 1 and Part 2 of our Normandy river cruise aboard the CroisiEurope Seine Princess! 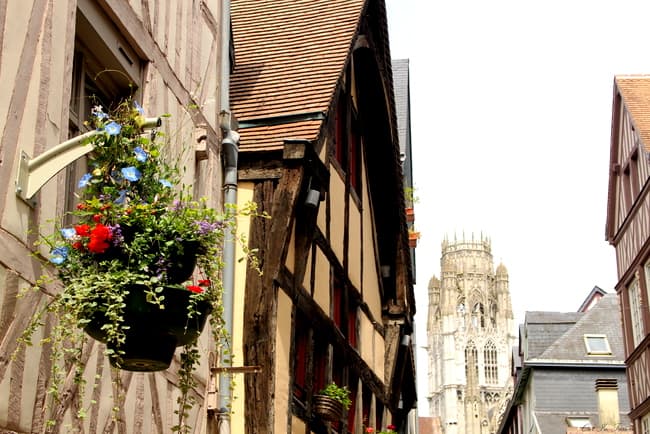 A walk through Rouen

We arrived in Rouen on Sunday to sunny skies! Sundays in France are very quiet but that didn’t stop us from having a wonderful day. After docking, we joined our group for a guided walking tour of the city. CroisiEurope offered tours in both English and French to accommodate everyone on board, and we were given headsets that allowed us to hear the guide from afar. Then we were off! 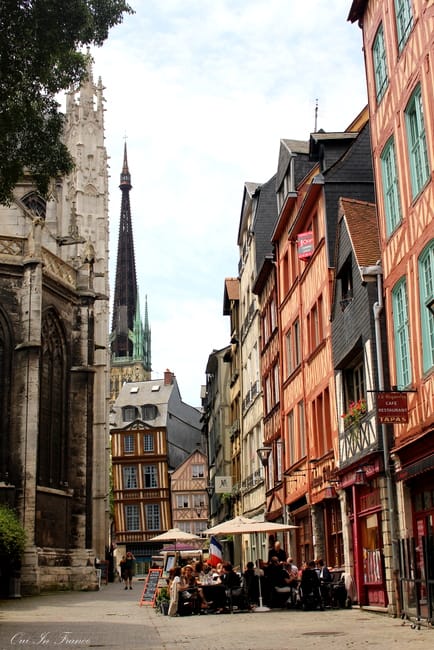 Right away you’ll notice that Rouen’s cobblestone streets are lined with beautifully restored half-timbered houses, gothic churches and outdoor cafes and shops that remind you of the town’s historical roots. Locals and tourists alike were out and about taking advantage of the warm day. While stores are mostly closed on Sundays, cafes are open and ready for business. 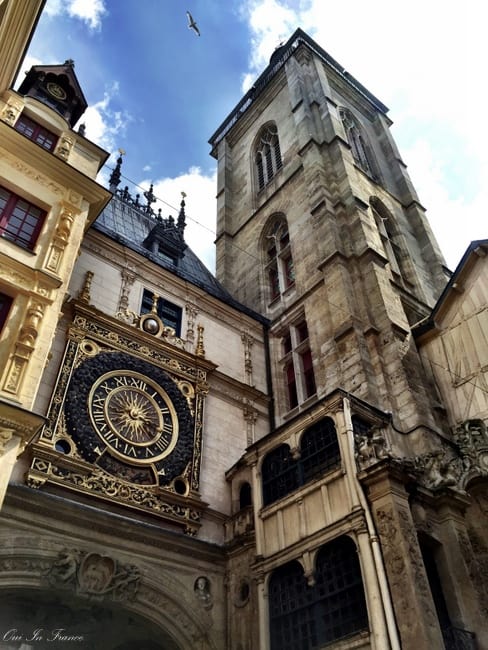 As you discover all the town has to offer, you’ll want to stop at Rue du Gros Horloge and snap a shot of the striking gold clock that dates all the way back to 1389 and measures 2.5 meters across. It’s hard to miss! 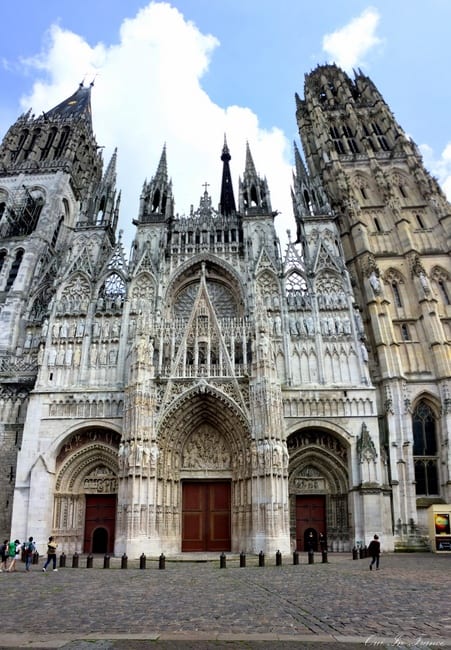 There’s also no shortage of churches in Rouen. The Notre-Dame Cathedral dates back to the 12 century and is gothic architecture at its finest. This magnificent church served as inspiration for Claude Monet who often painted the church’s facade in 1892 and 1893. 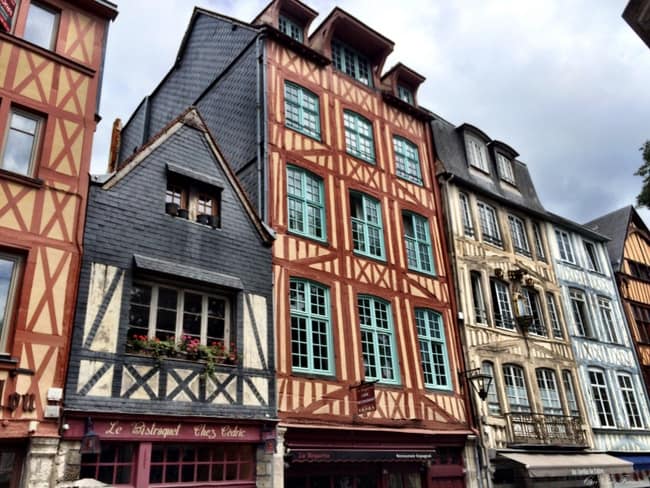 Rouen is home to about 2,000 half-timbered houses and about half of them have been restored. They come in all colors and make you feel like you’re in a fairytale as you walk along the streets.

After the guided tour ended, Tom and I took advantage of the sunny afternoon and continued exploring on our own. 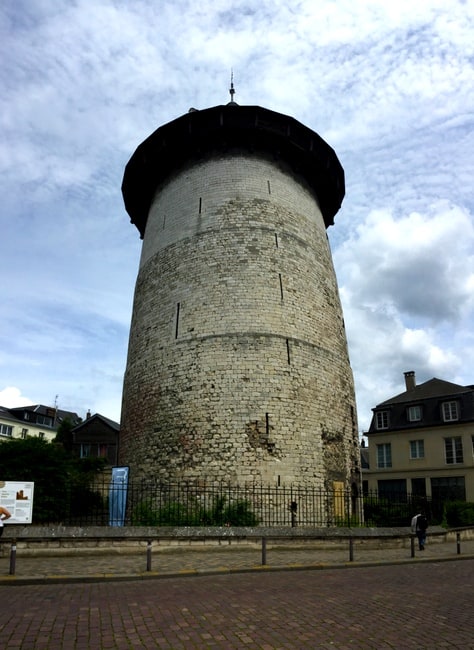 We found ourselves in front of the Joan of Arc Dungeon Museum where France’s national heroine was held captive on the ground level of the tower structure and tortured. Joan of Arc was burned at the stake in 1431 in Rouen but was found innocent at a second trial in 1456 after her death. We went upstairs to learn more about the history and what went on there via the exhibits and posters. The dungeon is all that remains of the castle built in 1204 under the reign of Philippe Auguste. 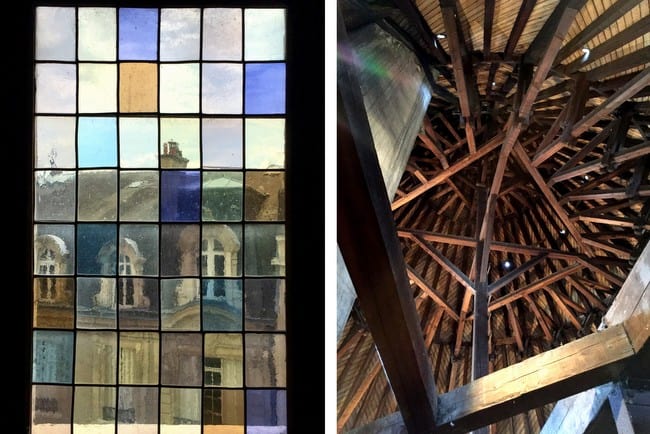 Onward and forward we go… to Honfleur!

The next morning, we left Rouen and headed toward Honfleur. Here are some pics of what we saw along the Seine. It was calm with beautiful landscapes and houses. The sun kept peeking out! While cruising, we also got a tour of the wheelhouse and learned about what all of the levers and buttons do. I claimed a corner of the sun deck for my workout and busted out some walking lunges, squats and pushups as I watched the scenery pass by. 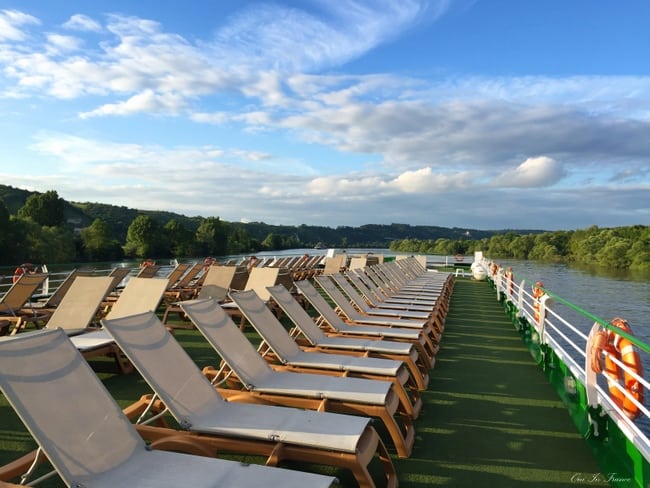 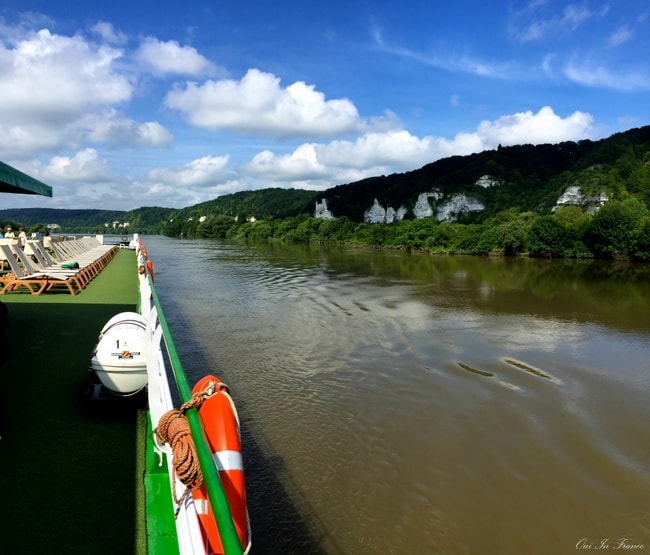 After a couple of hours of cruising, in the distance, we saw the Pont de Normandy which meant we were approaching Honfleur. The 2143-meter bridge is quite a sight and opened in 1995, connecting Le Havre with Honfleur. 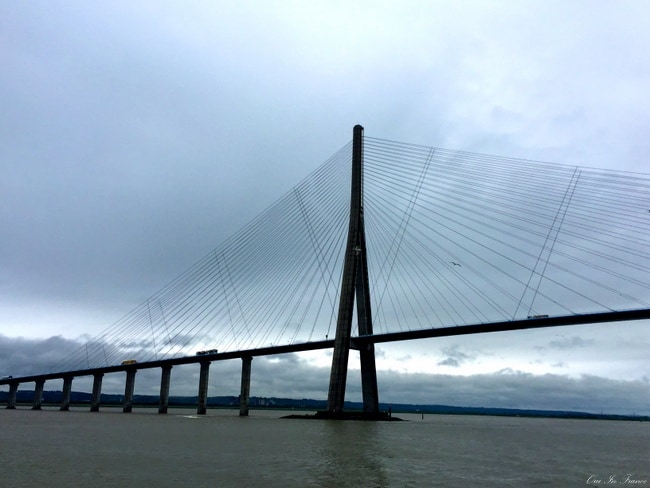 With a population not even scratching 10,000 people, the small town’s historical roots date back to the 9th century when the Vikings settled in what was then called Honnefleur. Later in the 18th century, Honfleur served as inspiration for painters and even today you’ll see artists painting the Vieux Bassin pictured below. 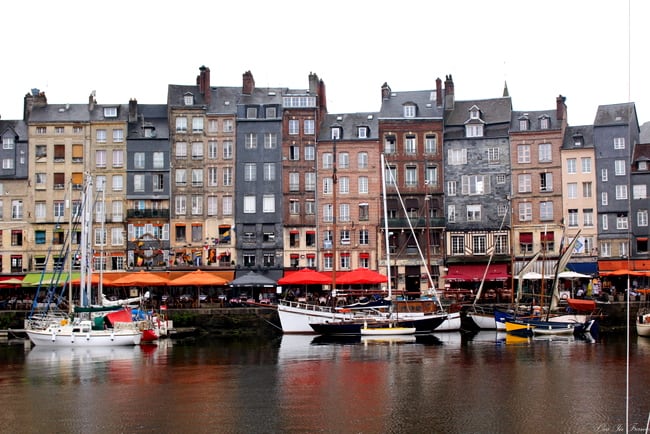 It was raining when we first arrived but once the weather cleared, we went out on foot to explore. The streets have so much character and the port, built in 1681, is colorful and lined with restaurants and shops that act as the foundation for the narrow homes above. Most of them were built between the 16th and 18th centuries. The shot below was taken at dusk.

CroisiEurope guests also have the option to book an excursion to the D-Day Beaches including Omaha Beach and the Normandy American Cemetery & Memorial, and the Americans at our dinner table took advantage of that. Tom and I were there several years ago (totally worth the trip) so we decided to stay in Honfleur this time around. 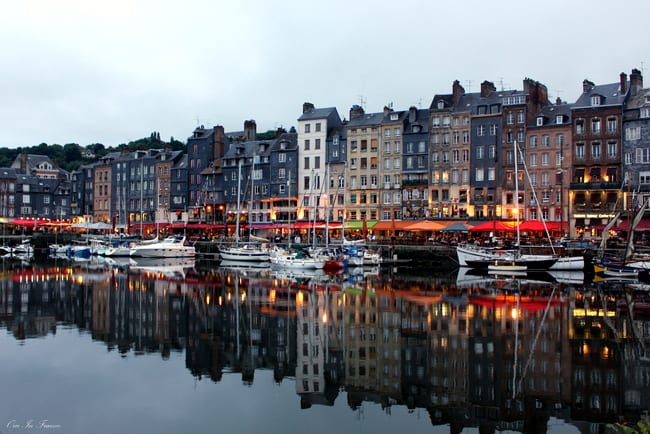 Like the good tourists we are, we popped into a regional products store to pick up a few souvenirs for my in-laws who were watching Dagny for us. Saucisson, some local beer and cheese were musts.

I have a thing for carousels and sat down on a bench to appreciate the view and ambiance of the picturesque Normandy town: 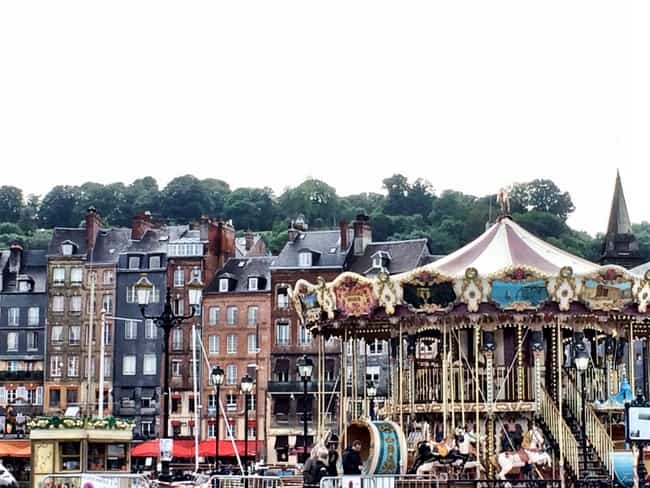 As we walked back to the Seine Princess later on, I took a few more shots of lovely Honfleur at night. Sadly, it was time to pack up our suitcases because the cruise was ending the next morning. 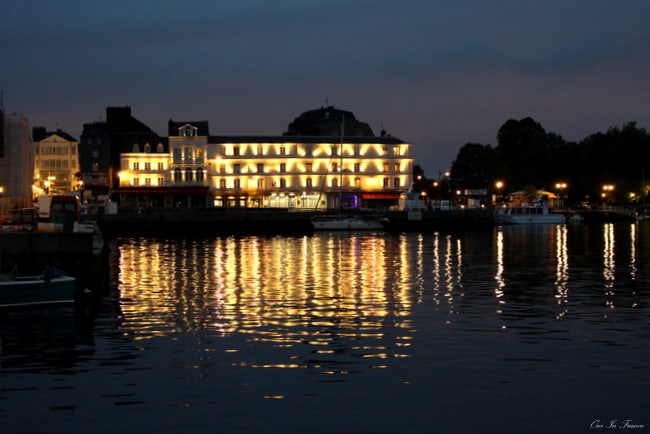 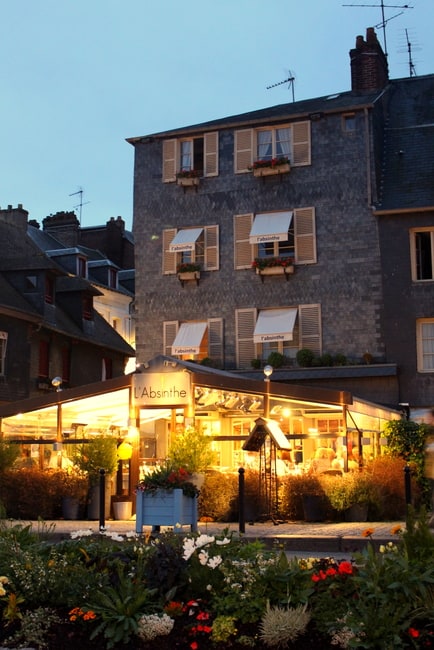 Have you ever been on a river cruise? Or visited Normandy? What did you think?

You can read more about the CroisiEurope Seine Princess here.

« Things I’m good at
Is French hard to learn? You’ll want to run and hide! »