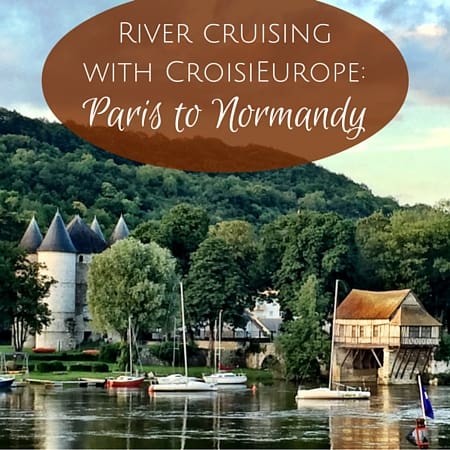 Tom and I recently spent a long weekend cruising on the Seine from Paris to Normandy aboard CroisiEurope’s MS Seine Princess, and there’s something about seeing a place from the water that’s really special. If you’re new to river cruising or have never considered it before, let me fill you in on this one-of-a-kind experience. A France rive cruise is so much more than a hotel on the water and this France river cruise Paris to Normandy was a standout experience!

River cruising has become hugely popular in recent years in Europe and for good reason. Prices have become more reasonable and people are catching on to their appeal. With itineraries all over France and for a variety of lengths, a France river cruise offers a fantastic, stress-free way for the francophiles among us to discover France from a new vantage point. Food and drink are generally included and excursions are top-notch ways to learn about the areas you visit. One particularly accessible cruise for anyone visiting Paris is the 5-day CroisiEurope cruise from Paris to Honfleur in the Normandy region of France. Tom and I thoroughly enjoyed ourselves! 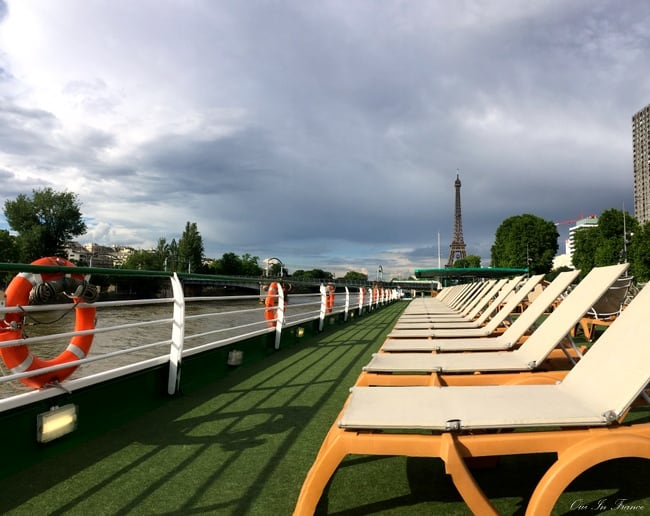 We boarded the Seine Princess around 5 p.m. on Friday, cruised for the next couple of days throughout the Paris region, up to Rouen and later arrived in Honfleur — 350 kilometers of cruising later. The trip ended Tuesday morning at 9 a.m. when we disembarked. It flew by!

Here’s an overview of our France river cruise Paris to Normandy. Please stay tuned for more about our river cruise experience in the coming weeks! 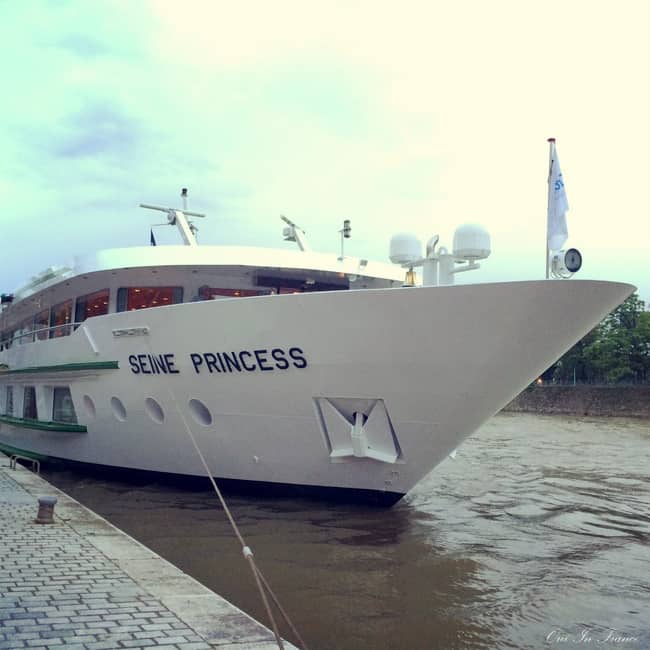 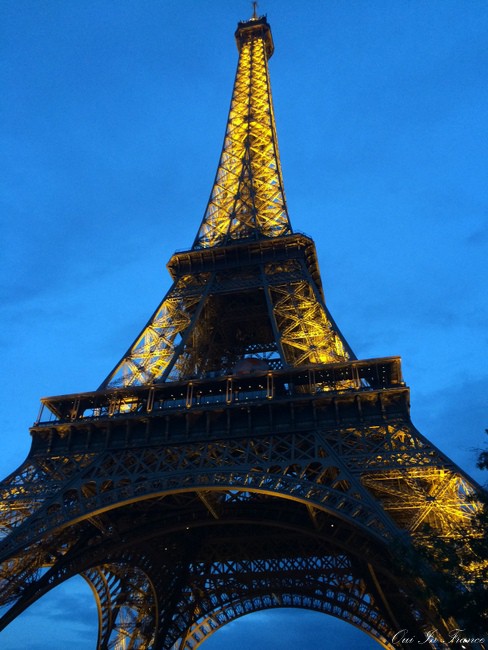 Day 1: Boarded the Seine Princess on Quai Branly in Paris around 5 p.m. The crew was introduced during the welcome cocktail and then we headed to the dining room for dinner. Normally there’s a night cruise along the Seine but we stayed docked due to high water levels that unfortunately didn’t allow us to safely pass under the bridges. Overnight stop in Paris.

Day 2: Departed Paris early and headed toward La Defense and then docked in Poissy. We got off the boat and went on the excursion to see the Palace of Versailles including a tour of the gardens as well as inside the chateau. While out for the day, the boat continued along the Seine and docked at Mantes La Jolie, where we reboarded after our tour. The ship left in the afternoon toward Vernon where we spent the night.

Day 3: The ship leaves and heads toward Rouen. We take the optional walking tour of the city with a guide and then decide to explore a little on our own. Gala dinner on board.

Day 4: The ship leaves at 4 a.m. toward Honfleur and we arrive around 10 a.m. Optional walking tour of the city. Once the rain stopped, we headed out on our own to discover Honfleur.

Day 5: Our France river cruise Paris to Normandy is over and passengers disembark at 9 a.m. 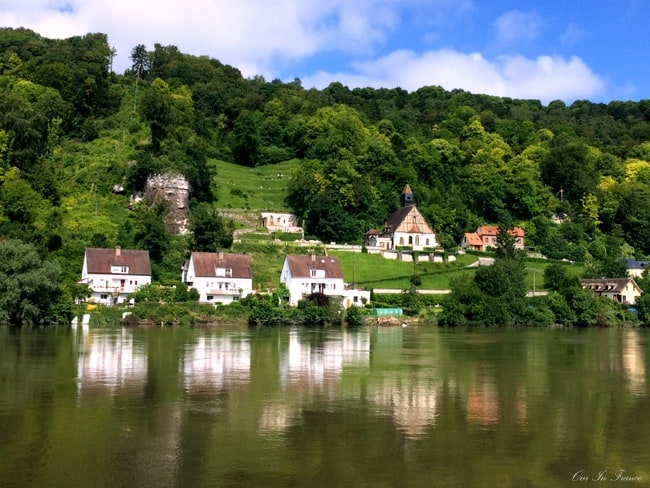 If you don’t know much about CroisiEurope or what a France river cruise Paris to Normandy is like, here’s a little background info:

CroisiEurope is the biggest river cruise carrier in Europe and extremely popular with Europeans. A family-run business founded by Gérard Schmitter in 1976 and headquartered in Strasbourg, France, CroisiEurope has a fleet of 50 ships that cruise Europe’s rivers in France, Italy, Spain, Germany and Belgium.

In 2012, the company created an English-language website and since then, there has been a surge of anglophone guests from across the Channel and Atlantic. Most of the ships can accommodate between 100 and 200 guests making the experience intimate with great service but with enough space to still do your own thing. English and French are spoken on board (as well as any other languages needed to communicate with passengers).

Before going on a river cruise myself, I wasn’t familiar with the concept and thought maybe they were day cruises. That’s not the case! The ship acts as your home base and that’s where you sleep, eat and hang out. It’s more or less like a fancy hotel that moves you down the river. On CroisiEurope, there’s free Wi-Fi in the lounge.

Meals are included in the price of the cruise as well as all wine, soft drinks and other beverages. The vantage point from the river is spectacular and I highly recommend CroisiEurope as an affordable river cruise option to see the Seine. 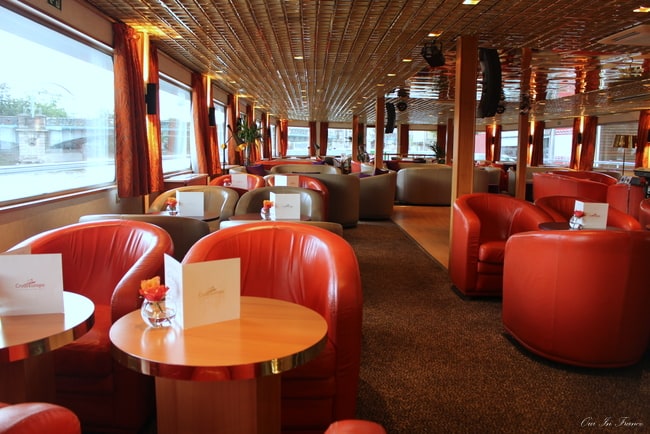 Are you in my area of France, the Loire Valley? CroisiEurope let me come on board the MS Loire Princesse in the spring to take some photos I shared here >>

What’s up next on our France rive cruise? The destinations, a look at the food and more. Stay tuned!

Have you ever gone on a France river cruise Paris to Normandy? Is it something you’d be interested in?

« Quick French lesson: Words you can shorten to sound cool
Frustrations of living in another language »