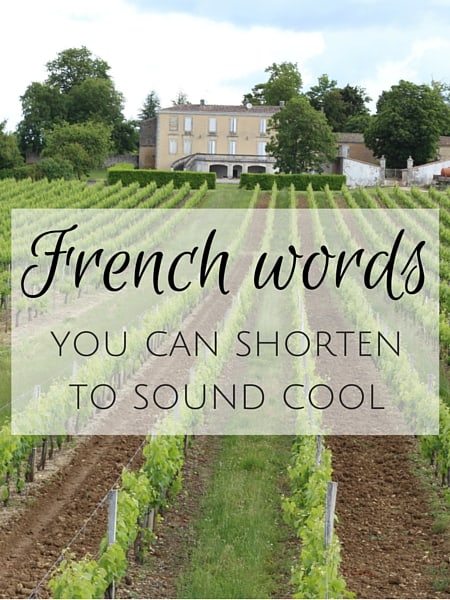 Let’s talk language shortcuts. Sometimes you just don’t have time to get the whole word out. In English, depending on where you’re from, present becomes pressie, afternoon becomes arvo and breakfast becomes brekkie — and that’s the tip of the iceberg. What about in French? There are similar shortcuts. Next time you’re having a conversation with someone in French and one of these words below comes up, use the shortened form. It’s more natural, common and ultimately more cool.

French words you can shorten to sound cool

If you aren’t sure about whether or not you can shorten a word, it’s best to go with the full version if there’s any doubt. Most words you do NOT shorten and sometimes it can even get you in trouble. Like if you want to say something is perfect, you say it’s nickel — pronounced more or less knee-kell. You can’t just say “nick (neek)” because it sounds like nique which is not suited for polite conversation. So stick with the ones on my list below.

My best tips to make your French sound more natural >>

My list of French words you can shorten to sound cool:

Impeccable becomes impec: I hear this one all the time! It’s totally normally when someone asks you how you’re doing to reply with impeccable (or just impec).

Restaurant becomes resto: Super common to shorten this one.

Après-midi becomes aprèm: You’ll hear this one a lot too. And remember après-midi is feminine and masculine so une and un both work.

Personellement becomes perso: Another good one to know.

Ordinateur becomes ordi: I feel like teens and kids use this shortened form of computer the most.

Colocataire becomes coloc: Chop that extra syllable when you’re talking about a roommate.

Véterinaire becomes véto: Common but for some reason I always say the entire word.

Dégueulasse becomes dégueu: Heard a kid say this on Top Chef a few weeks back.

And there are so many more French words you can shorten.

What French words do you have to add?

What does province mean? No, it’s not the same as Provence! French accent in English: They sound great unless you say one of these words