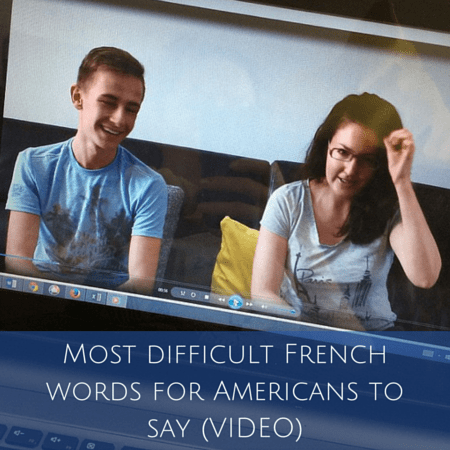 The French language is far from easy and one of the most difficult aspects for new learners of the language is pronunciation. Some words just don’t come out correctly. Ever. It’s fine if you’re just passing through as a tourist, but when you live here and have to master the language to get by, nailing your pronunciation is of the utmost importance. You can make yourself understood with bad grammar and other mistakes, but if no one can understand the word you’re trying to get out? Yeahhhh, that’s not fun. It is funny though — after you’ve had time to reflect over three glasses of wine.

Here are some of the hardest French words to pronounce for an American (and my first video!)

Most difficult French words to pronounce for Americans

I’ve been fumbling around with French for a few years now and I still botch a whole bunch of words. It’s a fun hobby of mine. I have many.

Below is a short list of words that are difficult in French that give Americans trouble (and maybe most English speakers although this is based on my personal experience as an American). And according to Tom, I’ve greatly improved. 😉 So there’s that.

Here’s my video debut on Oui In France. I’m joined by my friend Guénaël (I call him Gwen because it’s easier to get out) who is demo-ing the French for you (Tom is camera shy). I met him at the gym and learned he had done an exchange program a couple of months prior in Washington State. So we hit it off and take classes together at the gym. And he helped paint my house because he’s awesome. Excuse the nervous moving around.

Here are the words that made my short list of the most difficult French words to pronounce:

The French “r” is what nightmares are made of. And I had plenty before my French teacher Yvonne sat me down and taught me how to say the “r” correctly and I’ve never looked back. Some of these words are perfectly understandable when pronounced terribly but others won’t be recognizable. So say ’em right(ish)! What are the hardest French words to pronounce for you?

Quinquaillerie. Luckily you don’t use this one too often. It’s the hardware store and is annoying to say.

Écureuil. This one means squirrel and is a little tricky for the tongue. On the flip side though, squirrel isn’t that easy for French speakers to say in English.

Grenouille Sticking with animals for a sec, the good ol’ frog is difficult to say. But once you’ve got it down, andouille is a piece of cake.

Rassassier. This one means you’re full. Use it after you’ve eaten a good meal.

Roi. This one means king and words starting with “r” tend to be trickier than those that just have an “r” in the middle.

Rare. And if the word has an “r” in the middle and beginning. Eek. I can more or less say it slowly but in a sentence? I sound like I’m choking.

Reims. Just in case you’re unsure of the pronunciation, let Guenael clear this up for you. It’s not pronounced like reems. Too bad I don’t live in Reims because I can oddly say this one pretty well.

These words aren’t super difficult and don’t contain the letter “r” but the vowel sounds can be a little difficult to master. You’ll be understood (context helps) but English speakers usually say these incorrectly. Just noting a couple because the list is huge.

Une. Comes out like “oon” if you’re not careful.

École. This one means school and the vowel takes some practice.

Aurore. THIS IS THE WORST NAME EVER. To say, I mean. Aurore is a lovely female name. Really, I have nothing against it but I think it hates me. Thank god I don’t know any Aurores in real life. I know how I’m supposed to say the name in theory but I break it down into two choppy, slow syllables to get it out properly. Otherwise it comes out like horreur which is definitely bad. Like I said, glad I don’t know any Aurores! Aurélie isn’t a piece of cake either. Said fast, it sounds like Orly (as in the Paris airport).

Hope you enjoyed the video on the hardest French words to pronounce? Would anyone be up for more videos? And a big thanks to my friend G. 😉

What words in French are the most difficult for you? And for my French readers, what words give you the most trouble in English?