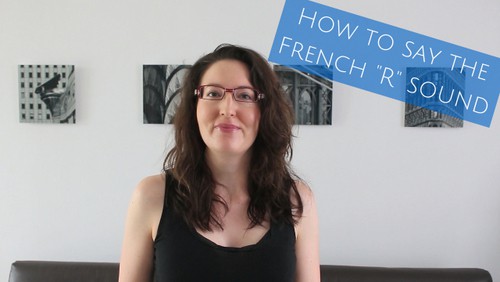 For those of us learning French, the “R” sound is the stuff nightmares are made of. It’s a sound that’s not found in English so naturally we struggle. It often comes off too harsh when we try to mimic what we’re hearing or we just give up and go to the other extreme and pronounce it like the English R. Both are wrong. So how do you say the French R?

I’m explaining what worked for me in today’s video…

How to say the French R

Once you master the French R you’ll feel like a million bucks. Once you get it even a little, you’ll feel so proud of yourself. There’s not just one way to learn it, so I’m sharing how I was taught and what worked for me. Practice makes perfect so stick with it.

Something I said in the video is that the “r” is actually much more subtle than language learners think. If you listen to a native speaker, it’s there but not so overdone that it sounds like they’re gargling. Once you master it, dial it back.

Sooooo… let me preface this by saying 2 things. First, I have 0 experience being on camera or making/editing videos, so I’m learning as I go. I repeat, I have absolutely no idea what I’m doing. My cluelessness of all things video has stopped me from making videos up until now but I think videos can be really fun, so I said to myself, stop putting it off and just try. So I am. I promise you they’ll get better as I go. Second, in the example I gave, while it’s not majorly wrong, it’s probably more natural to say ma couleur préferée est le rouge. But for example purposes, what I said is OK. Just noting that I realize the more natural way is to say “le” but didn’t want to refilm. 😉

How has learning how to say the French R been for you? Did my tips help?

And if you’d like to see something in particular in a future video, let me know below!!

« How to have a bad experience in France
I want to hear from you! Craziest/most embarrassing/weirdest travel stories »