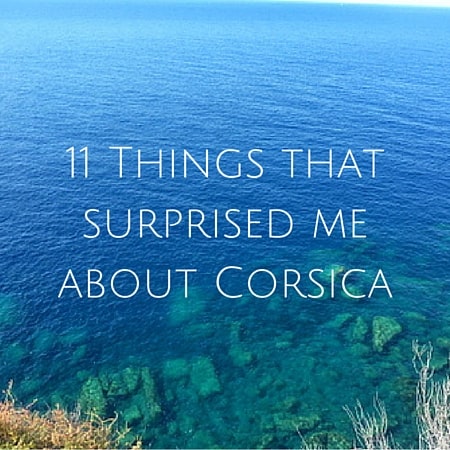 If you’re keeping tabs on things around here, you’ll know that I went to Corsica with my family last month and can’t stop raving about it! Almost every day while there, something stood out to me and either surprised me or was just unexpected so I’ve compiled a list for you to learn more about this must-visit island.

Here are 11 things that surprised me about Corsica!

Some of the items on my list surprised me ahead of time when we were still in the research phase and others didn’t become apparent until we were actually there in Corsica. And I use the word “surprised” loosely. Some of these may fall into the “didn’t realize” category and aren’t exactly shocking. Just things I didn’t expect. And if you missed it, here’s a post about the highlights of my trip! 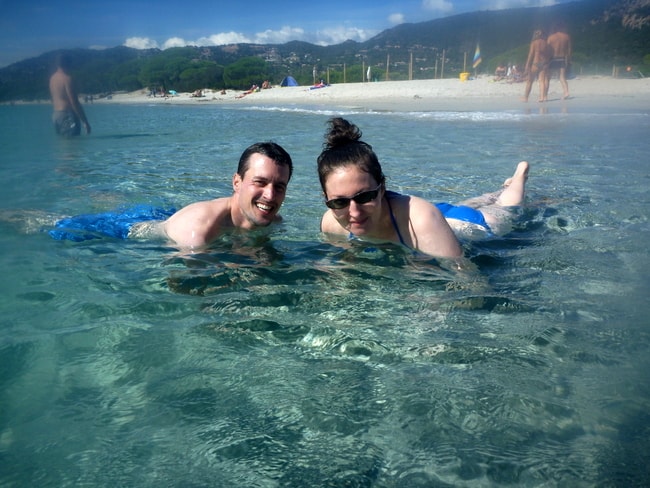 And I don’t just mean the tourists! 😉 It’s not that people in my corner of France seem unhappy exactly or that I assumed Corsicans would be unhappy but just the overall Corsican mindset and attitude seemed to be more upbeat and positive than I expected. Even just people’s pace and facial expressions and nonverbal communication came across as positive which seems to be quite different from what I see around me here.

If you love thin crust brick oven pizza, you’ll love Corsica! I’m a pizza fan and loved that every street had several restaurants boasting a wood-fired oven and a selection of mouthwatering pizzas. It’s almost comical how many restaurants we saw advertising their pizza! Aside from the Italian influence, pizza isn’t technically difficult to make and it’s cheap. So I took full advantage!

You may not think that beach weather would translate to cold wind and clouds up the mountain but it does! A 30-minute drive up the mountain can result in temperatures that are 20 or more degrees (F) cooler than at the base. Your sunny beach day is anything but once you’ve left the beach. So check the weather at your destination before you head out and make sure you wear layers topped off with a windbreaker.

4. The diversity of the landscapes. 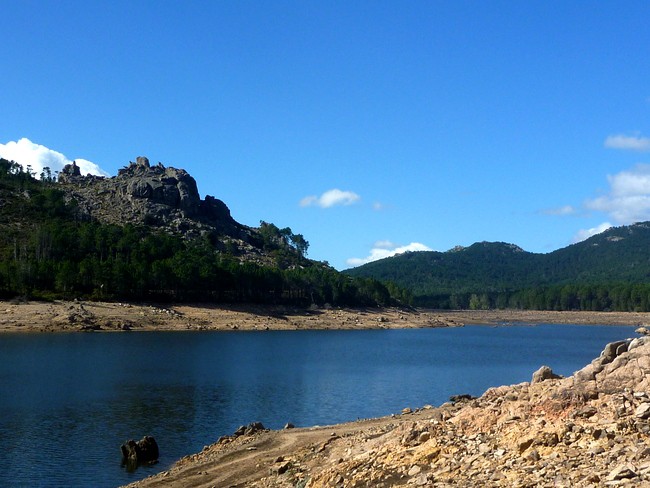 Sometimes photos lie so when researching Corsica prior to the trip, I took the photos I saw online with a grain of salt. Could a place really be that pretty? Maybe the water is. Or maybe the mountains are, but in its entirety could Corsica really look like the photos? YES! Truly stunning.

I’ve been to islands before but Corsica really stands out as my favorite. Before going on the trip I knew there would be a lot of things to see and do but once you get there, you understand just how majestic the place is. From outdoor activities like hiking and sailing to more relaxing activities to historical visits to gastronomy and more, Corsica has something for everyone. 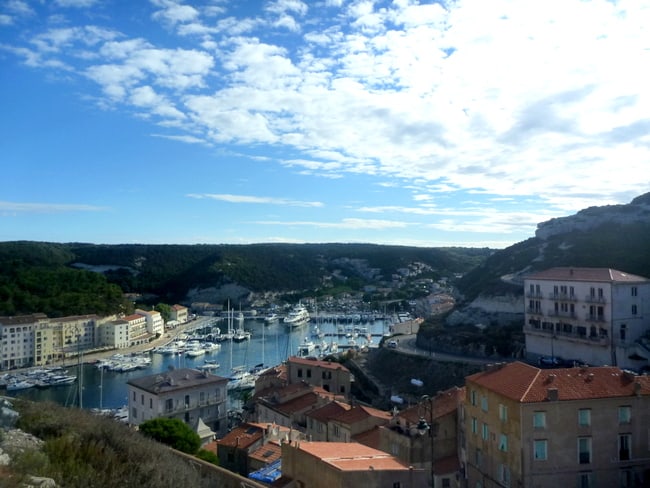 6. That even someone who doesn’t get motion sick can feel queasy.

I love roller coasters and haven’t ever felt carsick (except one time on a bus with a driver that I swear drove an automatic with two feet) but the roads of Corsica up in the mountains are windy, narrow and can make even the strongest of stomachs feel a little nauseous — even if the driver is doing his best to drive gently. There were some hairpin turns and the lack of guardrails might make you a little nervous. And if all that wasn’t enough, add in the Corsica drivers who will whiz by you and pass when it seems like there’s no space to do so. But don’t worry too much if you do feel a little queasy — all the more reason to stop often and admire the view!

7. English is not widely spoken.

I can only speak to the southern part of the island since that’s where I visited, but if you don’t speak any French, you may have some difficulty communicating even simple things like restaurant orders or directions. While I don’t expect people in other countries to speak English, I feel that travelers have become accustomed to it. As a whole, many shop owners, waiters and tour guides seemed to lack basic English knowledge, and while this wasn’t a problem for us since Tom and I translated, it might be if you’re with a group who does not speak French. I think I heard English spoken maybe 5 times total from other tourists. Most of the tourists were French. Makes sense.

Anyone who knows me knows I’m an animal lover and it pains me to see stray animals wandering around searching for food and a family to love them. Upon arriving in Figari airport, a rough looking dog with a collar was supposedly a dog from the village but I don’t think anyone cared for him because he happily guzzled down an entire bottle of water. Along with that, we had several stray cats meowing at our villa doors each night forcing us to keep them closed and not enjoy the breeze. When walking through town, we’d see several dogs that seemed to just roam the streets alone. All and all, there weren’t a ton of stray animals but enough for me to take notice. I’ve been places where the stray pet population was way more out of control than Corsica but even one stray animal is one too many.

9. It can be budget friendly.

Have you ever gone somewhere that was a tourist trap? No matter where you went or what you did, the place was a total rip off? You don’t have to worry about that here. Corsica is not one of those islands that rips off tourists from the minute they arrive until the minute they leave. Many grocery items were surprisingly affordable and even cigarettes were nearly 2 euros cheaper per pack than mainland France. When we inquired, we were told that items are taxed differently in Corsica. I found tours and activities to be reasonably priced as well. Unlike some tourist destinations where you can only stay in high-end hotels, Corsica has a variety of hotels at all star levels, camping sites, rental properties of all sizes and more. That’s not to say the island is cheap by any means but if you are on a budget, you will still be able to enjoy yourself.

10. It’s not just a vacation paradise.

What I loved about Corsica is that it’s not one of those places that’s a fake paradise. Have you ever been to a resort that seems heavenly and then you walk five minutes outside the property and see the darker side of the place? A place where after a week of vacation you feel like youv’e seen everything and it’s time to go home?

What you see is what you get in Corsica and there’s no fake vacation resort facade — you can walk around without fear of being harassed or robbed and when you’re in the grocery store, you see locals shopping with their families as well as other tourists and people just living their lives. There’s no superficial vacation bubble. While you can absolutely have a great honeymoon and lounge around, Corsica has so much more to offer in a setting that feels like a liveable place and not a fairy tale.

11. There are no McDonald’s restaurants.

The French love McDonald’s and I’m the first to admit that McDonald’s is infinitely cooler in France. They’re also one of the few places where you can get a cup of coffee to go in a paper cup with a lid. Corsica has that old town feel and is unspoiled by the modern chains that sometimes clutter cities in mainland France.

I can’t tell you enough how beautiful Corsica is. If you ever have the opportunity, GO! I’ve never felt more strongly about a vacation destination and I will be going back…. someday…

Anything surprise you about Corsica? Either on my list or when you went? 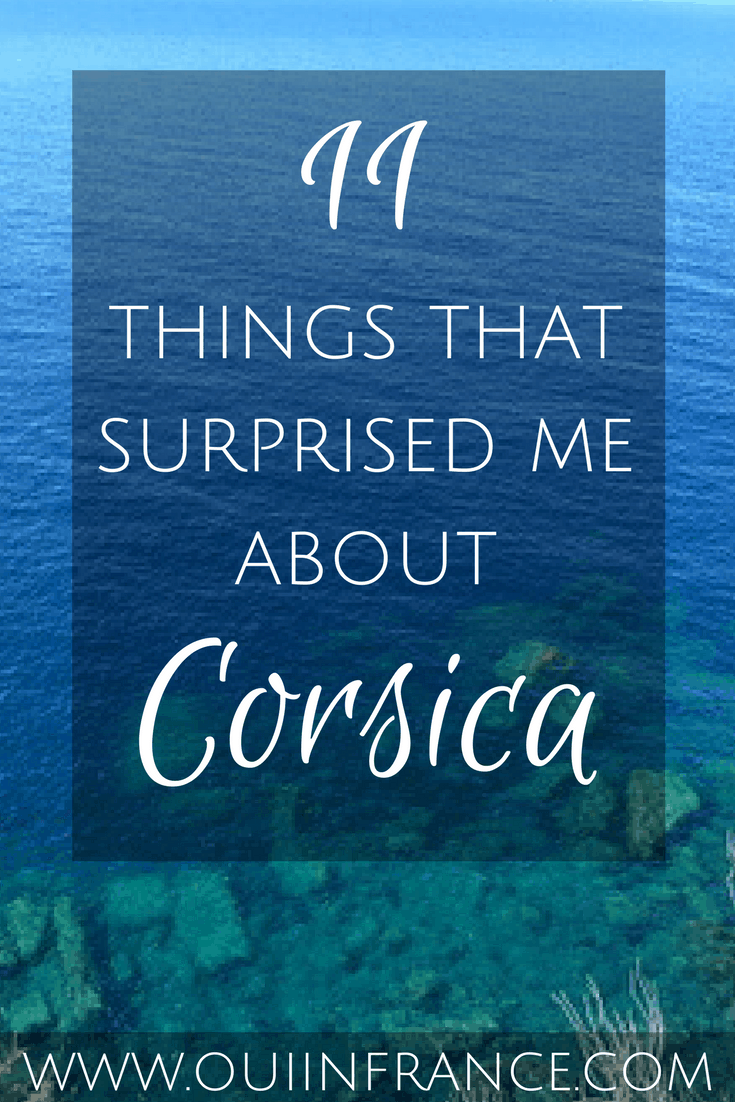 What surprised me about our trip to the USA?