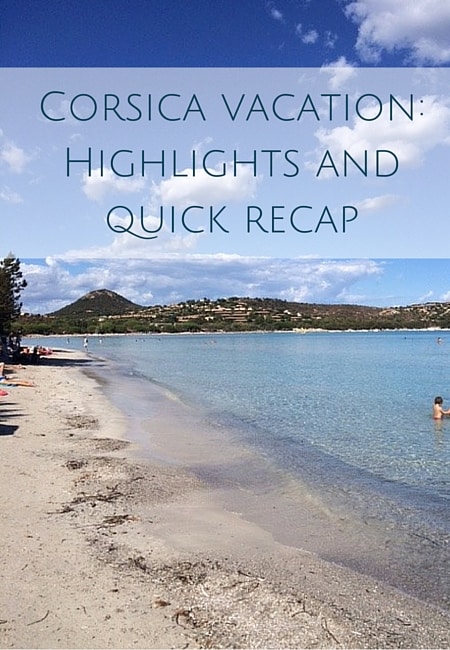 In France, the hot topic of conversation during the summer is vacation. Where you’re going and where you just got back from entered their way into all my casual conversations at the gym in July and August. And guess what? Not a single person had a bad thing to say about Corsica — so naturally I was suspicious. Is it really that great? (Yup!) Will my expectations be too high? (NO!)

I don’t even know where to start today, so I’ll just dive in and give you the highlights of our trip. I have so much more to say than what’s written here. First, Corsica was absolutely wonderful. I can’t say that enough. It’s a destination like no other and it was a fantastic trip. Whether you’re old, young, going with a partner, solo or your entire family, it’s a place you will absolutely enjoy. (To catch you up if you’re new around here, I went to Corsica for the second half of September with Tom, my parents, my brother and sister-in-law for a family vacation. You can check out the first post I wrote while still there on Corsica vacation tips.)

Here’s what we did!

Vacation in Corsica: Highlights and recap

If you had asked me 5 years ago before moving to France if I knew anything about Corsica, I’m not sure I could tell you much beyond the fact it was an island somewhere in the Mediterranean. Recently, I informally polled American friends and family for fun about Corsica and some told me it was part of Italy, some pointed to Cyprus instead and some were like, “Where are you going??? Never heard of it.” I didn’t feel so bad! (in their defense, a few knew Napoleon was born there and could identify it on a map). Since then I’ve done my research and am so glad I got to visit with my family.

First the facts: Corsica is an island that’s part of France and is off the southeastern coast of France just west of mainland Italy. Home to over 320,000 people and 3,350 square miles in area, Corsica has some of the most beautiful landscapes I’ve ever seen and is a top vacation destination for a reason. One that I desperately want to return to. 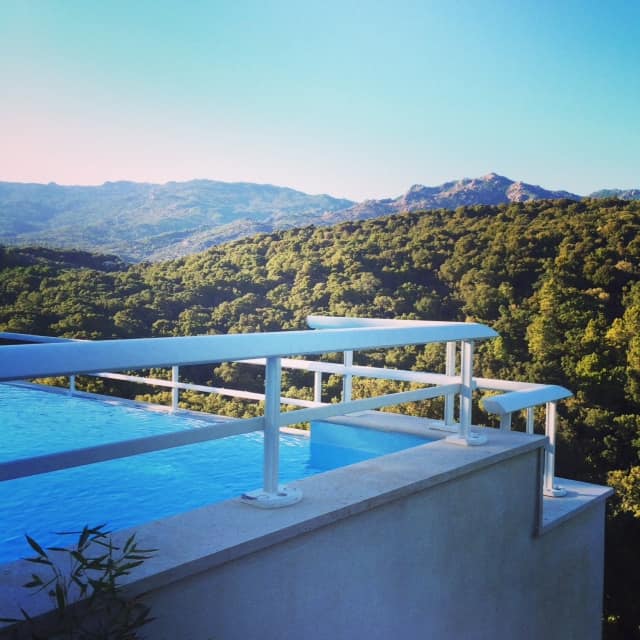 We rented a 3-bedroom villa not far from Porto Vecchio’s center just far enough up the mountain to be private and peaceful but still close enough to be able to get into town in just a few minutes. It had a beautiful view (shown above), a pool, outdoor seating and BBQ area and full kitchen, which allowed us to eat breakfast American style every morning complete with eggs and bacon. 😉 We also rented two cars.

We split most days into morning and afternoon blocks and figured out ahead of time what activities we all wanted to do versus the things just a handful of us wanted to do. All 6 of us wanted to do a quad tour, catamaran tour, hike, explore the cities and beaches (We went to Sartene, Bonifacio and Porto Vecchio), visit wineries and enjoy the food. Tom and I and my brother and his wife went canyoning without my parents. 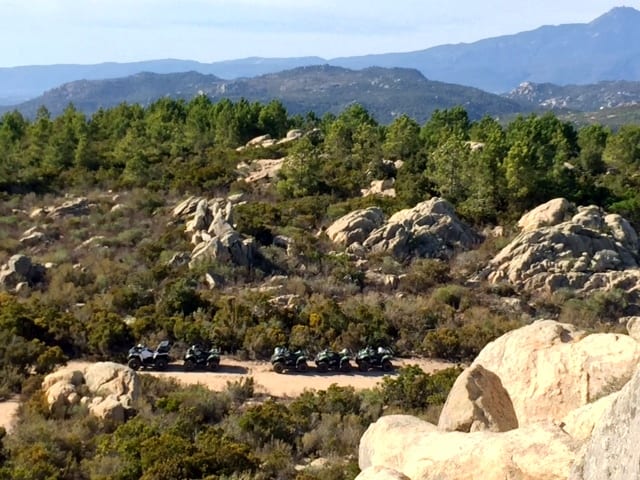 We left our home base of Porto Vecchio and headed to Tonnara Beach for a quad tour. Despite some technical difficulties with the quads stalling and some rough terrain, we had a great tour that took us up into the mountains overlooking the beach and all around the hills into a military area. We made two stops during the 2-hour tour for some photo ops and could even see Sardinia from one of the vantage points. Tom was the driver of our quad and I held on for dear life in the back. Most of the time I had my eyes closed until we stopped. I actually looked tan at the end from the layer of dirt that coated our skin! 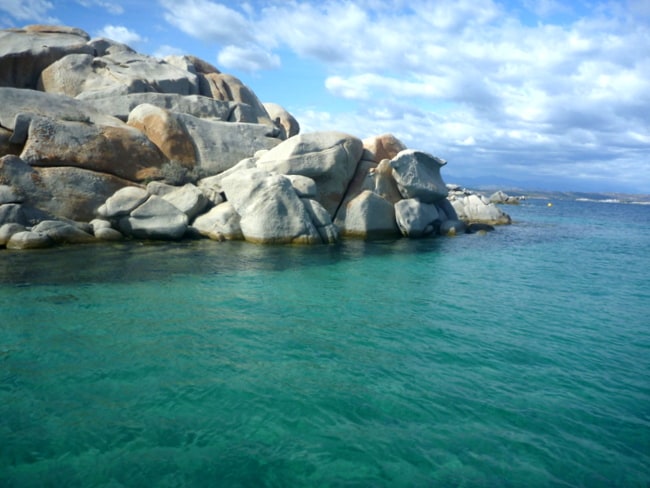 We spent the morning exploring the super touristy city of Bonifacio and then headed to a nearby beach for a catamaran tour that took us around to the Lavezzi Islands and made a few stops to snorkel, swim and paddle board. The first half of the tour was great weather wise but the clouds rolled in toward the end making it a little too cool to take advantage of the swim stop so we just admired our surroundings instead. The water is stunningly clear and turquoise and the homes along the coast are just as gorgeous.  We enjoyed the ride! 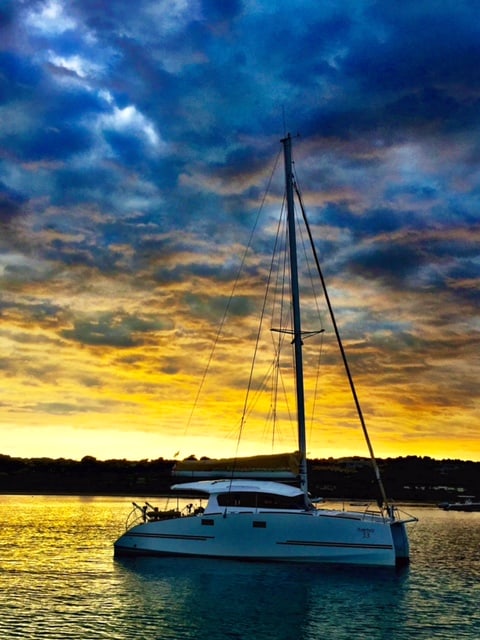 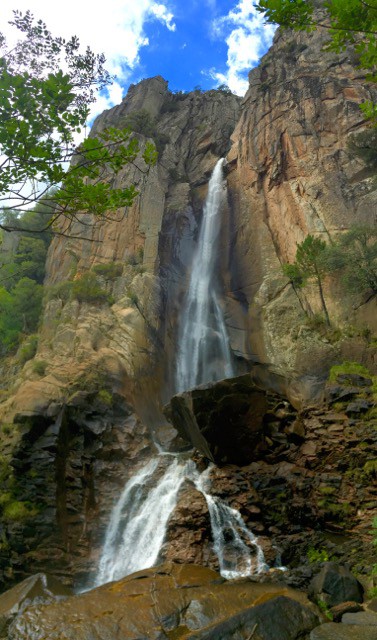 My brother grabbed a hiking guide when he stopped by the tourism office and we mapped out a few hikes to help get our fitness in. They were classified by level of difficulty and we decided we’d avoid anything above medium.

Our first family hike was to La Cascade de Piscia Di Ghjaddu where the reward was the beautiful waterfall at the end. The problem was that the descent at the end was pretty much straight down. Let’s say it’s way easier coming up than going down. Wear layers (probably took my jacket on and off 20 times) even if you go in the summer because it can get quite cool when you’re in the shade of the trees and then you’ll be sweating when you’re going straight up. We nicknamed Tom the Gazelle because he was light on his feet and seemed to have no trouble at all scaling the rocks. I was a little shakier on my feet and took my time. 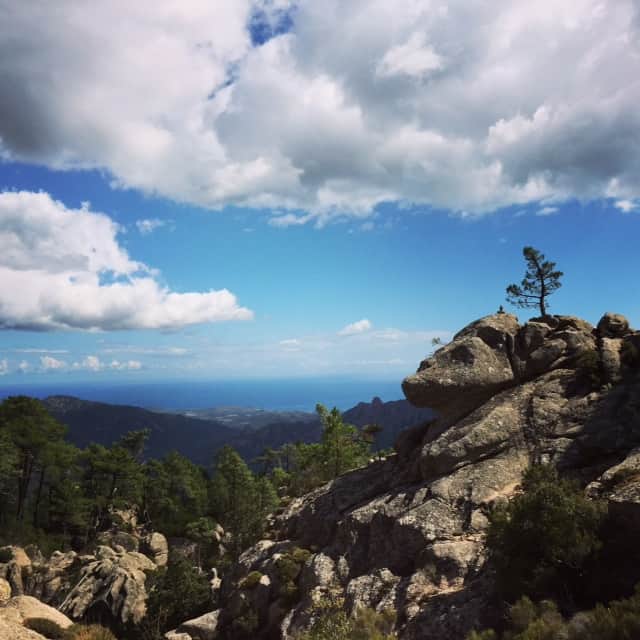 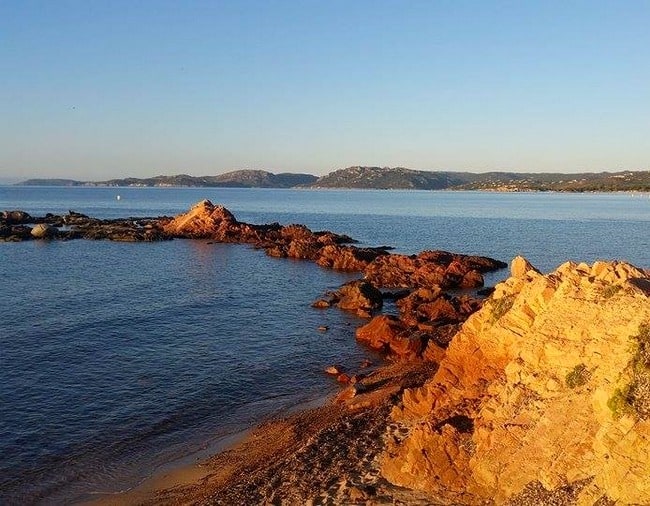 Wowwwwwww! I think beaches are beautiful places and enjoy sitting in the shade reading a book and taking a swim or two, but I’m not a sun bather. After an hour or so at the beach I’m ready to move on. Corsica was no different — I just know I’m not a beach person. I love walking on the beach and discovering things but just lying on the sand? Not my thing. The different beach landscapes in Corsica were all gorgeous and although Tom and I only spent an hour relaxing on the sand, discovering the local beaches was a treat. My brother snapped the pic above just after sunrise, we made our way to at least 5 beaches, and there was no “bad” beach that we saw. 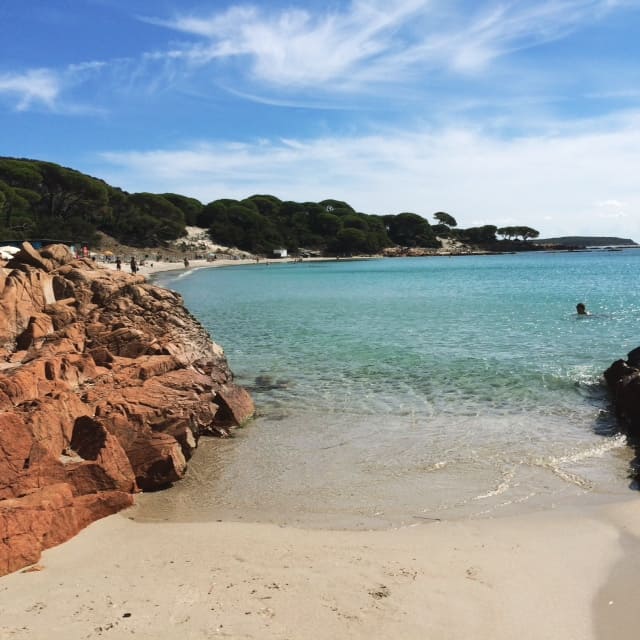 The water was all crystal clear, clean and sparkling.

I don’t have any pictures for you here since all we were allowed to take with us was a wet suit and helmet along with sneakers that we’d wear hiking and in the water, that’s it. This is a pretty hardcore activity and not recommended if you’re scared of heights. I think it’s called canyoneering in the US and it’s something I think I’d only do again if we were in a smaller group.

Our canyoning tour had us up in the mountains exploring the beautiful canyons of Bavella complete with a wet suit and safety helmet. We had to hike to the first canyon and then did a combo of jumps and rappels down “slides” and off cliffs. It was absolutely insane that the guide didn’t give us too much time to process what we were about to do — half because he knew if we thought about it too long we might back out and/or get hurt (more on that below) and half because we were a big group and he had to keep us moving.

Canyoning was no joke. Let me mention here that after our hike to the first “slide” he warned us it would be the most dangerous of all the obstacles we’d encounter that day. He gave us instructions about how to sit and position ourselves on the way down to avoid injury and also gave us an option to be assisted with a rope on the way down instead.

The next thing that happened really freaked us out. Because there were about 20 people in our group, we didn’t see it happen firsthand since we were up top and couldn’t see down below, but apparently a woman in our group didn’t position herself properly and severely injured her back on the way down. She had to be medevaced out of the forest in a helicopter with a severe back injury (she couldn’t walk). Hope she is OK.

So as you can see that changed the whole tone of our canyoning tour pretty much from the start. It was a good experience but could be really dangerous and for that I wouldn’t recommend doing it in a group of more than 10 people max. Really. You need a guide to be completely focused on what you’re doing and in a big group it’s hard to keep track of everyone. My sister-in-law strained her neck, Tom hit his back hard on a rock and I slipped on rocks a few times and had a gnarly bruise on my leg the rest of the trip. Despite all that, we had a blast! 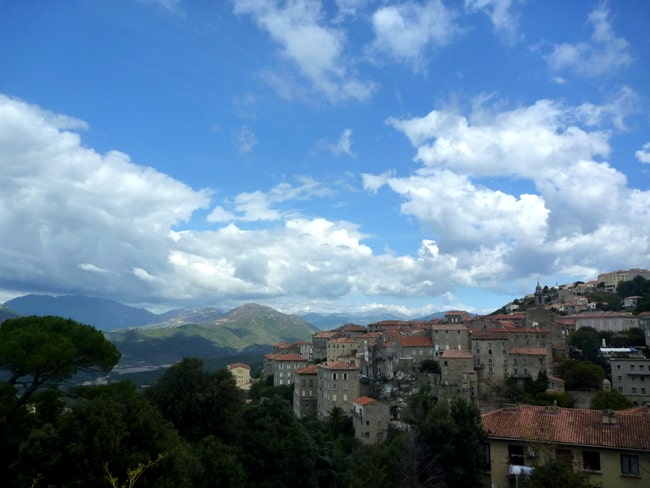 I could write an entire post on each of these towns but will just give you the short version here. We stayed in Porto Vecchio and then took a day trip to Sartène (pictured above) and visited Bonifacio as well. Porto Vecchio is a port town and the third biggest town in terms of population. There’s the old town up overlooking the port and then the port area that’s full of fun restaurants. I even managed to find frozen yogurt here! Bonifacio was probably the most touristy of the three and we spent a half day exploring the shops and the Escalier du Roi d’Aragon (below). We had a lot of fun just walking around and exploring. 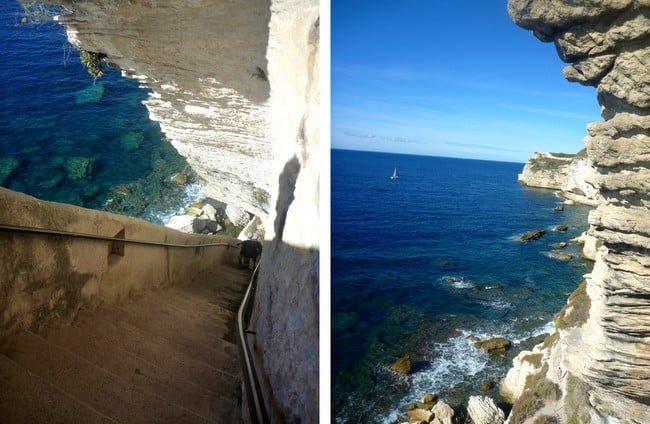 And looking down to the Bonifacio port: 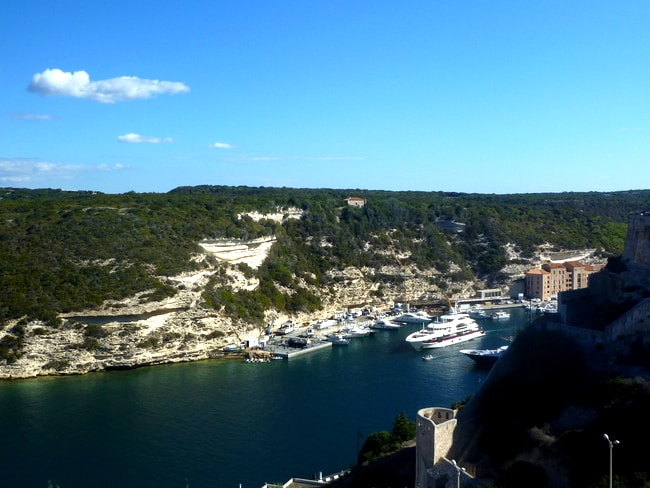 Sartène is a smaller town and known as the “most Corsican of Corsica’s towns.” It has quite a sordid history “steeped in the traditions of superstition and vendetta.” We had time to visit and went on a Sunday, but if you’re short on time, I’d say skip it. It was great for photo ops but I think we ended up enjoying the drive more than the actual town itself. That said, we had some wonderful pizza there for lunch!

Phew, that was longer than I thought it would be, but hope you enjoyed this highlights post. There’s so much more to say about what we did and what it was like but I think I’ll stop there.

Have you ever been to Corsica on vacation? If not, would you go?