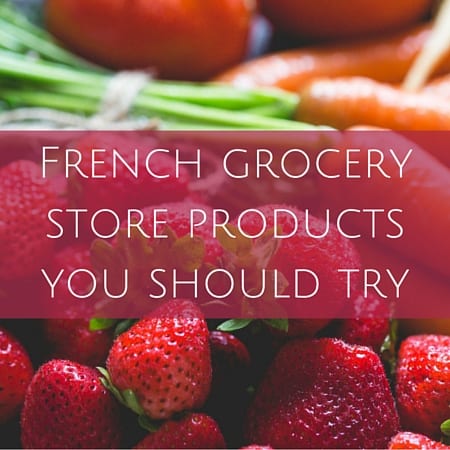 Hi guys, I have one final guest post for you that came in while I was on vacation. It comes from a French woman living in California named Agnès who blogs about her expat life in the Sunshine State. Today, she’s telling us all about French grocery store products she misses from France!

France has a strong reputation regarding food. I often get asked by Americans if I ever had snails or frogs, if I miss cheese, if foie gras is as good as we say. Our French friends wonder how we manage to go by without cheese. The truth is, we knew going abroad would have its “food-cost”. We knew it would be hard to have cheese for example, but we were prepared for it.

However, there are some things I didn’t know would be hard to find. And I didn’t even know I would miss them so much. So here are some of the foods I was really happy to find, and it would be worth trying them if you get a chance! 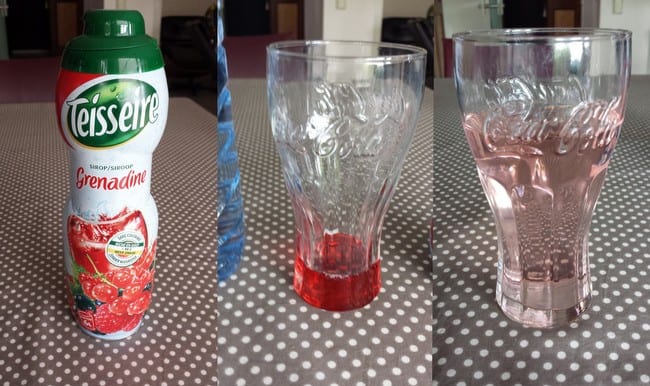 This red fruit syrup is pretty common. In supermarkets, there is usually a big section dedicated to syrup in the water aisle or nearby. Pour a little bit in a glass, add about 6 times more water, and you have a great drink. This is the perfect way to have children drink more in summer. Actually, at some point, a bottle only lasted a week in our house!

If you want to serve a fun cocktail to your kids, pour orange juice, add ice and a little bit of grenadine. It will sink instead of mixing right away, and the kids will have to mix the drinks with their straws. While grenadine is our personal favorite, you can find dozens of different flavors. Strawberry and peppermint are classic, and if you go to a café and want a fresh drink that’s not soda, you could ask for a “diabolo fraise” or a “diabolo menthe”. You’ll get a glass with syrup and a bottle of water. 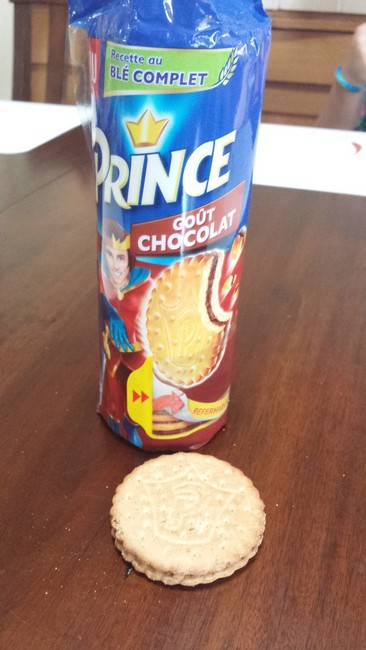 The French tend to eat late, usually around 7-8pm. That’s a long time between lunch and dinner! Kids get out of school around 4pm, and the “goûter” or “4 heures” snack (literally the “4 o’clock“) is an institution. The traditional snack would be a piece of bread with chocolate (and I mean good chocolate, not Hershey) or Nutella. Another really common snack is either a Prince or a BN. Those are two dried cookies joined with a layer of chocolate. Prince is round, BN is square, and the recipe is slightly different. My preference goes to Prince 🙂 Just like with Oreos, everybody has a way to eat their cookie! 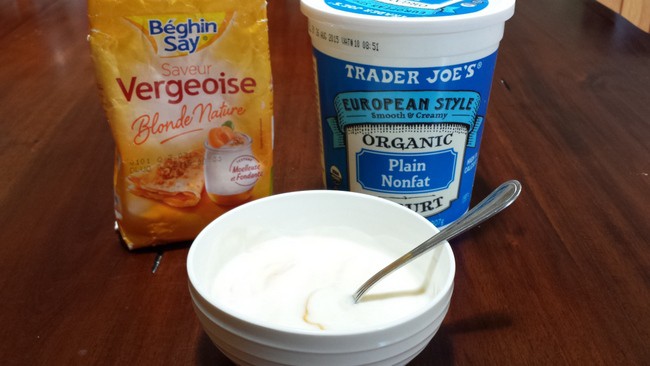 While Americans seem to mostly enjoy sugar coming from sugarcane, this is not the case in France. Most of the sugar comes from sugar beet, grown in North of France. Actually, something labelled “sucre” will come from beets, while sugar issued from sugarcane will have the label “sucre de canne”.
“Vergeoise” is a kind of sugar that has a stronger taste and also comes from sugar beet. It can be either blond or brown, and the darkest is also the most flavorful. I enjoy it on my crêpes or in yoghurt.

Fromage blanc (literally “white cheese”) is a kind of plain smooth cottage cheese. You can find it either in a big container of 500g or 1kg or in small pots of 100g, almost like yoghurt. It can be spread on bread (although that may be a family thing) or eaten with sugar or jam just like yoghurt. But my favorite way to eat it for dessert is with a big spoon of crème de marrons. Saying that it’s a chestnut jam doesn’t give the slightest idea of how good it can be! You’ll just have to try!

Crème de marrons is usually sold in cans rather than jars, so it’s pretty easy to bring on the plane. Anyway, the sweetness of that jam is perfect with the smoothness of fromage blanc. It also works with yoghurt for some of my kids. 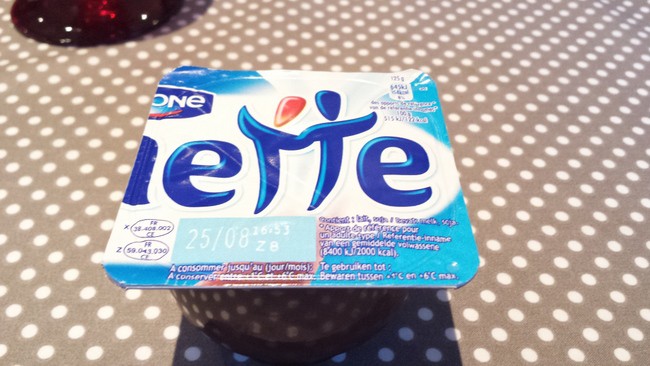 So, since we are mentioning dessert, why not evoke Danette? That brand is the leader in various-flavored cream, and the song in their commercials (ten? twenty?) years ago is still in everybody’s head: “on se lève tous pour danette, danette, danette…” Unsurprisingly, my personal favorite is chocolate, but you could go with vanilla, caramel, coffee, pistachio… This has to be stored in the fridge, so you won’t take it back in the US. 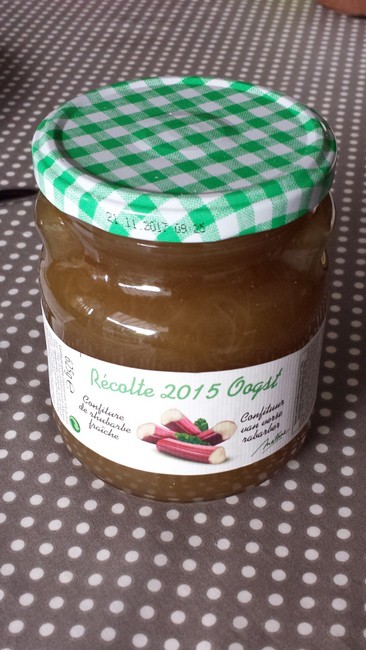 Rhubarb is not the most common fruit, but it’s always been one of my favorites, on pies or as stewed fruit. So it’s not really a surprise that it’s my favorite jam. I just love this sweet-sour taste! Strangely, rhubarb jam has proven rather difficult to find in my area. I managed to get my hands on rhubarb-strawberry that tastes strongly of rhubarb, but the real deal is better, and I brought a couple of jars back from my last trip. 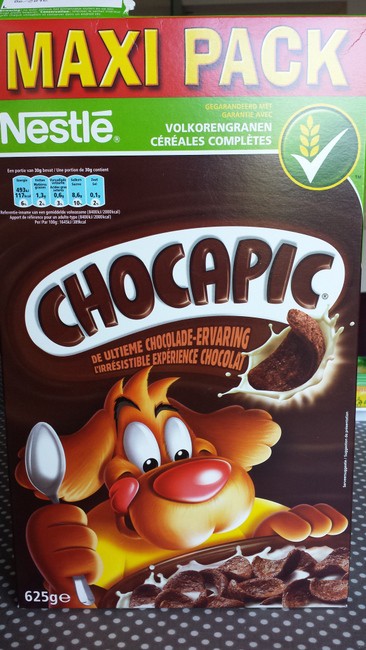 Most of the cereals we buy in France can be found in the States, except for anything chocolate-flavored. We’ve tried just about all of the chocolate cereals but nothing comes close to Chocapic. This kind of looks like a corn flake, the chocolate is inside, not on top of it. This is my kids’ favorite, and it’s been really hard to find a replacement. We request that our visitors from France must arrive with at least two boxes or they’re not allowed to enter the house! 😉 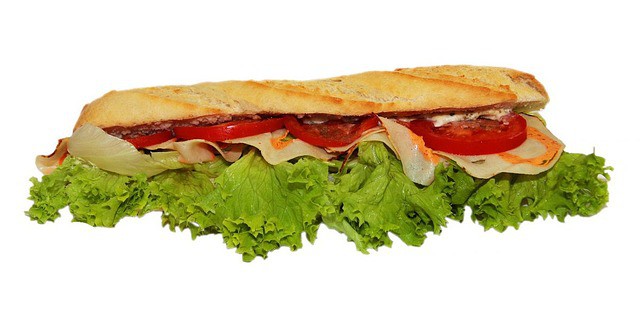 Bread is such a staple for us that I never thought about it. I never realized how hard it would be to arrive in my new home, try to buy bread, only to find it ranging from “disgusting” to “barely ok”. With time, I’ve found that Trader Joe’s half-baked baguette stands out, but it’s pretty expensive compared to bread in France. And still, there is no comparison between that and a true French baguette, with a crunchy crust and a fluffy inside.

Another thing that’s hard to find is ham. Strangely, while French supermarkets usually have an aisle dedicated to ham, with one kind of bacon on the side, American stores have an entire aisle dedicated to bacon with only one kind of ham 😉 (Diane’s note: You have to go to the deli counter for ham!) Anyway, the go-to sandwich for French families is not PB&jam, it’s baguette, butter, and ham. And for the full experience, I would suggest visiting the local butcher, who will probably be able to make slices out of a fresh ham for you. You may even have a few to choose from. You’ll see, it’s pretty delicious. (Note: That’s not Agnes’ pic and was the closest thing I could find that looked like jambon/beurre.) 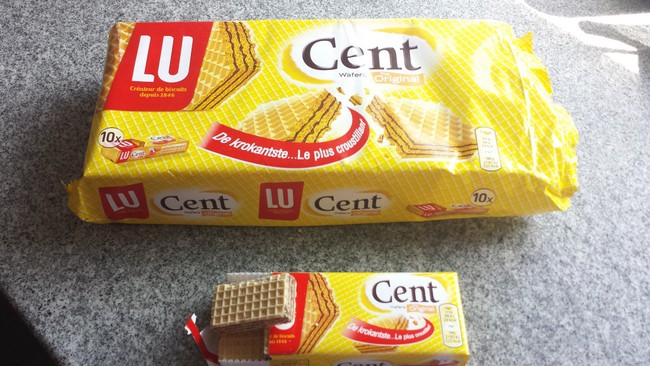 These wafers are stored in the same aisle as cookies and biscuits, but I never found them in France, only in Belgium. Many other brands offer similar products, but these are the best by far.

I hope this glimpse of what I enjoy will inspire you next time you’re in a French grocery store!

Pics of the month November: Wine and regional products exhibition