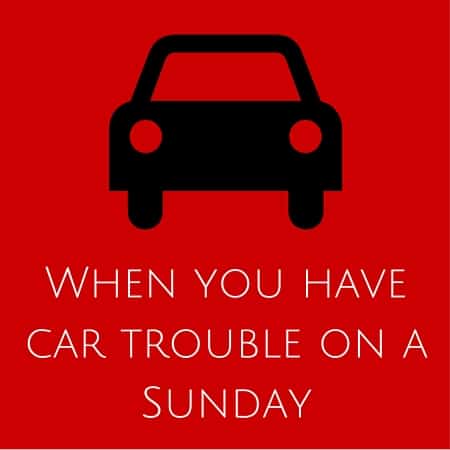 I didn’t think I’d be writing this post for you today!

We were down in Perpignan for a work-related event and left the rental house yesterday at 11 am to make the 7-hour trek home. An hour into our drive on the autoroute about 65 km south of Toulouse, we heard a bang and the dashboard lights lit up like a Christmas tree. Tom checked to make sure he still had control of the steering and brakes (we did) and we quickly deduced our tires weren’t to blame. What followed was a 5-hr detour (and then 6 more hours to get home) that involved a tow truck, garage, taxi ride, broken wine bottle, rental car and more. We got home in one piece after midnight — but let me tell you, having car trouble on a Sunday in France is something you never want to experience.

Want the full story? Read on!

Before yesterday, the worst thing that’s ever happened to me on a road trip was when I ran out of snacks. Guess I should consider myself fortunate! Anyway, we’re home safe and sound, so although this was a pain in the cul, I’m not seriously upset. These things happen and I found myself laughing because of the ridiculousness of it all. Maybe I’ll stop laughing when I get the car repair bill. I don’t have any pics for you because in the craziness of our day, taking photos just wasn’t on the priority list but I do have a pic of the broken hose. 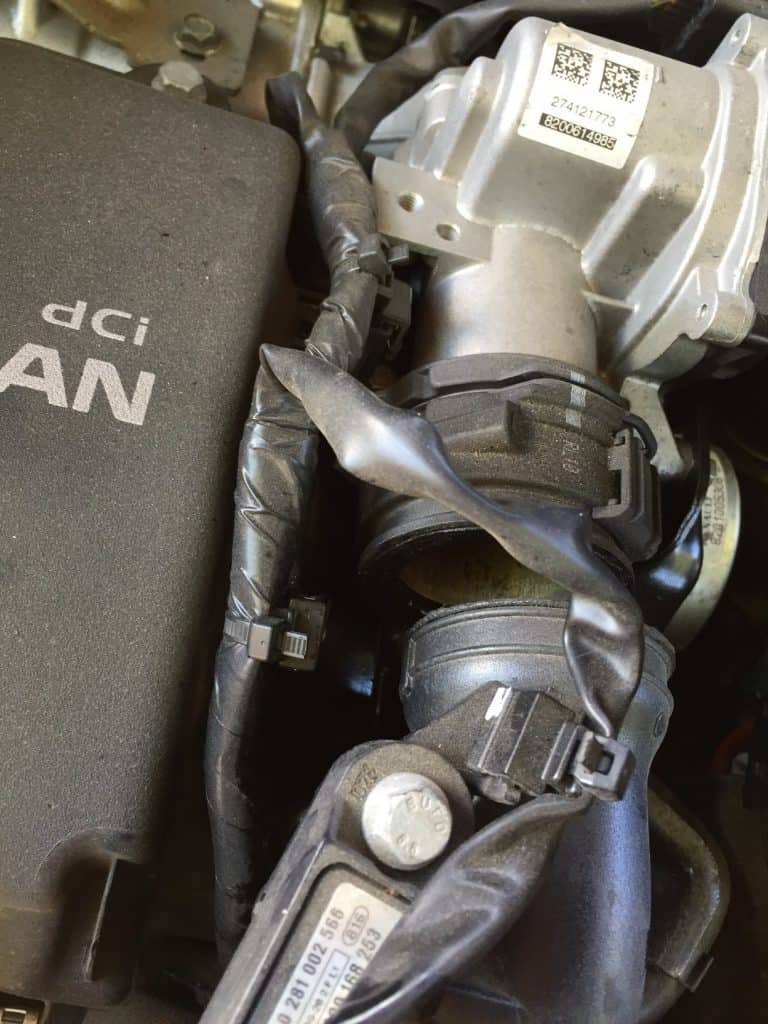 I wholeheartedly believe that the only simple thing to do in France is to buy a baguette. The number of phone calls thus far has been ridiculous and we still don’t have answers — no clue how much the repair will cost, where it will be done or when. So my advice? Don’t have car trouble on a Sunday. 😉

So let’s get this party started…

We bought a new Nissan Juke a little over 3 years ago and we love it. But like every car, nothing is infallible and yesterday just wasn’t our day. I’m not going to bash Nissan because if it wasn’t this, it would be something else. I just wish this happened closer to home.

We were 6-ish hours from home and the noise we heard was actually a radiator hose breaking, which we learned when I called a friend from the gym. Her husband is a mechanic and has his own tow truck company up where we live and he went through diagnostics on the phone. In a matter of minutes, he was able to help two car dummies uncover our radiator hose issue (which he knew all about because he’s had to tow a bunch of Nissans for the same issue). It broke clean off and apparently this is a known defect in Nissans and Renaults (they have the same engines). Despite it being a cheapish part and easy repair that would have had us on our merry way, our little issue turned into a nightmare because there was no way we could get this part on a Sunday. And it gets worse. I’ll get to that. Our only option was to get our car towed to a local garage because there was nothing we could do in the rest stop parking lot. 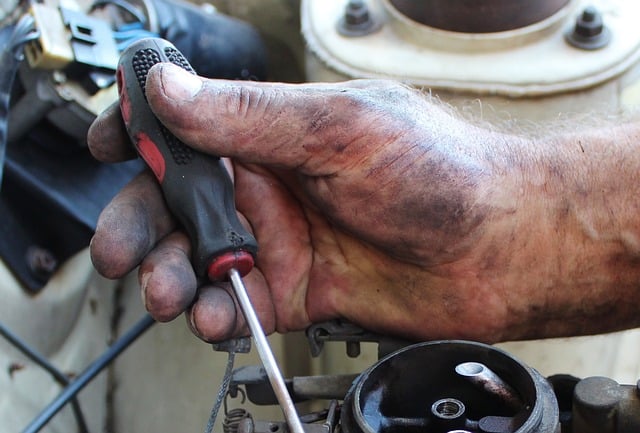 Driving our own car home was not an option — and as I write this, our car is still a 7-hour drive away.

So here we are, thanking our lucky stars it’s not raining and that Dagny is one of the coolest dogs around. She delighted in riding in the big tow truck to the garage and getting her ears rubbed by everyone we came into contact with. Everything took a while because our little Juke decided to blow the hose about 65 km south of Toulouse and not just on the outskirts of the city, so we were really in the middle of nowhere.

The only garage on call Sunday was 20 minutes in the wrong direction of our travels.

But what could we do? 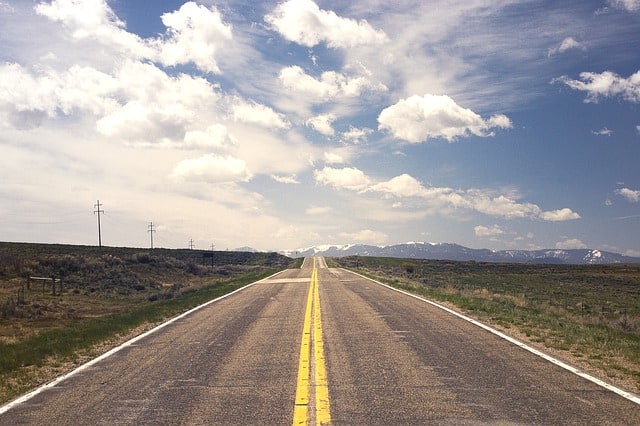 After speaking with our insurance, we were told we’d be given a rental car for 24 hours to get us home and would then be given one train ticket for Tom to go back down to where the car is to pick it up and drive it up once the repair is done. So to get this rental car, we had to have a taxi bring us from the garage we were at to the car rental agency. I figured there was a rental agency nearby but nope.  This agency was 45 minutes into the mountains on tiny, windy roads and owned by two of the most unfriendly people we’ve ever met. Because it was a Sunday, nothing is open so they are “on call” and only open up for people like us. We could tell we really inconvenienced the owner by having car trouble.

Upon arriving in the Avis parking lot, the taxi driver helped us unload our bags but smashed a bottle of wine by accident. It fell out of the box as he lifted it out of the trunk. So of course when the owner of the rental agency pulled our rental car out to the front, he did his best to avoid the glass. Did he avoid the glass? Still can’t be sure.

About 45 minutes later, we were on our way in a Fiat 500. Now 45 minutes even further from the autoroute, we started our drive and 20 minutes in I noticed the tire pressure light was on. Damn.

The roads were narrow and rural and I started panicking that we had a shard of glass in our tire from the broken wine bottle.

We continued on and finally made it to the autoroute just in time to see that we were now 80 km south of Toulouse and were even further from home than where we broke down. At this point is was 4pm and we needed to get moving so we did. At a rest stop, we put air in the tires but the alert on the dashboard stayed on. A Fiat bug? No clue but we made it home fine.

So here’s where the story gets really sucky. This part we need to repair our car is relatively cheap and easy to install. The problem is that it is in high demand throughout France because we’re not the only ones this has happened to. The rental agency said we were the fourth Juke she’s seen this week with the same issue! Mechanics don’t have replacements, nor do the dealers and you can’t order one. Except it’ll be a minimum of 3 weeks. And guess who doesn’t give you a free rental car in the meantime? Not the insurance and not Nissan. It’s also been extremely tiring trying to arrange for the repair and trying to figure out how much it’ll cost. We’ve made at least 20 phone calls (no joke) and still have no idea how this story will end.

Let’s see what happens… glad we live in our city’s center and are used to walking places!

Our Easter Sunday in France

5 Things that still give me trouble in French