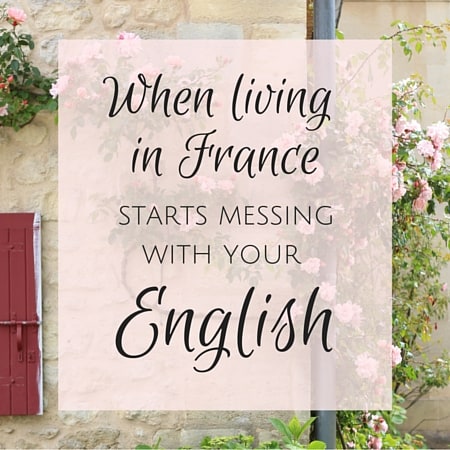 If you’re anything like me, after living in a country where English isn’t the native language, you’ll start to a notice a phenomenon that I like to call “WTF is going on!?” You’ll notice yourself searching for words that were once at the tip of your tongue, second-guessing your spelling and experiencing somewhat frequent brain farts.

Challenging your brain by learning a second language is hard work. When you start using that second language more and hear it around you all the time, you may realize that funny things start happening to your native tongue.

Or maybe that’s just me?

To give you some background, I used to pride myself on excellent spelling. Words and letters were my thing, and growing up, classmates considered me the dictionary stand-in if one wasn’t available. When my 5th grade teacher told me to check the word “weird” in the dictionary to make sure it was spelled right (it was), I told her I didn’t need to and that I was 100% sure it was E before I. Words were my thing. I learned to read at a young age and even won my 4th grade spelling bee.

But now? Well, now I doubt myself and double check if I’m unsure of how to spell a word (that used to be a no-brainer). I’m slipping!

So about these brain farts. First, let me point out that my little brain farts in English aren’t because of my wonderful, majestic, perfect French. I wish that were the case! Nope, my French isn’t perfect by a long shot and I speak English a lot in my daily life with Tom and people back home. So it’s not because my brain is forgetting English or just tired after speaking French all day.

And on that note, even if you do speak French all day, you’re not going to forget English or start talking with an accent or anything like that. Our brains are very good at keeping the two languages separate… well, most of the time. 😉

I think this stuff is all normal for anyone who’s learning a second language — and even more so when you live in a country where that language is spoken. Little things will creep into your native tongue — nothing serious — so let’s have fun with this! 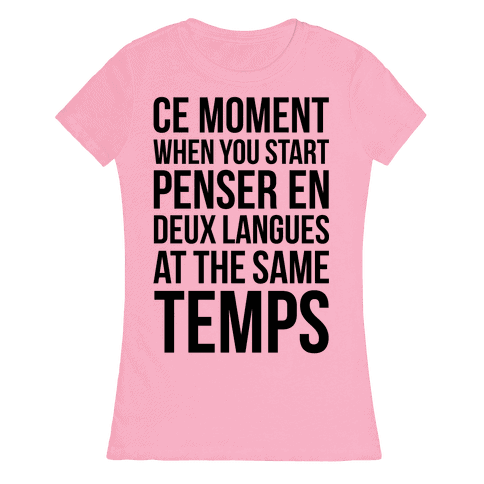 Here’s how living in France has started to mess with my English:

You sometimes wonder how you say a particular word in English because you’ve used it more in French than in your native tongue.

What words am I talking about? For me personally, reportage. Environs. And the Leo DiCaprio movie The Revenant (there’s also a really good French show called Les Revenants). As dumb as it may sound, I wasn’t sure how to say revenant in English until I heard an interview with Leo and he confirmed it’s REV-uh-nint in English. In French, the only language I’ve ever said the word out loud, it’s more or less said like ruh-vuh-nah (equal stress).

You’ll blurt out the French word in the middle of an English sentence because it came to you quicker.

Franglish ain’t too jolie! When you can’t think of a word in English, just go with the French one. This works best when you’re speaking with someone who speaks both languages. Tom often says the English words make more sense than the French ones sometimes and it’s way easier to say “care” in English than look for a roundabout way to say the same thing in French. There’s no direct translation of “care” in French.

You’ll say something like “Explain me” before quickly coughing to divert attention and correcting yourself.

In French, explain to me is just explique-moi (and not literally explain TO me) so when you’re not paying attention, you might opt for the French construction in English.

Will you be fluent after living in France for a year? >>

You’ll search for words in your native tongue for what seems like an eternity.

“Yea we have to get one of those, you know, that uh, THING. We need one of those, crap what is it called, that THING!” You know what I mean,

Instead of saying “what,” you’ve been known to say “Quoi” just as easily. Or instead of yes, you say “oui.” And vice versa. Happens more when you’re tired.  Sometimes I’ll just say “yes” instead of oui or “hi” instead of bonjour. Sometimes the more trendy and hip French people say “yes” on purpose to sound cool.

One time when I was on vacation in the US, we were at Target and I went up to an employee and started my sentence in French before quickly starting again and trying to act cool. Also a few years ago I was sleeping over at my in-laws and upon waking, I went up to my mother-in-law and said a whole sentence in English not even realizing it. Her blank stare clued me in (she doesn’t speak any English). Woopsey.

French people make weird noises. Really! They make these little linguistic tics that sound weird to the American ear. And no, I’m not talking about the French “r” sound, but actual noises. As time has gone on, I’ve naturally incorporated a few of them here and there. I particularly like the “raspberry” noise. I wrote a whole post on these strange French sounds so be sure to read it!

The French apartment is spelled appartement. Or exercise/exercice.

You’ll make grocery lists in one language and realize a word or two in the other language has made its way onto your list.

When writing emails in English, you might be a little over formal or polite.

That’s not necessarily a bad thing. The tone of professional French correspondence is overly formal and polite, in my opinion. You’ll be addressed by your last name, and phrases that sound totally bogus in English are the norm in French (Like in a cover letter: Veuillez agréer, Mr. X, l’expression de mes sentiments distingués.)

A few times I noticed that my emails in English are a little too “French” and I’ve had to scale back and remove the “Thanks for your reply. I’ll be awaiting your response. Have a good weekend! Cordially, Diane.” OK, I didn’t actually write all that, just an example, but in French, emails do take on a similar tone and it’s just not natural in English!

Because I read a lot of blogs written by people all over the world, my dialect of English has gotten a bit fuzzier as I expand my horizons. Back in New York City, I was surrounded by Americans who pretty much spoke and wrote like me. Now after connecting with people from all over, I’ve heard and read so many different accents and variations. I notice I’ll second-guess myself when writing and here’s a quick example. It’s most natural for me to say something like “that’s different than what I’m used to” but I know many UK dialects of English would say “different to.” Or writing enrol or realise (which used to look wrong to me) instead of enroll or realize.

What about you? Have you caught yourself messing up in your native language? Talk to me in the comments.

P.S. Pop your email in the new newsletter signup box below this post to stay in the know about all things Oui In France. I plan on doing a newsletter about once a month, so hope to see you in your inbox!

P.P.S. If you’re interested in learning a language, I highly recommend the online learning company Lingoda and did a full review here. All classes are taught by native speakers and you can test it out for only $1!

« Quirks you notice about your French husband
Healthy brands in France: Natsu Foods »