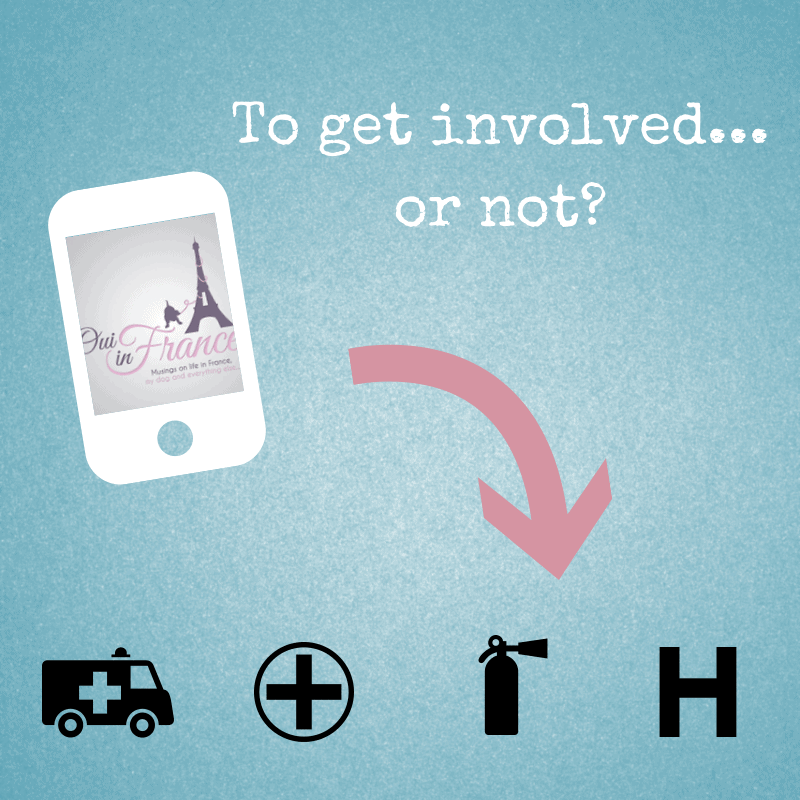 I’m calling a timeout on all things France today and shifting gears, OK? An article about a woman named Ada who was almost abducted on a Sydney, Australia, street in broad daylight recently caught my eye and made me wonder how I’d react if I had been there. The alleged abduction attempt took place in a busy area with people all around and yet bystanders did nothing at all to help her.

What gives? Would you get involved in a situation like this?

We all like to see the best in others and hope that in a time of need, even a stranger would come to our rescue. Especially when the situation is dire. But is that always the case? Sadly, no. (Update: Since the original story came to light, the woman apparently has been charged with fabricating the whole abduction attempt. Yet the conversation is still important to have…)

I used to watch What Would You Do?, a reality TV show hosted by John Quinones that set up often uncomfortable situations complete with a hidden camera to test what the unsuspecting public would do when faced with blatant racism, criminal activity, domestic abuse and more. Basically, what would you do when you think no one is watching? Common scenarios would involve things like walking through a park and discovering kids spray painting a car that’s not their own, a parent getting too rough with a child or even a shop owner making derogatory comments toward someone of a certain race. Would people intervene and stand up for what they think is right? Would they help the victim or walk right on by? Just gawk? As it turns out, there was a little bit of everything.

For me, not getting involved comes down to 4 things:

1) Fear of being wrong. Maybe you’re scared of misreading a situation and dealing with the embarrassment that comes with that. If something looks bad, is it really? Is it your job to find out? If you call the police and there’s really nothing wrong, you might feel embarrassed. But the way I look at this is if you think you’re seeing abuse (or something else that isn’t right) and you call the cops and are wrong, then you temporarily risk feeling embarrassed or foolish for about five seconds. If you do nothing and someone gets seriously injured or worse, can you live with the fact that you did nothing? If it’s a minor situation that doesn’t warrant a call to the police, ask a neutral question like “Is everything OK?” or “What’s going on?” and then see if the responses require further action on your part.

2) Fear of getting hurt yourself if it involves a crime. There are ways to intervene anonymously if your safety is a factor. Get to a safe place and make the emergency phone call. That call could make a world of difference.The fearless and self-righteous Diane from her college days wouldn’t hesitate at ringing the doorbell of a neighbor clearly engaged in a domestic dispute, but now? I’d absolutely make the phone call to keep out of harm’s way while still trying to help.

3) Bystander effect. In a crowd, it’s easy to assume that someone else will do something and the responsibility is off your shoulders. It makes sense — surely with all the people around, someone will take action and help. But maybe one day that someone needs to be you.

4) Just not caring. Too busy. Scared to get involved. Sometimes we think it’s not our place and not our problem. Depending on the situation, inaction might be the best action to take. But in more cases than not, if something doesn’t look right, it probably isn’t.

So let me ask you, if you’ve ever been in a situation that didn’t sit right with you, did you get involved? Why or why not?

I believe that it’s our duty as members of the human race to help others.

Whether they deserve it or not, whether you know them or not and whether it’s an inconvenience to you or not, our true character is revealed when we reach our hand out to someone who can do nothing for us in return. Don’t we have an obligation to look out for each other? Even if the situation is not as serious as needing to call the police, if someone needs your help, why not give it?

Let your intuition provide that push you need to take action. Our intuition is correct 99 percent of the time and all you have to do is listen to it. That little voice that tells you to NOT get on the elevator with someone who is giving you a bad feeling. That feeling in the pit of your stomach that says do NOT open your car door and get out. And the surge of adrenaline that has your intuition screaming DO SOMETHING when you clearly see something isn’t right.

But will we listen to that intuition or just keep on walking? I say listen.

Are you on the right path?

When you find something that isn’t yours

Ever been told to smile? Not in France