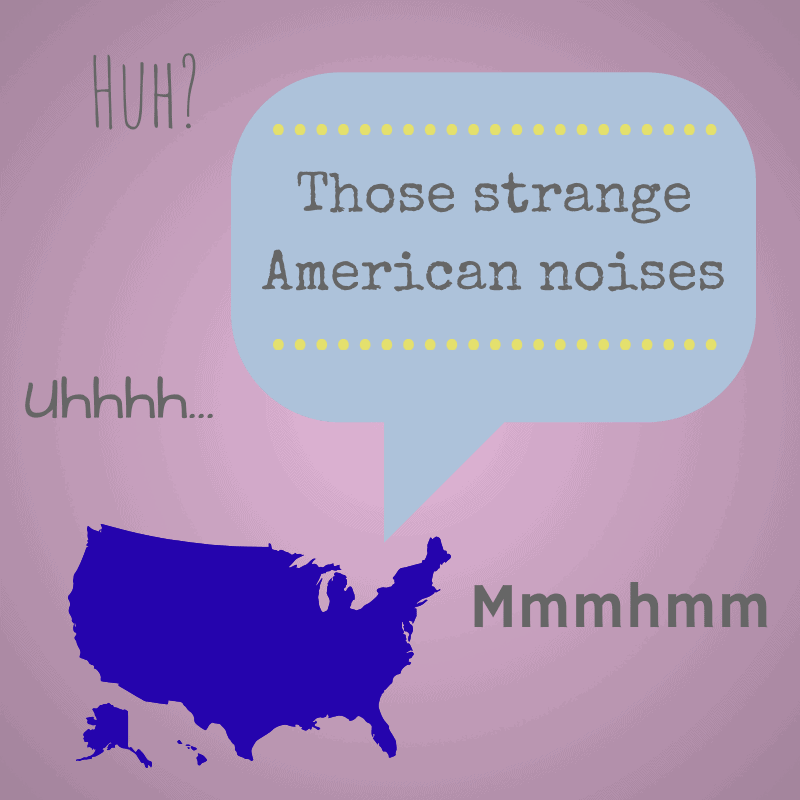 So read on for the strange noises Americans make…

If you’re American, these sounds are familiar to you, but for foreigners who live in the USA or have traveled there, the sounds might have surprised you especially in the beginning. Some of these might hold true for other dialects of English too. Some of the noises are actually words but I assure you they’re 100 percent authentic American. Also, please note this is just a jumping off point and all the sounds and uses for each sound are not mentioned. (Thanks to Tom for helping me with the audio!)

What it means: This is a noise used to confirm that you’re listening to the speaker or that you agree. It’s used commonly on the phone too. It means,  “Yes, I hear you.” It can sometimes mean I’m bored and you’re going on and on if the “uh-huhs” are in succession. Can also mean yes in response to a simple question that doesn’t really require much of a response as in the second example.

What it means: This one is in place of “You’re welcome” and is commonly used for a little favor where an informal “no problem” would also work such as when you hold the door open for someone or someone says thanks after you pass the bread at the dinner table. A “you’re welcome” would work in this situation too but when it’s a very small favor, you’ll hear Americans respond with this noise. This does NOT exist in French and my husband laughs every time he hears it. I had no idea it wasn’t a universal noise until Tom called me out on it with a, “What the heck is THAT??? You think my noises are weird????”

What it means: It means I have absolutely no idea. This filler is also used when the person is trying to figure out what to say next. This one can buy the speaker a few seconds of time in the case of confusion or surprise as well if a question catches you off guard. “Uhhm” can be used to mean I don’t know or just a filler as in, “He arrived at, uhhm, 2 p.m.”

What it means: This is a less formal way to say you didn’t hear something. A “What?” also works. This is commonly used either when you don’t hear or understand someone the first time. It can also be a response to something that has totally confused you. It’s similar to the French “Hein?”

What it means: The short hmm is a filler noise that can be used in a variety of situations to usually mean you’re thinking something over or are stumped.

What it means: This can be used in a variety of situations. It can mean: Wow, I don’t know what to say/that’s weird/don’t want to offend you so I’m buying time by trying to think of what to say next. It can also be a filler in response to a thought-provoking question.

What it means: This one is universal in a lot of languages and just means alright/yes/I get it. It’s the same as the French OK just with a slightly different pronunciation. OK can also be drawn out to more of an Ohhhh-kaaay as more of a transition to mean we’re moving on to something else. In French, I can’t say I’ve ever heard this usage.

What it means: This noun is a funny word that is a substitute for the name of something you’ve forgotten or is not known. It’s informal and is often used when the name of the thing is on the tip of your tongue but you just can’t think of it.

What would you add to the list of strange noises Americans make?

Oui In France was on French radio

« Does France have a census? French census time and a level of formality
To get involved or not get involved »