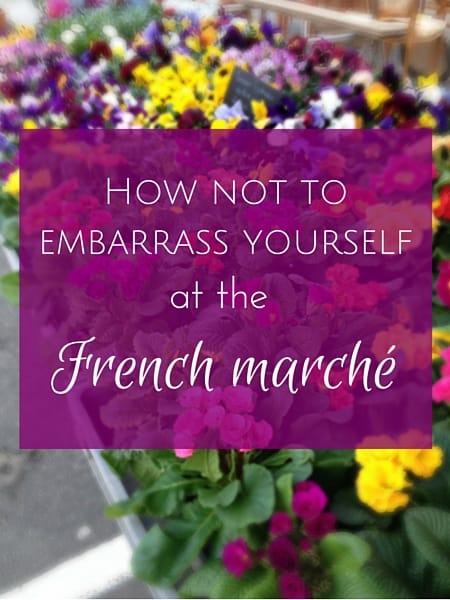 As foreigners, we sometimes embarrass ourselves and if you’re me, that happens more than you’d like to admit. Sometimes it’s a cultural faux pas and other times it’s in the language, but today, I’m putting a stop to that — at least at the French marché. So if you’re visiting France for the first time and want to browse your local market or have just moved and don’t have a clue, read on for my tips on how to be prepared at the French marché.

Tips for the French farmers’ market

The marché is the French version of a farmers’ market and THE place to stock up on produce, eggs, cheese, bread and more. Depending on where you live, the marché might be a winding maze of bustling stalls or laid back and small. If your market is on the large side and chaotic, don’t stress!

My beginner tips below on how to survive the French marché (find one nearby here) will have you feeling like a pro in no time:

Don’t forget your bag or basket.

French vendors rarely give you a bag and if they do, it’s a little flimsy plastic thing that might break anyway. Always bring your reusable grocery store bags or granny shopping cart. And if you want to feel extra authentic, buy yourself a wicker basket for all your fresh produce.

Do a quick loop before you buy.

Many vendors sell the same items which means prices and quality vary. Do a little tour of the marché before you buy to see whose melons look the freshest and whose prices are the most competitive. 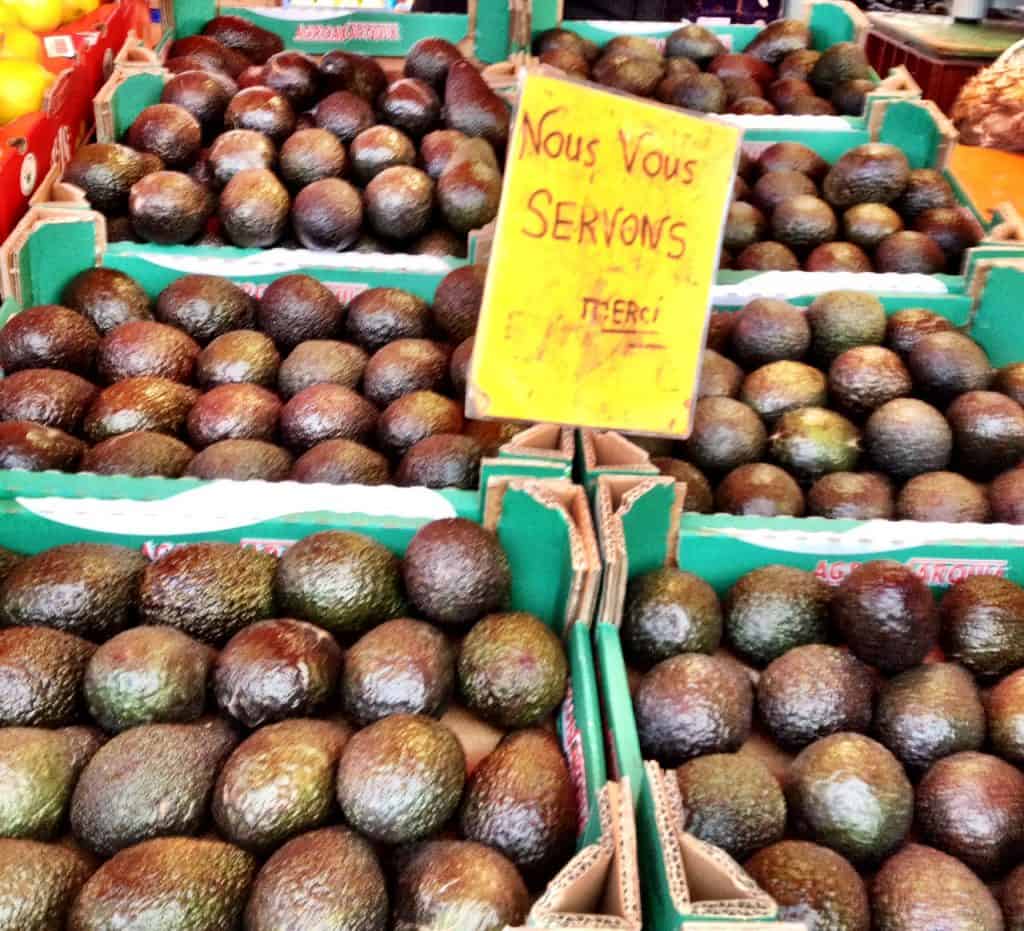 Unless you know it’s absolutely OK to touch the produce and select it yourself (seeing others do it does not mean it’s OK), let the vendor pick up the actual fruit for you. You can usually select which butternut squash you want (or other large veggies), but just point. Sometimes you’ll even see a sign that says “We’re happy to serve you” meaning please keep your paws off our produce!

Arrive early just after the marché opens to beat the crowds (read: less chance to embarrass yourself in front of others). Within an hour of the marché opening should be fine. You’ll also get the best selection, not to mention it’s easier to be understood when you don’t have to yell over the din of the other people talking around you. Which brings me to…

If you have an accent and are used to speaking quietly, make sure you really speak up so the vendor can hear what you’re ordering. Be confident when you speak and project. There’s nothing worse than being asked to repeat yourself several times as the 10 French people around you turn to see where the voice is coming from. Just speak up the first time! 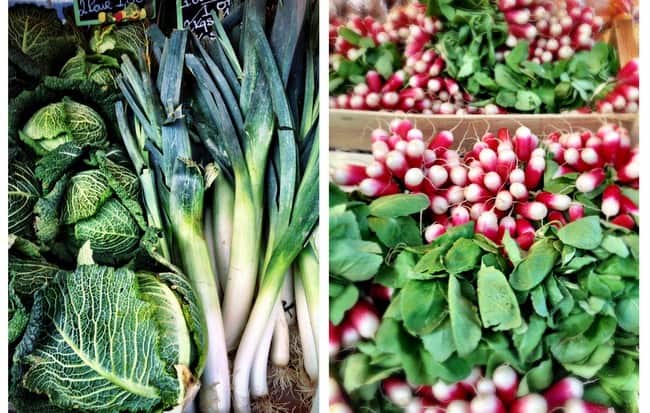 Check the dictionary before you go.

Make sure you know all the vocabulary for the seasonal produce you’re looking to buy. And run the pronunciation by a French person if you can. That’ll save you the embarrassment of mispronouncing a word beyond comprehension.

Don’t stress about the line situation.

The French aren’t masters at making lines and at the marché, this goes double. There will always be that little old lady that arrived after you that will be pushy and get served before you. Let her do it. What you should do is try to get in line (ha) or gather ’round in an orderly way and then catch the attention of the vendor. Even if you think you’re in line, the guy behind you might think you’re not and cut you. So make yourself seen and be a little aggressive if you have to (if you hate lines, see above about arriving early to avoid this entirely). 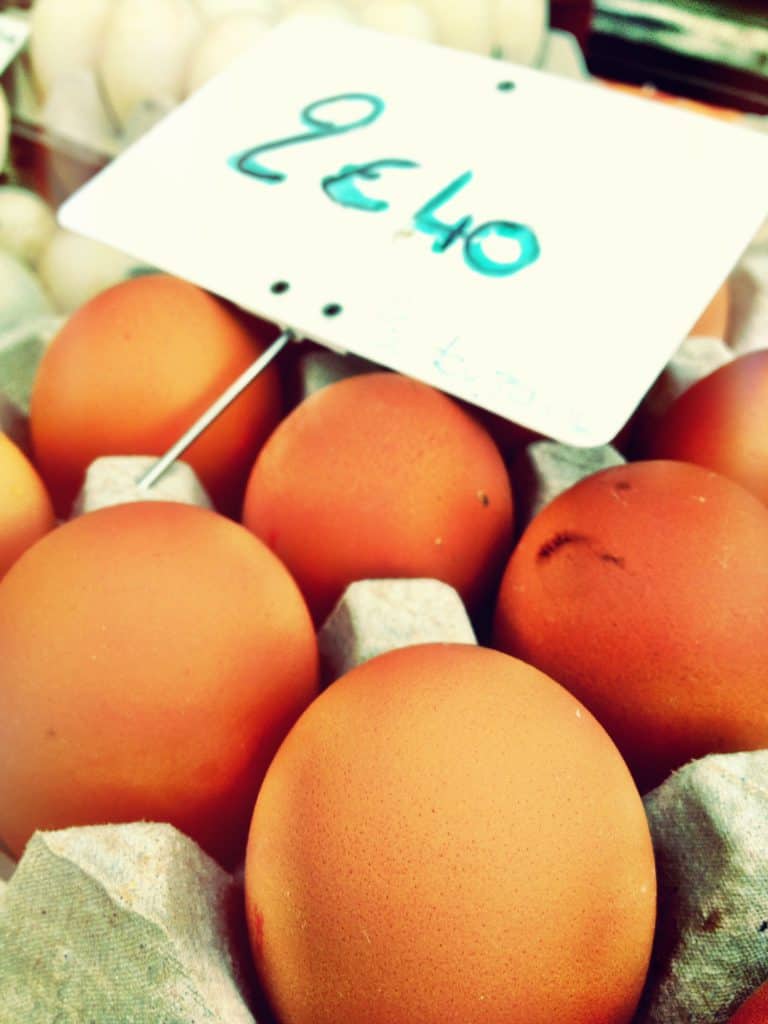 Be prepared for the “Avec ceci?” question

The first time I visited France, I had no clue what this meant — they didn’t teach us this in school! — and looked stumped in front of a line full of people. After a few repetitions (and me thinking she was talking about someone named Stacy), the exasperated cashier just gave up and figured I had all I needed. So folks, you’re a step ahead here if you’re prepared for this question. After you’ve told the vendor you’d like your kilo of tomatoes, he or she is most likely going to ask if you’d like anything else. That question usually takes the form of “Avec ceci?” If you’d like something else, go ahead and ask for it now. If not, you can say “Ca sera tout, merci” (that’ll be all, thanks).

Nothing will give you away as a foreigner more than forgetting your manners, but I know sometimes when we’re nervous or thinking about a bunch of things, the manners go out the window. The French are some of the most polite people I’ve ever encountered so always start off with a Bonjour and end with a s’il vous plait and merci. The marché is no exception. And tack on a bonne journée au revoir at the end before leaving for good measure. Also, a smile never hurt anyone! 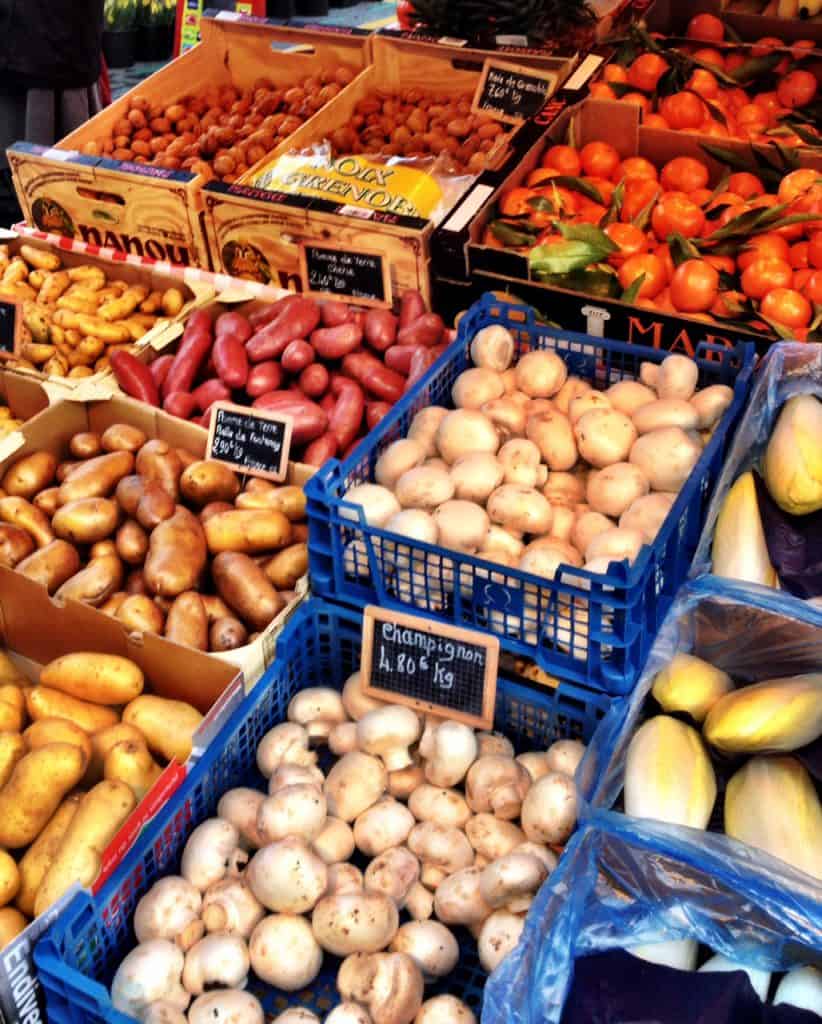 Don’t ask for something not in season.

The French marchés and grocery stores don’t import produce from all over the world in the off-season just so it’s available to the consumer. So if you don’t see something, it most likely means they don’t have it. That means don’t ask for strawberries or cherries in January, OK? The French are experts at making do with what’s in season. And Mother Nature thanks them.

So there you go, you’re ready for the French marché! Enjoy! 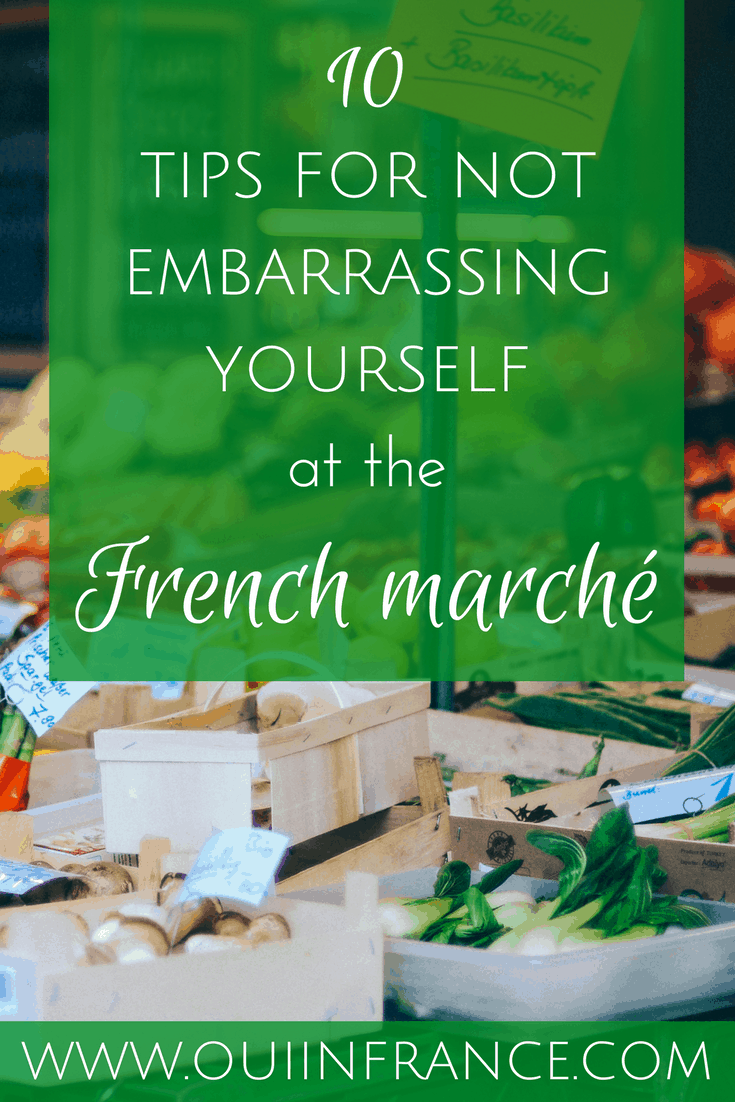 A Friday trip to the farmers’ market

A peek at a French marche

« French accent in English: They sound great unless you say one of these words
France subscription boxes: Les Nouveaux Fromagers »