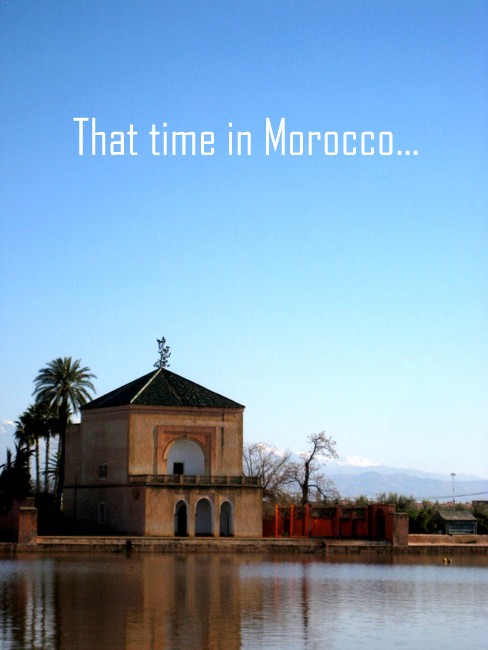 Today’s a good day for a story…

The only time I’ve been to Africa was when I went to Morocco in early 2010 with another English teaching assistant. We stayed in a riad in Marrakesh, drank our body weight in mint tea, stocked up on souvenirs from the souks and thoroughly enjoyed our trip. But one night something really scary woke us up. I was convinced a wild animal got loose in the courtyard of our riad and was going to eat us. Clearly that didn’t happen since I’m here telling you this story, but what a story it was…

Read on to hear about the time a wild animal got loose in our riad in Morocco (or so I thought)!

In retrospect, it was all kind of silly, but in the moment this was all very frightening.  Let’s start from the beginning.

First, let me explain the layout of where we stayed. It was a riad in Morocco — Marrakesh to be exact — with seven guest rooms (forgive my pics from back in the day). If you’re not familiar with riads, basically the rooms are centered around an interior courtyard that is open to the sky (sort of like an atrium), but not in the winter. They have a protective cover over the top of the riad to keep the courtyard dry in case of rain. Here’s a pic of the courtyard and the rooms overlooking it: 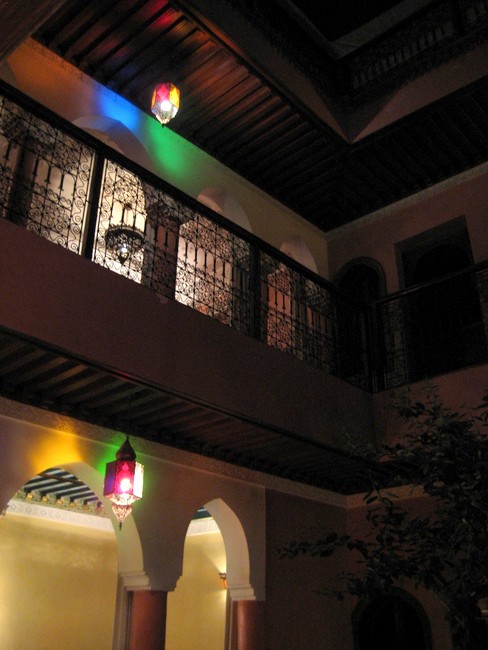 It’s also a very quiet and peaceful kind of place. If someone was watching TV in another room, you’d be able to hear it. Also, the only windows in the room are windows that overlook this central area (windows open to the inside only) along with the door. Here’s the view from our room looking down into the courtyard: 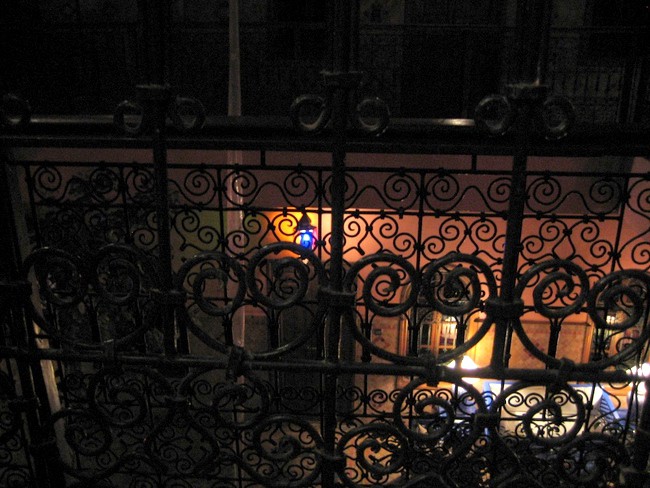 One evening my friend and I went to sleep just to be woken up at 3 a.m. by some very strange sounds. It sounded like an animal or a person was somewhere outside our door thrashing around and hitting the wall. It was a thumping/running/wooshing/pounding type of noise. Very hard to explain and we couldn’t pinpoint exactly where it was coming from. We also heard a banging and swooshing, like this “thing” was bumping into the walls and furniture and causing mass destruction somewhere below.

So, now it’s 3:15 a.m., we’re wide awake and knew these sounds weren’t coming from another guest moving around in their room or partying down below. It also sounded very close and was violent and deliberate. My friend and I whispered about what we thought it could be — not wanting the “thing” to hear us — and kept our windows that overlooked the courtyard and doors shut while we tried to figure this out. Opening the windows to look around would definitely draw attention to us because they creaked rather noisily. So we sat there on the bed unable to think because the loud banging and swooshing kept interrupting our thoughts.

Logically, we knew it wasn’t a ghost although the thought did cross my mind.

After two hours of hearing this nonsense at varying intensities and being legitimately scared, we realized it wasn’t a person either. If it was a crazy serial killer or someone in trouble, we would have heard a struggle or the sounds of someone’s voice. Maybe some muffled screams or someone trying to say something. Even with duct tape over your mouth, you can make some noise. We didn’t hear any of that… (Yes, I watch a lot of Criminal Minds.)

After some further speculation, we thought maybe it was the wind causing the plastic cover on the roof to make noise. We ruled that out because the noise was so deliberate and we heard the clicking of an animal’s nails, or so we thought, on the floor and the sound of something running. The noise wasn’t constant but rather intermittent. So after we ruled out the possibility of wind, we deduced that we were hearing an animal. We weren’t sure if something fell onto the plastic cover such as a large bird with a hurt wing or if we were hearing something actually in the courtyard downstairs from where we were. We kept on listening and determined it was for sure an animal caught in some plastic that was getting increasingly agitated and running into stuff downstairs.

Now you have to remember, we’re deliriously tired after a long day of traveling and seriously concerned at this point. It’s the middle of the night, and we have no clue what is going on.

We don’t have a phone in the room, my cell phone didn’t work in Morocco, and no other guests seemed to be awake or hearing any of this.

I wasn’t going to venture outside my room to go investigate. Where is the staff??

At this point, I decided to be brave and crack our room’s window to peer down into the courtyard in hopes of getting some answers. I figured hell, today is as good a day as any to rescue an injured camel. I took a look and saw nothing at all. It was pitch black and I didn’t see anything running around and even looked up to see if something was on the plastic cover way above us. Nothing seemed to be there. In the moment I was peering around, everything was quiet. Was this “thing” aware of me at this point and playing dead? 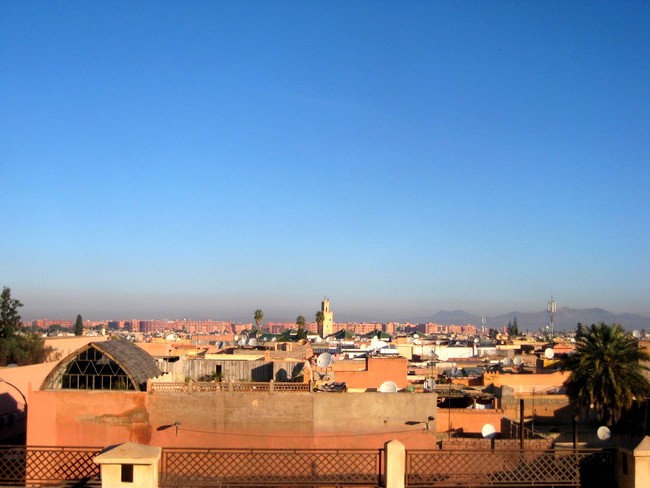 I asked my friend if I should take a picture looking down into the courtyard with a flash to try to see what is there since it was too dark to see otherwise. We decided that if there was a killer or a big scary animal, that they’d come running to our room if we drew attention to ourselves. So no camera. Then, I looked left and to my surprise, I saw the light was on in the man’s room next to us and the door was open! At this point, my friend and I got really scared and thought maybe the guy was a sleepwalker or a camel murderer or something. I mean, why is your light on this late and your door wide open? And where was he?

Now, we’d been awake for hours, shut our window and determined the lamp was our best weapon against the ghost/animal/creature/murderer. We stayed awake and vigilant until the 5:30 a.m. prayer in the mosque just next door. We figured if it was a crazy person, maybe the morning prayer might scare him straight. But no such luck because 5:30 a.m. came and went and the noise continued. We were convinced we were hearing an animal and when the staff goes down there come dawn, they were going to get a surprise. Or eaten.

We kept going over the facts we had and trying to not panic all the while trying to figure out what the hell we were hearing because sleep was out of the question. We knew we heard the clacking of what sounded like claws or nails on the tile floor, so we ruled out a hoofed animal like a donkey or a camel. We decided that a bobcat or some mountain tiger thing got into our riad. But how? Did it walk in? Did it fall in? How will it get out? These are some of the questions I pondered throughout my sleepless night. We stayed up until 7:30 or so when it got light out. I opened the window and to our surprise, I saw the “animal.”

This is where we both felt like complete idiots.

There, in the daylight, we heard the “animal” loud and clear and realized it was still extremely windy out. We saw the plastic cover/tarp and the side pieces that were hanging down and thrashing around along with the little metal rings hitting the iron posts of the plaster wall. These rings were the “animal claws” we were sure we heard. It was the wind the whole time! In the morning, the wind got really strong and was now a constant sound. During the night, though, the sounds happened about once every 20-30 seconds and to us, it could have believably been an animal/killer/ghost. Since we had no window that opened to the outside, we had no way of knowing how windy it was.

We spoke to the owner a little bit and told him the story. He apologized, but 1) there should have been a staff person AWAKE and present down below (we were told a staff person is on call but usually sleeps in the back) 2) a phone in our room. Yes, I know I watch too much Law & Order and Criminal Minds, but imagine if you were in the same situation. It’s funny what a tired imagination can come up with. 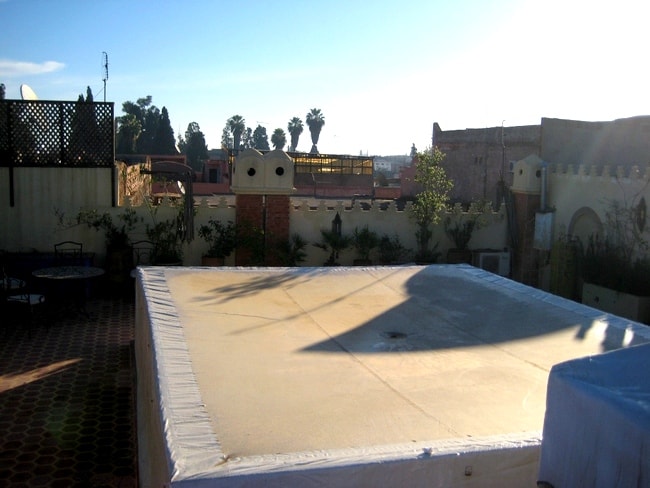 I’m laughing about it now, but at the time, being so tired, in a new land, no phone, hearing weird noises, and then seeing your neighbor’s door open and light on in the middle of the night, it was terrifying. Despite our lack of sleep, we managed to have a fantastic rest of our trip!

Ever stay in a riad in Morocco? Do you have an “I feel like an idiot” story from your travels? 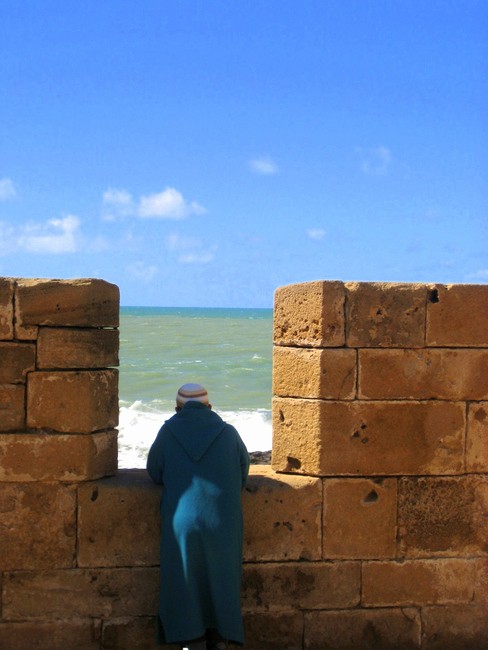 Oui In France was on French radio