Welcome to my new monthly column, France myth of the month, where I’ll take a look at a widespread stereotype and share my thoughts.

First up? Myth: All French people are thin…

When you think of French women, what comes to mind? Lithe model figures dressed to the nines? Skinny women who eat whatever they want and don’t gain an ounce? Well, sorry to break it to you, but that’s a total myth, folks…

So are all French people thin? Heck no. 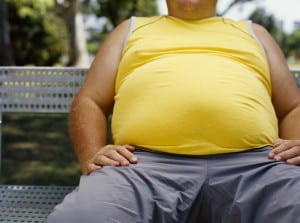 This one is realllllllly false. Just like anywhere else, people come in all shapes and sizes. Sure, some French people are thin, but others are fat and everything in between. Where we live, in a small city, people tend to walk a lot and we often see families taking Sunday afternoon strolls, couples getting their baguettes in the afternoon for dinner and just a lot of walking and physical activity in general. I will note that you rarely see obese people. I think I’ve seen one obese man since I’ve been here, whereas in the United States, it’s unfortunately a daily sight.

While France doesn’t have a major obesity problem, obesity rates are increasing. In France, the obesity rate is around 11 percent now.

What’s going on worldwide in regards to obesity?

According to a 2010 report entitled Obesity and Economics of Prevention: Fit not Fat, approximately 500 million people worldwide are obese which translates to roughly 1 in 10. Scary? This is worse:

…obesity rates have grown by 4 to 5 percent in Mexico and the United States, the country with the highest rate of obesity of any developed nation at 33.8 percent.

So what have we learned? That Americans tend to be bigger, in general, than the French. But that does not mean that all French people are thin. Or super models. Or anything close. Most people here are just normal looking and aren’t the stick-thin, modelesque figures seen on the pages of glossy magazines.

Myth of the month: The French are rude!