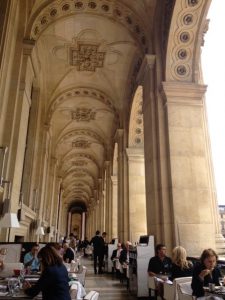 While most of you are probably off from work and barbecuing this 4th of July, it’s just another day in France. So for our own little holiday weekend, Tom and I drove to Paris to celebrate the 4th of July — but a little early. We didn’t do anything too patriotic, but we did enjoy ourselves in a city that seems to keep on getting better and better. 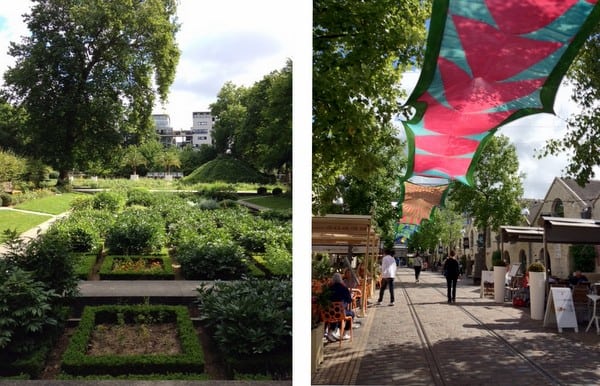 For our little 4th of July jaunt to Paris, we stayed at the Pullman Paris Bercy in the 12th arrondissement. The neighborhood was one that I hadn’t visited before and I absolutely fell in love. Calm yet still central, the Bercy Village area of Paris is my new favorite neighborhood. Complete with shops like Sephora and Starbucks and a big movie theater, the area has everything you need yet is still residential enough that you could run out of your apartment in fitness clothes and your dog and fit right in. The Parc de Bercy is a highlight of the neighborhood and has little gardens tucked away as well as big open areas for dogs and even fitness bootcamps. Wish I lived there so badly!! But it seems that apartments in the area go for about 10,000 €/m². Yeah, not cheap. It was nice to visit, though!

When in Paris, it’s a must for me to stock up on macarons because they’re THAT good. So we went to Laduree to buy a few gifts as well as Pierre Herme to do a little comparison shopping. Pierre Herme has a yummy peach/apricot seasonal flavor that’s sweet yet refreshing at the same time. Whose macarons are better? It’s really a toss up. A box from either place won’t leave you disappointed.

Also, during a stroll along the Seine, I snapped the pic below of the Josephine Baker pool. Swimming on a barge on the Seine sure beats swimming at your local YMCA, doesn’t it? And the one above is Tom’s panorama shot of the same area. 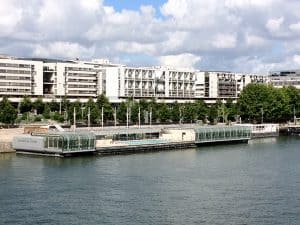 And I should also mention that it’s Les Soldes in Paris (and all of France) for the next couple of weeks, so we had to take advantage. Like Black Friday but for three weeks straight, Les Soldes are the only real sales France has and of course the French take major advantage. We didn’t find anything too amazing, but Tom did find a shirt at IKKS and some shoes at Zara. Not bad for the first week. The major markdowns are to come… 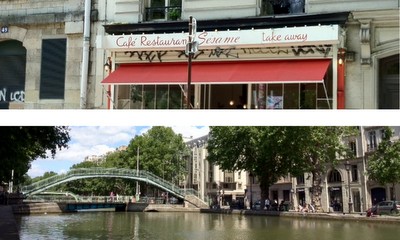 On Saturday, we had lunch at Cafe Marly which overlooks Le Louvre (pic at the very top of this post) and is a great spot to get something to eat if you’re in the area. Sure, the food is overpriced because it’s tourist central, but the setting can’t be beat. Then on Sunday morning, we had brunch in the 10th arrondissement at a place called Le Sésame, which I heard about from blogger Lindsey Tramuta’s New York Times piece “Brunch on a Budget in Paris’s 10th arrondissement.” We were pleasantly surprised and brunched on bagel sandwiches almost as good as New York’s, freshly squeezed juices, quiches and more. Totally hipster, refreshingly unpretentious and like something that you’d find straight out of Brooklyn, Le Sésame gets our recommendation if you’re in the area. Something to improve on? Get a bigger space! We waited 30 minutes for a table! (only about 10 tables total inside)

Les Soldes in France: Where to shop this July