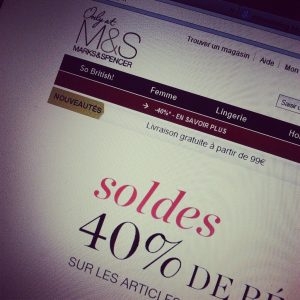 It’s that time of year again — the summer sales (les soldes) are here! In a twice yearly frenzy, the French flock to stores to buy everything from clothes to appliances to housewares and more. So what kinds of stores are my faves and how good are the deals during les soldes in France?

Read on for more on les soldes!

We just got back from the U.S. where sales were aplenty for no good reason at all. Americans who move to France might be in for a major shock when they realize that just about all of the time, the price on the tag is the price you’re going to pay.

As a promo code lover, this was hard to swallow and now I live for les soldes in France. And unlike previous sales where I was just browsing, this July will be different. We’ll have a list of things we’re looking to get deals on since a move is in our not too distant future. A dishwasher, dryer, couch and kitchen mixer are just the tip of the iceberg.

In general, each week there’s a new markdown which means you’ll pay less if you wait it out. The downside is that you’ll have less of a selection.

My advice is to buy what you want during the first week or two when the pickings are good if a certain size/model/color is important to you.

Also, unlike the U.S. where there will be storewide sales with discounts on everything, les soldes in France aren’t exactly like that. So what’s on sale? Only a portion of the inventory (current or past season’s models/styles) will be discounted, so forget getting 30%+ off on the latest model of something.

In my opinion, French clothes tend to be more expensive than American ones of equal quality, so when it’s les soldes time, that’s the only time I’ll buy something — and only if I really need it (otherwise buy from American stores during regular sales). I haven’t quite nailed down the French equivalent of U.S. stores I shop at, but the list below is a good roundup of places I like.

Here’s where I’ll be browsing and shopping for les soldes in France:

I live for online shopping. No lines, never closed and no fighting with people over what you want. This leading British retailer has branched out and has made its mark on France and around the world with 360 international stores. You’ll find a wide selection of men’s and women’s items at Marks and Spencer including clothing and lingerie along with housewares, specialty foods and other goodies with a touch of British flair.

Kookai is all about French fashion trends and here you can find cute, casual clothes that are pretty affordable. Geared toward women from 20 to 40 years old, the popular store’s eye-catching windows always pull me in. Favorite part of the store? The resortwear collection won’t steer you wrong.

Founded in 1987, this French clothing retailer tends to be on the pricier side but it’s worth it for the quality. With a hip line for men, women and children, getting a steal during les soldes in France will have you walking just a little bit prouder. I have my eye on this leather bag (that I don’t need). 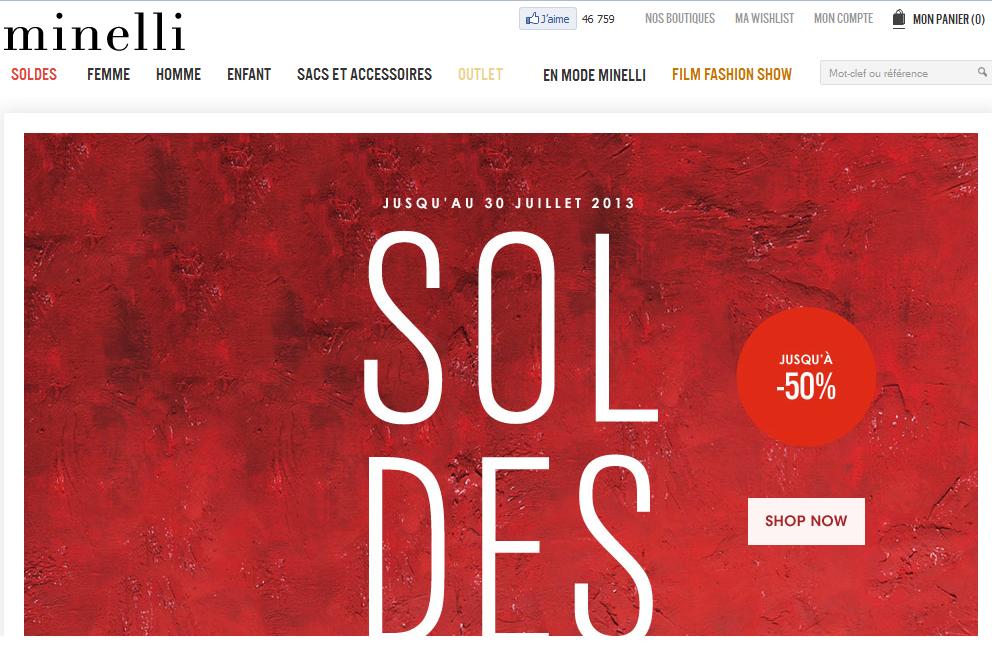 Trendy yet refined, Minelli shoe stores can be found all over Paris and in shopping centers in most French cities (and beyond). This affordable brand makes shoes for work and play and if you find yourself in Paris this July, they’re worth a look for every shoe-a-holic out there.

Another online shop I’ve been known to frequent is French mail order company 3Suisses. Whether you’re looking for towels, kitchen utensils, clothes or even kids’ toys, 3Suisses has just about everything you could dream of. Prices are reasonable and they often sweeten the deal by sending out coupon codes which make a discount shopper like me even more eager to head to the checkout.

Tell me, what’s your experience been with les soldes in France? Find any amazing deals?

Our 4th of July weekend trip to Paris

Ever shop at Noz?

How my shopping habits have changed since moving to France

« Gardening for dummies 101: Why I don’t garden
The dumbest things I’ve ever done »